The actor talks to Salon about his "Pornstache" character on "Orange Is the New Black," and why SVU fans hate him 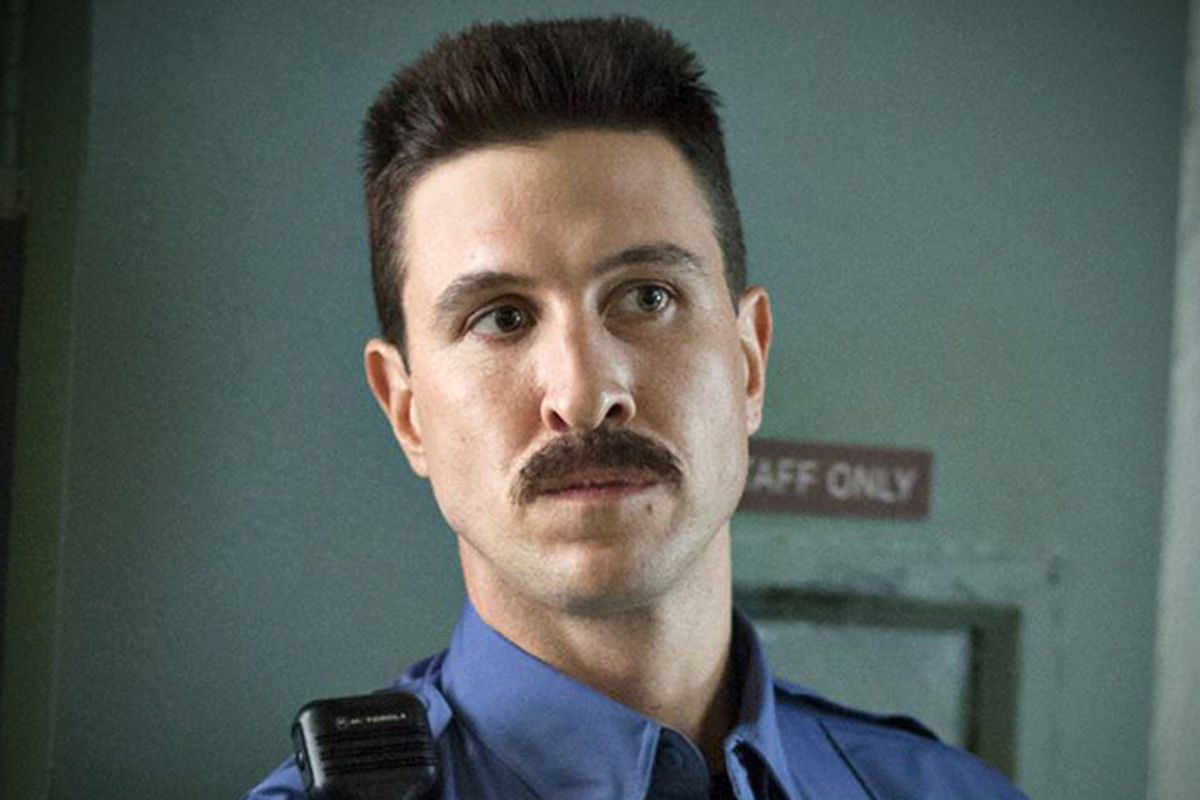 Pablo Schreiber as Pornstache in "Orange Is the New Black" (Netflix)
--

Any semi-regular TV viewer probably knows Pablo Schreiber as “that tall, good-looking guy who played that guy in that thing once.” The physical amalgamation of Luke Wilson and Christian Bale (with a dash of half-brother Liev’s genes thrown in for good measure), Schreiber has been making the Broadway and cable TV circuit for years, earning raves for his turn as earnest dock worker Nick Sobotka in "The Wire," as well as his performance as Demetri “The Sarge” Ravitch in the seventh season of "Weeds." Since the premiere of the new Netflix series "Orange Is the New Black," however, Schreiber, who plays prison guard George “Pornstache” Mendez, has achieved a new level of (not always positive) recognition.

As the pernicious Pornstache (so named for the character’s John Holmes-esque facial coiffure), Schreiber plays a bona fide sociopath who extorts, harasses and assaults the female inmates at every turn. Like the sadist that he is, Pornstache derives enormous satisfaction from inflicting pain on the prisoners; yet as the season progresses, there’s something appealingly vulnerable, even likeable, about the character. Despite his racist, misogynistic and all-around despicable behavior, Pornstache ultimately reveals himself, in one pivotal scene, as a guy who just wants someone to ask how his day’s going — and it’s Schreiber’s pitch-perfect performance that makes this transition from all-out villain to wounded antihero believable.

Since "Orange Is the New Black" premiered earlier this month, Schreiber has gotten his fair share of angry messages from fans (the fact that he preceded the role with another sociopath, murderer/rapist William Lewis in the season finale cliffhanger of "Law and Order: SVU," probably hasn’t helped matters). While Schreiber looks forward to getting back to the “good guy roles” (he’ll play one in the upcoming series "Ironside," which premieres on NBC this fall), for now he seems cool with being known as “the guy you love to hate.” Salon caught up with Schreiber to chat about prison reality shows, the rigors of prosthetic facial hair, and his "OITNB" character’s inexplicable sex appeal (well, maybe not that inexplicable).

So first I have to ask you something probably you’ve been getting nonstop since the show premiered: Is it real? Is the mustache real?

Was there ever a point during shooting where you’d go, like, pornstache-shopping on set, to find one that was adequately pornstache-y? Or was there, one set pornstache from Day One?

On the first day, we had some serious pornstache tests. I thought that the ’stache was – I was gonna go more for a handlebar thing, where it came all the way down, and Jenji [Kohan, the series creator] had a very, very specific look in mind with just the big, bushy top lip. So they went through a couple permutations. In the first episode, the one they had on was a little bit big and unwieldy and too thick. So it kinda got pared down from there.

I can imagine it would be difficult, from the perspective of a non-mustache-haver, to eat lunch on set with that thing on, or even act with it at first. I can’t even imagine having that thing on my lip for an extended period of time.

Yeah, the glue is not the most comfortable thing in the world. It’s a little itchy and not so fun. But you know, we sacrifice for our art.

So did you talk to any male prison guards at women’s penitentiaries at any point, or do any character prep in that vein?

No, I didn’t talk to anybody. Well, I talked to — first it was a counselor at a women’s prison, just to kinda get his take on what the COs were like and all that research, but no, for CO research I just watched "Locked Up" and all those nasty prison shows. There’s a great deal of material out there. They have all different regions of the country represented on those shows, so it’s a little bit easier than actually going and talking to people. You just put on your TV and Google it.

Was there any specific prison guard on "Locked Up" or something that sorta captured Pornstache’s ethos for you, that inspired the character?

No, it’s more – listen, shaping a character – I didn’t find a person I wanted to base the character on. Shaping a character is much more, for me, looking at who the guy is and why he behaves the way he does. The biggest thing for Pornstache is the idea of power, needing to have power over other people and how he uses that power. And he’s very sadistic. He likes to create hurt and pain in other people, he likes to watch people suffer. So it was all for me about finding out what it would take for me to have those desires, to watch other people suffer and to hurt people. Like all of those things, it all comes down to fear and insecurity, so just finding those places in myself.

That actually perfectly leads into my next question: We don’t really see Pornstache’s past. Like, he doesn’t get flashbacks the way we get for the prisoners. Did you develop a backstory for him, to kinda justify why he’s such an enormous asshole?

Not so much in the chronological Point-A-to-Point-B kinda way, in terms of “This is what happened to him, and this is why he ended up the way that he did.” More just in terms of the socio-emotional interaction way: Why would he need to do that? It comes out of fear and insecurity. Where does this fear and insecurity come from? So yes, I created a backstory for myself that created that level of fear and insecurity, that would create somebody who needs to compensate so hard for what he does.

What do you think explains his attraction to Daya [inmate Dayanara Diaz, played by actress Dascha Polanco]? That was sort of the redeeming moment for him this season. The fact that he has these unrequited feelings for an inmate gives him a little bit of humanity.

Well, we certainly saw any number of attractions. We didn’t have to get much of an explanation for his attractions. I think rather than just the attraction, the thing that took us by surprise with Daya was that he actually fell in love, or that he had feelings, and the story that was a genuine telling there was that this was a guy who spent all of his time alone and putting on a rough exterior for the world, and really what that was covering up was the idea that this guy actually just wanted people to talk to him, wanted people to ask him how he was doing, wanted people to pay some attention to him. And so his thing with Daya was that she was the first one of the prisoners to ever pay attention to him and to ask how he was doing.

I’ve seen a lot of people on Twitter talk about how much they love Pornstache, and how sexy they find him. Does that surprise you, that people consider this wretched, misogynistic, racist character a sex symbol, or that people enjoy villains so much?

(Laughs) I don’t know. I’m not sure if they’re enjoying the villain aspect of it. I’m not sure if they have weird attractions to mustaches. I’m not sure if they have some kind of masochistic tendencies and really just want someone to punish them. But yeah, there has been a huge outpouring of affection and attraction to Pornstache. But that being said, there’s also a large amount of hatred coming out for Pornstache, which is much more expected, ’cause he’s such an atrocious character. But yeah, it did take me by surprise a little bit that there were so many people who were strangely attracted to the man, seeing as I was doing everything in my power to make him as unattractive as possible.

So I actually saw your "SVU" episode today, where you play a sociopathic murder/rapist [the cliffhanger season finale, where Schreiber’s character abducts Detective Olivia Benson, played by Mariska Hartigay]…

Oh, boy, you’re just catching up on all the awful people, aren’t you? (Laughs)

Yeah, well, first of all, let me just say that I screamed for a full two minutes afterwards, because no one can do that to Olivia Benson.

Yeah, of course. I assume you’ve been getting that a lot since the episode came out?

Yeah, yeah. I think I may be one of the most hated men on Twitter right now. It’s all gonna turn around when I get back to my good guy roles, you know? Everyone’s gonna come around and realize that I’m not such an awful person, but now I’m willing to take it.

What do you think it is about you that makes casting directors be like, “This guy, right here, he should play this sociopath”? Or is it more that you’re just drawn to those roles?

Yeah, I don’t think there’s anything specific about that. My greatest desire as an actor is to keep people guessing, and not do anything close to what I did last time. It’s just a coincidence that the "SVU" thing and "Orange Is the New Black" came out around the same time. "SVU" is much quicker in turning their thing around, and I shot"Orange Is the New Black" a long time ago, and I did that "SVU" because it was so awful. I’m really compelled by human extremities, you know? The extremities of human behavior -- and those can include really obviously heroic characters -- have extreme human behavior, and obviously the other side of that is the villain. But I wouldn’t say that… I have a whole body of work that doesn’t involve being the villain. It just happens to be the moment I’m in right now. So my answer to your question of why casting directors see me as that, is that that’s just one aspect of how they see me, and hopefully I’m controlling how they see me a little more than just having them have impulses and throw me into things.

Do you like being seen in that way, or having your villain moment? Or are you looking to dabble in more likable roles after this?

Oh, definitely. I’m working on a show called "Ironside" now, for NBC. It’ll premiere a week after the "SVU" episode premieres, and I play a good guy in that. And yeah, definitely: since "Orange Is the New Black" and "SVU" I won’t be playing a really bad guy for a little bit now. Now I’ll be focusing on the other side of things to switch it up. The show I was on before "Orange Is the New Black" that was the last regular thing I did — I was in "A Gifted Man," and I played a shaman who was the epitome of the good and holistic and spiritual guide. There were comedic aspects of that character, but it was the flip opposite of any kind of evil or nasty, so it’s just my goal to be changing what I do and shifting people’s expectations as much as possible.