Jay Z and Lady Gaga are courting art-world cred -- but is that more easily bought than in times past? 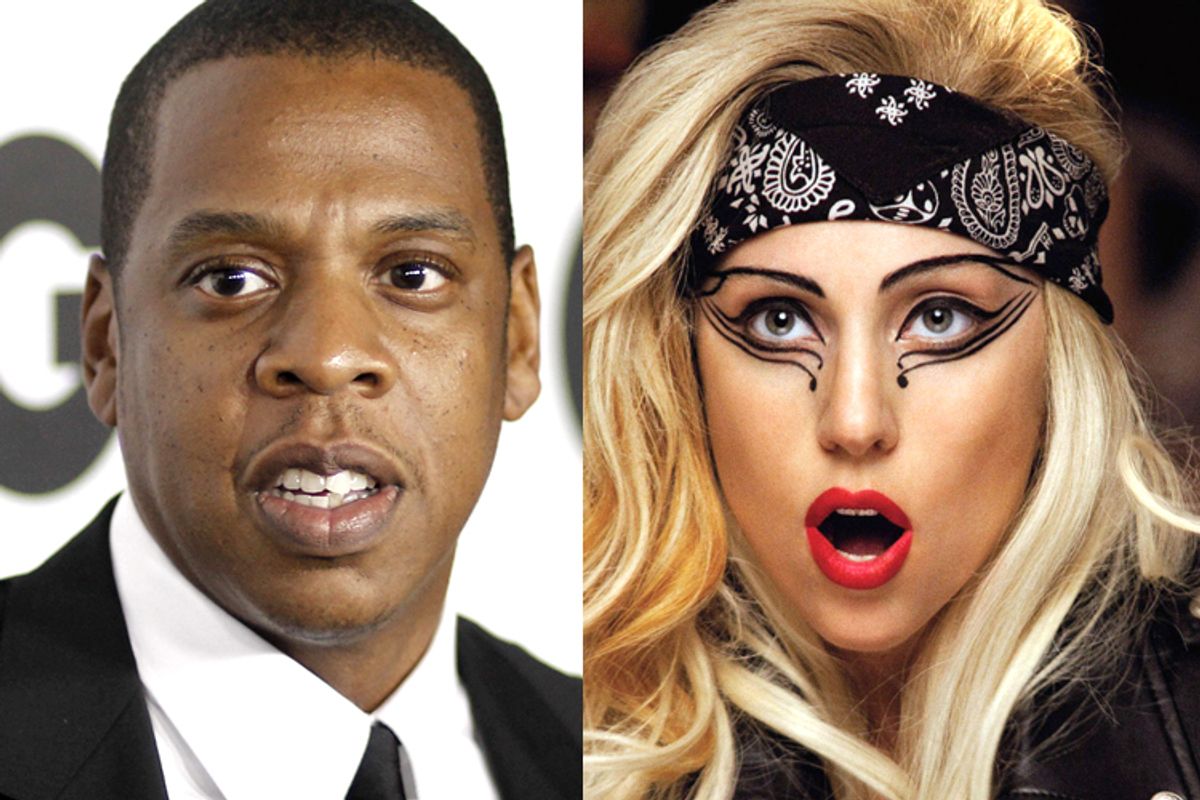 Sorry, Taylor Swift; move over, Lil Wayne. You guys are pop and rap stars, sure, but Jay Z and Lady Gaga are aiming higher.

The reigning king of hip-hop and erstwhile heir to Madonna have lately deepened their engagement with the art world. Jay Z's most recent album, "Magna Carta ... Holy Grail" features a song, "Picasso Baby," about his yen for "a Picasso [...] Rothko [...] Jeff Koons balloons"; he concludes that he's "the modern day Pablo, Picasso baby." To promote the record, Jay Z performed with performance artist Marina Abramović at the Pace Gallery in New York.

Meanwhile, Lady Gaga has emerged from a period of relative silence to announce the November release of her new record, "ARTPOP," which the performer's website indicated will "bring the music industry into a new age; an age when art drives pop." Unlike the trifles on the radio this summer -- "Blurred Lines"? So commercial! -- "ARTPOP" is conceived of explicitly as a performance art piece, one that will "bring ARTculture into POP in a reverse Warholian expedition." Her announcement of the record name-checks Abramović and Koons, along with avant-garde director Robert Wilson and high-end fashion photographers Inez & Vinoodh, who just shot a nude Gaga for V magazine.

Jay Z and Lady Gaga are hardly the only popular musicians to engage with the world of art and high fashion -- Kanye West and Katy Perry, for instance, have both dressed themselves in increasingly outré couture outfits and have both engaged the services of well-known artists to paint their album covers. But Hova and Gaga are by far the most explicit among the current set of music stars in their desire to reframe their work as something more than music, to turn performance into performance art. While this isn't new, at least in the latter case -- I wrote about Gaga's more-or-less successful attempts to break into the performance art scene in 2011, when she was promoting the album "Born This Way" -- the balance between musician and art-world figure has begun to shift in the direction of the latter. Do Jay Z and Lady Gaga even care if we listen to their records, or do they just want the admiration of art collectors?

The differences between Jay Z and Lady Gaga are instructive. "With Jay Z, it is very much a status marker," said Maura Johnston, a music journalist and the editor of Maura Magazine. "He's moved up in the world enough that he can afford these artists. Jeff Koons gets a lot of mentions." If Jay Z's stated interest in art resembles anything, it's the scenes set in Art Basel Miami Beach in Tom Wolfe's novel "Back to Blood"; it's strictly framed in consumerist terms, referencing the very artists who've so inflated the art market over the past decades. Jay Z's boasting about art as investment.

"Nearly all the artists he's cited are white men," said the art historian Amelia Jones. "Surprise, surprise -- that's where the money is." She noted that Jay Z's engagement with Marina Abramović was less the meeting of artist and fan than a predictable convergence of capitalist forces: "The art world is commodified anyway. It's not like Marina is free of the constraints of capitalism. She's happy to market herself in any medium available," including a recent HBO documentary about her work at the Museum of Modern Art.

"There's nothing hallowed or transcendent about any aspect of that."

But while Jay Z seems interested in ownership of art in the same manner he's interested in owning stakes in sports teams -- though he's "Picasso, baby," his focus seems to be on acquisition -- Gaga has a wide-eyed passion for creating art. Asked if Gaga, with her outlandish outfits and stagey stunts, was a performance artist, Jones demurred. "I don't know who would legislate that," she said. "Sure! If she wants to be! But I'm not sure who's going to be interested in that. It depends on how it's marketed."

The question of interest is the pivotal one; Lady Gaga has not released new music in two years, and her last album, "Born This Way," did not make the sort of splash it was expected to. "The success is very debatable," said Bradley Stern, who blogs about pop music at MuuMuse. "The fact that she front-loaded it with a sale that made it sell a million the first week and virtually none the next week inflated how successful it was. From a Billboard sales perspective, I don't know if she's on top as much as she was."

The album, whose promotion was far more drenched in the trappings of performance art than had been debut album "The Fame," also failed to produce any successful singles after the splashy "Born This Way" (you remember -- the one she performed at the Grammys after emerging from an egg). By the time she performed as her own male alter-ego at the Video Music Awards, the whole thing began to feel exhausting. "I'm wary of people saying 'I'm an artist,' rather than letting the art speak for itself," said Johnston.

"She always wanted to do these things and now she can," said Stern, citing Gaga's budget and her clout. "No matter how irritating that may be."

Both Jay Z and Lady Gaga, in their own ways, prove the degree to which art is, more than ever, available to the highest bidder. Thanks to their respective degrees of influence, Jay Z can effectively purchase Abramović's presence, while Gaga can style herself as Abramović's eager student. Describing Lady Gaga's pop-world forerunners, David Bowie and Madonna, Stern indicated that the intersection of art and music was more organic when the likes of Basquiat were struggling artists, not names that get over $25 million at auction. "Madonna was going to parties with them. It was a natural cohesion. They do feel more manufactured with Gaga."

The game is the same for these musicians as for any others in 2013: using some hook to elevate themselves above their competitors, just as Rihanna gaudily displays her wealth on Instagram or Rick Ross boasts about his criminal past in his music. It's merely the art world's willing collaboration that's changed the specifics for Jay Z and Lady Gaga. Said Johnston: "She's elevating her art above a Katy Perry or Rihanna by name-dropping people. These are signifiers of a sort of class -- either on an economic level, where you can buy and sell art, or having enough leisure time to appreciate artists."

Time will tell whether or not "ARTPOP" is successful, but the bet seems to be paying off for Jay Z. "Magna Carta ... Holy Grail," helped by a distribution deal with Samsung, had the second-biggest sales week of the year. And though reviews for the album were mixed, his appearance at MoMA was almost universally treated as fresh and exciting. Next stop, perhaps, the Louvre.