The Maker economy can't fix everything

3-D printing and homemade crafts may spark a new Industrial Revolution. But that doesn't mean prosperity for all 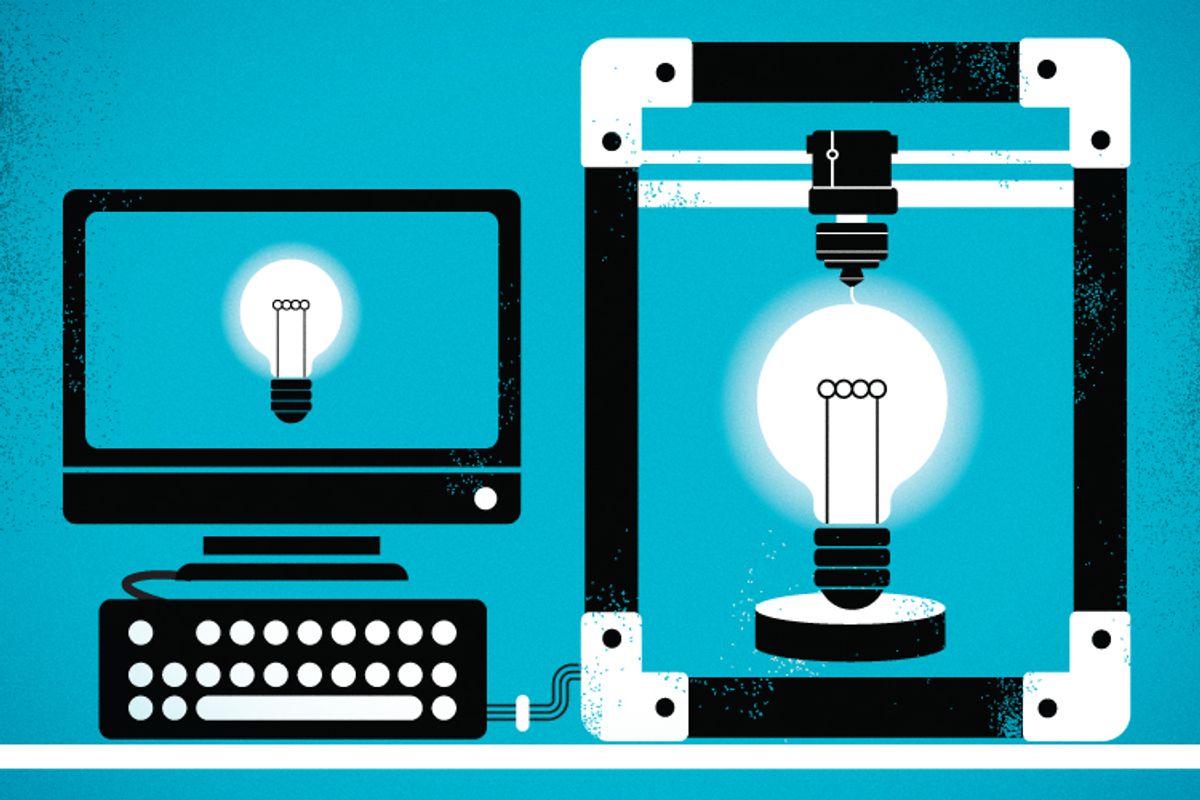 It was a headline no self-identifying Maker could refrain from clicking: "3-D printing will explode in 2014, thanks to the expiration of key patents." The news confirmed every wild hacker hope about the future of do-it-yourself manufacturing. Costs will fall, quality will improve. If you thought that your $1,500 MakerBot 3-D printer was cool, just wait until next year, when you will get your greedy hands on a $500 Chinese equivalent capable of fabricating widgets that are twice as nice.

So here comes the Third Industrial Revolution! A 3-D printer in every garage! That old mass production paradigm, where everything gets outsourced to the country with the cheapest labor? Busted! A new era of creative empowerment is just around the corner. Manufacturing has been democratized, and nothing will ever be the same.

Yep, more than a few container-ships packed to the gills with hype have accompanied the rise of 3-D printing and the "Maker economy." But there's a reason for that, as anyone who has spent time wandering through the excited hubbub of a Maker Faire knows. Comparisons with those heady days when the Homebrew Computer Club hackers shared their early personal computer knowhow are not misplaced. The world changed in extraordinarily profound ways after computing power spread from the mainframe to the people. The same could well be true when manufacturing power moves from the assembly line to the living room. 3-D printers are cool. Makers totally rock.

Some of the more extravagant dreamers envision a future in which 3-D printing and the rise of the Makers go so far as to reverse the outsourcing and offshoring trends associated with globalization and smash the whole existing structure of mass production. Armed with our 3-D printers and capital raised from our favorite crowdfunding startup, we will all become artisanal producers living off the individual, unique fruit of our own labors. Call it the Etsy model of capitalism, except with the 3-D printer replacing the sewing machine or glass blowing torch as the construction tool of choice. In the Maker future everyone can be a craftsperson.

Well, certainly, some people will. Etsy, the online marketplace for handcrafted goods, reported a little under a billion dollars of gross merchandise sales in 2012, registering 70 percent growth over 2011. If you have creative talent and drive, the 21st century may well turn out to be the most empowering period of human history. Access to technology and capital are just a click way. If we accept one of Karl Marx's key insights -- that "ownership of the means of production" determines the class structure of society -- then 3-D printing and DIY culture threaten to annihilate archaic class distinctions. The means of production is about to get a lot cheaper. Makers have got it made.

But what does that mean for the larger economy, or, more importantly, for the distribution of wealth created in the new Maker economy? In a world where technological progress is inseparable from growing income inequality, stagnating wages and a squeezed middle class, how does the Maker movement fit in?

A close look at the size and distinguishing characteristics of the Maker economy, right now, offers some distressing hints. Despite the hype, it's going to be quite a while before the global manufacturing status quo is overturned by 3-D printers. Meanwhile, the people who are the most likely to make the most out of their dirt-cheap 3-D printing technology are exactly the same people who have already been benefitting the most from previous technological advances: the well-educated, scientifically literate, upper-middle class will have awesome new toys to play with. Everybody else, most likely, will keep scrambling.

The Maker movement is "as significant as the shift from agriculture to the early industrial era,” says Jeremy Rifkin, a Wharton economist.

Bold words, and this early in the game, it's impossible to definitively say Wharton is wrong. But the shift from agriculture to the early industrial era was also characterized by the accelerated growth of cities and the creation of a huge middle class. What's the "third industrial revolution" going to accomplish?

And just how big is the Maker economy anyway? Recent Maker Faires in New York and California have been attended by around 100,000 people over a weekend. How does that translate outside of the fairgrounds? I figured the best person to ask was Dale Dougherty, the publisher of Make Magazine and originator of the Maker Faire. As much or more than any single person, Dougherty is responsible for entrenching the "maker" meme in contemporary popular culture: this notion that do-it-yourself values and new technology have facilitated the creation of a whole new class of creative people. (Disclaimer: Dale Dougherty also gave me my first job in online journalism, as a writer for Web Review way back in 1995.)

Dougherty told me that it has been "a struggle" to quantify a grass-roots, hobbyist-fueled phenomenon like the Maker economy. But in a recent whitepaper commissioned by Maker Media, the total size of the Maker economy is estimated at $300-400 million "with a potential to reach $1 billion by 2015." A survey of makers found the community to be 57 percent hobbyists, 33 percent professional and 10 percent commercial.

The 3-D printing market is larger. The gold standard review of the 3-D printing industry is published each year by Wohlers Associates. The most recent report pegged the market for 3-D printing products and services at $2.2 billion in 2012, and predicted that total would rise to $5.2 billion by 2020.

No question: these markets are exploding with exceptional speed. According to Wohlers, the overall market for 3D printing products and services has been growing for years at a compound annual growth rate of between 25 and 30 percent. The market for low-cost (under $5000) printers is accelerating at an even more phenomenal rate, growing 346 percent per year from 2008-2011.

MakerBot, the pioneer of low cost 3-D printing, generated revenues of $15.7 million in all of 2012, and $11.3 million in just the first quarter of 2013. (In June, MakerBot merged with one of the biggest players in 3D printing, Stratasys -- one of the companies, incidentally, whose patents will start to expire next February.)

A billion here, a billion there, at the growth rates witnessed over the last couple of years? Pretty soon it's all going to add up to something pretty special. But let's take a step back. The overall value of the U.S. manufacturing sector is a tad under two trillion dollars. China is in the same ballpark.

"It’s difficult to know whether 3-D printing will launch another industrial revolution," Terry Wohlers told me. "Many of the ingredients are in place, but you are right: it would need to grow a great deal more to make a sizeable 'dent,' given the current size of the manufacturing industry."

For the Maker economy, it's a long, long way from here to there. We've seen some extraordinary technological shifts over the last 30 years, but disrupting the economy of manufactured things isn't likely to happen with the same speed that the economy of manufactured information has been transformed. It won't happen overnight. There are serious questions about whether 3-D printing will ever scale up to compete on a cost-effective level with global mass production supply chains. Yes, we will be able to manufacture replacement parts for our busted toasters and we will rapidly prototype our crazy new inventions, and the possibilities of sharing the fruits of a huge world full to bursting with open-sourced, digitally distributed 3-D designs will be the coolest thing ever (and also a little scary).

But for the foreseeable future, the numbers suggest we're still looking at a niche. And we already know that technological progress, in general, is exerting negative pressure on the number and quality of jobs available to middle class workers. If robots automate all the factory floors of the world, will enough people be able to earn their livings from artisanal 3-D printing craftsmanship to make up for the slack?

But that leads naturally to the next question about the Maker economy: Who, exactly are the people that are thriving most in this new world? What are the demographics of the Third Industrial Revolution?

According to a survey conducted by Maker Media, 8 out of 10 Makers are male. Their median age is 44. Their average household income is $106,000. Nearly 83 percent are employed, and 31 percent have job descriptions that fall into scientific or engineering categories. 97 percent are college graduates and 80 percent have some post-graduate education.

If you were looking to identify the group of people who already are best positioned to prosper in a stratifying economy that disproportionally rewards individual productivity and educational attainment, the data accumulated by Maker Media hits the bullseye. This is an awesome demographic to target conferences and magazine advertising dollars at, but it's also the demographic that needs the least help to do well in a world economy growing ever more brutally competitive.

Thirty-five years after the Homebrew hackers started gathering in Silicon Valley -- a group of mostly white males who happened to share an awful lot of demographic characteristics with current Makers -- we've seen extraordinary advances in the amount of computer processing power accessible to everyone. But we've also seen scant evidence that the economic growth and productivity generated by those amazing advances is being widely shared.