The city didn't die when white flight hit in the 1960s. It became a bastion for black families like mine 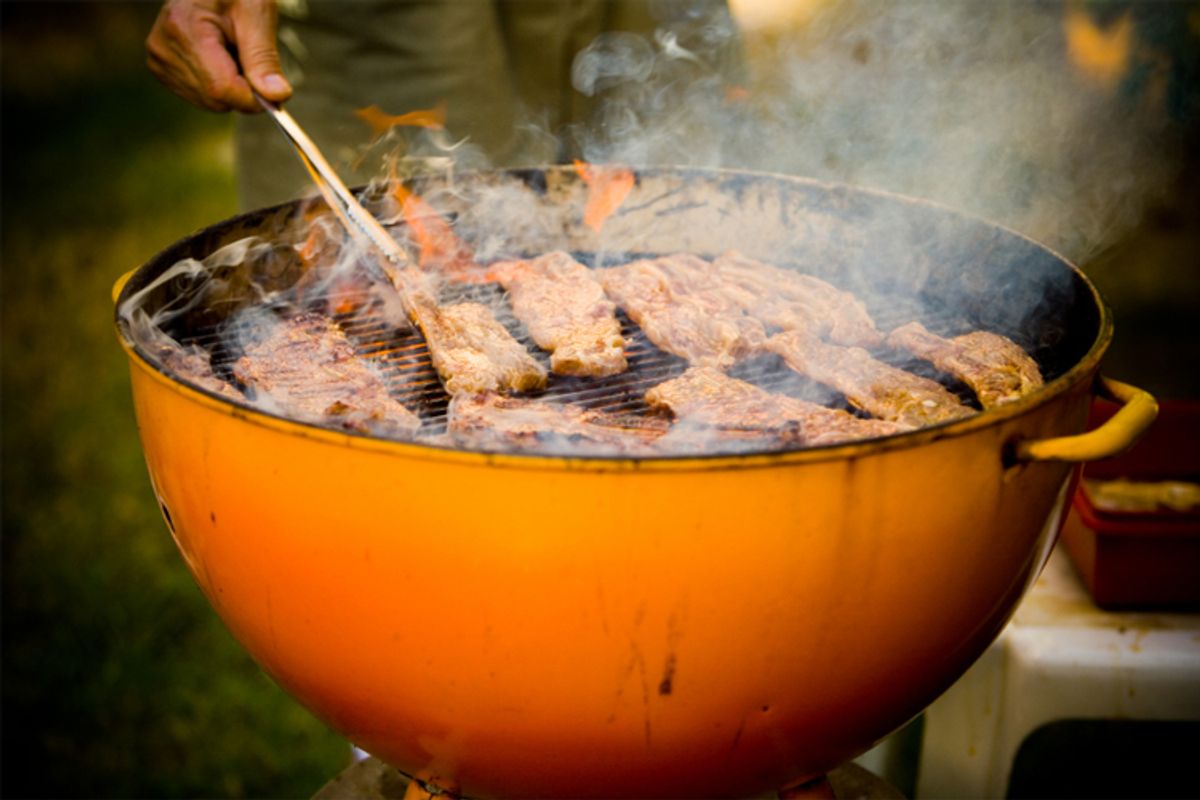 Growing up in the 1970s, summers were everything. My mother’s garden was in full bloom, and it seemed every day brought new bounty, ripe for harvesting – tomatoes, strawberries, cucumbers, even grapes that were too sour for snacking, but perfect for making jelly and homemade wine. Every Fourth of July, my uncle and his family would come in from Chicago. Uncle James always brought his hand-crank ice cream maker, and we kids lined up for a turn at the crank. Daddy would buy a case of ribs, but Uncle James always brought his own from the Chicago butcher shop he managed. I never tired of listening to my mother and her brother argue over the best way to season and cook ribs. While the ribs were on the grill, we would play Motown hits on the record player another cousin brought over for the occasion.

You might be surprised to learn that this idyllic scene happened in, of all places, Detroit.  Ever since Detroit filed bankruptcy, the Internet has been flooded with articles describing what went wrong in the city – most of them devolving into political finger-pointing.  Still, the common narrative paints a clear path to ruination: Detroit’s decline began in the 1960s and was hastened by the 1967 riots and white flight, from which the city never recovered. The 46 years between 1967 and 2013 are treated as mere ellipsis points.

I grew up in the Detroit that the common narrative gives up for dead – Detroit as it existed after the 1967 riots, white flight, and the end of auto manufacturing jobs. The Detroit of my childhood was a city of more than one million people who thrived, for a time, despite being reviled by our suburban neighbors and given up for dead by the national media.

My parents were born in Mississippi, raised on farms that were owned by their families for generations. Their families left the South not because of Jim Crow, but because subsisting on the income generated by a small farm was impossible. My father worked as a spray booth attendant in Ford Motor Company’s River Rouge plant for nearly 40 years before he retired in the early 80s. He was fortunate to retire with a full pension and benefits. Those union-won medical benefits came in handy as he faced post-retirement medical problems. Years of breathing in paint fumes and asbestos at the plant likely aided in cutting his life short at age 71.

The eight of us – my parents and their six children – lived in a house on Detroit’s northwest side that my father bought from his mother. Ours was a neighborhood of working-class families. Most of the fathers – and a few of the mothers -- worked for the Big 3 in some capacity. Factory jobs made up the largest share of private sector employment for people who, like my parents, had at most a high school education. Most of our neighbors were married couples with children. Many of the fathers had served in the armed forces, like my dad; most of the mothers, like my mother, were part- or full-time stay-at-home-moms. Black middle-class Detroiters weren’t just “like” America – we were America.

Thanks to white flight, black families were able to move into neighborhoods they’d previously been shut out of. The teachers and administrators of our neighborhood public school were white, but the majority of the students were black. My mother was a constant presence in my school and a member of the PTA. Thanks to her active involvement, my siblings and I received quality education in the Detroit public schools we attended.

In the 1970s, American auto manufacturers blamed their decision to send manufacturing jobs overseas on the greed of the UAW -- the same union that had forced the auto industry to implement safety measures and fair labor practices Americans now take for granted. We Detroiters, like most Americans, knew the real problem was that Ford, Chrysler and GM continued to produce big, muscular, gas-guzzling cars instead of the smaller, fuel-efficient vehicles people wanted. Still, my father was troubled that his children preferred European and Japanese cars -- not because of jingoism, xenophobia or loyalty to Ford. He was concerned because people who drove foreign cars in the Detroit area were sometimes attacked, and their cars vandalized.

Polarized racial politics was a big part of growing up in Detroit, but on a day to day basis, we thought very little about race. In a city that was predominantly black, within our own communities, we were judged simply as people. But we read every day in our local newspapers what white suburbanites thought of Detroiters and the man who was mayor for much of my childhood, Coleman A. Young. It was clear that suburban whites hated Young and would never support the city as long as he was mayor. Curiously, white suburbanites’ hatred of the black city in their midst wasn't considered racist, though black mistrust of white politicians and business leaders was. Sadly, the debate over whether Detroit “deserves” support from the State of Michigan continues today.

While white suburbanites refused to come into the city, we were determined not to be confined strictly within the city’s boundaries. As Detroit’s shopping districts dried up, we ventured into suburban neighborhoods once considered off-limits for black people. When my sister was looking for a prom dress, she set her heart on going to a bridal shop in Grosse Pointe that she found in the Yellow Pages. My mother thought our going to Grosse Pointe was a bad idea. Black people always faced the lingering threat that we could be attacked by whites for being someplace we didn’t “belong.” If whites were afraid of us, our fear of them was just as acute. But my sister insisted. She made an appointment, and I volunteered to go with her.

The woman who ran the shop seemed surprised when two black girls walked through the front door. But the shopping trip was fairly uneventful. My sister was treated just like any other customer, found her perfect dress, was fitted, and paid for it. Emboldened, we explored wealthy Oakland County enclaves like Bloomfield Hills, Birmingham and Troy. Detroit might not be bankrupt if whites had been as willing to spend their dollars within Detroit’s city limits as blacks were willing to spend our dollars outside of it. The deleterious effect of Detroit’s economic slide on suburban communities is real, though absent from most national reports.

By the time I graduated from college in the late '80s, my parents’ neighborhood had taken a turn for the worse, thanks to the crack epidemic and gang violence. Young men with few other employment options – men who, in earlier generations, would have gone to work in the auto factories -- turned to the drug trade. As the elders died and their children moved out, the character of my parents’ neighborhood changed from middle class to poor and increasingly crime-prone. Leaving was a must, and college was the ticket out.

Michigan had a wealth of world-class colleges and universities within miles of Detroit’s city limits – including my alma mater, the University of Michigan, which was only a short 45-minute drive from home, but a world apart. The problem was, there was nothing to come back to after college. Entry level management jobs at the Big 3 were scarce, and there were few other private sector opportunities for newly minted college graduates. For the most part, staying in Detroit meant working in the public sector – as teachers, social workers, court clerks and the like. My siblings were among the growing number of black middle-class Detroiters who vacated the city for jobs and homes in safer suburban neighborhoods. Like so many of my classmates, I accepted an out-of-state job offer and left Detroit altogether after graduating from U-M. The loss of Detroit’s best and brightest hurt not only Detroit’s economy, but the state economy as well.

My mother was one of the last holdouts in our old neighborhood. She had left her family land in Mississippi as a young woman, then spent decades battling squatters who tried to lay claim to it through adverse possession. She was not to be budged from the place she’d called home for 50 years. She got to know the new people on the block and treated them as they were – as people with problems, not people who themselves were problems. When my mother died, the neighbors who had looked out for her in her later years, as she did for them, were among the many who paid their respects.

The causes for Detroit’s current economic situation are legion. Republicans and Democrats, blacks and whites, and public and private sector interests all bear a share of the blame and a share of the responsibility for finding a sustainable solution. And in order to move forward, the residents of Detroit and the suburbs that used to champion Detroit’s downfall need to unite as allies in a common struggle – to save not just the city of Detroit, but the state of Michigan along with it. That alliance begins with recognizing that Detroit occupies a unique place in America – one of power, hope and strength, not failure.