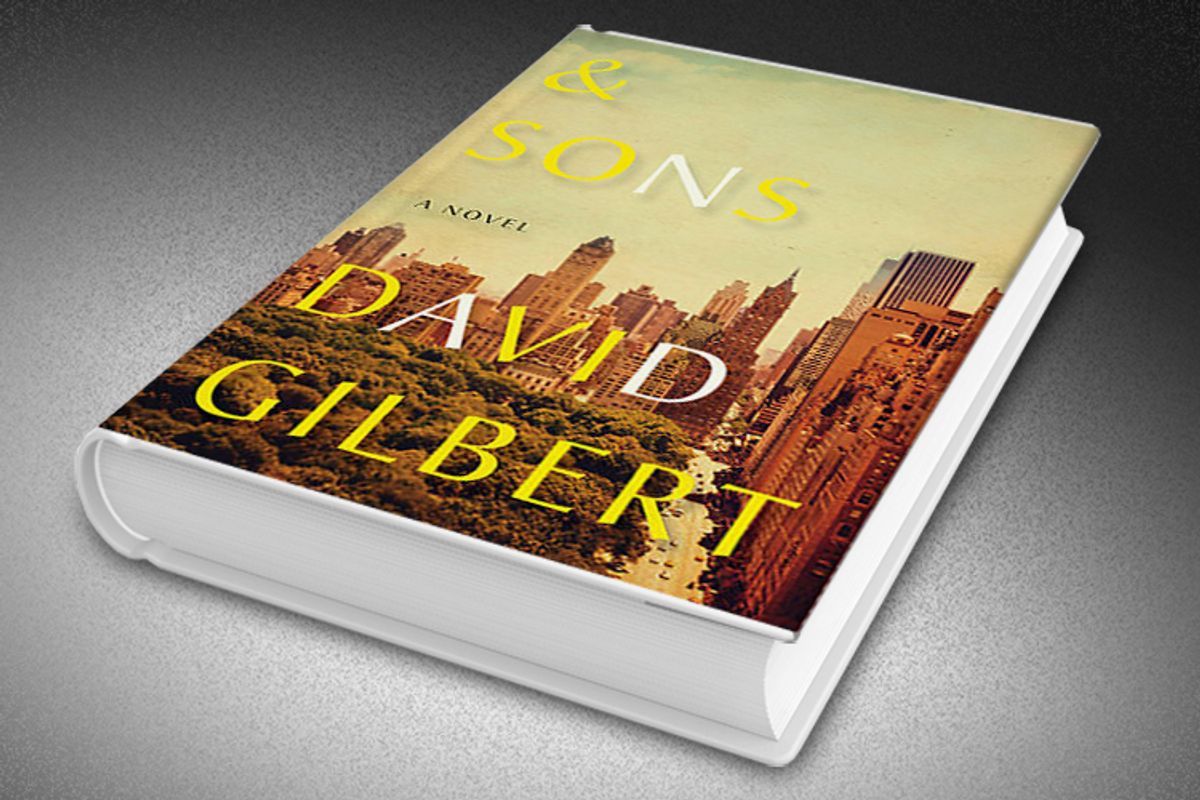 A novel about a novelist is a notoriously bad idea; it's hard to find anyone willing to defend the practice. On the other hand, since most of the people who read literary fiction these days are novelists (or aspiring novelists), the author of such a book can assume a base level of narcissistic interest on the part of his audience. Writers are fascinated by other writers, especially the great ones, and endlessly interested in the torments, real and alleged, of the creative process. Whatever they may say to the contrary, their hands reliably creep toward books that profess to do justice to both. David Gilbert's new novel, "& Sons," is a novel designed to burn their fingers.

It's the story of one father and several sons: two standard issue, one of murky provenance, and one wannabe. The father is A.N. Dyer, a Salingeresque figure, author of at least one classic account of boarding school angst and cruelty, "Ampersand," but also of thirteen other novels, many of which are cherished by avid fans. In his seventies as "& Sons" begins, A.N. shambles around a gently mouldering duplex on the Upper East Side of Manhattan, tended to by a faithful Nordic retainer named Gerd and hovering over his youngest son, Andy. He hasn't published a book for at least a decade: "It seemed a vital piece had gone loose in his brain and he could feel the bit rattling around, a temporal gear that had slipped its carriage and no longer stamped thoughts into proper words and sentences."

Andy is one reason why A.N. is such wreck. His beloved wife Isabel left him when he confessed to fathering the boy in an affair with a Swedish au pair, a young woman who promptly died without any surviving family to take the child in. As for A.N.'s two adult sons, Richard and Jamie, the novelist managed to alienate them in other ways. Both Richard, a recovering addict who has scraped together a solid family in California, and Jamie, who has spent his life roaming the globe filming raw footage of terrible events for no particular purpose, both regard their father as a catastrophic parent -- distant, critical, tyrannical, occasionally exploitative (he steals material from Richard's journal for one of his novels) and yet also self-pityingly sentimental. For his part, Andy is annoyed and smothered by his father's "neediness," the way the old man stares "at Andy like he was the only route toward salvation. 'You are a wonderful boy,' his father would say. 'I just want you to know that I love you, very much.'"

These four characters -- Richard, Jamie, Andy and the grotesquely self-involved A.N. Dyer -- are the novel's core, convincing even in their extremity and snapping with life. The fifth figure in the tableau, the Nick Carraway of "& Sons," is Philip Topping, the son of A.N.'s boyhood friend and an aspiring novelist himself. The book opens with the funeral of Philip's father, a ceremony in which A.N. makes a rare public appearance, reading a eulogy he has partly cribbed from the Internet. Outside, Dyer fans congregate, clutching books they hope (in vain) to have signed, "a polite group, like servers offering up trays of unwanted canapes." Philip is not much more wanted, yet somehow he finagles his own wrecked life (affair with a J. Crew salesgirl, departed wife and kids, lost job) into an invitation to move into the Dyer duplex "until I get on my feet."

If A.N. is a portrait of the great writer as failed human being, Philip is an even less appetizing specimen, the failed writer as negligible, even shadowy human being. "I knew I could be a good son, the right son, to this great man," he tells himself, having grown up fantasizing about being left an orphan in A.N.'s charge. Now the fantasy has sorta come true, and Philip wonders "Would I share meals with the man, conversations, favorite books and movies, latest pages of our writing? Would we drink and smoke and talk late into the night?"

I doubt it's much of a spoiler to say they will not, but while Gilbert seems to be setting up a drama of filial rivalry and great-man fetishism, that is not what "& Sons" turns out to be. A peculiar and not readily decipherable element of the novel is that some passages are narrated by Philip in the first person, while others are told from the point of view of the other characters, describing thoughts, feelings and events Philip could not possibly know about. Is the entire book meant to be Philip's imagining of the Dyers' personal and inner lives? If so, he doesn't seem capable of it; a "writer" whose "hypothetical novel" consists of no more than its imagined "exterior heft," dedication, acknowledgments, blurbs and accolades -- the egotistical bling of writing, rather than the substance of art -- could not have produced this rangy, prickly, easy brilliance, or given it such penetration and depth. "Where am I?" Philip asks the reader at one point. "Do you even care? Or am I blocking your view?" We don't and he is, but fortunately he doesn't take up too much space.

On the level of craft, Gilbert has a fetching way with similes: streamlined, shipshape figures that never commit the sin of trying too hard. The atmosphere in the Dyer duplex is colored "with uncertain guilt, the furniture sitting about like characters in an Agatha Christie mystery." An archivist pitching his institution to Dyer and his agent shows an enthusiasm "honest, yet annoying, like a high-end seller of men's apparel." Philip thinks of his own reserved father as "always quiet yet genial, like a foreigner who could only respond with a few common expressions." Here's how Jamie begins to fall in love with a longtime friend (with benefits) after he makes a joke about a sexual experiment that fizzles: "And thank goodness she laughed, and his heart seemed to gain a door and become a house."

Much of the edge of this novel comes from its jaundiced portrait of the fading dregs of haute-preppy society, from which the Dyers spring. In a merciless little sketch of A.N.'s blend of self-hating snobbery, he has the novelist size up the archivist and conclude, "he came from nowhere, one of those self-made intellectuals who modeled themselves on the type of Ivy-Leaguer Andrew so disliked: the premeditated WASP." Richard, who has made a sincere attempt to abandon this milieu, nevertheless finds himself rubbing shoulders with its diaspora in Hollywood, what he calls "the Moveable East, innately privileged yet no longer happy with the idea of simply making money, pseudo-creatives who embraced the business of Los Angeles, with its ease of living and its lifestyle of plausible deniability."

The death of Philip's father triggers a crisis in A.N. He recalls Richard and Jamie -- the latter pulled away from a time-lapse photography project of appalling morbidity -- to New York. Meanwhile, young Andy, on a break from Exeter, conducts a flirtation with his dad's publicist's assistant (an older woman of 24) and otherwise embarks on the sort of ebullient Manhattan adolescence made iconic by everyone from Salinger to Whit Stillman to "Nick and Norah's Infinite Playlist." Pretzels are eaten in Central Park, a posh book party is attended, joints are smoked, new friends are made and the possibility of Andy finally losing his virginity lies around every corner.

But just as A.N.'s sons seem to be escaping the tendrils of his titanic dysfunction, he presents Richard and Jamie with a bizarre revelation. One theme of "& Sons" is the desperate narcissism of genius -- although blaming A.N.'s awfulness on his work strikes me as a cop out, and an unfair knock on novelists as a class. Who can prove they've got a higher per capita rate of selfish jerks than any other profession? Besides, the right novelist can turn even a novel about a novelist into a book big enough to delight all the rest of us.