Welcome to the new American exceptionalism: Number one in obesity, guns, prisoners, anxiety and more ... 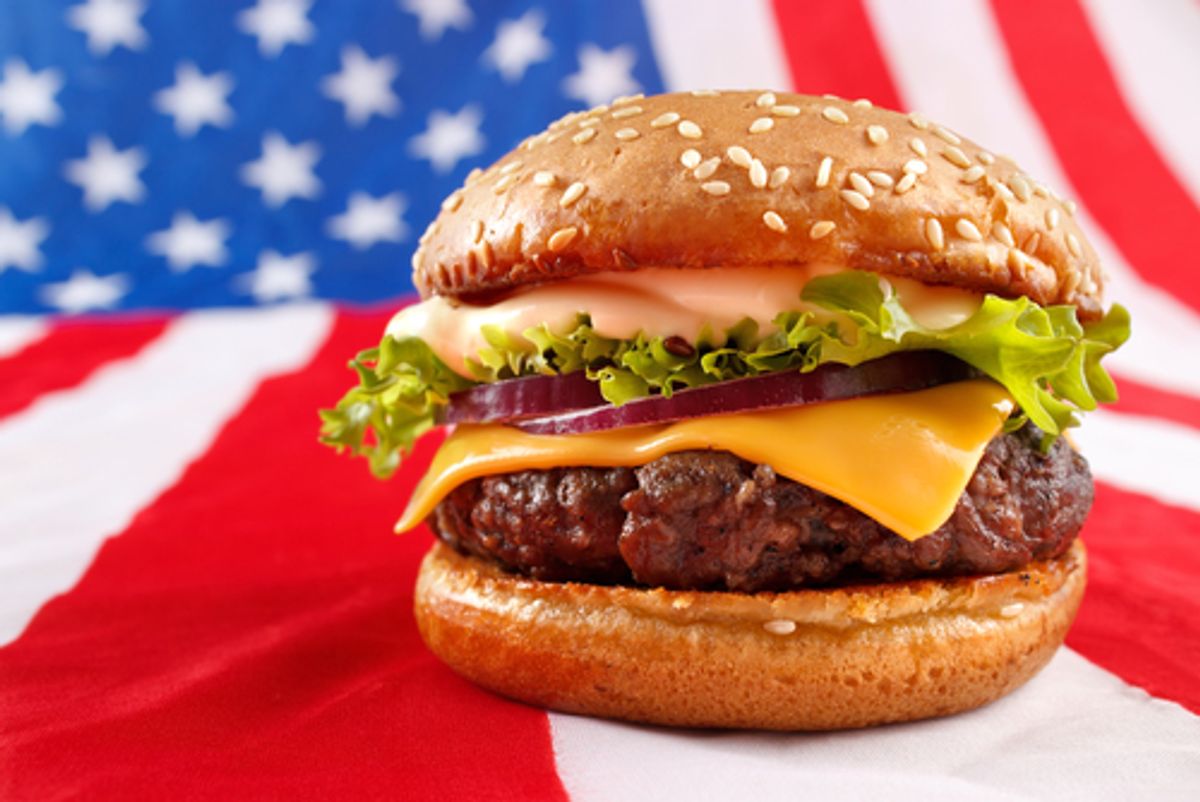 People uninterested in change and progress tend to cling to the jingoistic fantasy that America is an exceptional country. Often this implies that the U.S. is somehow superior to other nations. Some, like the neocons, have taken the idea of exceptionalism to mean that America should be above the law and that other countries should be remade in our image. Others, like conservative evangelicals, believe that America's supposed exceptionalism is God's will.

In recent decades, America has indeed pulled ahead of the global pack in a number of areas. But they aren’t necessarily things to go waving the flag over or thanking Jehovah.

1. Most expensive place to have a baby.In the U.S., having a baby is going to cost you, big-time, before you even get that bundle of joy home. The New York Times reports that on average, a hospital delivery costs $9,775 — and make that $15,041 if you’re having a Cesarean. No other first-world country on earth expects new parents to shell out that kind of money just for the privilege of procreating.

You might think insurance would help. You’d be wrong. A staggering 62 percent of private plans come with zilch in the way of maternity coverage. Mothers-to-be are dragged through what the Times calls “an extended shopping trip though the American healthcare bazaar” where they try to figure out the cost of things like ultrasounds and blood tests. Pricing is often opaque and widely variable, and it’s common for mothers to receive treatments they don’t necessarily need. Even when insurance does cover maternity care, between the deductibles and co-insurance fees, women can expect to shell out thousands in out-of-pocket expenses: an average of $3,400.

Do American mothers get some kind of unusual care for all that dough? Nope. They receive the same services moms receive in other first-world countries; they just pay for them individually and at higher rates.

2. Obesity. The U.S. has been ranked as the most obese country in the world, though a recent report by the U.N. says that Mexico is pulling ahead of us. Not surprisingly, obesity is considered a national health crisis and contributes to an estimated 100,000 to 400,000 deaths in the U.S. per year. In 2010, the Centers for Disease Control and Prevention reported that 35.7 percent of American adults are obese, and 17 percent of American children. More than two-thirds of American adults are either overweight or obese.

Americans are ballooning for a number of reasons, including our fondness for fried food, sugary drinks, cheap, pre-packaged foods, processed meats, our sedentary lifestyle, particularly television-watching, too little sleep, and a lack of exercise. Obesity is associated with diabetes, heart disease, complications in pregnancy, strokes, liver disease —the list goes on and on. The obesity epidemic is also responsible for increased healthcare use and expenditures. Kentucky is the most obese state, and Colorado is the least obese.

Researchers predict that the cost of obesity in the U.S. is likely to reach $344 billion by 2018.

3. Anxiety disorders.Americans are freaking out. Researchers have looked at the prevalence of various types of mental illness around the globe and found that the U.S. is the world champion in anxiety. According to the 2009 results of the World Health Organization’s World Mental Health Survey, 19 percent of Americans were found to experience a clinical anxiety disorder over a given 12-month period. The National Institutes of Health puts the number at 18 percent of adults, which means that at least 40 million Americans are suffering.

Researchers have found that anxiety disorders, which include several varieties such as generalized anxiety disorder, obsessive-compulsive disorder, and post-traumatic stress disorder,take a tremendous toll on the population. Often, anxiety disorders are associated with other ailments such as chronic pain and they tend to limit the sufferer’s participation in daily activities. The disorders are more prevalent in women, and only a third of sufferers receive treatment specifically addressed at anxiety.

4. Small arms ownership.The Graduate Institute of International Studies in Geneva ranks the U.S. number one in both the total number of civilian firearms and in per capita ownership of small firearms, beating out recent war zones like Yemen, Serbia and Iraq.

In fact, we may even have more guns in the U.S. than we have people: The rate of private gun ownership in the U.S. was tabulated at 101.05 firearms per 100 individuals in one study. According to a recent report on CNN, Americans own as many as one-third of the guns in the entire world. Research also shows that while the number of households with guns has declined, current gun owners are stockpiling more guns. Part of this concentration seems to stem from the fact that guns are primarily marketed to people who already own guns.

A related statistic: In the U.S., the gun-related murder rate is the second highest in the developed world. Only Mexico, where the ongoing drug war expands the number, has us beat.

The latest stats show that the total prison population of the U.S., including pre-trial detainees and remand prisoners, is 2,239,751. These people are behind bars at 4,575 different facilities. The estimated capacity of our prisons, by the way, is only 2,134,000. In 2010, there were an estimated 70,792 juveniles locked away.

Racism is rife in the prison system, with blacks and Hispanics disproportionately represented. Inhumane conditions abound, from poor care for those suffering from serious diseases like HIV/AIDS to the torture of solitary confinement to rape to abuse of the mentally ill.  Debtor’s prisons are thought to be a relic of the 19th century, but starting in 2011, in the U.S. you can find yourself imprisoned for debt in several states, including Florida. High rates of imprisonment seem to derive from a number of factors, including long sentences, the incarceration of non-violent offenders (20 percent of the prison population is made up of drug offenders) and the privatization trend, in which private corporations rely on “growth” models to increase their profits.

Factors contributing to high use include the cost of heating and cooling increasingly large homes, electricity requirements for home electronics, the high amount of energy required to produce consumer goods in the industrial sector, and transportation usage.

U.S. energy consumption almost tripled from 1950 to 2007, driven by population growth and increased standards of living, and then dipped in 2009 due to the Great Recession. The U.S. is predicted to experience a slight decline in energy use in the coming years, but world energy demand is on pace to double by 2050.

7. Health expenditures. The U.S. devotes more of its economy to health than any other country, 17.6 percent of GDP in 2010, and the trend is slanted upward. We spend more in every category of healthcare, especially in administration costs, due to the existence of thousands of different insurance companies.

Yet the Commonwealth Fund ranked the U.S. dead last in healthcare quality among similar countries, while noting that U.S. care is the most expensive. A coronary bypass in the U.S., for example, costs 50 percent more than it would cost you in Canada, Australia and France, and twice as much as you’d pay in Germany.

Despite all the money sloshing around, the U.S. has fewer physicians per person than most other OECD countries, fewer hospital beds, and a lower life expectancy at birth, according to a recent PBS report. The same report stated that the U.S. spent $8,233 on health per person in 2010. The next highest spenders, Norway, the Netherlands and Switzerland spent at least $3,000 less per person.

8. Cocaine use.When it comes to cocaine use, we’ve got a tie with Spain. In both countries, according to the 2008 World Drug Report released by the UN Office on Drugs and Crime, three percent of adults and teens say they’ve given it a try.

Between 2006 and 2010, cocaine use is reported to have declined significantly in the U.S., but demand has by no means disappeared: about 2 million Americans are regular users (crack users account for about 700,000 of these). Colombia was once the major supplier of cocaine to Americans, but it has now fallen behind Bolivia and Peru, according to the Office of National Drug Control Policy. Cocaine is the second most popular drug behind pot, but unlike marijuana, it is associated with high rates of death, particularly due to cardiac arrest.

Interesting factoid: Cocaine has a nasty link to industrial capitalism. It first became popular with laborers as a way of increasing productivity, and employers often supplied the drug.