Now he wants billionaires to power a third party for the 2016 presidential campaign. That’s not progressive 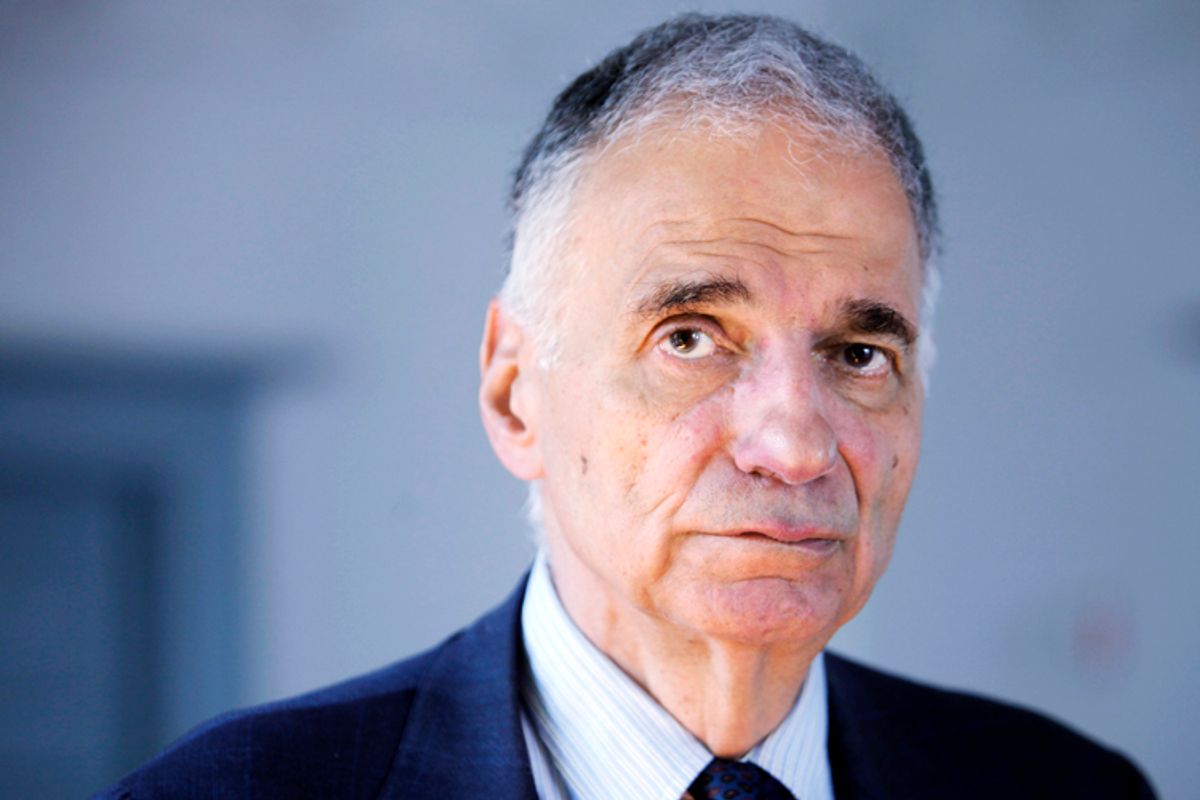 I mostly try to ignore Ralph Nader, the once-heroic consumer crusader who brought us seatbelts and, in 2000, President George W. Bush. Instead of being apologetic for his role in siphoning progressive votes from Al Gore, he’s been defiant, becoming increasingly unhinged on the question of the perfidy of the Democratic Party. Nader is now a sort of Sarah Palin figure, colorful and ornery and to fans a bold truth-teller, but ultimately impotent, and I try not to write about either of them. I try, and sometimes fail.

Nader’s current crusade -- for a third party powered by billionaires that would put up a presidential candidate for 2016, to save the country from both Democrats and Republicans -- is so ludicrous, and so illuminating of his cracked theory of political change, that it bears a little discussion. In March he told C-SPAN’s Washington Journal that he was looking to recruit billionaires to run as third-party candidates for president.  “There are some mega-billionaires who are seriously considering running third party. And the minute a mega-billionaire announces, like Ross Perot, they get enormous press, they get the polls and they are in play.” He continued:

“Mayor Bloomberg almost did it in 2012, and I think it is almost highly probable that, because there are so many mega billionaires now, a lot of whom are in their forties and fifties, they’ll say, ‘Look, we’ve had enough, we are going to go for a three- or four-party race,’” Nader said. “And all they gotta do is write a check for themselves. So when someone like Mr. Bloomberg’s worth $27 billion, to write a $500 million check and not have to dial for dollars….tends to be attractive to a lot of voters.”

On Monday he took his crusade to MSNBC’s “Daily Rundown,” telling Chuck Todd, “I’m gonna find at least 10 enlightened billionaires, or multibillionaires,” who have spoken out with “civil enlightenment” and “courage.” Once he vets these enlightened plutocrats, “I’m gonna encourage them to run.” When Todd asked whether that represented an “if you can’t beat ‘em, join ‘em” approach to the problem of money in politics, Nader replied that he was “fighting fire with fire.”

Now, for a moment in the interview, he reminded me of the old Ralph Nader, because his diagnosis of how our politics isn’t rising to meet the crisis of income inequality, in particular, is correct. The problem is his prescription. Nader has never wanted to do the hard work of either building a party, or changing the Democratic Party (that would be my choice) city by city or state by state. He prefers top-down solutions and the glamour of a national presidential campaign to the gritty work of building a citizens’ challenge to corporate control.

But this is a new low, even for Nader. Anyone who purports to care about income inequality who encouraged New York Mayor Mike Bloomberg’s flirtation with a 2012 third party presidential run – as Nader did in 2011 – is a hypocrite. Trusting enlightened multi-billionaires to lead us out of political paralysis and toward economic equality is anti-progressive.

Todd also asked Nader how he could say there’s no difference between the two parties given what the Tea Party has done to the GOP, and Nader allowed that “the right wing of the Republican Party has gotten so crazy” there now seems to be some distinctions. But then he asked “What’s the difference between Generalissima Hillary or McCain?” and insisted “the White House and the Congress are not that different.”

Slurring Clinton as a fascist is abhorrent, and saying Obama and Congress are “not that different” is delusional. Yes, on NSA spying, there’s too much consensus, but Nader didn’t talk about that. On economic issues, we need more bold populism from the president and his party, but denying there’s a difference from Republicans means you’re not paying attention, or you don’t really care.

I’m struck by the contrast between Nader and another insurgent presidential candidate, former Gov. Howard Dean. When Dean lost, he didn’t mope or trash or exit the Democratic Party; he took his party-building strategies first to the Democratic National Committee and now to Democracy for America. I’m not saying DFA has a perfect model, but it at least works on issues and local races, rather than just pontificating every four years about who should be president. We need more organizations that channel progressives into issues activism or local politics.

One thing we don’t need: an elitist posing as a populist finding even new ways for billionaires to control our politics.