First they balked at aid for 9/11 responders. Now lawmakers are gutting fire departments with sequester cuts 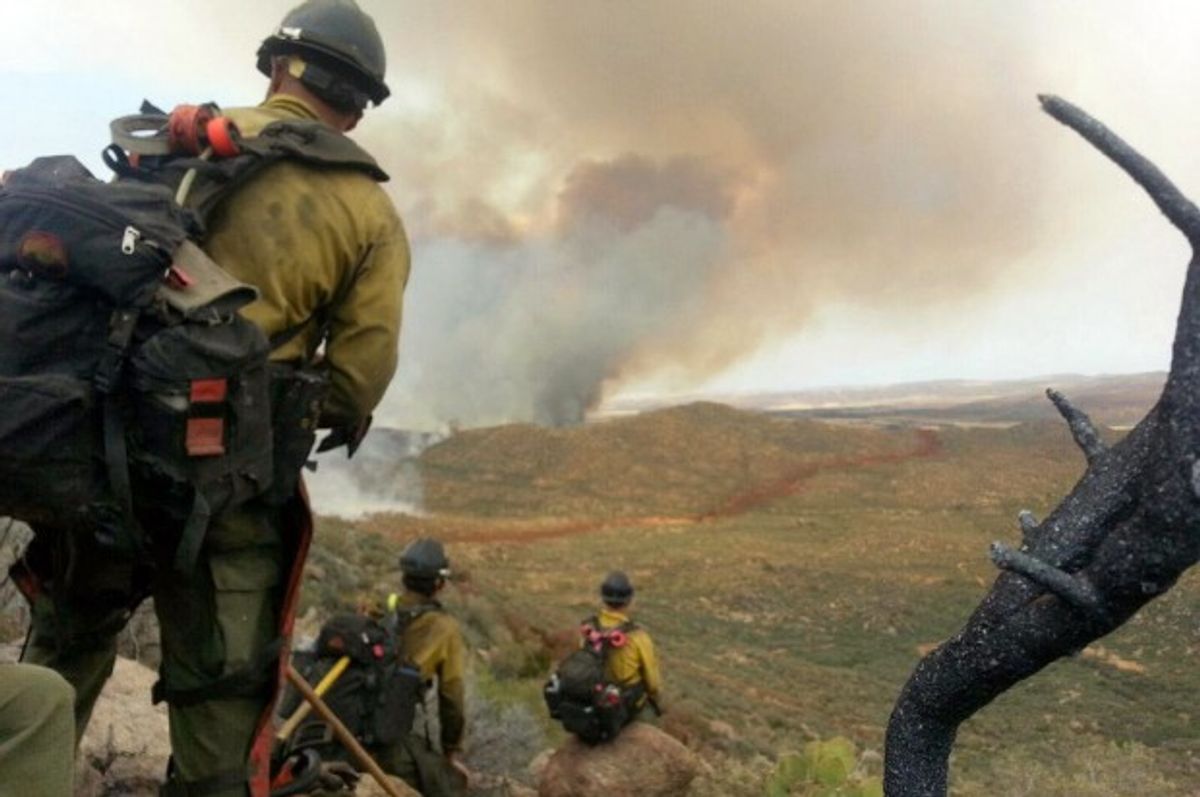 In the weeks and months immediately following 9/11, one of the most touching responses in my neighborhood, not far Ground Zero, was the overwhelming support of police and fire departments from around the country. Across the street from my apartment, at the 6th Precinct headquarters from which two officers had rushed to the scene and died, every day a different police contingent from a different town in America guarded our street. And a couple of blocks away, at the Squad 18 firehouse, which lost seven men on September 11, fellow firefighters from all over came to stand vigil and pay their respects. Solidarity.

All this came back to me when the memorial was held a couple of weeks ago for the 19 firemen who died battling the Yarnell Hill wildfire in Arizona. The tragedy was the worst to befall firefighters since the World Trade Center came down, and the most deadly in eighty years for the men and women who dedicate themselves to taming blazes in the wilderness.

Thousands jammed into an arena in Prescott Valley, Ariz., with the overflow of the crowd in an adjoining parking lot, standing, listening and mourning under the desert sun. There were firefighters there from Phoenix, Tucson and Yuma, but also from Sacramento, Los Angeles – and New York.

Nine days before, the crew members of the Granite Mountain Hotshots had been fatally overtaken by flames and smoke. When the winds picked up and the fire changed direction, surging four miles in twenty minutes, they were trapped, surrounded in a box canyon, trying to save themselves under emergency fire shelters that melted from the heat.

Anyone who has ever been in the middle of a serious fire knows how terrifying they are and unpredictable, even for those like the hotshots, with their courage, skills and conditioning. Much of what gets them through is their camaraderie and the knowledge that what they do saves lives and property. The least we can do is stand in solidarity behind them, but on both a micro and macro level, our stalwart U.S. Congress, aided and abetted by government bureaucracy, is cutting Western firefighters’ lifeline much as it did when members of the House initially balked at aid for sick and dying 9/11 first responders. This, despite their publicly professed pride in the men and women who rush into danger when the rest of us rush out to safety.

“In May, Obama administration officials warned that sequester cuts would inhibit the nation’s ability to effectively fight wildfires in the West,” Derek Pugh wrote in the progressive Campaign for America’s Future blog on July 1. “… Budget cuts are putting the lives of our firefighters and those who live in and near forests at an unacceptably high risk.

“… The automatic spending cuts have forced the U.S. Forest Service to shed 500 firefighters, between 50 and 70 fire trucks and two aircrafts in this year’s budget. The sequester will leave agencies $115 million short of normal firefighting capacity, meaning that 200,000 fewer acres will be treated to prevent fires.”

Fighting actual fires has meant shifting money from fire prevention, which in a Catch-22-like situation may actually create more and worse fires in the future. And, according to the Climate Desk at Mother Jones magazine, “…The agency’s next proposed budget cuts preventative spending by a further 24 percent.

“It’s all part of what fire ecologists, environmentalists, and firefighters interviewed by Climate Desk describe as an increasingly distorted federal budget that has apparently forgotten the old adage about an ounce of prevention: It pours billions ($2 billion in 2012) into fighting fires but skimps on cheap, proven methods for stopping megafires before they start.”

This worry was echoed by four Western senators in a letter to the Office of Management and Budget and other cabinet departments – written, coincidentally, on the very day the fatal Yarnell Hill fire began: “This approach to paying for firefighting is nonsensical and further increases wildland fire costs.” And a May report from Northern Arizona University’s Ecological Restoration Institute “found that the bulk of the costs from megafires are borne not by the federal government but by local governments – and the federal budgeting process ignores those bills when weighing whether prevention saves money.”

As for the macro, the simple fact that we refuse to take legislative action to curb climate change is part of the reason fires will continue to worsen. “Big wildfires… thrive in dry air, low humidity and high winds,” James West reports in Mother Jones. “Climate change is going to make those conditions more frequent over the next century. We know because it’s already happening: A University of Arizona report from 2006 found that large forest fires have occurred more often in the western United States since the mid-1980s as spring temperatures increased, snow melted earlier, and summers got hotter, leaving more and drier fuels for fires to devour.”

“Thomas Tidwell, the head of the United States Forest Service, told a Senate committee on energy and natural resources recently that the fire season now lasts two months longer and destroys twice as much land as it did four decades ago. Fires now, he said, burn the same amount of land faster.”

It’s part of that “new normal” you keep hearing about – drought, heat, earlier growing seasons, new insect infestations, global air and water currents, like the Gulf jet stream, shifting. And fewer trees mean less carbon dioxide being absorbed by them, more CO2 given off when the remaining ones burn, which adds to the warming and more fires… you get the picture.

“The West is burning,” Senate Majority Leader Harry Reid recently told reporters. “We have climate change. You can’t deny it.” And if you don’t believe him, listen to Dr. Michael Medler, a scientist at Western Washington University who used to be a wildland firefighter himself. “On the firelines, it is clear that global warming is changing fire behavior, creating longer fire seasons, and causing more frequent, large-scale, high severity wildfires,” he told a House Select Committee on Energy Independence and Global Warming. “Many firefighters have commented that they are facing more extreme fire behavior than they have witnessed in their lifetimes.”

The good news is that Dr. Medler says some of his colleagues speculate there’s a ten-year “window of opportunity to… have some control over fire behavior with desirable effects…”

The bad news is he said that nearly six years ago. The Granite Mountain Hotshots have just finished burying their dead.