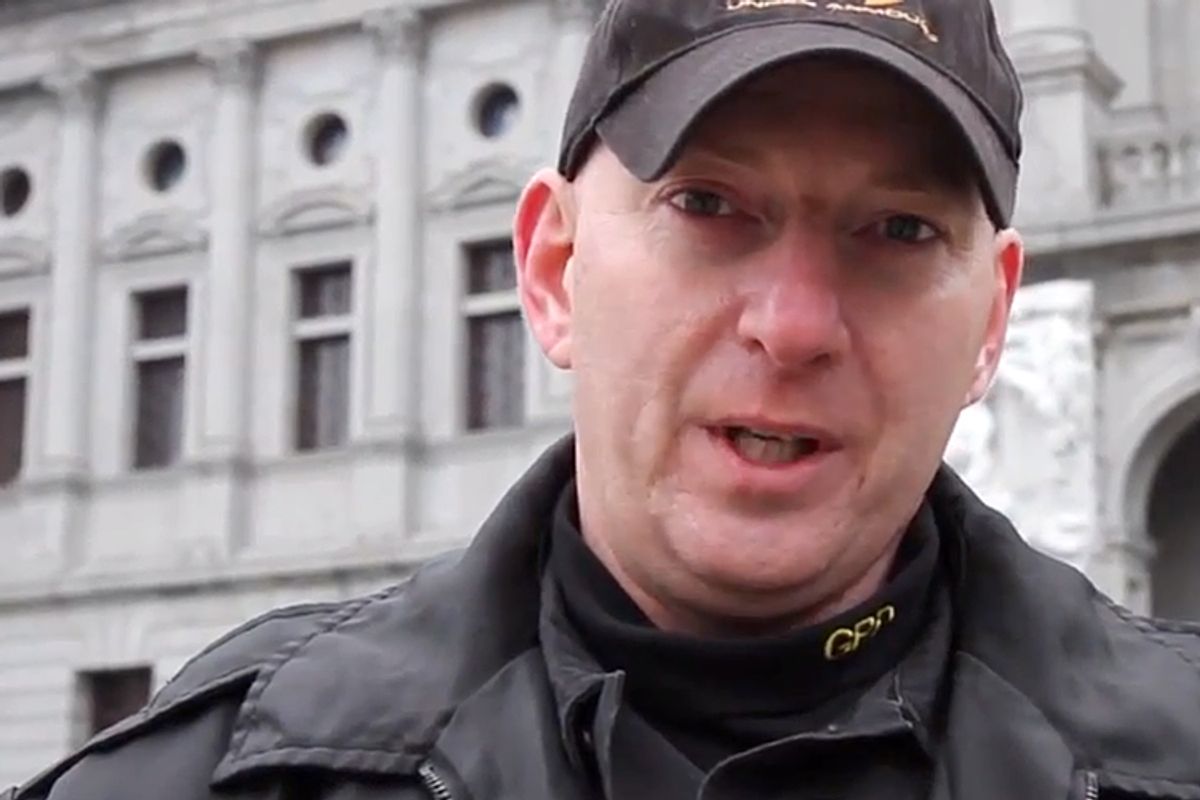 Hemorrhaging allies and local goodwill, Gilberton, Pennsylvania police chief Mark Kessler says he expects to lose his job over a profanity-laced YouTube video in which he discusses shooting "libtards." "I’ll probably be out of a job by the time I get home," Kessler told NBC News while on vacation in Texas. Since we first wrote about Kessler last week, dubbing him "America’s scariest police chief," the lawman has received national attention for his antics, which include forming a right-wing paramilitary organization called the Constitution Security Force.

Meanwhile, a group of pro-gun law enforcement and military officials with whom Kessler has aligned himself say they want nothing to do with the chief. "Chief Kessler is not working with Oath Keepers, nor is Oath Keepers working with him," Elias Alias, who sits on the Oath Keeper's board of directors, said in an email to Salon.

Kessler sometimes sports a black Oath Keepers t-shirt and has earned praise from the group's leaders in the past. His militia-style organization and the Oath Keepers share a similar ideological agenda and have at least some overlapping membership, but Alias made clear that Kessler is not a member of his group.

The police chief has largely eschewed media interviews since the controversy broke (he did not respond to a request from Salon), but addressed the controversy on his radio show today. "What a week," he sighed, bewildered at the attention he's received and the degree to which he's "pissed off a lot of libtards." "It's about to get very ugly, I can tell you that," he said, explaining that he has received death threats and calls for his children to be taken away from him.

He was completely and totally unrepentant, and called out his critics by name: The local school board president is a "fucking fat fuck," detractor radio hosts are "faggots," and the sheriff is an "illustrious piece of shit." Noting that his father fought in Vietnam, Kessler added: "He killed better people than these fucking scumbags that are attacking me today."

Gilberton Mayor Mary Lou Hannon told the AP that "the profanity and violence in [the video] was a little upsetting," but said that Kessler has been a "loyal" public servant. The chief is also a member of the North Schuylkill school board, which released a statement Friday saying that it doesn't "condone or agree" with Kessler, but has little power to remove any of its members.

Still, when Patriot-News opinion editor John Micek visited the tiny coal town of Gilberton this week, he found a number of residents willing to defend Kessler. “He’s a good guy. He’s good to the town,” one man remarked. And Kessler had enough clout to get the borough council to unanimously pass a resolution he authored in January that authorized him to take "any and all measures" to prevent the enforcement of gun control laws.

Since our first story on Kessler last week, we've been deluged by people sending us other comments that they find offensive. For instance, there's this instructional video Kessler posted on YouTube, where he teaches viewers basic pistol technique using "Nancy Pelosi" as a target. The image is of a deranged clown with a hammer. "This is what most of our congressmen and women and senators look like without their plastic surgery and makeup," he quips, before riddling "Pelosi" with bullets. "We're going to give two to Nancy [bang, bang]. Then we're going to put two in her face [bang, bang]," he explains, repeating the exercise several times with glee.

There's also his apparent belief in the conspiracy theory that President Obama was not born in the United States. He interviewed Orly Taitz in June, calling her "the real deal," as opposed to fellow birther activist Mike Zullo (they're on opposite sides of the birther civil war). Kessler endorsed much of what Taitz had to say, questioning the president's eligibility to serve and calling him a great liar. Previously, Kessler endorsed the notion that most of Obama's past is fictitious, including his enrollment at Columbia University.

In other interviews, Kessler ruminates openly about insurrection against the federal government. "We have to be able to match -- all law-abiding citizens and freedom lovers across this great nation -- need to have the same implements that the oppressors have. How do you fight somebody that has firepower like an AR-15 or M-16, which our government carries, with rocks? It's just not going to happen," he said once.

He had planned a march on Washington in September, but it's unclear if the rally will go on, given the controversy.