Mystery of my dead brother's son

I couldn't save Nathan from drugs. When a troubled woman with a baby reached out, I wondered: Could I save them? 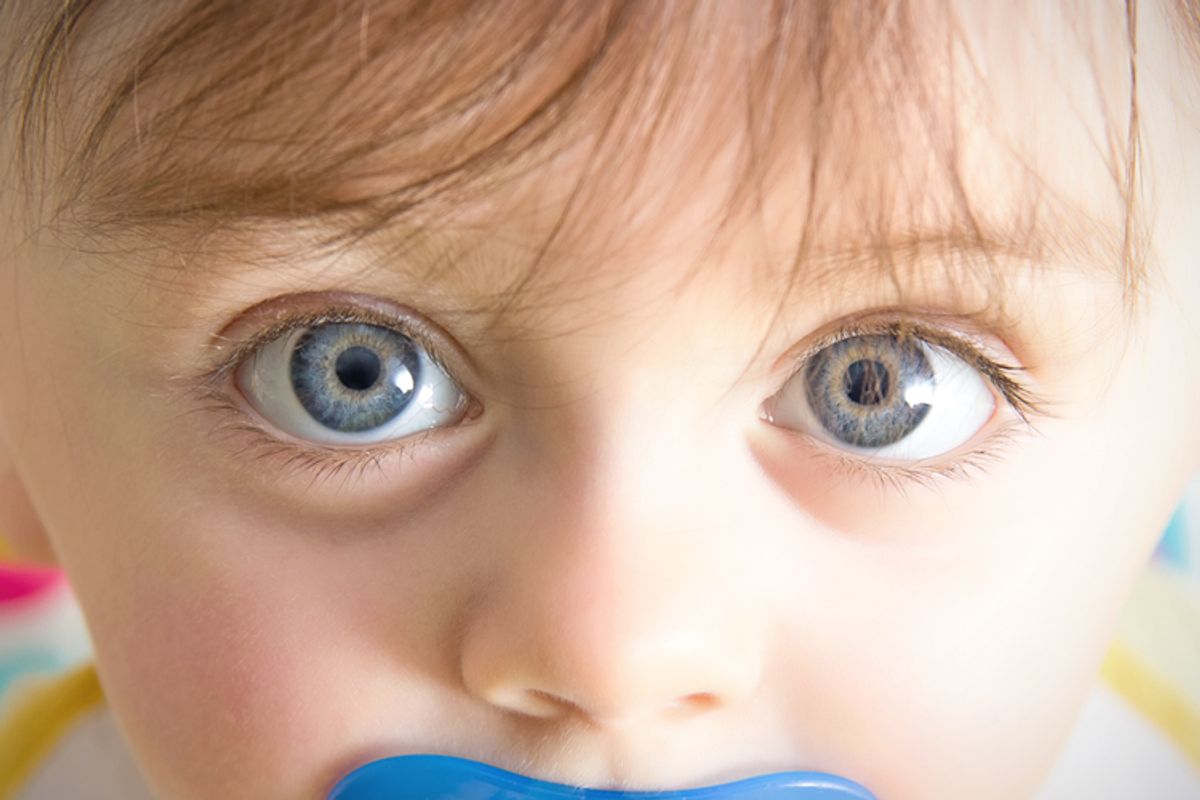 The first message came via MySpace: “Are you the sister of Nathan? CALL ME.”

Every instinct told me not to call, but I called, of course, despite fears it might be related to a drug deal gone wrong. Vengeful dealers didn't use MySpace, did they? Her name wasn’t Sunshine, but that’s what I’ll call her; she’d been my brother’s girlfriend. Maybe I should have suspected, but her announcement, when it came, was almost too ordinary. Her voice was raspy and pleased.

“I had a baby in May, a little boy.” She spoke slowly, as if to a dimwitted child. “And I think he’s your brother’s.”

I was dazzled, and just as abruptly, I felt sick. The Houston sun burrowed through the window as I clutched the phone and stared at Sunshine’s MySpace profile. Her picture offered a defiant stare, heavily lined eyes and too much foundation. It was a self-portrait taken at arm’s length, her finger a blurry white blob in the corner. Her spelling was alarmingly bad. “Life happends,” the page proclaimed. She reminded me of the girls in my high school I’d avoided, fearing I was one honors class away from their fate.

“There were a couple other guys,” Sunshine conceded. “I could have been with lots of guys out there. Everyone wanted to know why I picked your brother. But with that goatee and everything -- what I’m saying is, he looked good. We were together for two weeks in August,” she added. “The timing lines up. The doctor said.”

August. My brother had died late that month; the police found him face down in a creek. For years he’d been adrift, high or sober, on buses or briefly home, in jail, rehab, the hospital or an alley. I’d pictured him everywhere and nowhere at once.

“Your brother was so sweet to me,” she said. “I’m saving his guitar and his hat for when my boy is bigger.”

The guitar made it feel true. I had no idea if I wanted it to be true. My mother, siblings and I hadn’t been able to talk much about Nathan since the funeral, and I worried my mother would lose herself trying to rescue this girl as she had with my brother. See the baby, I thought hazily. That was first.

“I don’t want money or anything. Rooster!” she called, “Shut up!”

“Your brother’s best friend,” she said.

“Could you send a picture?” I asked.

“I’ll send you a disposable one,” I said. In the background, a baby wailed.

Sunshine assured me she’d gone to the child support services in her city and given them my information. To receive benefits, she was obligated to establish paternity; they would test my DNA via legal channels. But as the summer dragged on, the test didn’t materialize. I hadn’t told my relatives and my silence felt alien. I researched private tests to discover they started at three hundred dollars. Steep, on my adjunct’s salary.

Sunshine sent me a link to an online photo album. The first image showed her pregnant and prettier without makeup, hair hanging to her waist. Another, startling shot was of her baby being lifted from her uterus, dripping, his mouth open in a wail. Yet another offered a blurred view of a well-wrapped baby, his grandmother wearing a pink velour tracksuit, his mother with an IV in her arm. The boy looked as scrawny and scrunched as any newborn, anywhere. I zoomed in and tried to call up the finer details of my brother’s face. His small, delicate nose seemed most like Nathan’s. I clicked again, but couldn’t get any closer than I already had.

Then Sunshine called because social services had taken the boy away.

I was driving in rush hour traffic. I tried to slow her down. Sunshine’s middle son had broken his toe while visiting her; she was accused of negligence. The caseworker had come to the hospital to administer a drug test.

Sunshine was outraged. “I said, I’ll drop my panties right here! I’ll take a piss test! I just smoke a little weed. But could I give them your name, in case?”

“For social services,” she said patiently. “As next of kin.”

Even as I switched lanes, exited, parked and locked up the car, even as I greeted my students and uncapped my dry erase markers, I thought of the baby, my possible nephew. I was teaching composition two days a week at a campus that shared a parking lot with a Chili’s. Many of my students reminded me of Sunshine: white, working-class, trying to reassemble their lives. One young woman who smoked frantically during breaks, her bleached hair pulled into a ponytail, told me that day she was dropping the class. "I don't have the money," she said flatly. I told her to stay in touch. I watched her go, knowing I'd never hear from her again, and decided to give Sunshine all of my contact information.

I considered flying out to visit her. My partner, Morgan, eight months pregnant, begged me not to. “What are you going to do?” she asked. “You can’t just take the baby. Besides, she has a case manager.”

She did, along with a small apartment she’d secured with welfare. Her life was tangled but she was surviving, and true to her word, she never asked for money. What she wanted was my attention.

It was hard to cut off Sunshine’s soft, desperate confessions. I sat in the House of Tea parking lot one afternoon, rain hammering my car, while she told me about landing on the streets. Sunshine had met her ex-husband – a wiry, tattooed specimen with a cunning face – as a teenager. He cheated, he apologized. They had two sons.

For my brother, homelessness was first a temporary condition, endured between bouts of angry leaving and sheepish homecoming. When he was high with money for drugs, Nathan enjoyed being off the grid; otherwise, it weighed on him. We’d tried everything, but he couldn’t break free. Sunshine was blunt. It reassured me, somehow.

“When you’re on the streets, you’re just, you know. Your self-esteem is real low.”

Our son was born on August 24, his expression bright and quizzical. I held him tightly, afraid someone might snatch him away. He and I share no DNA; I had to legally adopt him to prove to the world that we belong together.

I began ignoring Sunshine’s calls, but I did send a care package. She’d assured me she had plenty of baby clothes from the Catholic mission, so I sent her a few board books, two disposable cameras, and hesitated before I slipped in 40 dollars. After I sent the package, I hated those 40 dollars. They seemed patronizing, paltry. Then I wondered if she’d spend it on drugs. I had suspected this of my brother, and so I’d never sent him anything.

In my eulogy for Nathan, I stared down my cousins lined up in the bland blond pews of St. Cecilia’s and urged them not to feel guilty. We couldn’t save him, I said. It was bullshit, of course. I hadn’t answered the phone the last time Nathan called. “Hey. It’s your brother. Been a while since we talked, so, you know.”

There is his voice, looping forever in my mind at 26 years old.

Sunshine dutifully took pictures and sent them. The boy, no longer a newborn, was a pale, drooling child with big ears, a wide smile and reddish hair. Nothing about his appearance confirmed or denied Nathan’s parentage. Pictures, I saw, would never be proof.

I called the Child Support Office in her city. They had no record of any paperwork filed under Sunshine’s or my brother’s names. I repeated the information twice to the hapless secretary.

“Well, if he’s dead,” the woman said, “she couldn’t go through us. That’s Social Security. I mean, we’re the child support office.”

My son woke up, howling. I thawed frozen breast milk, fed him, and tucked him into a sling for our daily walk. I thought of Sunshine’s hoarse entreaties, her tears and her fascination with the romance of a dead boyfriend. I wasn't obligated to her. But the baby was real.

I had to order the test.

The process was simple. I paid for overnight return shipping in advance and had two kits sent, one to my apartment and one to Sunshine’s. She was to swab herself and the boy, deposit the swabs into their envelopes, and send these to the lab. I’d do the same.

The kit came in a small, unmarked manila envelope; I spread its contents across our coffee table. We’d opened the windows for a breeze and I was afraid the kit would scatter onto the floor. It contained two long cotton swabs with firmer bodies than a Q-Tip and an illustrated pamphlet demonstrating how to stroke one inside your cheek. The level of detail seemed faintly absurd.

I’d worried that Sunshine wouldn’t follow through, but she was remarkably eager to do her part. Indeed, she called almost daily after she’d mailed her kit.

The results came in a PDF file that appeared in my inbox nonchalantly. The attached document, for all its portent, was a puzzle, a multicolored chart full of numbers. I pored over it, looking for a line that declared YES or NO. Instead, three columns gave chromosomal information for “Mother (Other),” “Child (Focus),” and “Aunt (Alleged).”

At last, I located the text box that announced: “Other than the statistical results displayed in the next section, the degree of the alleged relationship based upon set thresholds of certainty is neither stated nor implied.” Below this was a combined index number that presented the possibility of a genetic link. Anything below one is highly unlikely to indicate familial connection; the number on my document was a mere 0.15. At the bottom of the page, the report concluded: Thank you for using our services!

The boy was not my nephew. I held my son against me and thought of Sunshine’s baby sleeping in the city where my brother had died. I longed for Nathan, all at once: the burden, the cipher, the child. I wondered about the alleles we shared, the invisible strands that had linked us but could explain neither his death nor my life.

My brother’s autopsy report was concluded on my 28th birthday. The night he died, he wore a black T-shirt and a cloth belt to hold up his pants. His blood swam with toxins. Bruises riddled his skin. Yet his organs were in the “usual and expected locations,” his heart was perfect, red and smooth, and his weight was identical to mine.

I didn’t call Sunshine with the results. I didn’t want to let her down and couldn’t find the right words. Days passed, then weeks. I dialed and hung up, over and over.

At last I found Sunshine on Facebook, to which she’d migrated from MySpace. I read her status updates and scrolled through her photos. She looked older, weary lines forming around her eyes. She was fond of FarmVille and animated Bible quotes. I learned nothing new about her sobriety, her custody battles or her plans.

I sent her the message.

Irene Keliher lives in Seattle, WA, where she is a Made at Hugo House Fellow and a librettist for the Seattle Opera. A recipient of the Tobias Wolff Award for Fiction, the Potomac Review Fiction Award and the Pearl Editors' Prize, she's at work on a memoir and a novel about the future of books.