“I think she could have died"

Think Chile is an emerging nation? Its policies and stories on women's health issues will frighten you 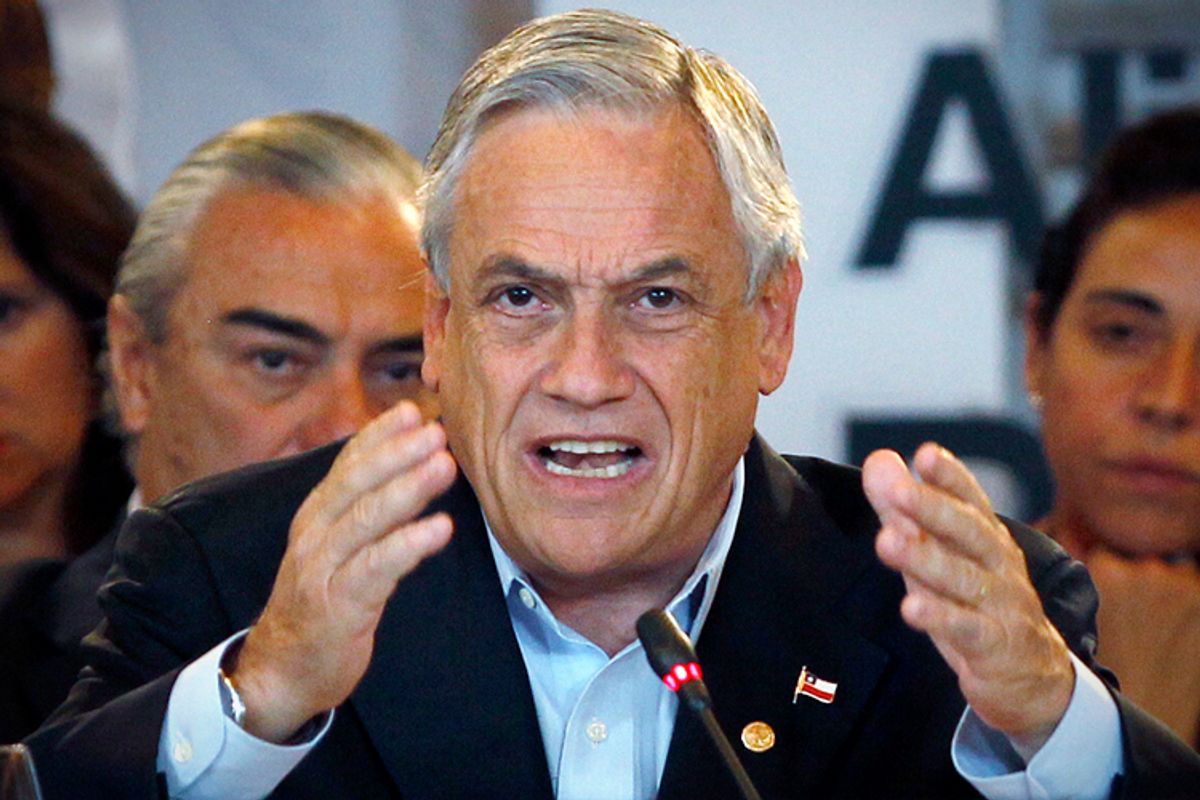 In Chile, an 11-year-old girl named “Belen” is more than three months pregnant after being repeatedly raped by her mother’s partner. But she cannot get a legal abortion.

In a televised interview, Belen explains that she fully intends to deliver the child. “It will be like having a doll in my arms,” she says. Later, President Sebastian Piñera, who opposes legalizing abortion in all cases, remarks that Belen “surprised us all with words showing depth and maturity when she said that, despite the pain caused by the man who raped her, she wanted to have and take care of her baby.”

Belen’s story has reignited the debate about abortion in Chile, one of the most prosperous countries in Latin America with some of the most restrictive abortion laws in the world. And advocates and health professionals argue that the law should be changed to legalize abortion in the case of rape and when a women’s health is at risk—both exemplified in Belen’s situation.

Her case brings an issue to life that has long been ignored in Chilean politics, and has forced activist circles to take matters into their own hands. One such organization is a controversial phone hotline that gives female callers medical information about the misoprostol pill, an ulcer medication that induces miscarriages and is clandestinely sold on the Chilean black market.

The hotline’s work is polarizing and dangerous. They operate in a tenuous, legally gray area: technically, their work is lawful, but only if they adhere to a strict set of rules. Volunteers are able to provide the information they do because similar guidelines are available online from a variety of organizations, including the World Health Organization (WHO).

Since Chilean law has put women behind bars for getting illegal abortions (one woman saw her roommate hospitalized and jailed after aborting with a TV antenna), volunteers can't address callers in the first person or answer specific personal questions without running the risk of arrest. In essence, they could be detained for simply saying the wrong thing, construed as helping women obtain an illegal procedure. Instead, they can only read publically available text that provides generic information about misoprostol.

If women call with health complications after taking the pill, volunteers are not legally allowed to call them back or follow up.

“There have been many times when people have called the hotline really upset, and in those cases you want to address them directly,” said a hotline volunteer named Emily. “You don't want to talk to them in the third person because it sounds cold… I try to express sympathy through my tone of voice.”

It hasn’t always been this way in Chile. Between 1931 and 1989, therapeutic abortion, or terminating a pregnancy to save a women’s life, was legal. But that changed in 1989, when General Augusto Pinochet criminalized all abortion shortly before the end of his 17-year dictatorship. Now, it’s one of just six countries worldwide where abortion is illegal under any and all circumstances. The others are Nicaragua, El Salvador, Malta, the Dominican Republic and the Vatican.

Chilean government doesn’t compile statistics on abortion, but a 1994 study by the Guttmacher Institute, a nonprofit organization focused on reproductive health, estimated that the country’s annual number of clandestine abortions hovered around 160,000. Other approximations range from 60,000 to 200,000 per year.

A volunteer named Cata says that the hotline receives many calls from immigrant women who are often afraid to seek out help or go to a medical clinic after health complications resulting from taking misoprostol.

“Not too long ago, a woman called me,” she said. “I think she was Peruvian or Ecuadorian. She had been hemorrhaging, and was doing very badly. And then, I heard in the background that she was with a child around three years old. And I thought, ‘you’re alone, with another baby, hemorrhaging, in pain, bleeding.’ And I don’t think she went to the clinic. I think she could have died.”

The debate that surfaced in the wake of Belen is similar to the conversation that surrounded “Beatriz” in El Salvador, a young woman with health complications who was initially denied an abortion. Activists sent out petitions, emails and videos calling for abortion to be decriminalized for rape and when delivery threatens a woman’s life. Michele Bachelet, Chile’s first female president, running again in the country’s upcoming November presidential elections, told a local radio station, “She's a girl who needs to be protected and therefore I think a therapeutic abortion, in this case because of rape, would be in order.”

Publicity about such egregious stories, where Chilean policy is so different from the norm even in the most conservative countries, might seem a threat to Chile’s image as an emerging economically developed country. But an official response is hard to find.

SERNAM (Servicio Nacional de la Mujer), or the National Women’s Service, is an official government organization that was created in 1991 “to promote equal opportunities for men and women. “This includes CEAAM, a telephone hotline that provides resources to pregnant women in “vulnerable” situations, like those who may have unwanted or unplanned pregnancies.

I asked a spokesperson from SERNAM about the organization’s position on cases like Belen’s. “We are committed to the culture of life that requires supporting pregnant women in vulnerable situations so that they opt for life, and the life of the unborn child,” she replied via email. “In Chile, legal abortion does not exist and as a government we do not support any initiative” of that respect.

I also called the phone number the website provided for CEAAM during operating hours five different times over the course of a week. This is purported to be a hotline for pregnant women, but not once was the line answered.

In recent years, neighboring countries Argentina and Uruguay have eased abortion restrictions. But Chile is different, hotline workers say. “It will be generations before it’s legal here,” another volunteer named Carolina said. “It’s not a matter of left or right… The political system has to be completely renovated for the abortion situation to change.”

These uncertainties have colored volunteers’ perspective on working with government to enact change.

“Our struggle isn’t to decriminalize abortion, or to go to Congress to discuss with them, so they can decide,” Carolina said firmly. “It’s for a more autonomous movement.”

Andrea Schilling has a different perspective. A Santiago-based gynecologist, her goals are focused on policy change, and her viewpoints mirror those of MILES Chile, the country’s largest lobbying organization to legalize therapeutic abortion. She believes the information the hotline provides, while valuable, doesn’t replace the act of decriminalizing abortion. That’s because, in her analysis, the women who call the hotline have cell phones and the financial resources to pay for the expensive misoprostol pills. But there are many poor women who don’t.

What happens next in Chile will largely depend on public opinion. Machismo, Catholicism, and conservatism simmer at the core of modern Chilean society. It’s hard to walk down the street without falling prey to the piropos -- or catcalls -- of men, many of whom consider it an affront to their masculinity if a woman shouts right back. Several of the women I interviewed for this piece circled back to that pervasive cultural machismo, sharing stories of repressed sexual education (“My mom didn’t tell me what a period was until I started bleeding,” one woman confessed), power dynamics within relationships in which it was simply impossible to just say “no,” and a general lack of public conversation about women’s sexual and reproductive rights. The criminalization of abortion isn’t to safeguard the human life, some women told me — it’s to control their sexuality.

And while hotline volunteers fight back by providing information, there are still plenty of days when they hang up the phone, feeling drained and uncertain after a particularly heavy conversation.

“There are calls where I feel like for whatever reason I wasn't able to help as much as I may have liked,” Emily said. “Sometimes I'll hang up, and then I'll think about it for the rest of the day. I'll think, well, what happened to that woman? I wonder if she got the pills, I wonder if she was able to do it. You wonder what happens to them afterwards.”