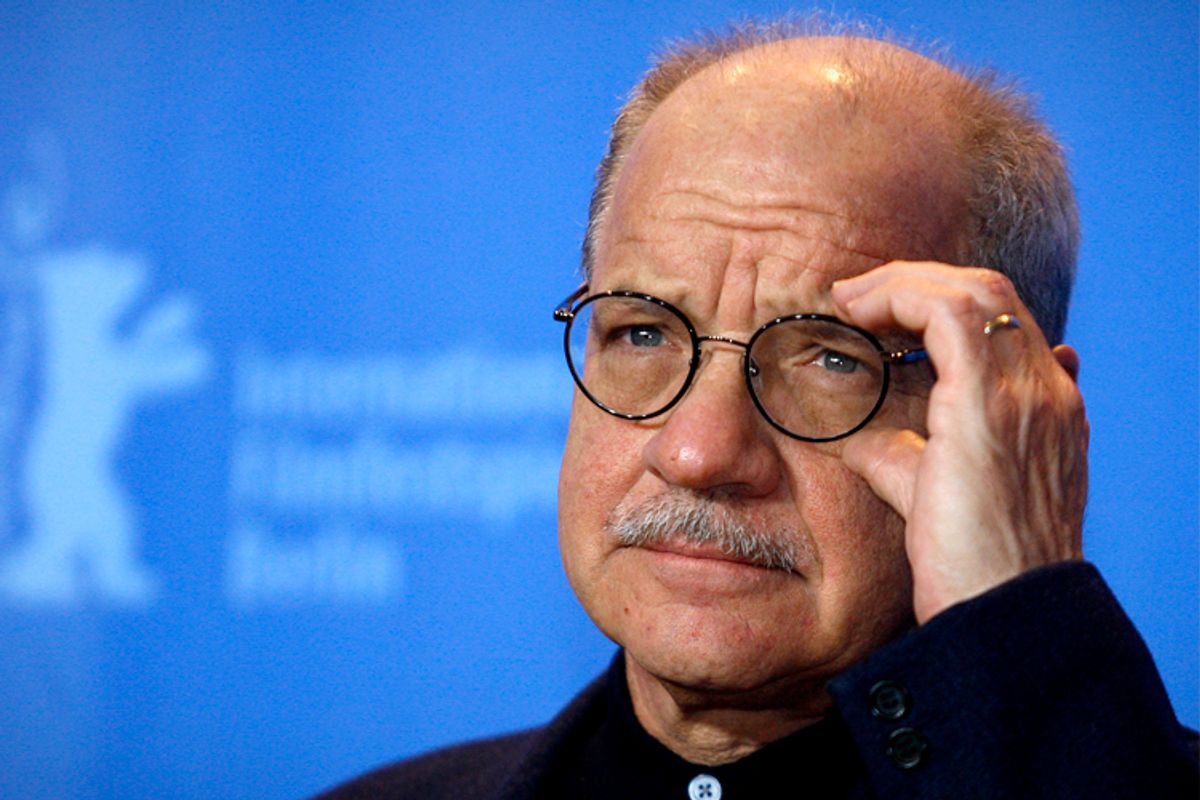 Paul Schrader has had a career of ups and downs -- but with the ultra-low-budget, tabloid-friendly "The Canyons," he's making his most unexpected move yet.

"The Canyons" is the latest from the director of films from Richard Gere's "American Gigolo" to the Elmore Leonard adaptation "Touch" to the seamy Hollywood tale "Auto Focus"; Schrader also wrote or co-wrote the Martin Scorsese classics "Raging Bull," "Taxi Driver," and "The Last Temptation of Christ." The peripatetic Schrader has gone from working with a cinematic icon to a directing the work of a literary bad boy of years gone by -- "The Canyons" represents his first collaboration with newly-minted screenwriter Bret Easton Ellis, the "American Psycho" novelist. But it's Schrader's cast who have thus far gotten much of the press: "The Canyons" stars porn star James Deen (interviewed by Salon Monday) and Lindsay Lohan.

Lohan's participation in the film was at the center of a lengthy New York Times Magazine feature before anyone had seen a frame; the troubled actress is alleged to have driven drunk, disappeared from the set and sparred with her costar and her director over the course of a stressful and extremely low-budget production. Schrader alleges that the author of the piece, Stephen Rodrick, had never spent time on the set before and that the mishaps weren't that serious (Rodrick had a different take).

While Schrader wouldn't go into too much detail about Lohan -- who, in rehab currently, is not actively promoting the film, he had praise for Deen's turn, a major shift away from his adult-film career. Describing Deen's metamorphosis into an actor fit for a theatrical film, Schrader told Salon he could claim no responsibility: "It's not something like an operation where you can turn a homosexual into a heterosexual. The guy has to do it himself."

The initial coverage of the film focused to some degree on personality conflicts -- is that frustrating for a director?

The Times [Magazine] writer is not an entertainment writer. This is the first time he was on a set every single day. Things that are routine business for people on film sets -- he didn't perceive it that way. I remember at one point, I was arguing with Lindsay and she said "I'm glad the New York Times is here to see how they treat me!" That's not an unusual thing to have in the midst of arguing a scene through. But he thought of it as the Oval Office.

[Note: New York Times Magazine reporter Stephen Rodrick told Salon: "Uh, I was on the set of 'Knocked Up' for over 30 days and Michael Winterbottom's 'Tristram Shandy' for over a week. Schrader knows not what he speaketh. It is a common reaction for a subject to say 'Oh, this guy isn't a beat writer, he doesn't understand our world.' Actually, I understand the world very well, but maybe didn't write about it in the deferential manner Schrader encounters with film writers."]

Talk a little about the degree to which the film, or its marketing, parodies the MTV fantasy-reality series "The Hills." Have you seen that show?

But have you, personally, watched it?

That's -- how much of that can you actually watch? It's nothing but cupcakes! Before long you're gonna get sick! But people who like it must feel the opposite.

Is it exhausting to continue to make works that are nihilistic?

I think "Auto Focus" is a hoot! I just sort of love those kind of characters! And the closest I came was the Elmore Leonard thing ["Touch"]. That was a comedy about a [person with stigmata] so I guess it's not really a comedy. If I actually thought these things were dark, I don't think I could make them. And I think everyone feels the same way. You talk to Bret, or Philip Roth, and they're having a good time!

Are you fascinated by themes of California apocalypse? It's such a precarious place.

Talk to me a little about working with Bret.

What has shifted so much?

My generation -- we thought we could make a difference and make the world better. Bret's generation thought they could make money. I don't think that this current generation has any real aspirations. They're making money, but I don't think they're that crazy about money. The characters make movies and they don't like movies that much. They're hooking up and they don't like that much. The difference is, my parents and I always believed life would be better for the next generation. The current generation believes life is going to be worse for the next generation. It's such a change for the future of humanity -- the future is not something, now, that guarantees a better life.

I did the things you do with every actor, you arc out scenes, character, work out comic relief and different ways scenes can be played. That's no different than I'd do with any other actor. When James first came in and did the screen test, I was floored, I just thought this was a cockamamie idea of Bret's and nothing would come of it.

Your career has been kind of varied -- what common themes run through your work?

I think it's true of every artist, and of every single person. We don't change much. Watch something like "56 Up" -- you realize how little people change. Now they're all 56 and they haven't changed at all! I don't think anyone does! You do circle around the same things.

What are those things?

You start with how you were raised. I was raised in a Calvinist community. So you're dealing with that. I was raised with moral responsibility and the idea that life has to have some meaning. When the fact that it doesn't have meaning becomes apparent -- how do you get out of that conversation? When you realize your life has as much meaning as your dog's, that's a conversation that'll never end.