Manning verdict: What you need to know 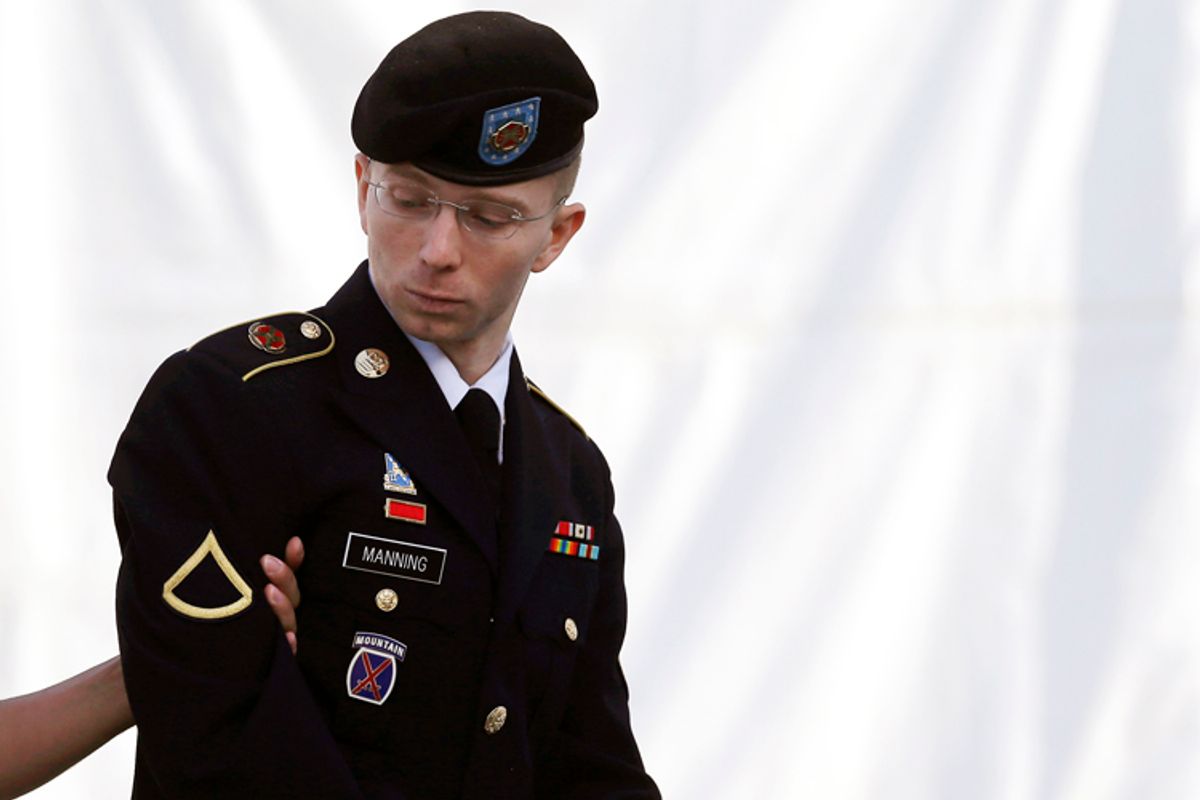 “I believed that if the general public, especially the American public, had access to the information contained within [the military’s own databases], it could spark a domestic debate on the role of the military and our foreign policy in general as it related to Iraq and Afghanistan.” That is — according to a statement Bradley Manning made before to the judge in his court martial, Colonel Denise Lind, on February 28 — what first led Manning to begin to leak large volumes of information to WikiLeaks: a desire to make Americans aware of the potential blowback of our counterinsurgency and counterterrorism policies.

Today, Lind found Manning guilty of 20 charges for that effort to inform the American people of the policies pursued in their name. But, in a hugely significant development, she also ruled that he was not guilty of the charge of aiding the enemy. The verdict was revealed with silence and a delay, as the Army imposed new reporting rules on the press, citing earlier “shenanigans.”

That Lind found Manning guilty of 20 charges is not a surprise. Manning himself had pled guilty to 10 lesser offenses the day he read his statement, pleading to “unauthorized possession” and “willful communication” of most, but not all of the items he was accused of leaking. On several of the charges — notably, Manning’s leak of a video of Americans shooting a Reuters journalist — Lind accepted Manning’s lesser pleas.

Moreover, Lind had refused to throw out charges — including the aiding the enemy charge — that Manning’s defense argued the government had not substantiated. Lind had also changed the wording of three charges against Manning after the end of the trial, adjusting them to the evidence the government had actually submitted at trial.

And today’s guilty verdicts don’t tell us how long Manning will serve for his effort to alert Americans to what he believed to be potential long-term drawbacks to our counterterrorism and counterinsurgency policies. The proceeding will immediately start a sentencing phase, with more witnesses testifying for both sides, though many of the government’s witnesses will testify in secret. With the maximum charges on his guilty verdicts, he could spend the rest of his life in prison (journalist Alexa O'Brien tweets the maximum sentence could be 136 years).

But the big news — and very good news — is that Manning is innocent of the aiding the enemy charge. That ruling averted a potentially catastrophic effect on freedom of speech in this country.

As ACLU lawyer Ben Wizner explained last year, the aiding the enemy charge threatened every single soldier who spoke publicly. “Article 104 is not limited to sensitive or classified information — it prohibits any unauthorized communication or contact with an enemy,” Wizner explained. “So, if the government is right that a soldier ‘indirectly’ aids the enemy when he posts information to which the enemy might have access, then the threat of criminal prosecution hangs over any service member who gives an interview to a reporter, writes a letter to the editor, or posts a blog to the internet.”

Moreover, a charge of “aiding the enemy” is not limited to military figures. Civilians, too, can be charged.

Nor would the charge have been limited to outlets like WikiLeaks. While in its closing arguments, the government tried hard to describe WikiLeaks as different from other news outlets, when asked in a hearing in March whether the government would have charged Manning with “aiding the enemy” had he leaked directly to the New York Times, they said he would.

There is one more significant detail in Lind’s ruling today. In addition to aiding the enemy, the one other charge she found Manning innocent of involved leaking a video of a civilian massacre in Garani, Afghanistan. While Manning admitted accessing the video, the government insisted he had leaked it months before Manning admitted to accessing it (and before forensic evidence showed he had). This claim — one Lind said they did not prove — was key to their claims that Manning had planned to leak to WikiLeaks from the start of his deployment to Iraq.

Thus, while Manning was found guilty on 20 charges, the government’s efforts to use this case to implicate WikiLeaks as a spy suffered a setback with this innocent ruling.

In the government’s closing argument, Prosecutor Major Ashden Fein described Manning using a term the government had not proven, must less charged: traitor. “Your Honor, he was not a whistleblower; he was a traitor. A traitor who understood the value of compromised information in the hands of the enemy and took deliberate steps to ensure they, along with the world, received all of it.” Manning did, according to his own confession, take deliberate steps to pass valuable information on to us. According to the government, that means he aided the enemy.

Yet, a military judge, who otherwise sided closely with the government in this case, refused to uphold that interpretation.