Glenn Greenwald to Jeffrey Toobin: You're "calling for the end of investigative journalism"

Toobin agreed with the Bradley Manning verdict, saying that the WikiLeaks source "should be going to prison" 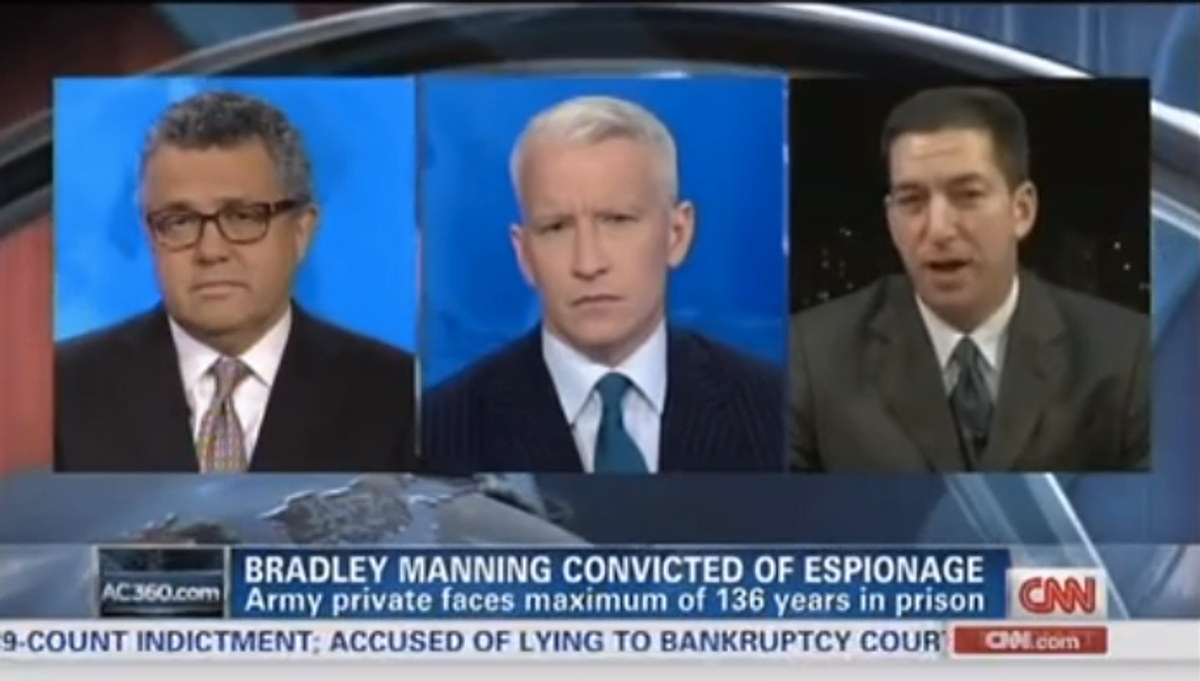 Guardian reporter Glenn Greenwald, who first broke the NSA story and has written extensively about cybersecurity, argued with New Yorker writer Jeffrey Toobin over the sentencing of ex-Army Pvt. Bradley Manning on "AC360" last night. Manning, 25, was convicted of 17 of 22 charges for leaking classified military information to WikiLeaks, and though he was acquitted for the most serious charge of aiding the enemy, faces up to 136 years in prison.

Toobin largely supported the verdict, saying, "He should be going to prison and he will be," but Greenwald argued that Manning was merely doing the job of an investigative journalist. "If you're sufficiently rich and powerful and well-connected in Washington, the laws don't apply to you. You don't get punished. The only people who do are people like Bradley Manning," said Greenwald. He compared Manning to investigative journalist Bob Woodward, an industry veteran who has reported leaks from Washington officials throughout his illustrious career.

"What Bradley Manning did is the job of journalists, which is to bring transparency to what the government is doing," said Greenwald.

Toobin disagreed, saying, "It's not up to Bradley Manning to make the decision to disclose this." If something is labeled as classified by government officials, argued Toobin, "I trust their judgment about what's a secret a lot more than I do Bradley Manning's."

"You can make that argument about every leak case," rebutted Greenwald, citing Daniel Ellsberg, who leaked the Pentagon Papers to the American public. "And yet what Daniel Ellsberg did was expose systematic lies in the part of the U.S. government."

Greenwald tore into Toobin, explaining, "This is how investigative journalism works, Jeff."

"People inside their government with a conscience come forward when they find out things that their government is doing are wrong and they disclose it to the world through media outlets and journalism. If you think that's criminal, you're essentially calling for the end of investigative journalism."