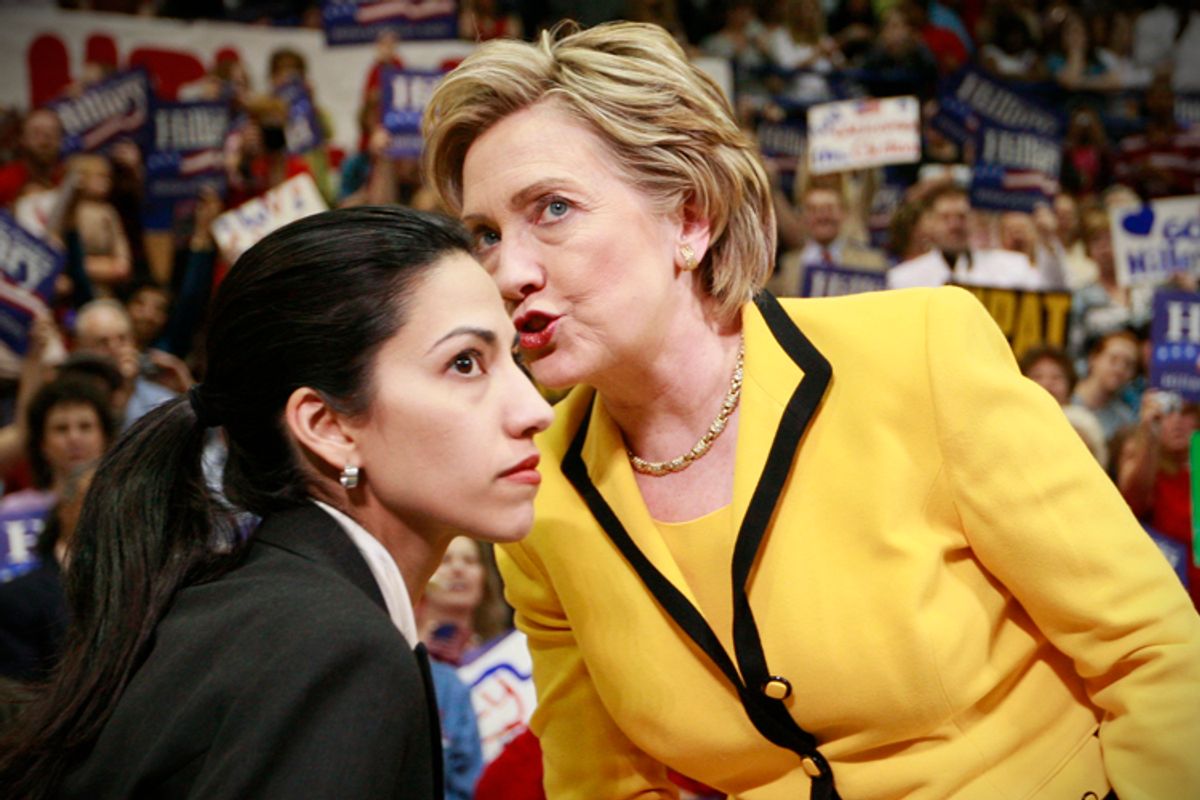 One week into Round Two of the Anthony Weiner embarrassment, mainstream media figures are reminding us that to them, the single most important fact about former Secretary of State Hillary Clinton is that her husband cheated on her. No matter that she’s been the two-term senator from New York and a presidential candidate who won 18 million votes, along with serving a term as Barack Obama’s secretary of state. She will always first and foremost be the wronged wife (who might have been to blame for her husband’s transgressions since she didn’t divorce him).

From Maureen Dowd to Jennifer Rubin to the increasingly unhinged Sally Quinn (and even the normally excellent Maggie Haberman), far too much Weiner coverage is being framed as all about the Clintons. Now, let me be fair: These writers aren’t inventing a connection. Weiner’s wife, Huma Abedin, has worked for Clinton for years and continues to, running her small transition office. So they’re not just casual friends or colleagues. Bill Clinton even presided over the couple’s wedding, which in hindsight was probably not the best omen for a drama-free romantic partnership.

But the extent to which the Weiner scandal is given national political importance because of Abedin’s relationship with Clinton is stunning. “Now, defining deviancy downward, Señor and Señora Danger are using the Clinton playbook,” Dowd wrote, calling Weiner “the ‘Rosemary’s Baby’ of the Clintons.” A Clinton friend reportedly predicted to the New York Times columnist, “The hard stink of this one is going to get on everyone involved.”

Including Dowd. Criticized for the column, she followed it up with another one stunning in its misogyny, especially since penned by a woman. Here’s my favorite line: “After years of literally following in Hillary’s footsteps, little did Huma know how fully she would follow in Hillary’s footsteps.” So clever.

Mitt Romney booster Jennifer Rubin insists Abedin "learned all the wrong lessons from Hillary." But now the Clintons, "having distinguished themselves in the art of placing political ambition over fidelity (and the serial lying that accompanies it), " must "watch from the sidelines as amateurs Anthony and Huma refuse to vacate the stage."

Sally Quinn might be the worst. Attacking Abedin, Quinn posited: “She saw the Clintons get away with infidelity, and she fooled herself into thinking she and Weiner could also ride this one out.” Given that Quinn took up with her husband, Ben Bradlee, before he was divorced from his last wife, that’s kind of brazen. Are Dowd and Quinn trying to say that Hillary schooled Huma in defending a cheating husband, or are they to blame for his cheating to begin with? It’s hard to tell, the contempt – and lack of self-awareness – is so strong in both once-admired columnists.

Unsurprisingly, Maggie Haberman’s take was smarter, looking at both the personal and professional concerns about Abedin, as Clinton’s friend and staffer, within Hillaryland. But even Haberman insists that “the intense focus and parallels that pundits have drawn to Bill and Hillary Clinton’s own marital issues, several Democrats with ties to the Clintons said privately, could become an issue for Hillary Clinton.” Of course, it’s those other pundits drawing “parallels,” not Haberman herself, but she has no choice but to write about them. Seriously, I’m not arguing that there’s no story to be written, but it’s striking to me how naturally reporters accept that the strange Abedin-Weiner marriage has some innate connection to the Clintons’ troubles.

Still, it must also be said: The "friends" of Hillary who are hand-wringing about this to reporters are not helping their alleged friend. Short of bodily harm, I'm not sure there's anything the Clintons can do to get him out of the race. At some point, they've got to just shrug it off. The more energy they or their defenders spend talking about Weiner and Abedin, the more they feed the perception that it's their problem.

Anthony Weiner is going to have to go away sooner or later – and maybe sooner, thanks to his NSFW communications director Barbara Morgan, who trashed former intern Olivia Nuzzi for her writing about the Weiner campaign in terms that were particularly cruel and unfortunate, given her boss’s history of preying on women Nuzzi’s age. Weiner can’t fully be blamed for Morgan’s tirade, except it shows that he hasn’t even been able to assemble a team of competent people to run his campaign.

It’s unlikely Weiner’s colossal idiocy will be any kind of factor to voters in 2016, should Clinton decide to run for president. But the media’s insistence on dragging her into the story should remind us of its insatiable capacity for Clinton-sliming, and its remarkable ability to believe the absolute worst about the first couple. That could imaginably make Clinton think twice about running.

It should actually make the Beltway mob think twice, but that’s unthinkable.