15-second commercials are on their way to the social network. How long before users rebel? 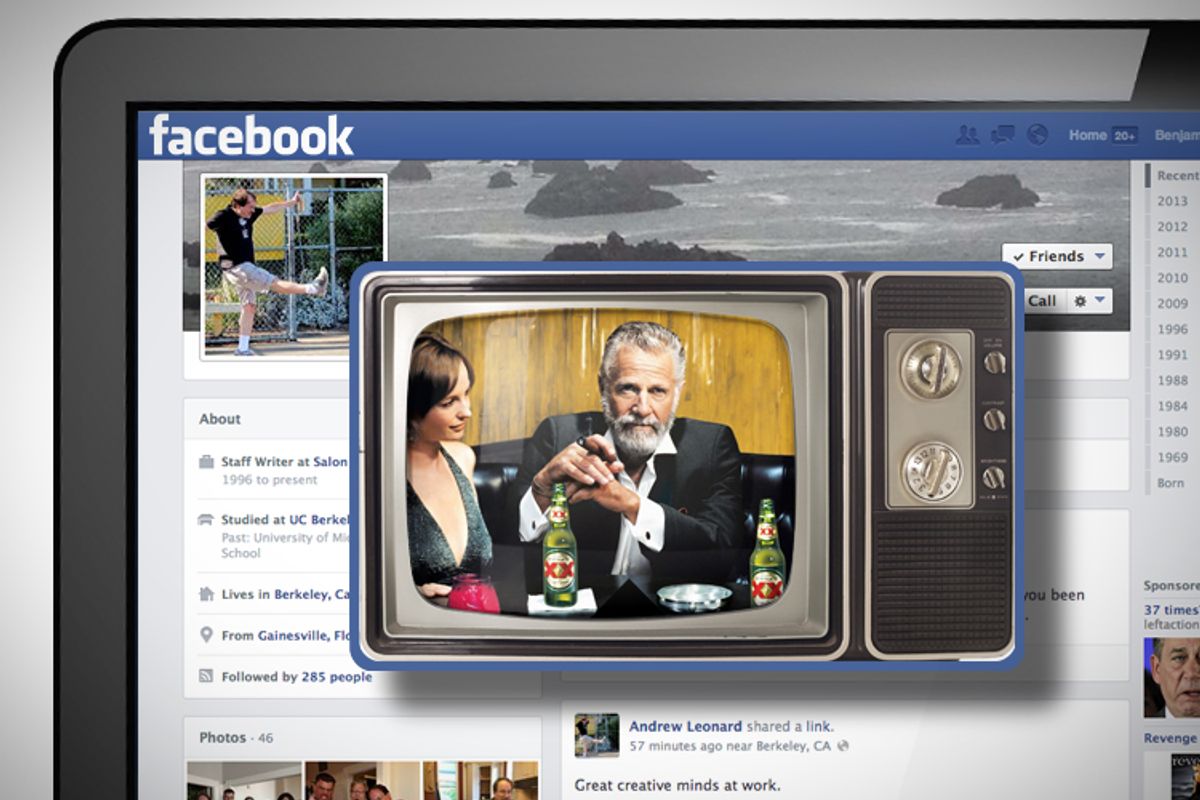 Facebook currently boasts 1.15 billion users. I'd really like to know: Excluding those lucky souls who are also Facebook shareholders, is there a single one who is excited about the news that Facebook will soon be rolling out 15-second TV-style commercials in its news feeds?

Investors appear to be happy about a Bloomberg report that Facebook plans to charge as much as $2.5 million for each ad. The same morning the news broke, Facebook's stock price finally clawed its way back to its IPO offering level of $38.

But there are some important unanswered questions about the new ads. Will users be able to stop them from playing immediately after they start, or be forced to sit through all 15 seconds? Will users be able to indicate to Facebook that they don't want to receive ads from particular advertisers?

According to Bloomberg, Mark Zuckerberg has pushed the start date for the TV ads back "at least twice, wanting to make sure Facebook’s user experience won’t be tainted by the ads." Zuckerberg is purportedly "sensitive to how users react to advertising in general."

Such sensitivity is warranted. Auto-playing TV-style commercials that intrude into the Facebook news feed will by definition downgrade the user experience. Again, no one who does not stand to financially benefit from the advertising actually wants this to happen. At best, we'll grumble and acknowledge that there's always a price to pay for any service. At worst, we'll use Facebook less.

Although, to be fair, even as Facebook has ramped up its news feed advertising, growing user dissatisfaction does not seem to have materialized in any quantifiable way. Facebook reported healthy gross revenue and net income numbers for its second quarter, along with strong growth in mobile usage. The numbers don't appear to lie: Facebook's ads aren't killing the golden goose yet.

“One of the things I watch most closely is the quality of our ads and people’s sentiment around them,” Zuckerberg said. “We haven’t measured a meaningful drop in satisfaction.”

But that brings me to a puzzle. In May I ranted about how I wasn't able to turn off Facebook's spammy dating ads on my smartphone. A few days later, Facebook promised that a new update of its mobile app would allow for better control of the advertising experience. For a week or two, I tested the upgrade by doing my best to hide ads and indicate to Facebook I never wanted to see ads from those particular advertisers again.

I just now realized that I haven't seen a mobile Facebook ad for several weeks, while other Facebook mobile users are reporting seeing as many as three advertisements per the first 20 posts on their feeds. The implication is that Facebook's algorithms finally figured out that I really didn't want to see ads -- and is respecting that. If the same holds true for the TV commercial launch, then I will have to give credit to Facebook for pulling off something truly unexpected: giving users meaningful control over their Facebook advertising experience.

But I still don't understand how that can work in the long run. If Facebook users figure out how to turn off ads, how will Facebook be able to charge millions of dollars for them?