Why the GOP can't win millennials with GIFs 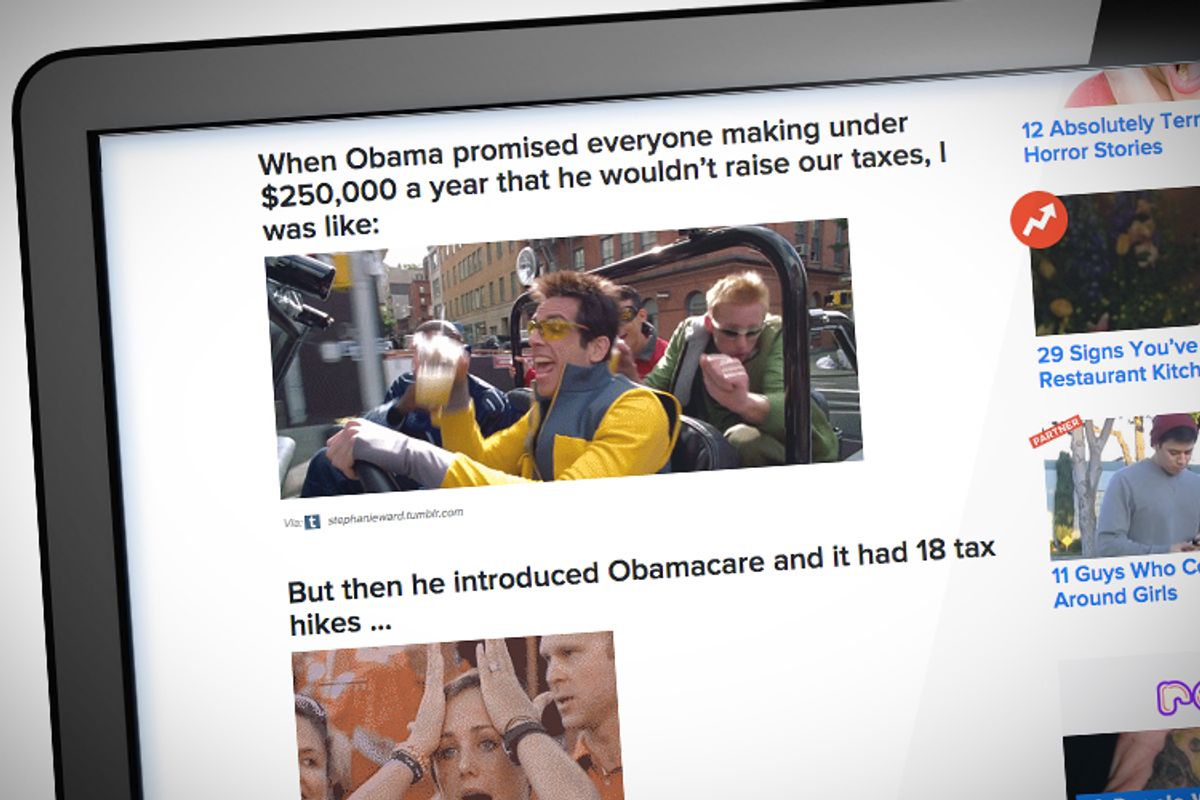 The Heritage Foundation's GIF-tastic listicle on BuzzFeed explaining why young people should hate Obamacare is coming in for mocking, thanks to its heavy-handed attempt to appeal to the youths much like, Tommy Christopher quips, "a narc walking around a frat party asking 'fellow young people, where can I obtain an enjoyable reefer cigarette.'"

The post is actually kind of funny and nails the BuzzFeed style. And it was probably even made by a real live young person, since Heritage has enough of them around to necessitate having a dorm next door for its interns. But just as a narc would still be a narc even if he blended in perfectly with the stoners, Heritage's message on Obamacare will never sell to young people as long as Obamacare helps young people. Just as with the social conservative plan to "make abortion funny," the medium only goes so far if the message is wrong.

It's easy to see why conservatives need to enlist the youth in their fight against Obamcare. The fate of the law is dependent upon enough young adults enrolling in insurance programs to keep the costs down for everyone else. Since they're cheaper to insure, young and healthy people effectively subsidize older and sick people. If lots of young people leave the pool, premiums will go up, pushing more young people out, thus raising premiums once again, and so on in a premium "death spiral."

So, Heritage may be thinking, if we can keep enough young folks from buying health insurance, you could theoretically make Obamacare collapse under its own weight. That may also be the thinking at the National Review, FreedomWorks, Americans for Prosperity, conservative blogs and others on the right who have been fighting so hard to make the case that Obamacare is bad for the Obama generation. Heritage's listicle is just the latest, weirdest attempt to reach millennials.

Fortunately for the White House, there's little chance Heritage's GIFs will destroy Obama's signature accomplishment. The message in Heritage's listicle, and all the other conservative programming directed to young people, is a slight tweak on the right's standard anti-Obamacare line: It will raise taxes, force you to change doctors and insurers, add to the deficit, increase healthcare costs, and by the way, implementation is a train wreck. But this is a message for the haves, worried about the government taking away what they already possess, while many young people are still have-nots, more concerned with getting decent jobs and healthcare in the first place than government meddling with it.

Young people disproportionately lack heath insurance, and visit doctors less often than older people, so they're less likely to be concerned about Obamacare forcing them to change doctors or insurance companies, and are less concerned about healthcare costs. If you visit your doctor once a year for a physical, and have few if any prescriptions, messing with the status quo isn't a big deal.

But more important, Heritage completely ignores everything the law does for young people. For instance, about 90 percent of uninsured young adults will qualify for Obamacare subsidies. And the listicle doesn't mention that the law lets kids stay on their parents' health insurance plan until the age of 26. Indeed, the number of young people lacking coverage has fallen since the law went into effect, though still remains higher than for older adults.

“Generally, we think the Affordable Care Act is going to have a lot of positive outcomes for young people,” Jen Mishory of the youth healthcare advocacy organization Young Invincibles told the Washington Post. Heritage has no response to this.

Meanwhile the economic arguments also ring hollow. The unemployment rate for 18-29-year-olds in June was 12.7 percent, way above the 7.6 percent national rate. And wages have stagnated for young people, who in 2010 made $5,000 less than in 2000. At an average salary of under $40,000 a year, most millennials pay little in taxes. As polls explain, keeping taxes down isn't exactly a big concern. And millennials consistently and overwhelmingly favor raising taxes on the wealthy, where most of the tax burden for the Affordable Care Act will fall.

Ironically, the Heritage listicle completely misses the most compelling argument for why young people should oppose Obamacare -- that it will increase their premiums as it caps older people's rates. There's debate about how much more young people will have to pay, and whether they'll actually feel it with all the subsidies, but they probably will have to pay something.

Still, polls show a large number of young people, including those who lack health insurance now, think having coverage is important and say they want it and will buy it if they can afford to.

But perhaps the biggest problem with efforts like Heritage's or FreedomWorks', is that they're suggesting young people should go without health insurance. That's hardly a winning message.