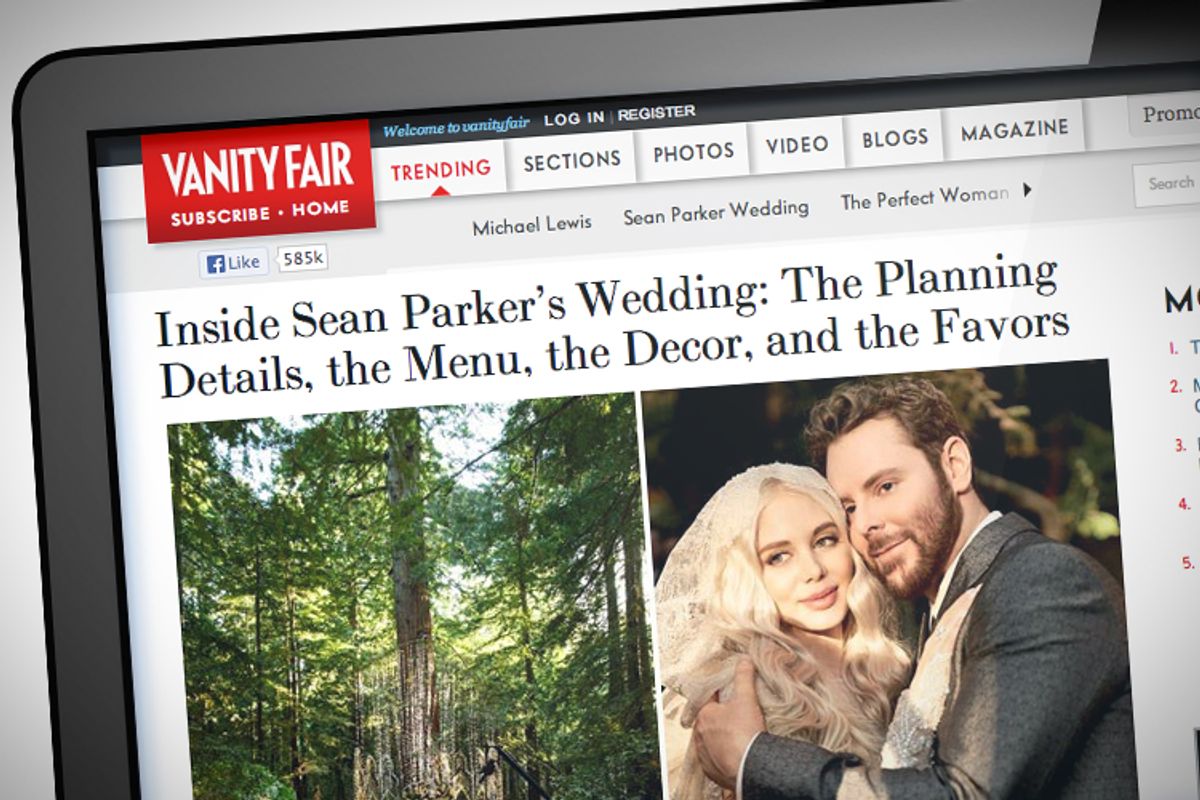 Spoiler warning: If accounts of excessive displays of extreme wealth make you nauseous, you may want to skip the following summary of David Kirkpatrick's report on Sean Parker's wedding in Vanity Fair.

I will not rehash here the whole controversy about whether Sean Parker's wedding was an environmental atrocity or a loving homage to redwood nature. All I'll note is that David Kirkpatrick's book, "The Facebook Effect," was the most fawning account of the rise of Mark Zuckerberg that I have read so far, so I can see why he was a good choice to a: be invited to the wedding and b: write about it for Vanity Fair.

"Parker himself oversaw all aspects of the event, from décor to lighting, to conceiving a leather-bound keepsake volume for attendees (relating the “fairy tale” of the couple’s romance) and selecting its design, in part, to evoke the invitation to the 1953 coronation of Queen Elizabeth II."

"People literally gasped as they emerged into a glade in which planted flowers and hanging garlands conferred a riot of color and a sense of undulation."

"A pen of bunnies was nearby for anyone who needed a cuddle."

"Sting erupted a cappella in an impromptu version of his song 'I Was Brought to My Senses.'”

"From the start, Parker and Lenas had sought to avoid the spotlight..."

That might be my favorite line. You invite Sting, the attorney general of California, and Lars Ulrich to a wedding that you spend 4.5 million on and that ends up getting written up in Vanity Fair, but all along, you wanted "to avoid the spotlight."

Every couple wants their wedding to be a magical, beautiful moment that they and their guests remember forever. But if you design something to be a parody of conspicuous consumption that dazzlingly encapsulates the ongoing class stratification of American society, you're going to have to live with that forever, too.