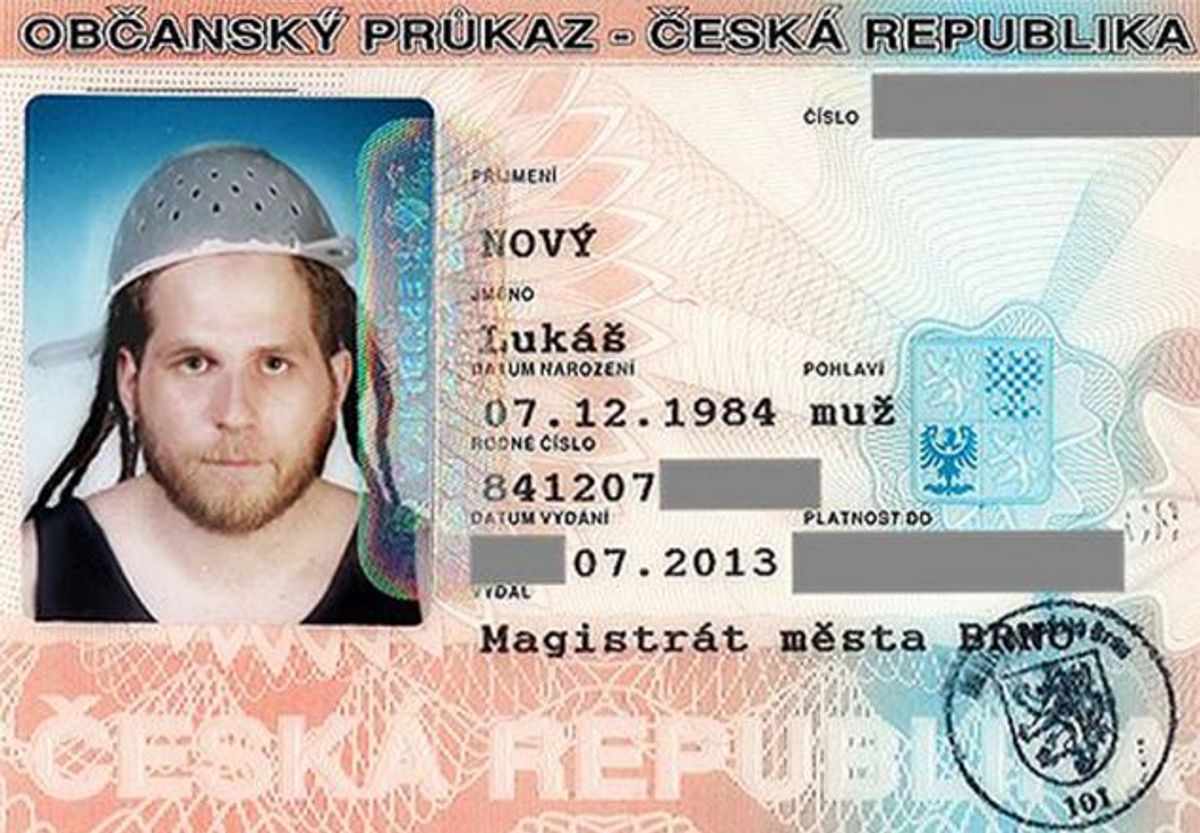 Lukas Novy claims that his Patsafarian faith means he is forced to wear the sieve at all times.
--

In some countries, cooking is like a religion. In the Czech Republic, it apparently is.

Lukas Novy, a Czech "Pastafarian," has legally won the right to wear a spaghetti strainer in his official government ID card photo, citing religious reasons, as a devout member of the Church of the Flying Spaghetti Monster.

What is Pastafarianism, you ask? According to their website, the satirical sect was formed by a bunch of peaceful pirate explorers with a penchant for beer, ruled by an invisible noodly monster who "boiled for your sins."

Surprisingly, it's not the first time a government has recognized Pastafarians' sieve-donning habits as being as legitimate as any other religious practice.

A spokesperson explained that Novy's crockery “complies with the laws of the Czech Republic where headgear for religious or medical reasons is permitted," as long as it doesn't cover his face, reported Think Progress, which rightly raised the issue of the legitimacy in religious liberty claims:

Obviously, this is an intentionally absurd story of a man finding a legal loophole and exploiting it in a humorous (and harmless) way. But Novy’s Pastafarian ID card does speak to a broader problem facing any religious liberty regime: a religious liberty regime must be able to sort legitimate religious objections from attempts to game the law. In the United States, for example, individuals claiming they are exempt from the law due to religious objections must base those objections in “sincerely held” religious beliefs — not in a non-religious belief, a made up belief, or a prank. The alternative to policing this line is virtual anarchy, because without it anyone could raise virtually any objection to virtually any law and receive a religious exemption from having to comply with it.

It is presumed that tonight, hundreds of thousands of self-listed Jedis around the world will help celebrate Novy's small win in the battle for freedom of expression for all religions, hoping perhaps that soon the time will come when their own saber-wielding ways will be enshrined in legislation.