The Chromecast future of TV is awesome 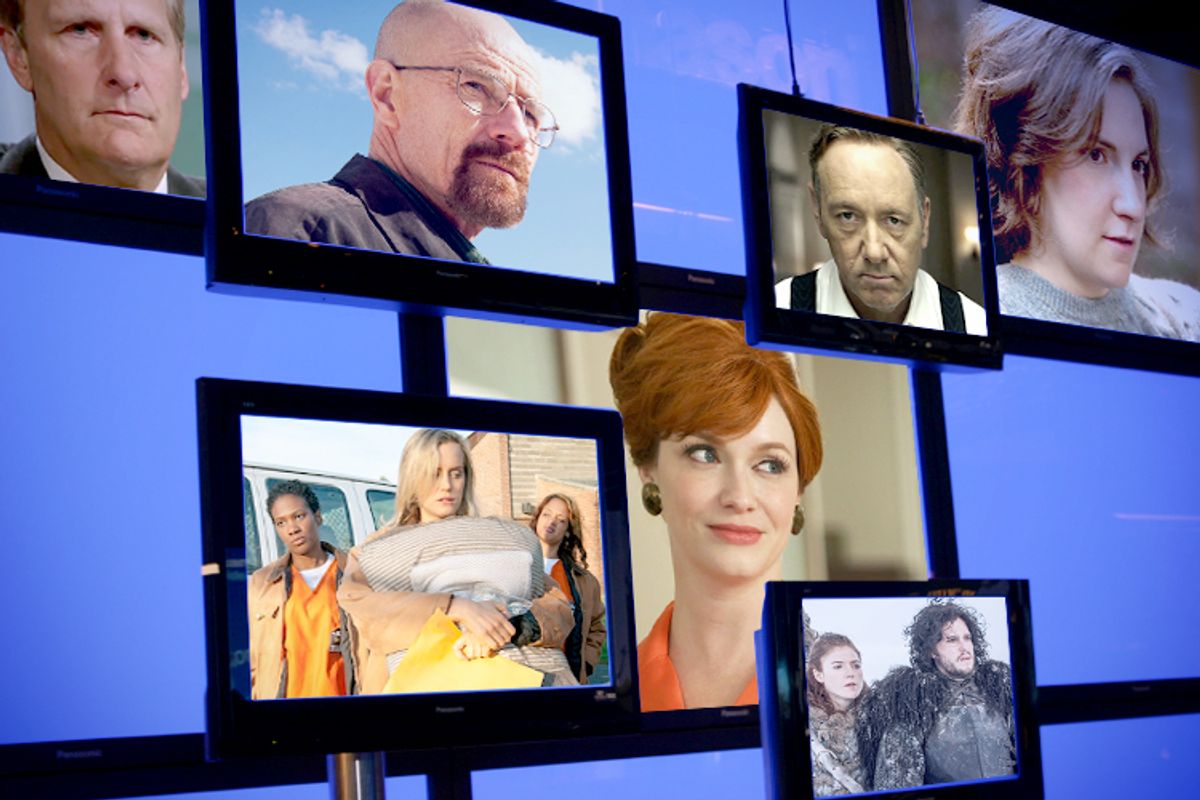 I just cut a cord Thursday morning that I had only brought home from the Apple Store a week earlier. Does that make me TV's worst nightmare, or harbinger of better entertainment times than ever?

When I bought a new MacBook Air last week I also purchased a 13-foot cable that connected the Air to my TV. Because, you know, Netflix on a 46-inch screen is a considerably more pleasant experience than on a 13-inch screen.

And it was mostly great. I didn't like the ungainliness of having a cord stretch across the living room from the back of the TV to my coffee table, and a laptop, even an Air, is hardly an ideal remote control device. But it was still a sweet way to connect the Internet on my laptop to my TV. I celebrated by binge-watching six straight episodes of "Orange Is the New Black."

Then, just a couple of days later, Google announced its Chromecast gizmo (aka "dongle," or "fob") -- a stylish $35 device not much bigger than your typical thumb drive. I purchased one immediately. It arrived yesterday. It plugged directly into my TV's HDMI port. After a relatively painless setup procedure, I was able to watch Netflix and YouTube videos from my iPhone on my TV. The phone was the remote control. With Chromecast any Wi-Fi-capable device can stream to the TV. My new $60 cord suddenly looked like a terrible investment.

The full integration of TV and the Internet has been tantalizing us for years. Chromecast is hardly the end point of this inevitable convergence -- although, for the moment, it is certainly the cheapest way to get close. We can and will have nice, geeky arguments about the relative merits of Chromecast versus Apple TV and Roku. ("Casting" browser tabs from my laptop to the TV, for example, was an unsatisfying, pixelated experience, and doesn't work at all from the iPhone.) Eventually we won't need any new gadgets at all. Every new TV will include built-in Chromecast or Airplay connectivity to our wireless networks and the ability to play anything we want from the Internet.

But the moment when the theme song from "Orange Is the New Black" (Episode 7) started playing on my TV, while I sat back on the couch with my iPhone in my hand, still felt significant. The same device that allowed me to choose my programming, pause it, and change the volume was also the device I was using to tweet and post on Facebook about the experience, or go to IMDB to get more information about the actors.

Mobile nirvana! During the setup process, when prompted to name my Chromecast device, I called it "FutureOfTV." Throw away your old remote controls, cancel your cable TV subscriptions, let your satellite dishes rust. All you need is Internet access, your phone and your apps.

And don’t worry. Because TV, which is already darn good, is going to be better than ever.

The phenomenon of "cord-cutting" pertains to the growing tendency of millennials to dispense with cable or satellite TV subscriptions and landlines and rely primarily on the Internet and smartphones for all video consumption and communication needs. In the specific realm of TV, with Netflix, Hulu, YouTube, ESPN3 and an ever-increasing slew of other streaming video providers joining the party every week, the economic case for paying a big monthly fee for an indiscriminate smorgasbord of entertainment programming has been harder and harder to make.

There's been an endless amount of industry hand-wringing over this, because of the obvious question: Who will pay for the production of quality programming if the revenue streams that support the current model dry up. If we won't pay for cable and we're avoiding commercials entirely while watching Netflix, or just whiling away all our hours on free YouTube channels, how does the beast get fed?

But there's a paradox. Even as cord-cutting has grown, the quality of television programming has reached what many believe to be an all-time high. As I write these words, it's the middle of summer, traditionally the deadest time of the year for television. And yet TV critics and viewers are frothing at the mouth over "Orange Is the New Black" and "The Bridge" and the imminent arrival of the final season of "Breaking Bad." For someone who came of age in the late '70s, the current wealth of options is almost inconceivable. There's too much to keep up with. There's a national my-DVR-is-too-full crisis!

There are many competing theories and no consensus about why TV has gotten so good. But here's my pet favorite: competition, aided and abetted by the second screen. Near infinite choice, combined with the potency of our social-media grapevine, means not only that quality is recognized instantly, but that quality is required to stand out in a sea of possibility.

Devices like Chromecast add further supporting infrastructure to this trend line. The millennial generation and those that come after it will simply assume that they can sit down in front of their TV with their phone, and click their way to whatever they want to watch. They will also concurrently snark at or bliss out over those shows on the social media platform of their choice, providing the instant buzz that determines what's a hit and what's a dud in these increasingly critical times. "Orange Is the New Black" arrived on Netflix with a minimum of hype or fanfare. But it became an instant hit. The journey from an explosion of positive tweets to an all-night binge-watching session is a very short one.

Armed with the second screen, with these more-powerful-than-a-Harry-Potter-wand smartphone remote controls, a generation born with short attention spans is unlikely to be assuaged by mass-marketed pablum. They're also increasingly unwilling to throw down a lot of cash for programming that they have no interest in. Any network that wants to survive will have to keep upping the ante. This is the future that Netflix has embraced, with its stunning pivot to original dramas (not to mention its easy integration with Chromecast). It's the same future that HBO, for now, has rejected. If you want HBO you have to get it through a "participating television provider." In other words, to get "Game of Thrones" you have to pay for a whole bunch of stuff you don't want from Comcast or TimeWarner or DishTV or DirectTV.

Of course, HBO's strategy directly drives younger viewers to unauthorized sources of content. I haven't yet tried to watch a torrent of "Game of Thrones" using Chromecast, but it certainly appears to be possible (on one's laptop, al least).

It is simply impossible to imagine HBO's strategy surviving in a future when we can pick and choose from a vast palette of programming choices, from the comfort of our phones or tablets. The best interface and the best content at the best price will win. It already is. Our TV shows are improving because if they don't, we'll spend our free time playing games or watching YouTube videos or reading each other's status updates. (Or doing all those things simultaneously.)

Chromecast was a hit from the moment that tech reporters assembled at Google's dog-and-pony show. Orders for the product poured in so fast that Google was forced to cancel its three-month free Netflix promotion within 24 hours of the initial announcement. The reason for the excitement? Everyone can see that the end point is in reach: seamless, easy integration of all our entertainment choices through whatever technological device we prefer. That consumer wonderland will be a huge challenge to the providers of entertainment. Big marketing budgets can no longer buy hits, as we've seen repeatedly with the supposed "blockbuster" movies of the summer. In the realm of infinite choice, quality, at the right price, is the only way forward. As I nestled on my couch, with my phone in hand, no cord in sight, that future seemed closer than ever.