Critics mock their pretensions, smells, even the space they take up. But they have very real benefits for cities 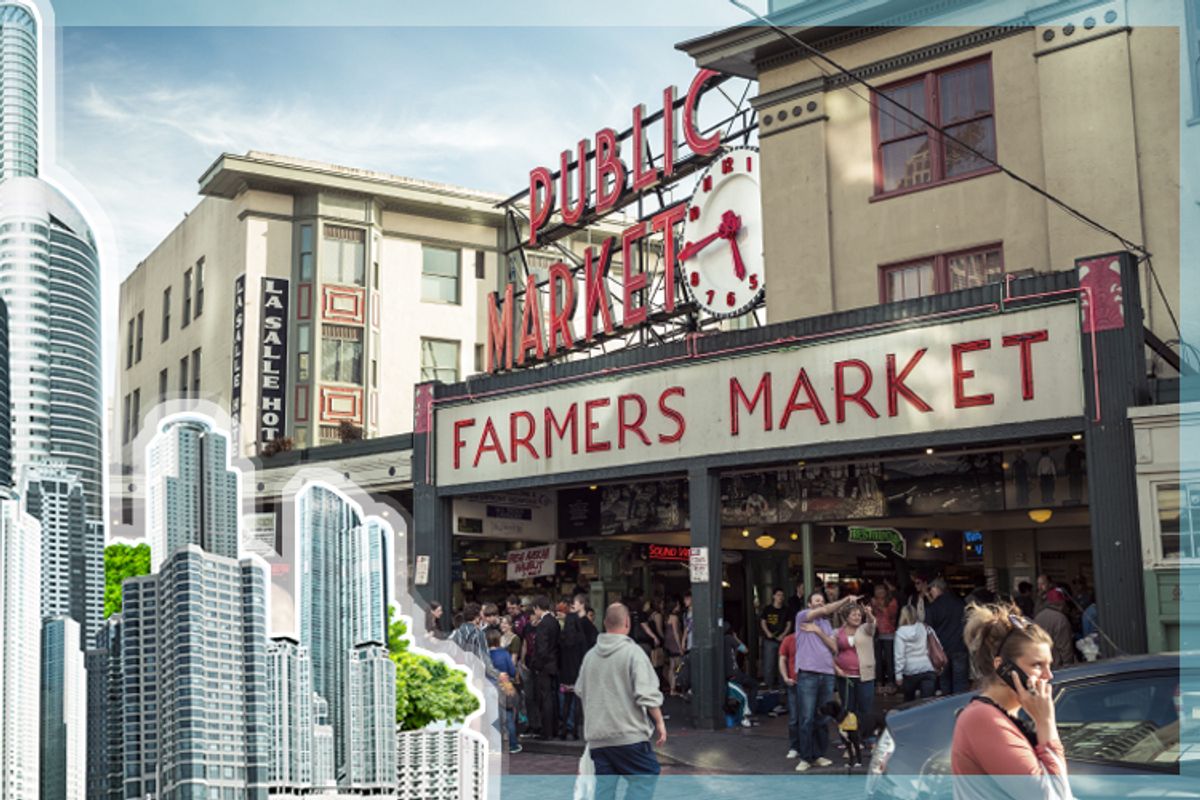 What would my forefathers say if they knew I waited for two hours to get into a fish market? They would probably find it ridiculous; perhaps you do too. I didn't even buy a fish.

But I wasn’t the only one. At 3:30 a.m. on a recent Tuesday, dozens of people had assembled outside the gates of Tokyo's Tsukiji Market. The attraction on this steamy summer morn -- like the day before, and the day after -- was the ritual auction of the tunas, the fish that feed the world's biggest city. The event has drawn such an audience in recent years that market officials have capped daily attendance at 120 people. But for those who make it in, a show awaits. This January, a 489-pound tuna sold for a record $1.7 million.

There are markets, and then there is Tsukiji, the Tokyo Metropolitan Central Wholesale Market, the epicenter of the global fishing trade and, more affectionately, Tokyo's pantry. Tens of thousands of buyers, sellers and other parties report here each morning. Approximately four million pounds of fish, from hundreds of different species, changes hands here daily – that’s one out of every five fish caught in the world. It’s the world’s second-biggest food market (after Rungis, outside Paris), and largest fish market. Aficionados liken a visit to a religious experience. Anthony Bourdain called it "life-altering." Environmentalists shudder at this most vivid manifestation of overfishing, a hard-to-grasp concept made real by the sight of one million fish packed in ice, the sound of frozen bluefins carved up by the bandsaw.

Tsukiji doesn't quite "explain the world," as the cliché goes, but like ancient haruspices, we can read signs in its harvest. Its defining qualities are the same ones we value in the city as a whole: 24-hour time; limitless selection; international relevance. In a city teeming with examples of superlative human density, including the world's two biggest train stations, the world's busiest subway system, and a skyline with few comparisons, Tsukiji is a source of local pride and foreign fascination.

And Tsukiji is not just a microcosm of the city, a lesson in global economics, a primer on marine life or a sensory spectacle. It's a study in one of the most obvious challenges of urban life: how do you feed a city where over 30 million people live within 30 miles of city hall?

After a century in which the cities of the developed world sought to banish wholesale markets from their streets, attention to food is resurgent. Many young Americans, in particular, have a passion for food and farming that baffles their parents and peers. In American cities, where the shift to the supermarket was strongest, the backlash has produced street markets, urban farms, community-supported agriculture and a burgeoning interest in the infrastructure of food production and distribution.

After a cursory look at Tsukiji, with its old-fashioned ways – ice-crushers that might have been drawn by Rube Goldberg, a transportation system possibly modeled after a game of bumper cars, and not a digital device in sight, at least for professional purposes – one is tempted to say the Tokyo market had the right approach all along. But Tsukiji, like its counterparts elsewhere, is slated to abandon its downtown location in the next couple of years. The same density that supports the wild aisles of Tsukiji will soon take its place. Does a market like this have a place in the modern city?

For most of human history, no one would have given the question second thought: cities needed dense, central marketplaces for food and other goods. The markets of Constantinople, Timbuktu, Baghdad and other medieval cities were legendary. But it was not until the mass urbanization of the 19th century, aided by increasingly efficient supply chains and advances in preservation, that the city could produce an awe-inspiring food market.

Every great metropolis had one, centrally located and bustling with a scale of commerce eclipsed only by the world's great ports. The most famous portrayal is probably that of the French writer Emile Zola, whose novel "The Belly of Paris" chronicled life at the city's famous Les Halles market. Equally impressive, though, were London's Covent Garden and New York's Fulton Fish Market. The three have something else in common: in the last fifty years, they've moved out.

Each decamped from a prime central location toward the margins, and for largely the same reasons. Wholesale food markets are dirty, noisy and smelly, and those externalities stretched well beyond the market itself into the surrounding blocks, as an increasing number of goods arrived by truck. Their neighborhoods became congested and cramped. But the complaints of merchants and neighbors do not a market move.

More importantly, urban planners and real estate interests saw their sites as golden opportunities for reuse. And why not? The locations themselves might have been legendary -- New York Gov. Alfred E. Smith used to brag he had obtained his degree from FFM, for Fulton Fish Market; Covent Garden was the stomping ground of Eliza Doolittle, working-class London personified -- but did they deserve so central a place in the lives of cities starved for space?

As wholesale markets were reimagined, a parallel shift occurred in retail food delivery, as one-stop-shops replaced butchers and bakers, and supermarkets absorbed the customer base of traditional markets. Now, online shopping in turn is eroding the support of brick-and-mortar groceries. Urbanites have fewer encounters with the food supply today than at any point in history.

You may rightly ask: So what? The hidden supply chain is a perk of modern urban living. I don't need to make a pilgrimage to a central market any more than I need to draw my water from the reservoir.

The reasons people patronize farmers markets differ, and it's true that the apostles of slow food are easy to caricature. But beyond the Bo-bo predilection for craft goods and vintage ways of life, farmers markets cater to a fairly diverse clientele, and confer tangible benefits on communities. They help small, local farmers; give consumers access to fresh and healthy food; put money back into the local economy; and reduce the environmental strain of long-distance shipping. They’re social events that strengthen neighborhood ties. The food at farmers markets might even taste better.

But they are far from changing eating and shopping patterns. Most occupy temporary locations in public or shared space, which makes it a challenge for them to mimic the selection (think meat, or dairy, or fish) or the reliability of their “landed” counterparts. And even once-a-week markets can draw NIMBY complaints from nearby merchants and other users of city space.

In search of permanent locations, farmers markets run into the same issue that dogs their larger counterparts: a developer could do better. If you’re going to devote space in a tightly packed city to a market, don’t model it after the old Covent Garden, but the new. Make it something like New York’s Chelsea Market, essentially an upscale shopping mall, or D.C.’s Union Market, a fading wholesale center successfully converted into a chic food court. James Rouse, whose enormously influential “festival marketplace” concept debuted at Boston’s Faneuil Hall, has proven that market vibes transcend the sale of food – especially groceries.

Even at Washington’s famous Eastern Market, a permanently housed, seven-day market hall which predominantly sells local meat and produce, the most popular stall is always Market Lunch, with its delicious blueberry pancakes. Any child waiting in the Sunday morning line would tell you what the market needs: fewer vegetables, and more pancakes.

That’s not to say that permanent, public markets are a thing of the past. Those that have survived, like Cleveland’s West Side Market, have ridden the current wave of popularity through financial difficulties. Some public markets are truly public, like Munich’s Elisabethmarkt, run by the city itself. New markets can be built too: A developer in Los Angeles plans to give downtown L.A. its first permanent farmers market. But only because his plans to recruit shops and restaurants didn’t work out.

In dense, high-value areas, the cards are not in the markets’ favor. Covent Garden now sells Apples instead of apples. Les Halles is a commuter rail hub, park and pedestrian mall. And the wharves along the Sumida River, when Tsukiji finally moves east into Koto Ward, will retain but a paltry reminder of what once was there: 100 shops selling fish and fresh produce.

The relocation won’t make much difference to those, like me, who come to watch the tuna auction. What’s two miles of travel before a two-hour wait?

But for the host of a Tokyo dinner party, looking to buy a fish? What a difference a mile makes.