Welcome inside the special, exclusive suite in the U.S. Capitol that’s closed off even to most members of Congress 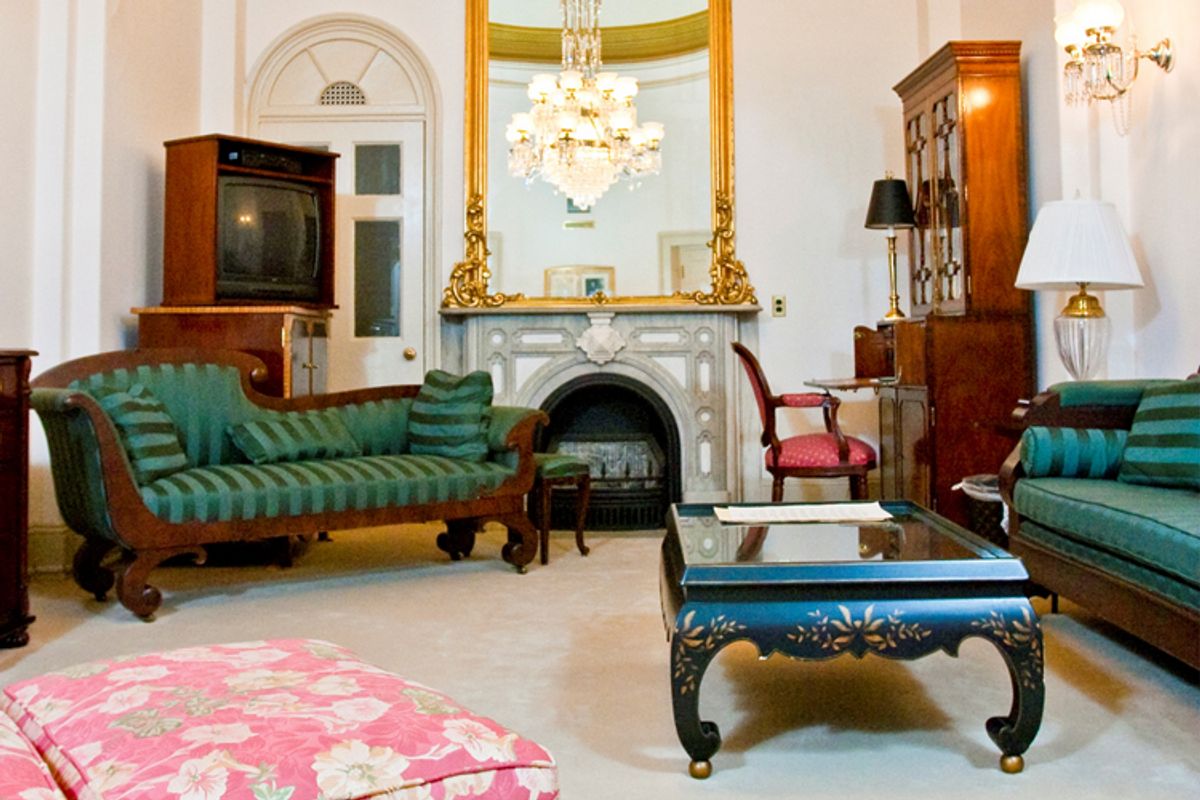 The Lindy Claiborne Boggs Room (The Office of the Clerk, U.S. House of Representatives)
--

Behind an unmarked door in the U.S. Capitol, camouflaged by the opulent marble figures in Statuary Hall, lies a special space unknown to most passersby. After tapping a secret code into a security keypad, the door opens into a small reception area and a suite of rooms exclusively for the use of women members of the United States House of Representatives.

In the U.S. Congress -- the original old boys' club -- the Lindy Boggs Reading Room provides women lawmakers with their own private retreat from the rest of the Capitol. It is a welcome respite for the growing ranks serving in the people’s house.

"The room has quite a rich history,” said U.S. Rep. Ileana Ros-Lehtinen, R-Fla. “The men have a big enough room in which to chat. It's called Congress. We just have the Lindy Boggs."

The Reading Room is the only bipartisan meeting space in the Capitol building dedicated to women members. During the day, Democratic and Republican members sit together watching the floor debate on C-SPAN and incessantly checking the latest emails on their iPhones. They review legislation that will be discussed in upcoming committee meetings on their iPads, or print something out on the ancient computer in the hall adjacent to the Reading Room. Copies of all the day’s national newspapers and the Capitol Hill gossip rags are placed on coffee tables in the Reading Room and in the entryway for members’ perusal.

“The members get along fairly well. Sometimes they get along very well,” said Susan Dean, who runs the Reading Room. “Sometimes they share committees, so obviously there is an interest in dialogue and getting to know each other better, and sometimes they are looking for co-sponsors. In times like that they are always more gregarious.”

But in the highly politicized and hyper-partisan climate that permeates Washington, things can get tense among the members, even in the Reading Room.

“Obamacare was my first and only situation with members coming to fisticuffs. They actually had their hands on one another in the powder room,” Dean recalled. “I said to the Democrat, you need to go through that door to Nancy Pelosi’s office and to the Republican, just go through Statuary Hall. And don’t talk to each other until we get through this. Everybody’s emotions are so high.”

More often than not the Reading Room serves as a place to escape drama, not to find it. Members frequently use the suite as a hideout. Members will hide from the press, dodge their own party leadership looking to nudge them toward voting one way or the other, and even try to escape from the parental overreach of their staffs. The Reading Room allows members to just sit and wait to go vote without worrying about whip-counts, fundraising events or what’s next on their overcommitted agendas.

“There is a constant cry from the public for bipartisanship but we have few opportunities to be together informally,” said Rep.Virginia Foxx, R-N.C.. “The [Lindy Boggs Reading Room] provides an opportunity for women to meet together, which is a good thing.”

The suite offers some pretty nice digs for the 80 women currently serving in the U.S. House. The suite contains four rooms: a bathroom, a narrow kitchen, a sort of nap room / sickbay affectionately referred to as “the toes up room” and the historic Lindy Boggs Reading Room.

The bathroom, which was the original impetus for the suite’s current renovation and use, contains rows of small cubbies like those found in elementary school art classrooms. The kitchen is seldom used for anything other than storing yogurts and granola bars and nuking frozen dinners. On nights where votes run past midnight, sometimes the lawmakers will split a bottle of wine or chat over a kettle of hot tea to decompress while they wait for the call to vote.

The “toes up” room is filled with chaise lounges that serve as upholstered cots. The room is mostly used by members when they are feeling under the weather or have pulled an all-nighter and want a catnap but need to stay close to the floor to vote.

The Lindy Boggs Reading Room itself is far more ornate and formal than the accompanying rooms in the suite. Its grand vaulted ceilings, dramatic crystal and glass chandeliers, and antique furniture, which date back to the early 1800s, are striking. It is hard to imagine members taking a load off and relaxing in the Reading Room, which is so immaculately preserved and delicate that at first blush one is hesitant to touch anything, as in a museum or a china shop.

To make it feel a little more like home, members bring in baby pictures of their children and grandchildren. The pictures are prominently and proudly displayed in the suite’s front entry under the portrait of Lindy Boggs, the former member of Congress who passed away last week at 97.

While the Congressional Women’s Caucus no longer meets in the Reading Room (because there are too many women to squeeze them into the space), many members still use it for non-political meetings and small social gatherings. The suite has played host to multiple members’ baby showers and even to a wedding reception. In cases of personal loss, the space has served as a sort of mourning area, providing a quiet reprieve for members who wish to let their guard down more privately.

The history behind the suite provides a rich and colorful backdrop for its current use. The Lindy Boggs Reading Room was formerly the office of the Speaker of the U.S. House. The original House floor was just on the other side of the suite’s front entry, in the majestic, marble-floored space now known as Statuary Hall.

The ranks of women congress members surged after World War II. In 1962, the growing caucus successfully petitioned House Speaker Sam Rayburn for use of the suite as their "powder room." Women members lacked a bathroom near the House floor, which created a hardship during long vote series.

According to House staff, in the 1960s what is now the Reading Room was simply a neglected storage space, so it wasn’t much of a concession to allow the women use of it. The women took it over, cleaned it up and made it their own. The office of the architect of the Capitol assisted the members in renovating the space and getting many of the historic artifacts that had been removed over the years back to their proper home in the Reading Room.

In 1991, the space was renamed the Lindy Claiborne Boggs Congressional Women’s Reading Room after the Louisiana congress member and U.S. ambassador to the Vatican. Among Boggs’ most lauded legislative achievements was winning the addition of the phrase “sex and marital status” to the list of anti-discrimination conditions in the 1974 Equal Credit Opportunity Act.

Boggs, known as a charming but shrewd politician, outmaneuvered President Richard Nixon in order to win the return of a chandelier and set of wall sconces that had originally hung in what is now the Reading Room. As the story goes, and is recounted by seasoned house staff and a few in-the-know tour guides, Nixon had the chandelier and wall sconces hung in the Indian War Room in the White House. Boggs asked that the items be returned to the Capitol so they could be put back in the newly renovated Congressional Women’s Reading Room. Nixon refused to return them so, in protest, Boggs used some procedural tricks to slow the pace of legislative business on the House floor. It was Washington’s version of a staring match and Nixon blinked first. Needless to say, the chandelier and the wall sconces hang in the Lindy Boggs Reading Room today.

Alongside the renaming of the Lindy Boggs Reading Room came legislation permanently dedicating the space to the exclusive use of women members of the U.S. House. Since the U.S. Capitol can accommodate no additions and adapting space to a new purpose must be done in a way that works with the existing façade and structural characteristics of each nook and cranny, winning permanent use of the space was quite a coup.

“We have to work with what is already there. It’s our responsibility to care for the historical fabric of the building,” said Eva Malecki, spokeswoman for the architect of the Capitol’s office. “We can’t put in plumbing where there is a historic mural.”

With 20 women, the most ever, serving on the Senate side of the building, another reading room coup may be underway. After the last election Sen. Claire McCaskill, D-Mo., tweeted about her bipartisan meet-up with two new women senators: “Too funny. First power meeting with [Elizabeth] Warren and [Deb] Fischer in the Senators Only Women’s bathroom. Gonna need a bigger bathroom.”