Shooting high for an environmental game-changer

Are “Vertical Forests” the new future of urban sustainability, or just one Italian architect's impossible ambition? 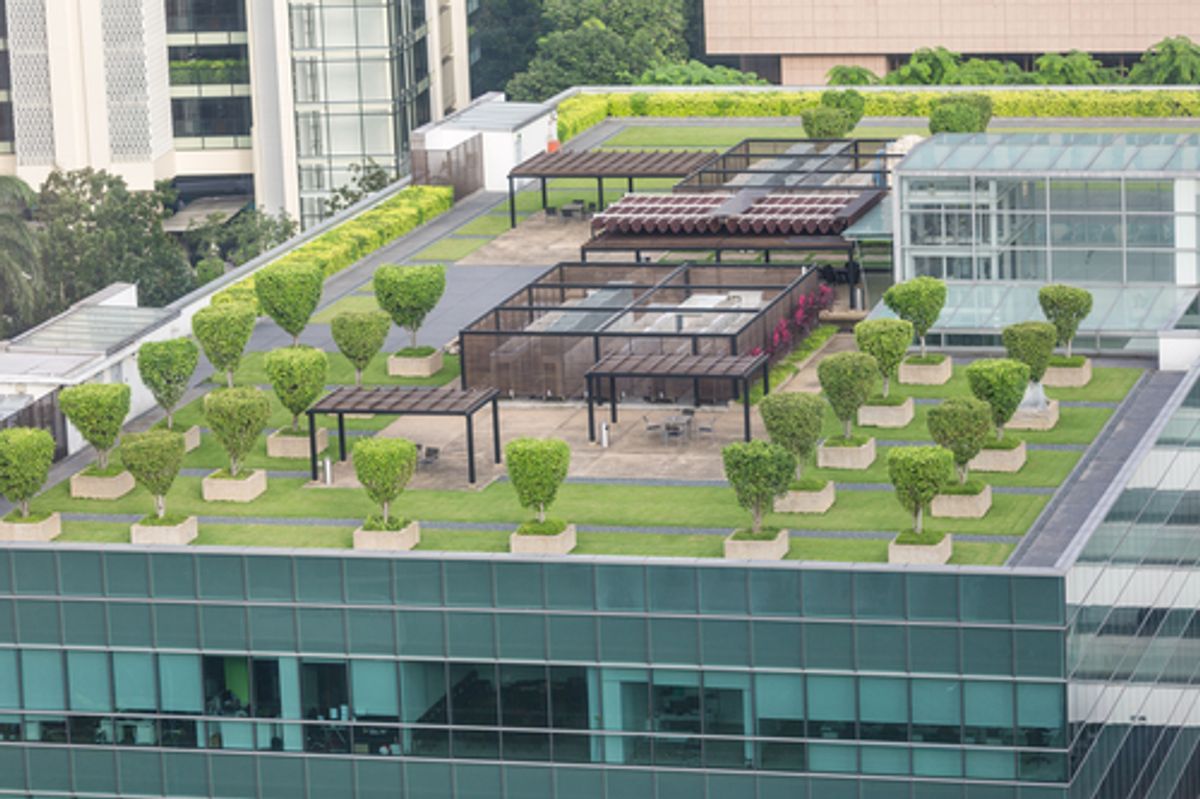 The name pretty much sums it all up: Bosco Verticale—Italian for “Vertical Forest.” Once completed, Italian architect Stefano Boeri’s two residential buildings—one 26 stories high and the other 18—will offer Milanese condo dwellers a unique chance to look out onto a lushly arboreal “landscape,” no matter what floor they live on. Other condo buildings might throw in free balcony furniture; at Bosco Verticale, they throw in free balcony trees. And we’re not just talking a four-foot potted ficus here. We’re talking big, leafy shade trees, like maples, beeches, cherries, and oaks that are anywhere from 10 to 20 feet tall.

Italy has an impressive track record when it comes to innovative, game-changing architecture. The ancient Romans, of course, gave the world aqueducts, triumphal arches, and—in the form of the Colosseum—a template for amphitheatre construction that led directly to our modern conception of outdoor performance spaces (including the Hollywood Bowl). In 1436, Filippo Brunelleschi solved a centuries-old structural engineering problem when he finally figured out how to builda giant dome that wouldn’t collapse under its own weight and that didn’t need to be supported by all those inelegant, Germanic-looking buttresses. Spurred on by his forebears’ triumphs, perhaps, Boeri now hopes to turn the attention of architects and engineers, once again, toward Italy.

His unprecedented—and controversial—project will eventually incorporate 900 trees, a variety of smaller shrubs, and flowering plants into its design. The only problem, argue critics, is that the design is impossible to execute and will almost certainly result in hundreds of dead and difficult-to-remove trees blighting residents’ balconies (not to mention neighbors’ views), rather than in the sylvan, thriving, upright thicket that the architect promises.

On his firm’s website, Boeri writes (in fluent Architectese, a global lingua franca whose roots can be traced to the ancient kingdom of Hyperbole) that his project and other, similar urban reforestation efforts are “devices for the environmental survival of contemporary European cities.” By his calculations, were his tower’s trees placed side by side, they would comprise two-and-a-half acres of forest. Bosco Verticale’s unique design, he goes on to write, “optimizes, recuperates, and produces energy,” and will ultimately help create a microclimate, produce oxygen, absorb carbon dioxide, muffle noise, contribute to plant diversity, and filter dust in one of the mostpolluted cities on the European continent.

It certainly does sound wonderful, and as you can see from photos of the nearly-completed project, it’s starting to look pretty wonderful, too. Nevertheless, once word got out about Boeri’s ambitious undertaking, it didn’t take long for some bloggers to question the practical sustainability of these soaring icons of urban sustainability.

Super-smart science writer Tim DeChant, who is certainly no cynic when it comes to urban reforestation efforts, initiated what has now turned into a spirited debate with a blog posttitled “Can We Please Stop Drawing Trees on Skyscrapers?” There DeChant listed the reasons why vertical forests of the sort Boeri is championing would never work—starting with the vicissitudes of weather (especially wind) at higher altitudes, and ending with the likelihood of nonfeasance or neglect when it comes to the issue of the trees’ maintenance and upkeep.

When NPR science correspondent Robert Krulwich heard the criticism, he defended Boeri with the same argument champions of innovative-but-risky ideas always use: sanguine futurism. Responding to DeChant on his NPR blog, Krulwich veered dangerously (and, apparently, unironically) close to the overblown language more typically associated with cultural manifestos. He gushed that Boeri’s twin towers are bold, grand, and environmentally important experiments. They’re “pioneers, new neighbors being asked to live with us in the sky,” he wrote. “Yes, we may stumble as we rise, but rise we shall. These towers in Milan will lead the way.”

Before long, other urban planning bloggers joined the discussion, which quickly morphed into a larger debate that had less to do with Bosco Verticale’s feasibility, per se, and more to do with the logic and accuracy of labeling any such high-rise forest “sustainable.” In a follow-up post, written shortly after Krulwich’s full-throated defense, DeChant attempted to refine his earlier argument by characterizing multi-story arboretums (and Boeri’s isn’t the only one in the works,by the way) as little more than headline-grabbing, skyscraping Potemkin villages, “distraction[s] from rampant development and deforestation … the soma in architecture’s brave new world of ‘sustainable’ development.”

In fact, DeChant wrote, “trees on skyscrapers will likely be anything but sustainable.” Just for starters: trees, dirt, and watering systems are heavy. Planters for the species Boeri has in mind will need to be deep—requiring not only more water for their upkeep, but more energy-intensive concrete and steel in the building’s construction. Not to mention that the transporting and lifting of 900 trees to their balcony aeries necessitates a fleet of trucks, cranes, and other carbon-emitting vehicles, a logistical reality that at the very least complicates the idea of the trees as effective carbon-capturers.

By the time he was finished, DeChant had all but accused Stefano Boeri of erecting a verdant, vertical Versailles: attractively green-washed, yes, but conceived in decadence. He pointed out that for the same amount of money Boeri is spending to add “forest” to the sides of his buildings—about $4.25 million—one could restore more than 2,000 acres of actual forest, using the most conservative cost estimates. Though he didn’t want to be cynical about the idea, he just couldn’t see it working: “Who wouldn’t want to live in a city full of tree towers?” he wrote.” But I just can’t make a case for it. Plant physiology tells me that the trees, if they do survive, will require constant and costly maintenance throughout their short, brutal lives. Finance tells me that the money required to afforest a building would be more effectively used for restoration and preservation. And my gut tells me there are more equitable ways to give people trees, not just to those who can afford it.”

Among my friends, family members, and colleagues, I’m known as the guy who’s always trying to mediate disputes by somewhat meekly interjecting: “Actually, if you stop to think about it, both sides make a pretty good point.” Predictably, then, I’ve managed to land somewhere right in the middle of Krulwich’s The-Future-Is-Now optimism and DeChant’s It’s-Just-Not-Worth-It pessimism.

As an environmentalist and an unapologetic urbanist, I long ago reconciled my love of trees with my love of skyscrapers. And while it never really occurred to me before that they might actually go together in the way Boeri and others envision, that doesn’t automatically preclude this novel hybridization from joining the ranks of the world’s all-time greatest. Were it to succeed, Bosco Verticale could indeed be—like Brunelleschi’s dome—the template for a revolution in urban design. But DeChant’s points are all well taken, and none of them more so than his subtle indictment of Boeri and his many champions on charges of hubristically misplacing their conservation energies.

Even Tim DeChant concedes that he regards Boeri as a serious and well-intentioned architect who, while misguided, is to be commended for at least asking a provocative question that probably doesn’t get asked often enough. Namely: How can we weave more beautifying, spirit-nourishing, carbon-soaking greenery into our cities at the same time that we’re striving to densify them even further?

We’ll all find out soon enough. Boeri expects his towers, with their 96,000 square feet of tree-covered balcony space, to be move-in ready by the end of the year. The appropriate position to take at this point is: Let’s wait and see. And in a (modulated) spirit of Krulwichian optimism, let’s go ahead and wish Stefano Boeri all the best. If he’s successful, he may well join the ranks of his architectural ancestors as one of Italy’s great innovators, ushering in a new era of highly engineered urban forestry that will make city air cleaner and skyscraper views greener. And if he’s not, well, at least he’ll have taught us a valuable lesson.