Ka-ching we can believe in 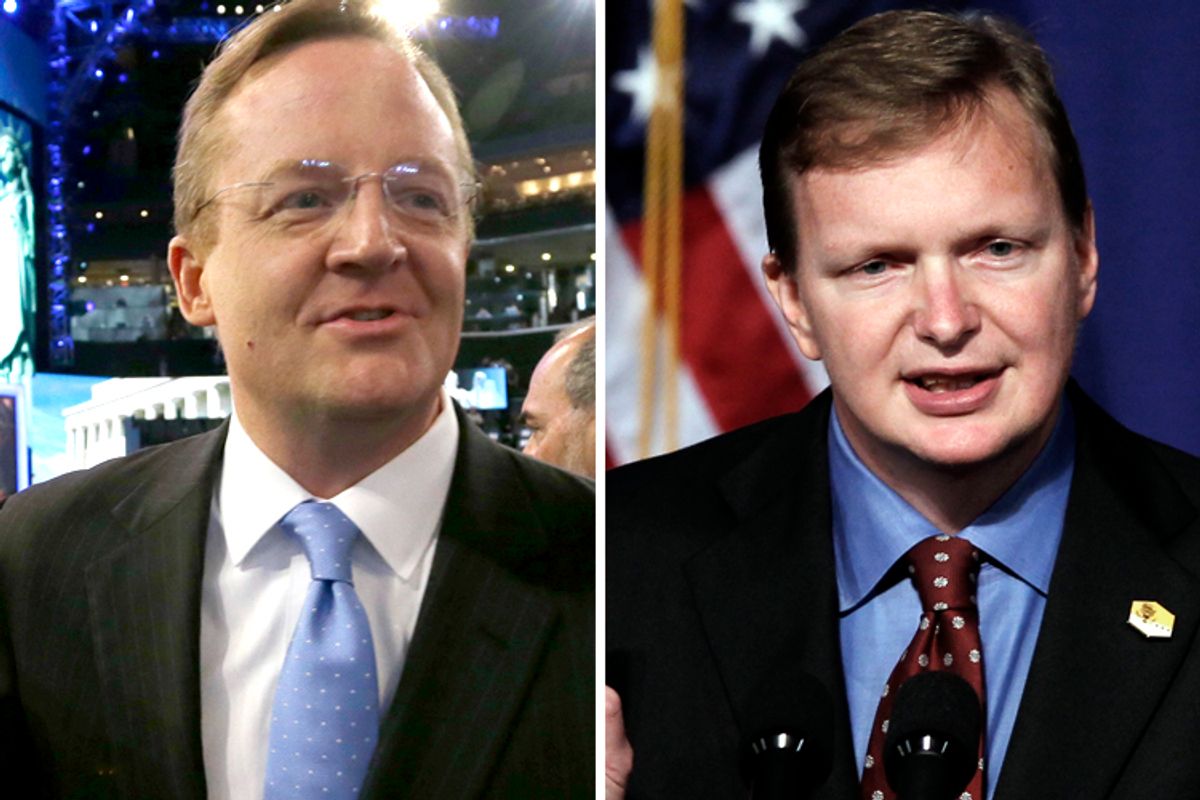 Forget its surreal Beltway gossip and sharp writing. The main reason to read Mark Leibovich’s “This Town” is to understand how many of our political leaders and their staffers reliably cash in after their time in government – including, despite airy rhetoric to the contrary, too many veterans of the Obama White House.

Leibovich already has ample material for his paperback postscript. Just this weekend came word that Obama 2012 campaign manager Jim Messina is working for the anti-immigrant, pro-austerity British Prime Minister David Cameron, and the communications firm of former White House Press Secretary Robert Gibbs and campaign flack Ben LaBolt now represents Big Pharma player Eli Lilly. Though Lilly was one of the medical-industrial complex members to support Obamacare, reportedly thanks to promises the bill wouldn’t use government power to lower prescription drug costs, its leaders have been railing against its implementation ever since.

“I have long admired Prime Minister Cameron. While I will not be moving to London, nor will I be managing any type of day-to-day political operations, I will be offering strategic campaign advice leading up to 2015,” Messina told Politico. He did not specifically say whether he has “long admired” Cameron’s harsh austerity policies and budget cuts, or his novel strategy of urging immigrants to self-deport, sending vans into their neighborhoods telling them to “go home.”

“WTF, Jim Messina?” counters Michael Tomasky of The Daily Beast. “How does a person go from running Barack Obama’s reelection campaign to working for David Cameron and the Tories?”

But Messina, Gibbs and LaBolt join an ever-lengthening list of Obama devotees who once declared themselves and their boss to be above Washington and determined to change its culture of corruption. They signed “no ego, no glory” pledges and believed, in the words of Gibbs himself, Robert Gibbs “This isn't about us. It's about something bigger.” Most Obama voters did not think he meant a bigger paycheck.

Gibbs, LeBolt and Messina may not even be the very worst administration sell outs. Leibovich documented the way “Obama bigwigs latch[ed] like newborns onto the teat of some of the administration’s biggest nemeses:” Treasury Department counselor Jake Siewert headed to Goldman Sachs; the Defense Department’s Geoff Morrell to British Petroleum after the Gulf spill; Office of Management and Budget director Peter Orszag to Citigroup. By 2010 once and future campaign manager David Plouffe was making $1.5 million a year consulting to General Electric and Boeing, making speeches and publishing “The Audacity to Win,” which might have a sequel: “The Audacity to Get Rich Thanks to Barack Obama."

Leibovich wasn’t the first to chart the path from the White House to big wealth:  Noam Scheiber’s “Get Rich or Deny Trying: How to Make Millions Off Obama” broke it down in April. Scheiber captured some of the big names and even got at some of the more obscure sell outs. Former Michelle Obama communications director Camille Johnston went to work for Siemens, and was given credit for the president lauding the firm in his State of the Union for partnering with community colleges.  Fundraiser extraordinaire Robert Wolf was joined by former Council of Economic Advisors chair Austan Goolsbee to create a financial consulting firm called 32 Advisors. As Wolf humbly told Schieber, “Listen, Austan and I, we were his economic advisers during the presidential campaign. The relationship [with Obama] goes way back. Obviously, we’re very friendly. We remain close friends.” He offers all this as prologue to stipulating that the White House would never lift a finger to help him. “The president has other things to do than worrying about 32 Advisors,” he allows.

Former White House communications director Anita Dunn has come in for lots of criticism – some of it from Gibbs, Axelrod and Plouffe – for leaving the administration to rejoin SKDKnickerbocker and representing corporate clients, including the junk-food industry opposed to some of Michelle Obama’s anti-obesity reforms. “In conversations with other Obamans,” Scheiber reported, “several were willing to damn former colleagues as ethically suspect. (Naturally, they downplayed their own transgressions.)”

It should be noted that Axelrod, Gibbs and Plouffe all joined the pundit class they once purported to disdain, the first two with MSNBC and Plouffe with Bloomberg. And in May, Gibbs, Messina and Plouffe headlined an energy conference in human-rights-challenged Azerbaijan joined by 40 other former White House officials. (Oh, and I almost missed this Bloomberg piece about the shocking Securities and Exchange Commission revolving door.)

To be sure, the Obama White House is neither the first, nor the worst, to send its veterans into the private sector to get rich. The Clinton White House blazed a trail for Democrats to follow (and its trans-partisan fixer Lanny Davis became the emblem of all that the Obama team vowed it would never become). Is it wrong to hold Obama veterans to a higher standard than other political staffers just because of their candidate and their campaign’s lofty rhetoric? TNR’s Alec MacGilles sees a little bit of hypocrisy in Beltway media skewering Obama vets for embracing their own Beltway culture, and he has a point.

But I’ve long been irked by Obama defenders essentially mocking people for believing the candidate’s 2008 hype. And I have no patience for their blaming Washington, either. As Gibbs told Leibovich about a dejected meeting of Obama staffers in 2010: "I remember saying in that meeting, 'Somehow we have all changed,'" Gibbs said. "Or maybe Washington just changed us."  That’s not exactly taking responsibility for your actions.

But why bother, when you’re unlikely to be punished for either selling out, or lying about why. Tomasky thinks Messina’s Tory phase should disqualify him from representing anti-austerity, pro-immigration reform candidates. “The Tories aren’t the Texas Republican Party. But they are the other side. I hope the Democrats who consider hiring him in 2016 understand that.” They should also understand that behavior like the Obama team's Get Rich Quick caucus just feeds Americans' cynicism about politics and especially the belief that both Democrats and Republicans work hardest to serve the wealthy.