The Grey Lady calls "coziness with the moneyed class" an "asset," in an editorial supporting Cory Booker. Seriously 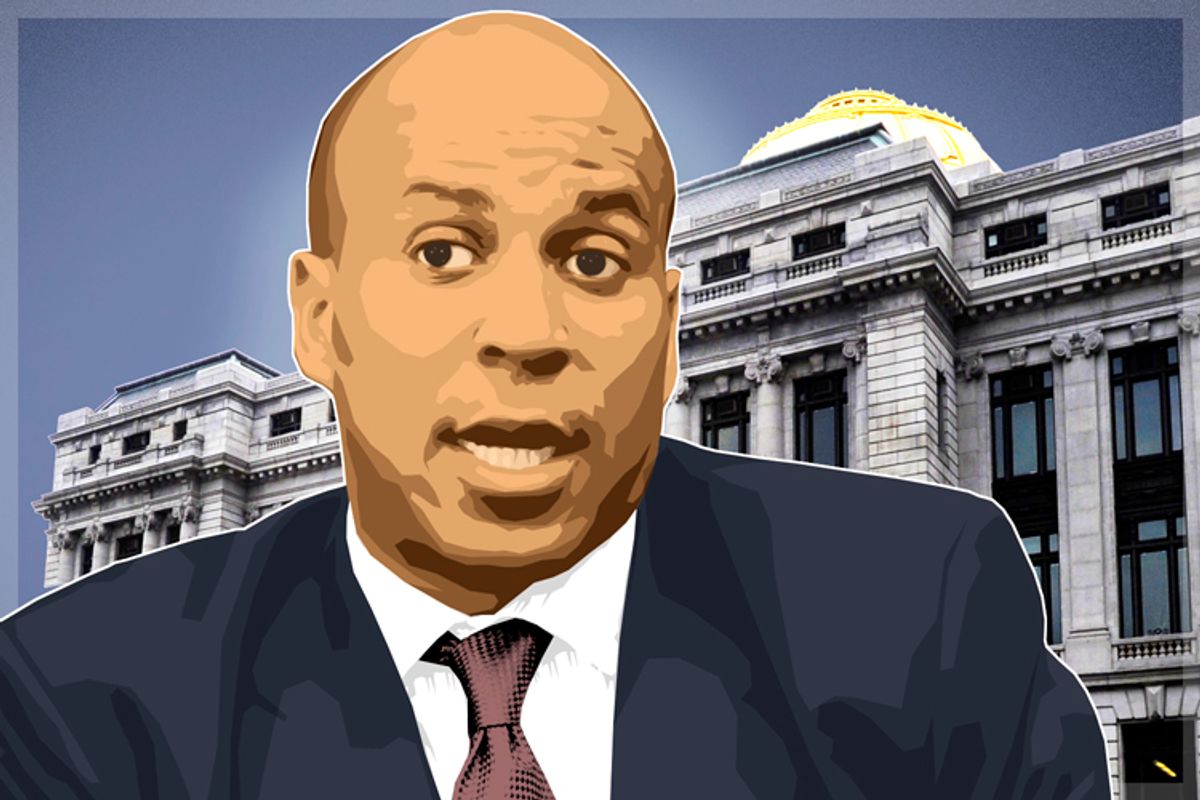 If you happened to have read the New York Times' opinion section this weekend, you may have noticed you were told that the U.S. Senate - the body comprised primarily of millionaires - apparently needs more lawmakers who are very close to the wealthy.

Yes, despite every member of the upper house raising huge amounts of campaign money primarily from the American aristocracy, and despite the fact that legalized bribery results in votes that consistently defend the aristocracy's economic interests at the expense of everyone else -- the grey lady's editorial board implored voters to see Senate candidates' all-too-close relationship with America's uber-rich not as something suspicious or repugnant, but as something commendable and worthy of reward.

This was the powerful message in the Times' house editorial this weekend endorsing Newark Mayor Cory Booker's candidacy in New Jersey's upcoming special U.S. Senate election. Citing Booker's success engineering a $100 million donation to Newark schools from Facebook's Mark Zuckerberg (but conveniently not mentioning the ugly controversies surrounding the donation), the newspaper concluded its endorsement with a slap at Booker's opponents - one that in a single sentence revealed everything you need to know about the elite media's royalism (emphasis added):

Some of Mr. Booker’s opponents are trying to denigrate those assets — his fame, his ability to work with Republicans, his coziness with the moneyed class.

You read that correctly: According to the Times, being "cozy with the moneyed class" should be seen by voters as an "asset" for an aspiring senator - one the Times insinuates shouldn't dare be "denigrated" by other candidates.

Of course, the Times is fairly accurate in declaring Booker as "cozy with the moneyed class." If anything, in fact, it's an understatement - Booker is one of Corporate America's most loyal and obedient Democratic politicians.

As the Republic Report and ThinkProgress both document, Booker's entire political career has been bankrolled by Wall Street. According to The Record newspaper, that includes his current U.S. Senate race, in which Booker "is tapping high-tech billionaires (and) Wall Street hedge-fund managers" to finance his campaign. Additionally, Booker has done something most politicians are too embarrassed to do because it is so blatantly unethical: whereas most politicians wait to retire before personally cashing in on their government service, Booker has personally pocketed massive speaking fees from corporations and interest groups while simultaneously holding a full-time public office.

This kind of financial investment in Booker would no doubt result in big legislative returns for the rich and corporations if he becomes a senator -- just as those investments have already resulted in big returns for the "moneyed class" with Booker as prominent municipal politician.

For example, while raking in all this corporate money, Booker has been a driving force behind the national effort to privatize public schools -- an effort that is making huge money for education profiteers. He also seemed to consider endorsing corporate-backed cuts to Social Security -- until he was recently humiliated into backing down. But most notably of all, Booker used his political fame to publicly attack the Democratic Party's rhetorical criticism of Wall Street in the middle of the 2012 election.

“It’s nauseating to the American public,” Booker thundered during an appearance on NBC's Meet the Press. “Enough is enough. Stop attacking private equity."

He then added that "from a very personal level I’m not about to sit here and indict private equity (because) they’ve done a lot to support businesses [and] to grow businesses."

Booker's statements -- which omitted private equity's increasingly problematic record -- generated nationwide headlines and dominated the news cycle for days. It was the kind of publicity that the aristocracy could only dream of -- or simply buy outright. In fact, as my Salon colleague Steve Kornacki noted at the time, the latter is probably exactly what Booker's televised defense of Wall Street was all about. Booker had long before been bought, and he was most likely paying the investment back so as to guarantee even more corporate money for himself in the future.

Considering all that, you might expect an allegedly liberal editorial board in this Citizens United era to issue a scathing editorial denouncing Booker and endorsing one of his opponents with a more virtuous record. The fact that the opposite happened this weekend at one of the world's largest newspapers exposes a taboo truth: namely, that regardless of stated ideology on hot-button issues, the establishment press across the ideological spectrum almost universally accepts and/or lauds -- rather than questions -- the corrosive influence of money in politics. Indeed, even the ostensibly liberal New York Times editorial board doesn't view Booker's unseemly relationship with the "moneyed class" as any kind of liability - it openly views it and praises it as a cherished "asset."

Now, sure, Booker's version of pay-to-play corruption is old news, as is the elite media's typical deference to politicians who most steadfastly embody such legalized corruption. However, that deference usually expresses itself as positive puff pieces, softball questions and generally slanted coverage -- and it is almost never just declared in crystal clear language.

That's what makes the Times' house editorial so important and such a critical historical marker in this new Gilded Age: beyond its endorsement of a particular corporatist candidate, it provides a rare example of the establishment press admitting to its plutocratic worldview.

In that worldview, voters are not supposed to see politicians' loyalty to corporations and the wealthy as the root of so many of the nation's problems. Instead, we are supposed to see a politician's unity with the "moneyed class" as an altogether desirable "asset" -- no matter how much that so-called "asset" harms the country.