Star Wars toys made me who I am

In praise of action figures from a long time ago (1978) 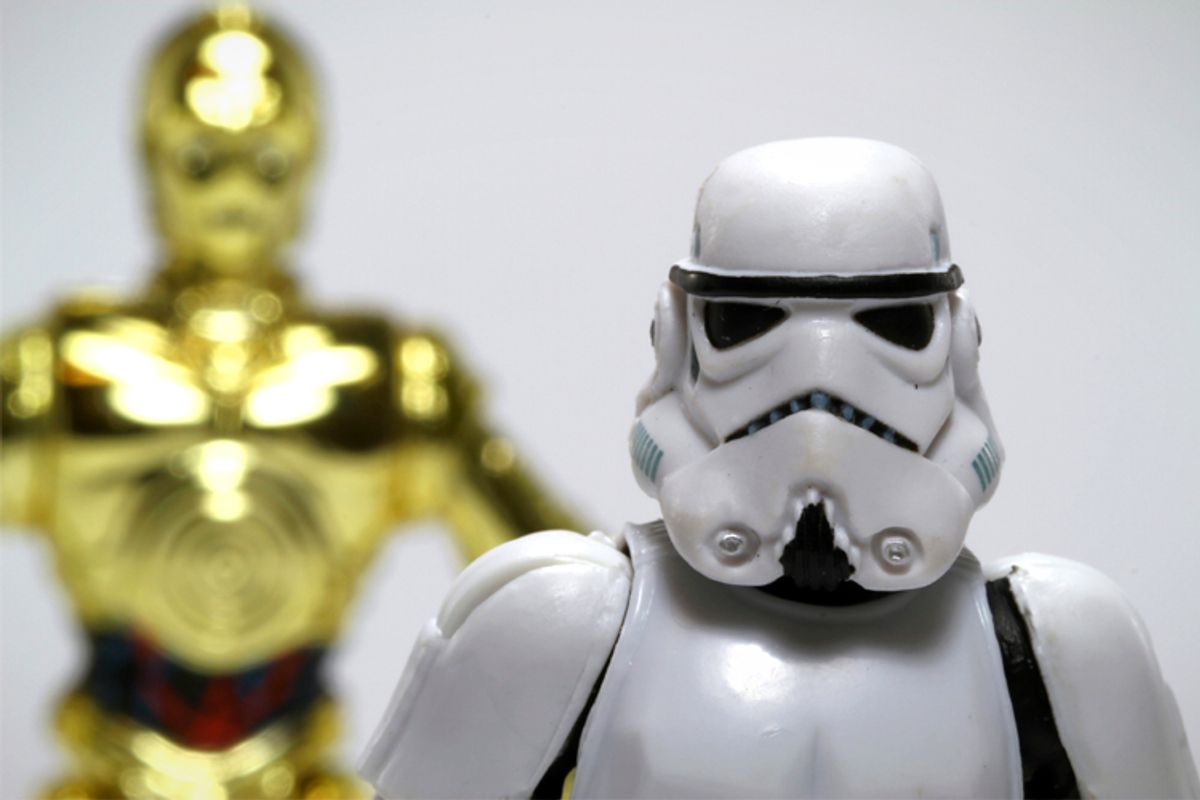 In the dark, dark days before there were video games, you may recall, we played with toys instead. The best toys for children are, of course, sticks, rocks and dirt. Playing with these — damming a creek or making a slingshot, brewing up a batch of slug soup — is how we learn spatial relations, hand-eye coordination and basic problem-solving skills. But you try giving your nephew some mud for his birthday. However lovingly moistened, I promise you it won’t go over well. Kids want toys, damn it, and who can blame them? It’s in their nature and, yeah, they’re being marketed to nonstop with corporate propaganda.

Unless you keep your children in a box, which I do not recommend in most cases, they are going to be subjected to enough commercial messages every day to stagger their developing imaginations. The job, then, of a parent or guardian is to seek a balance. To find toys and activities that placate the crass commercial urges they can’t yet control and also stimulate the brain’s innate need for interactive immersion into storytelling.

Stephen J. Sansweet’s beautiful and exhaustive "Star Wars: The Ultimate Action Figure Collection" is a 352-page coffee table book dedicated to cataloging in alphabetical order the 2,300 (official) Star Wars action figures produced since 1978, from the medical droid 2-1B to the bounty hunter Zuckuss. In his introduction, Sansweet notes, “With home video still half a decade away, Star Wars toys became a way for children to bring home a piece of the fantasy and experience it over and over in their imaginations.”

Action figures provide all the interactivity of video games without the eyestrain -- but with much of the freeform imaginary wonder of sticks and rocks. I would contend that the Star Wars toys many of us used to play with, and now which every subsequent generation will get to play with thanks to the Walt Disney Co., open up remarkable new avenues of creativity for children.

The first Star Wars figures, manufactured by Kenner, were sold in a mail-order “Early Bird” certificate package. The day mine arrived was the day my writing life began. Instead of just reading stories or watching them every so often at the movies, I could make them up using the archetypes embodied by those first four toys: adventurer, princess, helper companion, and Wookiee. I wish I still owned them. I was recently eyeing an Early Bird Certificate Package on eBay. It was selling for more money than I’ll make this month and maybe next. Any wealthy admirer of this essay is strongly encouraged to purchase one and mail it to me.

“When the first twelve carded figures started shipping in the spring of 1978, selling for as little as $1.97 each,” Sansweet writes, “it was difficult to keep up with the demand.” Some of those early Star Wars figures now sell for thousands of dollars. Alternatively, the sixty-five dollars that you might spend on a share of Disney stock could instead get you five Kenner Vintage Collection figures made to look like the original toys from the seventies or, if you prefer, a MOC unpunched 77-back Pruneface from "Episode VI: Return of the Jedi."

From my writing desk at this moment, I can see some of my own, small collection: Hammerhead, Yak Face, a Jawa, Darth Malgus (an “Expanded Universe” character who has appeared in books and a video game, but not to date a film), and Bossk astride a vintage 1978 Dewback riding mount. I also have a few toys not pictured in Sansweet’s amazing book: some bootlegs I picked up in Budapest in the 1990s. They’re poorly modeled and hastily painted, but it turns out there’s also a collectors’ market for illegally produced Star Wars toys. A man named Gus Lopez maintains a massive Star Wars Collectors Archive online and it features an entire page dedicated to bootlegs.

As Sansweet writes, “By the time the last of what we now call ‘vintage’ Kenner figures worked their way through stores worldwide in 1985, about a quarter of a billion of them had been sold.” In her book "Glittering Images," the theorist Camille Paglia points out that the enormous success of those toys — the official, licensed ones, I mean — is in part why many art historians have not yet fully embraced "Star Wars." “[George] Lucas’s massive product licensing and merchandising tie-in, which he presciently negotiated with studio executives who saw little future in them, made him a billionaire,” she writes, “but his phenomenal success as a shrewd businessman has certainly slowed his recognition as a major artist.”

That is the art world’s loss. The extent to which those toys opened up so many young imaginations is the same extent to which Lucas remains unappreciated by so many of the self-styled gatekeepers of Art. Those of us who know better appreciate that the Star Wars universe constitutes one of the indelible mythic creations of our time, and some of us even have the toys to prove it.

Andrew Ervin is the author of a collection of novellas, Extraordinary Renditions. He reviews books for the New York Times Book Review, Philadelphia Inquirer, San Francisco Chronicle, but what he really wants to do is write a Star Wars book.