"The Newsroom": Maggie's crisis in Uganda and Will hates Occupy

In the season's fourth episode, Maggie spills about her experiences in Africa, and Jim screws up yet again 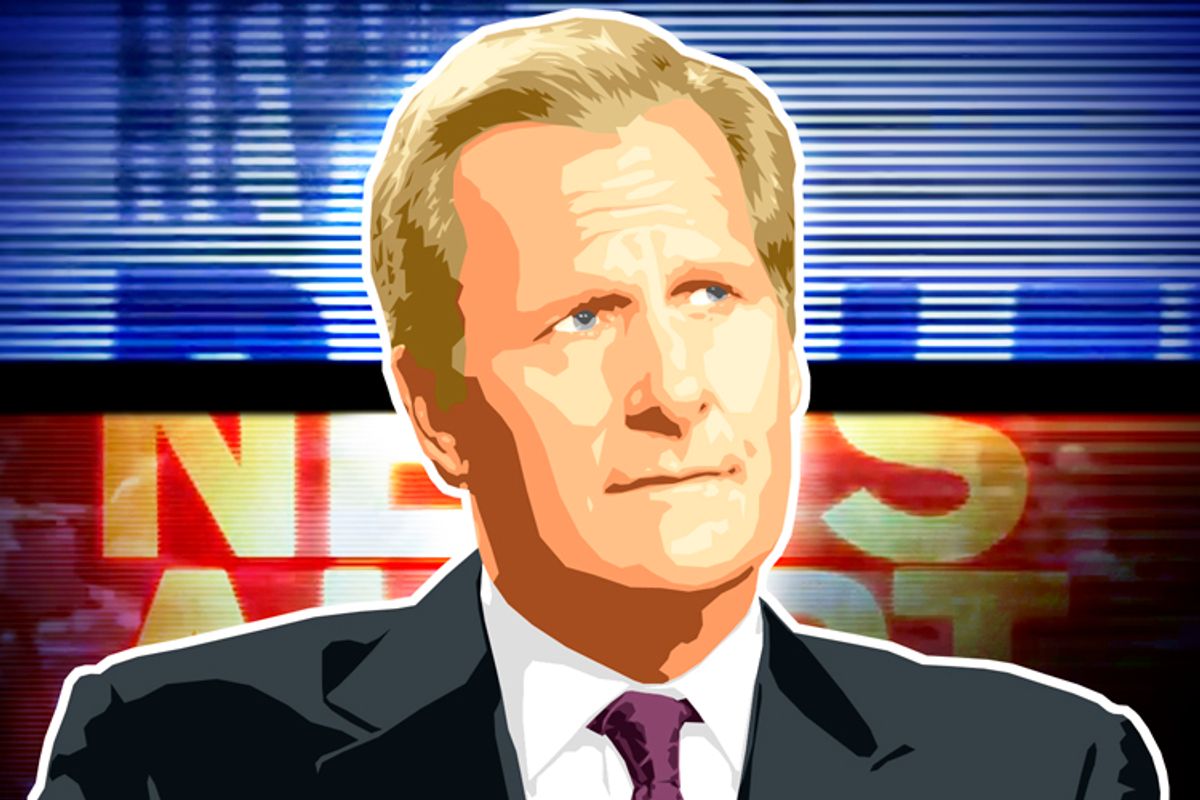 The biggest problem with "The Newsroom" -- and one that it seems could be fixed fairly easy -- is an entirely nebulous idea of what "News Night" is. I've said this before in this space, but the show alternates between being a "60 Minutes"-style showcase for investigative journalism and a straight commentary show. While it's, yes, intended as an idealized version of cable news, a show that shifted so swiftly between generic distinctions would have no real audience, let alone the "1.5 million" cited in this episode.

With that in mind, this episode at once features Maggie speaking to a lawyer about her traumatic experiences in Uganda seeking access for a story about Joseph Kony (#throwbackthursday) and Will excoriating Occupy Wall Street on-air for being an ineffective means of delivering change.

Second things first; though Marcia Gay Harden's portrayal of a lawyer investigating what really happened on Maggie's trip to Africa is something of the throughline of the season, having been a consistent element since the season premiere, Will's treatment of an Occupy Wall Street representative is much more representative of the show's particular quality.

The OWS representative Neal met has agreed to an on-air interview with Will, but Will has his mind made up as to how he's going to treat her before she steps onto the set, it seems. He messes with her, first, by seeming to address her as he speaks to a producer over his microphone; within moments of the interview beginning, it's clear Will is playing some sort of game. He refers to her as "one of the leaders" of Occupy Wall Street, because one of the classic moves great journalists do is to purposefully and knowingly misrepresent their interview subjects on-air. Probably they do, some of them! But isn't Will supposed to be dedicated to the truth in all its particulars?

No matter -- he gets at a different sort of truth, the kind only a Great Man can provide, when he just hectors the OWS rep, Shelly, for the entirety of the interview. When Shelly says that she is not among the leaders of OWS, a leaderless movement, every subsequent question follows the model "Isn't it true that TK GREAT MAN OPINION HERE?" He also says he's paid "exactly what the market will bear" and that she is not taking Occupy Wall Street seriously. Anyway, she walks out and Neal tells her she didn't do that poorly and demands a favor from her, to direct him to the man at Zuccotti Park who knows about U.S. chemical warfare in Pakistan for another story. She punches him in the stomach. Even if you're satisfied with Will's treatment of Shelly as a means of getting at the truth, you'd think that the multifarious, news-and-so-much-opinion "News Night" would have figured out some sort of "beat-sweetening" mechanism by now to prevent this sort of thing from happening? Generally sources aren't super-forthcoming after you tell the nation in detail why you believe they are idiots.

Either way, Will visits her by interrupting the college class she teaches (after a meeting between Shelly and Sloane, who agrees to go because she was inspired by "Titanic" or some damn thing, falls through) and says he's having "a crisis of confidence" and she kind of softens up. It would seem, based on what we know lies ahead and Shelly's general understanding mien, that we move closer, ever closer, to what would appear to be misreporting of an international crisis.

On that international tip, Maggie is recounting the story of how she melted down to the alternately grim and jovial Marcia Gay Harden, who -- compliment for "The Newsroom" alert! -- is giving a great performance, and indeed the best on the show by far. In short, by Maggie's telling, she went to Africa to shoot B-roll footage of U.S. troops building an orphanage in exchange for access to a base from which she could report on Kony even before #Kony2012. Her presence, along with that of the local fixer, alerted local plunderers who shot, in particular, a young child who'd bonded with Maggie; she interprets his death as her fault broadly and specifically (the bullet, she thinks, was intended for her). Because he loved her blonde hair, she cut it off and died the remainder red (and here I thought she was just a Bowie fan). She has been diagnosed powerful antidepressants but isn't taking them. She's fine! She's fine. This plotline isn't really impeachable, though so far it has little to do with anything -- it feels like the fairly clear result of a directive to make the show more accessible. And it worked; leaving aside the fetid air of colonialism that suffuses the image of a white woman being deeply touched while reading to an African child, I really was interested enough!

Finally, Jim is continuing to be a mess on the campaign trail; he presumes that he and the two compatriots he got to jump off the Romney bus with him will continue to make their own access to everything from speeches in advance to hotel accommodations (turns out the campaign won't book you a room if you've told them where they can stuff it!). It's fortunate that the press aide turns out to be a woman literally made of straw, who rants about how much she hates the press and then curses Jim out -- she offers him a favor to get that taken off the record.

The favor is granted -- Jim asks for "thirty minutes with the candidate" for Meryl Streep's daughter, whose boss told her on speakerphone (??) that "unless you're willing to put on heels and fuck me for an hour, you need to stop being a little bitch." Objection noted! Though, as anchor, Will's focus on the 2011 campaign has been limited to shibboleths about why the name of Rick Perry's ranch is not a big deal, MacKenzie thinks something of value has been lost, and pulls Jim off the campaign. Meryl Streep's daughter kisses Will and says something about how she went to Vassar. Fun fact: the actress and her mother both attended college in Poughkeepsie, N.Y.

So, it's back to New York for Jim. But it's hard to imagine this is any sort of career setback. Though he missed out on the Romney exclusive interview, he'll be able to book some masochistic Republican operative before the month is out, and Will can yell at them. Isn't that more the sort of show "News Night" is?