Rush: How I learned to forgive -- and even like -- the most hated band of all time

They're the most hated band ever. Yes, classic rock radio played them to death in the '80s, but it's time to let go 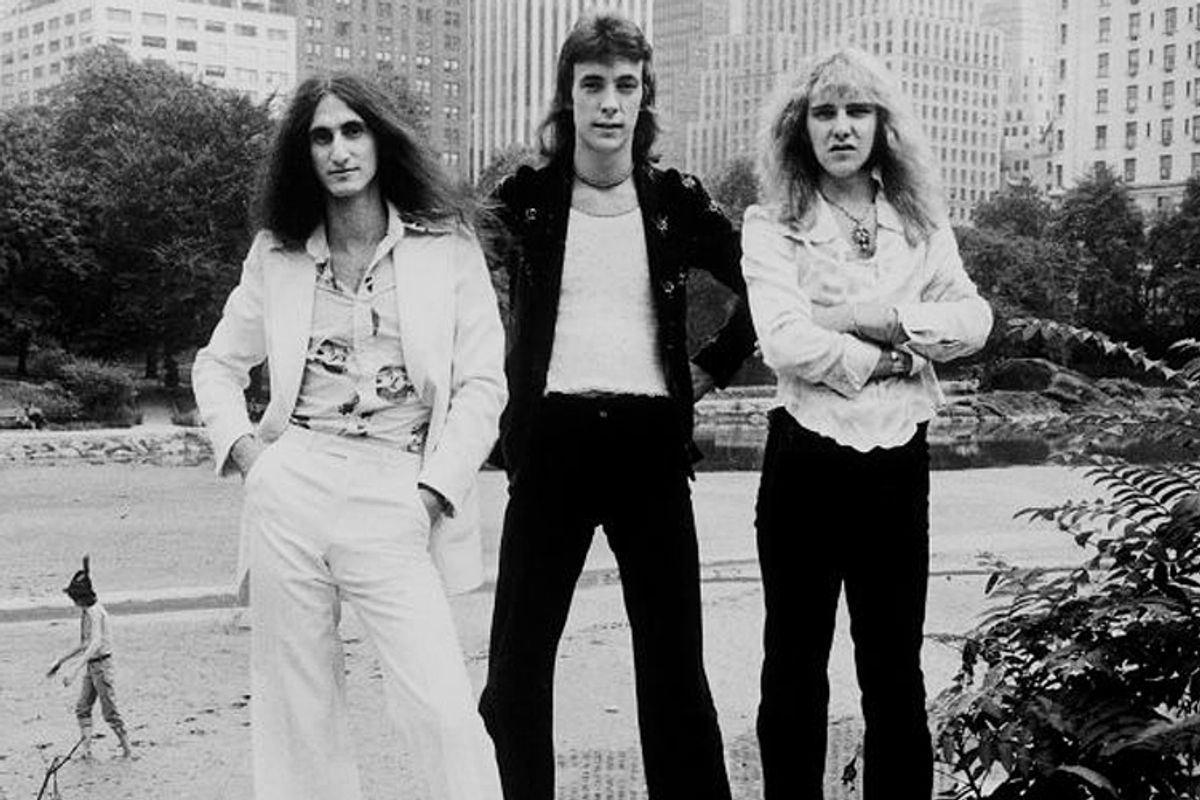 Excerpted from "Turn Around Bright Eyes: The Rituals of Love and Karaoke"

It was a woman who introduced me to Rush: Miss Blake, my sixth-grade music teacher at Pierce Elementary School. The seventies, obviously. A typical 1978 suburban public school scenario—we studied "2112" in music class, while in English, we spent the whole year studying "Lord of the Rings." Our teacher believed that spending the golden hours of our childhood frolicking through the Shire with orcs and hobbits would make us peace-loving members of an agrarian future society. Instead, it gave me a lifelong grudge against wizards.

Miss Blake always seemed so mild-mannered, with her corduroy smocks and beaded necklaces and straight black hair. I never thought of her (or any teacher) as a rock & roller. She usually brought in classical records. But one week, she happened to ask, “Has anyone heard of a band called Rush?”

To my surprise, I was the only kid who raised a hand, and even then I’d never heard their actual music: I’d seen the newspaper ad for their latest album, "A Farewell to Kings." I was intrigued by how dangerous the band members looked on the album cover, which probably gives an idea of how dangerous I was. The name Rush was also associated with a drug the older kids smuggled into school—bottles of amyl nitrate with a lightning bolt and the word rush on the label. So I assumed their music was scary older-dude stuff, full of drugs and the occult.

We spent all afternoon listening as Miss Blake taught us to appreciate the “rock opera” format by playing us "2112." These songs had a plot, about a future society where music is banned and Geddy Lee defies the elders by learning to play guitar. His squeak-of-the-damned voice made the whole class giggle, as Miss Blake talked us through the libretto and explained the symbolism in “Temples of Syrinx.”

I heard tons of Rush in my college dorm, because we all listened to the local rock station WPLR, which apparently stood for “Plays Lotsa Rush.” My Rush friend (every North American male has a “Rush friend”) was Arun, now a neurosurgeon. He explained (Rush fans love explaining things) how the drummer Neil Peart wrote the lyrics, even though bassist Geddy Lee was the one who sang them. Arun could elaborate the Rush philosophy, with the individual’s struggle to choose free will in a conform-or-be-cast-out world. Over the years he has kept me up to date on how Rush have revised their philosophy, as their ideas keep changing in response to a world where changes aren’t permanent, but change is.

I was officially opposed to Rush at the time, so I enjoyed goading him about the band’s flaws. In all these friendly arguments, I developed a real affection for the band, as well as an admiration for their devotees, so I guess I was a casual fan. But casual Rush fans do not really count in the grand scheme of things. Real Rush fans are the hard-core believers, one of the most doggedly loyal audiences in the business. And then there are the people who hate Rush just as passionately, who for lack of a better collective noun we can call “the rest of the world.” The singular thing about Rush isn’t how beloved they are. It’s how hated they are.

Are Rush the most hated band of all time? The answer is simple: yes. (Not the band Yes, although they’re in the top twenty.) Rush are easily, beyond any rational dispute, the most intensely despised rock band who ever existed. Women famously hate Rush, but most men have hated them just a little less fervently. In a way, that hatred is as impressive as the loyalty of their fans. Hating Rush was a blast. These days I like Rush a lot, but I miss hating them. We will never agree on anything the way we agreed on Rush.

Rush are not so hated these days, because of "Beyond the Lighted Stage," which has to be one of the best rockumentaries ever made. The band members are extremely lovable in this film—lifelong friends who never argue about anything except the keyboard solos. (Apparently certain members of Rush are the only people on earth who think Rush should have keyboard solos.)

They’re also up front about their lack of appeal to any female audience. Even when they pack a stadium full of fans, the clitoris count will be in single digits. The only person in the movie who mentions sex is Gene Simmons. He tells stories about the seventies, when everybody else was chasing groupies (“you could even be an ugly bastard like me and get laid!”) while the Rush guys went back to the hotel to read books.

So how did these huggable schlubs get so widely detested?

Blame it on the radio. In a saner world, Rush would have stayed a cult band; they could have kept stoking their quirks for their sizable cult audience, while normal people just ignored them. That’s what King Crimson did; it’s what Gentle Giant did. It’s what all the other bands like Rush did. But it was not possible for normal people to ignore Rush, because the radio was shoving them down people’s throats.

For reasons that remain murky, they got constant airplay, way out of proportion to their actual record sales. The details of how this happened are lost in the history of glittering prizes and endless compromises, but somehow, Rush snagged some kind of sweetheart deal where they became one of corporate rock radio’s flagship bands. So they got hyped on the airwaves on the same level as Journey or Styx or Genesis, bands that were much more popular and went down much smoother. And that created massive resentment among people who were not full-time Rush fans. There was a sense that Rush were getting forced on innocent bystanders.

At one point in the movie, Billy Corgan asks, “Why was this band marginalized?” That absurd question can only mean the guy never heard any rock radio back then. Anyone who was stuck in the suburbs can tell you it was impossible to get through an hour without getting strafed with “Tom Sawyer” or “Limelight” or “The Spirit of Radio.”

All this overexposure was out of whack not just in terms of their actual popularity, but also in terms of their potential popularity. For better or worse, these guys weren’t crowd-pleasers— they didn’t fade into the background. Rush provoked a strong reaction, which is why they generated such ill will. It wasn’t Rush’s fault. All these guys wanted to do was keep making cult music for their cult audience. But Rush came to symbolize everything oppressive about corporate radio.

Rush fans are admirably protective of their heroes and resent everything written or said about them. Despite all the cushy treatment the band got from broadcast media, Rush fans still feel picked on by the rest of the world. I hope (and assume) they will never give that up. Rush fans thrive on that sense of deprivation. It’s like how Christians love the Jesus-fish symbol, so evocative of how early Christians were persecuted by the Roman Empire, despite the fact that Christianity has been running shit since the Roman Empire made it the official religion of the world in A.D. 312. Christians would rather feel oppressed than oppressive; that’s why they decorate their cars with stickers that say “my boss is a Jewish carpenter” instead of “my boss is the Emperor Constantine,” and that’s why they like Jesus fish better than in hoc signo vinces decals. Can you blame them?

But these days, nobody gets forced to hear Rush against their will, so there’s no reason for anyone to resent the music. This changes everything. We are on our way to a world full of people who kinda-sorta like Rush, which might be the most tragic possible fate that could befall this band. When nobody hates Rush anymore, and it’s sad to think the day could ever come, they will be undeniably less Rush-like than they were before.

One of the weird thing about being a lifelong music fan is how you find yourself starting to enjoy music that used to feel oppressive. My Rolling Stone colleague Alexis Sottile has brilliantly dubbed this “Rockholm Syndrome.” After years of being held hostage by classic rock radio, you catch yourself drumming on the steering wheel and saying, “Hell yeah, Lynyrd Skynyrd,” or “Wow, you’re right—all in all, it is just another brick in the wall! Thanks, the radio!”

It’s a post-adolescent phase most of us reach, after we get mature enough not to depend on music for all our self-validation. Your fandom gets less dogmatic, as you forgive the bands you used to hate. You might grow up resenting classic rock as The Man. But then you come down with a case of Rockholm Syndrome, and now when you hear “Melissa” in the car, you don’t jam your middle finger into the preset buttons. Instead, you think, “Whoa, Gregg Allman. You catch a free ride on a freight train, then you complain each car looks the same? You are so demanding! How does Sweet Melissa put up with you?”

In its advanced stages, this can get ugly. For me, it means the shaggy hippie-burnout rock that I inexplicably began loving around the time I hit thirty-three and started buying Moby Grape and Quicksilver Messenger Service records. After years of anti-Grateful Dead hostility, I began musing about how the Europe ’72 lineup was superior to the two-drummer setup of Blues for Allah or Wake of the Flood. My teenage self would be horrified to learn I spend as much time listening to Jefferson Airplane as I do listening to the Jesus and Mary Chain.

But who ever thought it would happen with Rush? Not me. Ten years ago, I was in Toronto covering a music festival to benefit the city after the SARS epidemic. The big names at SARS-Stock were the Rolling Stones, AC/DC, and Justin Timberlake, but there was no question who the heroes of the day were. There was an unbelievable surge in the crowd when Rush hit the stage, their first local appearance in years, and they began with “YYZ,” their instrumental tribute to their hometown. (It’s Toronto’s airport code.)

I was out in Downsview Park, amid half a million Canadians standing in a field, everybody playing air telegraph to the main riff, which Arun had explained to me years ago was Morse code for the letters YYZ. (He also explained why it was pronounced “Y Y Zed.”) I never expected to feel so much joy in Rush’s presence. For that matter, I never expected to see so many Canadians feeling such raw emotion.

“The Spirit of Radio” is in the karaoke book at Sing Sing, and it has gone from a once-a-year comedy pick to a regular staple. Everyone sings along, which wasn’t the case a few years ago, and the openhearted pro-music sentiment of the lyric really comes across with multiple voices. (Also, it has the same guitar riff as Lou Reed’s “Sweet Jane,” plus the same lyrics as the Pet Shop Boys’ “It’s Alright.” Never noticed before.) The modern machinery of the karaoke room brings out something undeniably personal in the song: emotional feedback on a timeless wavelength.

Excerpted from "Turn Around Bright Eyes: The Rituals of Love and Karaoke" by Rob Sheffield. Published by It Books, a division of HarperCollins Publishers. Copyright 2013 by Rob Sheffield. Reprinted with permission of the author and publisher. All rights reserved.