Wisconsin Republican becomes unlikely champion of voting rights, stepping up to his own party's shameful leadership 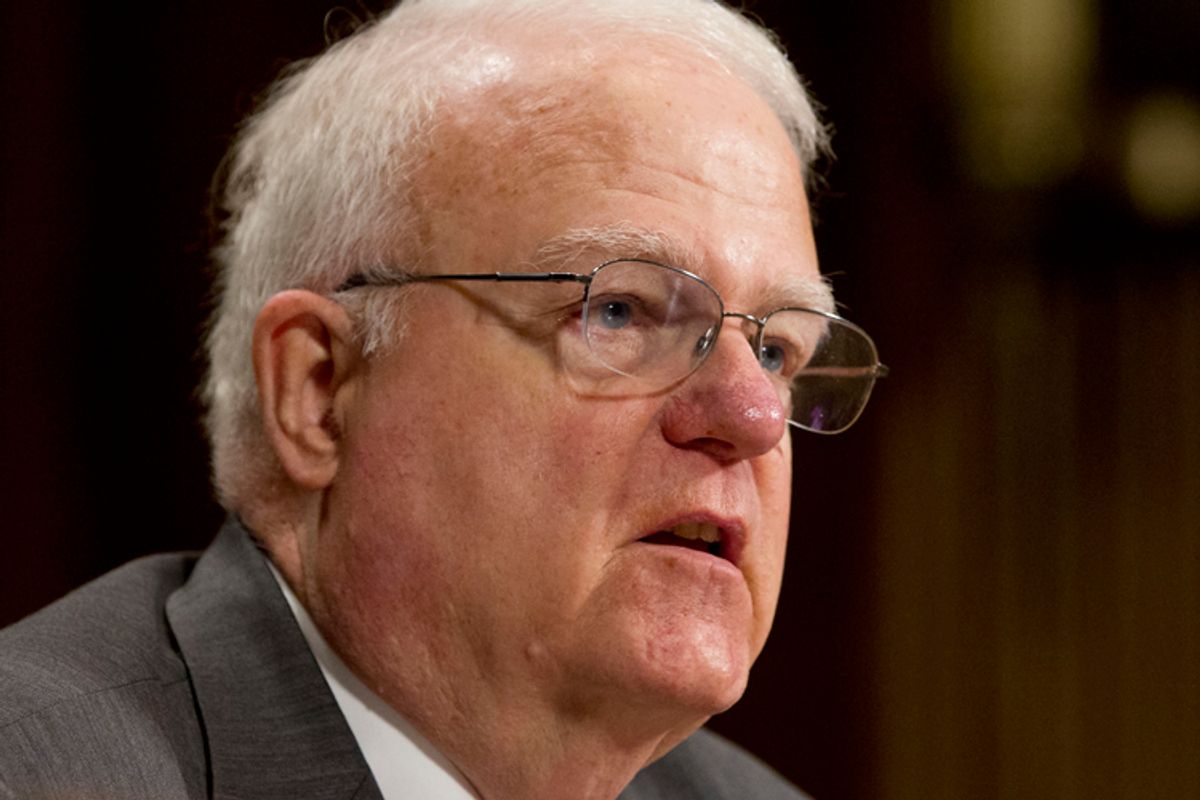 Full disclosure: We have not been shy in calling out Rep. James Sensenbrenner, R-Wis., for some fairly outrageous stuff over the years.

Who can forget, for example, the time when, as chairman of the U.S. House Judiciary Committee in 2005, he shut down the microphones and lights in the middle of an oversight hearing on the Patriot Act when he did not approve of the testimony offered by witnesses called by Democrats?

It was outrageous, it was inappropriate, and we reported it as such at the time, just as we did in 2011 when, in a bit of déjà vu, he similarly shut down a town hall event in Wisconsin after protesters there expressed outrage over the Republicans' radical anti-union law recently adopted in the state.

So it is with much sincerity and great appreciation that we "call him out" today, not for outrageous behavior, but for his outspoken and unwavering support for the Voting Rights Act of 1965, after the very heart of that landmark civil rights legislation has been violently carved out by a 5-to-4 U.S. Supreme Court ruling in June.

Sensenbrenner presided over the U.S. House Judiciary Committee during many months of hearings and testimony concerning the continuing necessity of the VRA back in 2006, during which he explained prior to the Supreme Court's recent decision, "There was a lot of invidious discrimination shown."

He described those hearings as "one of the most extensive considerations of any piece of legislation that the United States Congress has dealt with in the twenty-seven and a half years that I have [served]."

After the 2006 deliberations, the Act was re-authorized for another 25 years by an extraordinarily lopsided bipartisan vote in Congress. The measure was approved 98-to-0 in the U.S. Senate and 390-to-33 in the U.S. House -- numbers usually reserved for little more than unanimous consent namings of post offices and such.

But if there is any legislation around that wildly discordant political sides should come together, it is for the Voting Rights Act of 1965 -- as the House, Senate and even the George W. Bush White House did, to their great credit, in 2006 -- in order to reaffirm that equal access for all to the voting booth represents the very lifeblood of our representative democracy and the most central core constitutional value of this nation.

"The right to vote," as Ronald Reagan described it when reauthorizing the VRA in 1982, "is the crown jewel of American liberties." He described the legislation as "prov[ing] our unbending commitment to voting rights."

In a laudable Op-Ed last week, Sensenbrenner once again spoke out loudly to reaffirm his own "unbending commitment to voting rights"; to call on Congress to fix the legislation that SCOTUS outrageously broke; and to state unequivocally that "the right of every legal voter to cast their ballot must be unassailable."

In his Op-Ed, Sensenbrenner describes the VRA as legislation that "began a healing process that ameliorated decades of discrimination and is vital to our commitment to never again permit racial prejudices in our electoral process." The key word there is "began." It did not end the discrimination, as the Supreme Court majority wrongly suggested -- a fact that has become incredibly apparent in just the few short weeks since their ruling.

Sensenbrenner explains that "Prior to the 2006 reauthorization, the Judiciary Committees held multiple hearings examining the VRA. Congress amassed a legislative record of over 15,000 pages, documenting invidious discrimination and demonstrating 'the continued need for federal oversight.'"

The need for the VRA's most central protections was once again made crystal clear when, just hours after the June SCOTUS ruling, Texas and other Republican-controlled states, mostly in the old South, declared their intention to immediately institute disenfranchising polling place Photo ID restriction laws which had previously been found to be wildly discriminatory under the Voting Rights Act both by the U.S. Department of Justice and by a three-judge federal district court panel as recently as last year.

Had there been any question about the intentions of those actions by states previously covered by the VRA's pre-clearance requirements, the radical Republican North Carolina state Legislature blew them all apart late last month when it passed, in just days time, the most extreme set of restrictions to affect minority voters since the Jim Crow era.

After SCOTUS overturned the VRA's Section 4 formula for determining which jurisdictions with long histories of racial discrimination at the ballot box would be covered by the Act's absolutely crucial Section 5 requirement for federal pre-clearance before enacting new election-related laws, Republican Senate Minority Leader Mitch McConnell was asked about whether he would support a legislative fix to the damage that had been done by the Court.

McConnell demurred, shamefully stammering and stuttering in reply that he had yet to read the Supreme Court decision, but that Congress would need to determine if the protection for voters in states with a history of Jim Crow discrimination was still necessary decades after the law had originally been adopted.

"Obviously, it's an important bill that passed back in the '60s, at a time when we had a very different America than we have today," McConnell said, before misleadingly reiterating: "I would say America is very different today than what it was in the 1960s."

But the question is not whether the nation is different, as McConnell mischaracterized it, from "what it was in the 1960s." The question is whether the nation is different from what it was in 2006, just seven years ago, when McConnell joined both his own party and Democrats in the unanimous 98-to-0 vote for the VRA's 25-year reauthorization. It was a rare moment of bipartisan unity and support for both democracy and the Constitution -- which tasks Congress to enforce the 15th Amendment barring racial discrimination at the voting both -- and, for one short moment, it was one in which Congress actually did its job and did it well.

In his Op-Ed, Sensenbrenner points out that the Supreme Court's "ruling suffers from one glaring oversight: it fails to account for the bailout procedures in the VRA reauthorization."

"Chief Justice Roberts recognized that the VRA 'employed extraordinary measures to address an extraordinary problem,'" Sensenbrenner writes. "But while the majority chastised Congress for failing to update Section 4's coverage formula, it ignored the fact that, far from punishing areas for distant history, any covered jurisdiction could bailout of coverage by demonstrating a 10-year period without discrimination."

"The very fact that these jurisdictions have not bailed out is evidence that the VRA's 'extraordinary measures' are still necessary," the congressman correctly argues.

Has the Republican Party lurched so far rightward over the last seven years, that even McConnell, who voted for a 25-year reauthorization of the Act back then, cannot bring himself to offer public support for reinstating it today, as Sensenbrenner insists?

McConnell's dodge of reporters' questions tells us much more about how the Republican Party has changed in the last seven years than it does about how our nation has changed since the 1960s when the VRA effectively ended the Jim Crow era for, what we all had thought, was "once and for all."

In his own testimony before the U.S. Senate Judiciary Committee this July, Sensenbrenner explained: "There is no acceptable remedy for an unfair election after the fact. Section 5 of the VRA was the only federal remedy that could stop discriminatory practices before they affected elections."

He added, rather eloquently: "Remedial actions can never be fully sufficient for elections, because often what is done cannot be undone, and voices silenced can never be heard."

"Voter discrimination still exists," Sensenbrenner declares bluntly -- and, given the new radicalism of his own party, courageously -- at the conclusion of his Op-Ed, "and our progress toward equality should not be mistaken for a victory."

Sensenbrenner's oversight of the 2006 reauthorization process was crucial at the time, and his commitment since the U.S. Supreme Court's reckless and wanton destruction of the heart of the Act is to be greatly commended, no matter the disagreements we've had with the Wisconsin congressman in the past and, undoubtedly, will again in the future. If we can't come together on this one, what can we find unity on anymore?

We never thought we'd say it, but: America, please listen to James Sensenbrenner! And, yes, the BRAD BLOG thanks you, Congressman!

* * *
Post-Script: Sensenbrenner has also been a crucial voice in questioning the unchecked spread of the U.S. domestic surveillance state. As one of the key authors of the Patriot Act following 9/11, he has, since the recent disclosures by former NSA whistle-blower Edward Snowden, been very outspoken in conceding that U.S. national security agencies and the secret Foreign Intelligence Surveillance Court have interpreted that law in ways in which he says Congress never intended.

He has taken proactive steps on these matters as well, including voting in support of the narrowly failed Amash-Conyers amendment just last week, which would have, had it passed, reined in the NSA from the mass collection of phone records of every single American. For that, as well, Sensenbrenner has also earned our respect.

We don't know what he's been drinking of late to put him on the right side of history on so many crucial matters. And, no doubt, we will virulently disagree with the Wisconsin Republican again in the near future. But -- to bastardize Abraham Lincoln's remarks about his notoriously boozing, yet extraordinarily effective Commanding Gen. Ulysses S. Grant -- find out what he's drinking and send every other Republican in Congress a case!