Maybe Jeff Bezos will be a benevolent benefactor. But maybe he'll turn the Post into a newsletter for Amazon 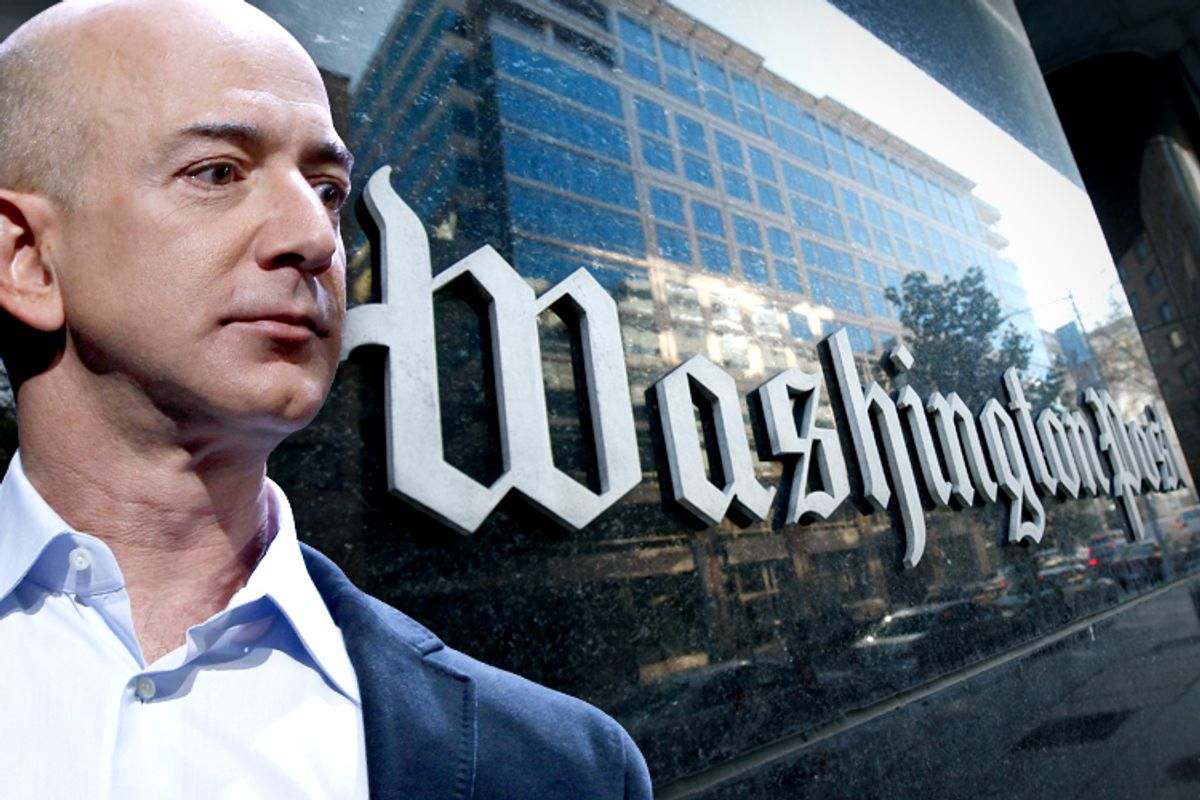 Not long after The Washington Post’s twin journalistic triumphs—breaking the Watergate scandal and being vindicated after publishing the Pentagon Papers—a television show called “Lou Grant” debuted. Ed Asner reprised his role from “The Mary Tyler Moore Show” in a new format: an hour-long drama set inside the (fictional) downtown offices of the Los Angeles Tribune, where Grant presides as city editor. Just as the country was newly awakened to the high stakes of serious journalism, the intrepid staff of the Tribune were spotlighted on prime time, as they proceeded to “crack the city’s toughest stories,” and run into a series of unexpectedly well-rendered journalism dilemmas along the way. For five Emmy-winning seasons, each show was titled with a one-word “slug,” (a old-school tag for draft stories) like “Marathon,” “Bomb,” or “Cop.”

Nancy Marchand played the wealthy and elegant Mrs. Margaret Pynchon, the owner of the paper who took on an active role as publisher after her husband died. She was openly based on Katherine Graham, who had a similar role at the Washington Post for two landmark decades. Following Graham’s model, the Mrs. Pynchon character unfailingly comes down in support of editors and reporters, who are often vulnerable for “afflicting the comfortable.” While Mrs. Pynchon sits comfortably in her eighth-floor office, and has no training in journalism before taking on the top-dog role, she opts for ethics and good journalism even, or especially, when the paper’s integrity is weighed against business concerns. Such quiet heroism might seem the romantic stuff of mere television – except, set against the real-life Graham who was playing out the part over the show’s lifetime, it had actual solidity.

This week, for the first time in eight decades, the ownership of The Washington Post was passed not to a member of the Graham family, but to Jeff Bezos, the founder and CEO of Amazon. For $250 million, or about one percent of his net worth, Bezos added one of the world’s greatest newspapers to his formidable portfolio. What kind of owner will he be? Will he take Katherine Graham as his idealized model, a la “Lou Grant,” or will his other business interests dilute the remaining power of a strong, if beleaguered, newspaper?

Bezos announced few details for what he’ll do with the Post in his letter to the paper’s staff (nor has he explained why Slate, which is Post-owned and seemingly more in line with Bezos’ digital interests, was left out of the purchase). So, for now, we are left to take a look at Amazon, and extrapolate from Bezos’ leadership there to what it may foretell for the Post’s future.

Amazon sells thousands of things that aren’t books. With a few swift clicks, you can buy yourself a jar of powdered peanut butter, a crossbow, a pair of chest waders, and a forty-pound bag of Precious Cat Ultra Premium Clumping Cat litter. But it is the book industry that Amazon has utterly transformed—not just through the creation of an innovative online platform for selling books and the launch of the Kindle, but also by publishing its own books through an imprint, and—there is no more exact way to put this—by bullying publishers large and small into selling books for less than it costs to print them. As of 2010, an estimated 75 percent of online book purchases in the United States were made through Amazon, giving the company an outsized influence on what is and is not published, who gets to stay in business and who does not, and whether or not books are accessible to consumers. Memorably, George Orwell’s 1984 was erased from all Amazon Kindles in 2009. As Onnesha Roychoudhuri wrote in an investigation for The Boston Review, Amazon’s near-monopoly has a nearly immeasurable impact on our culture. When the CEO of the MacMillan met with Amazon executives a few years ago to exert more control over the pricing of the publisher’s books, for example, Amazon removed the “buy” button from every single MacMillan book on the site – including major imprints like Farrar, Straus, and Giroux; Henry Holt; and Picador. And one wonders if, when Amazon reaches its presumed goal of 100 percent market share, its tantalizingly low prices for consumers will continue.

Those low prices are likewise abetted by labor practices that are reportedly disgraceful. The Allentown Morning Call has the most revealing investigation into brutal heat and speed workers are expected to endure in an Amazon warehouse. The company actually paid to have paramedics parked in ambulances outside during a summer heat wave rather than adjust working conditions:

Those who couldn't quickly cool off and return to work were sent home or taken out in stretchers and wheelchairs and transported to area hospitals. And new applicants were ready to begin work at any time. An emergency room doctor in June called federal regulators to report an "unsafe environment" after he treated several Amazon warehouse workers for heat-related problems. The doctor's report was echoed by warehouse workers who also complained to regulators, including a security guard who reported seeing pregnant employees suffering in the heat.

What’s more, the company has built a reputation for tax sneakiness, with its long and fierce campaign to avoid the internet sales tax and its slippery habit of sidestepping taxes even in states where it has infrastructure: through this kind of entity isolation, Amazon created subsidiaries to avoid creating any kind of formal nexus in nearly all states, so it wouldn't have to pay into the public coffers.

That said, Amazon clearly has strengths. It makes a vast amount of information publicly available, amounting to a sort of comprehensive literary database. As I've written before, it is capable of making lesser-known books accessible through a system that was truly innovative and brilliant at its founding. Its publishing arm prioritizes contemporary fiction in translation, which typically has a difficult time reaching American audiences.

And it’s not as if Bezos is treading on pristine territory: The Washington Post itself has a patchy recent history. As owners of Kaplan, the test company that later expanded into a for-profit online “college,” they supported a company accused of taking advantage of students while raking in government money. (The New York Times wrote an in-depth  investigation about it.) While the Graham family were by all accounts remarkably generous and thoughtful owners, they made significant errors, by, for example, not taking the paper national when they had the chance. If they had, the Post could have been as regular a presence at the Starbucks in, say, Omaha or Indianapolis as The New York Times or the Wall Street Journal.

The best scenario for the newspaper buy? Jeff Bezos, who is worth nearly $30 billion, will set a newly radical precedent for investing in our major metropolitan dailies, rather than cutting them to death (hello, Advance Publications). He will guide a sorely-needed revolution in the Post’s business model, ensuring its sustainability so that its editorial staff can report on the important stories of the day—and earn a decent wage doing it. Bezos’ expertise in clean and navigable online platforms will dramatically improve the Post’s online presence, and his indisputable skill in developing physical distribution structures will make delivery of the Post’s print paper much more efficient. Bezos will be editorially independent from the paper—even, or especially, when it comes to business reporting, or the Post’s excellent book section. He will also not muck around if the editorial board wants to weigh in on, say, the internet sales tax. He will understand that a lot of the best journalism is expensive, even money-losing—think of foreign bureaus, investigations that involve at least a year slogging through bureaucracy, and important reporting that takes up the time of top talent but nonetheless yields only a story or two—and he will support it, because the Post’s profit margin is not his top concern. Rather, Bezos will, as James Fallows described it, launch “a phase in which this Gilded Age's major beneficiaries re-invest in the infrastructure of our public intelligence” – perhaps inspiring his tech mogul peers to make a similar stake in our most crucial vehicles for information, ideas, and transparency.

I hope that’s what’s coming. But I’m worried that the Post’s credibility will now serve to amp up Bezos’ prestige, giving a gloss of seriousness to the man whose labor practices are sweatshop-style abysmal, whose flouting of taxes takes astonishing nerve, and whose business model at Amazon has had a devastating impact on the book industry. It’s apparent that Bezos did not buy the Post because it will make him money. He bought it for its reputation and influence, particularly in a city where policy decisions are being made that substantially impact Amazon. (Bezos is staying in Seattle, by the way, which limits his accountability to the community his paper reports on.) Worst-case scenario: Bezos effectively liquidates the paper, leveraging it as sort of newsletter that, on borrowed prestige, touts policies favorable to Amazon, and saturates the media landscape with what amounts to Amazon-related product placement.

“Lou Grant” is an increasingly old-fashioned show. I watch it as a twenty-first-century journalist—a freelancer at that—and it’s an exercise in borrowed nostalgia. Reporters race to break stories by bringing along dimes that they’ll use in pay phones to dictate copy, and they’ll get an aunt or friend to babysit the phone booth to make sure it’s available when they need it. Beat reporters spend a lot of time in the Hall of Records. The photographer works on prints in the paper’s dark room. The Los Angeles Tribune has a single female editor (and she works on what used the be the “women’s section.”)

But the datedness of the technology, and of how we uncover and access news of our world, needn’t overshadow the things that never go out of date: editorial independence, fair-mindedness, transparency, and the vitality of that comes with news reporting at its best. The Washington Post still carries prestige because of a long history of abiding by these values. In the new Bezos era, the paper—and all of us with a stake in its journalism—deserve a model that makes this the stuff of the future, and not just old stories.