Whatever happened to bath salts, the new drug that ruled America in the summer of 2012? 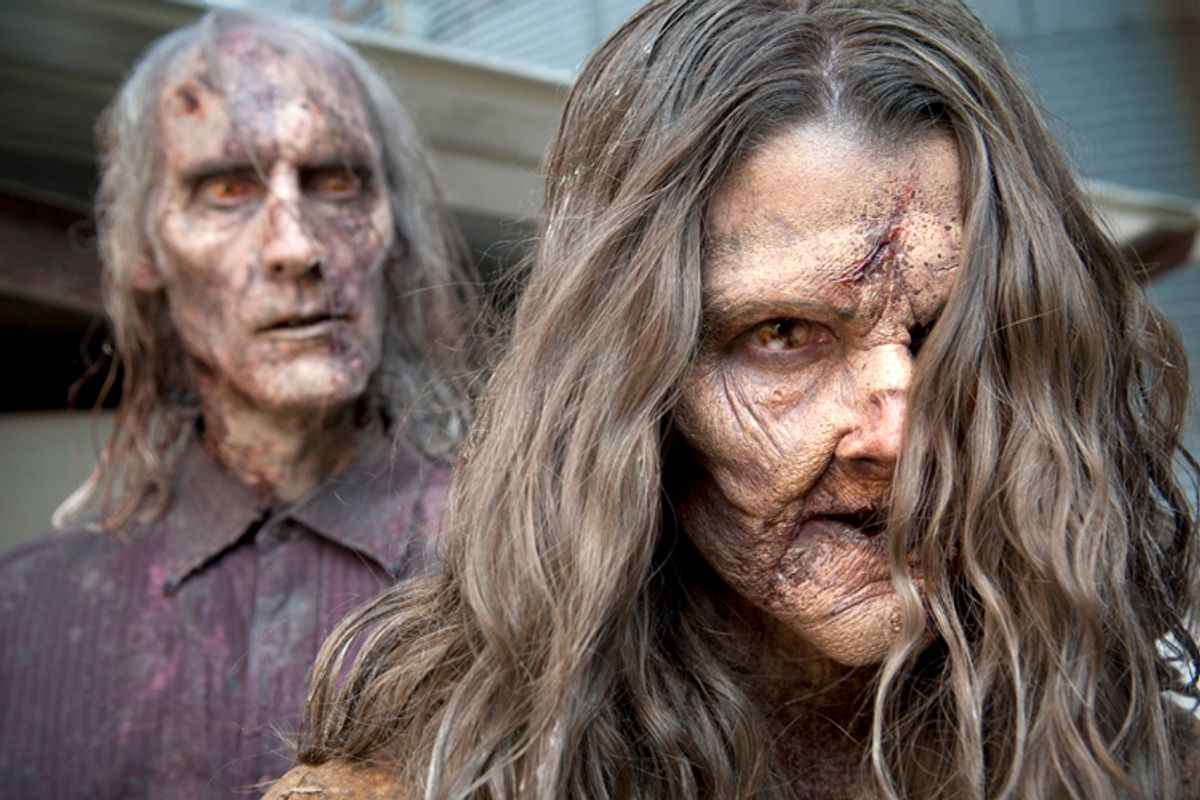 A still from "The Walking Dead" (AMC/Gene Page)
--

For a moment last year, zombies were real. Local newspapers carried alarming headlines about otherwise normal people turned into face-eating cannibals, Hulk-like murderous berserkers, and psychotic naked rampagers. It was all thanks to "bath salts," a new synthetic amphetamine that, despite its innocuous name, scientists said was more potent and addictive than meth. It reached a fever pitch after initial reports suggested a Florida man high on the drug chewed off a homeless man's face. Experts braced for the apocalypse, local news anchors warned of a craze sweeping the country, and parents cowered in fear as it seemed like anyone's innocent son or daughter or brother or husband could be the next Mr. Hyde.

A year later, usage has plummeted and the drug that once had a gripping public mythology has almost completely fallen out of the discourse. While you can still find occasional headlines about bizarre bath salt-induced rampages, they're fewer and farther between, and there are no more "Today" show segments or Dr. Phil specials. In the past six months, there have been zero mentions of the drug on MSNBC, one passing reference on CNN, and two quick jokes made about it on Fox News, but no segments or interviews on any cable networks. "By late 2012, the tide has mostly receded," explained Peter Reuter, a longtime drug policy researcher at the University of Maryland and RAND.

Here's what Google searches for the drug look like since 2011.

Indeed, the data from calls to poison control centers tell the story of a drug craze that came and went like a flash in the pan. "Bath salts," a synthetic cathinone with effects similar to amphetamines or cocaine, first appeared in 2009, according to the DEA, as a legal drug often marketed as "plant food" and labeled "not for human consumption." It could be found in gas stations, head shops and convenience stores, and was sometimes sold without the owners even understanding what it was.

According to the American Association of Poison Control Centers, local agencies received just 304 calls about bath salts in 2010. That number exploded in 2011, jumping to at least 6,136 calls to centers across the country. The call volume remained high in the beginning of 2012, and then ticked up sharply in June, leading to a slew of new media coverage, but fell off even faster in July and August and has stayed low since. There were a total of 2,657 calls last year, but this year, there have been just 605 calls through July 31.

Usage of the drugs was never actually very high among teenagers, despite the media attention, according to data from the University of Michigan's Monitoring the Future study, which researchers say is the only scientific data on usage among any age group. The study has surveyed drug use among 8th, 10th and 12th graders every year since 1991 and in 2012 found bath salt usage to be "very low," with just 0.8 percent, 0.6 percent and 1.3 percent of students, respectively, in grades 8, 10 and 12, reporting experimenting with it. Compare that to 36 percent of high school seniors who say they've used marijuana, and 28 percent of 10th graders.

Part of the drop is undoubtedly thanks to a national crackdown on the once-legal drug. Last July, President Obama signed a sweeping and somewhat controversial ban on "bath salts," synthetic marijuana and other related drugs. Sen. Chuck Schumer, who helped push the bill, called it "the final nail in the coffin for the legal sale of bath salts in smoke shops and convenience stores in New York State and throughout the rest of the country."

It was controversial because many said it would be, as Wired's Brandon Keim wrote, "obsolete before the ink of his signature dried," as manufacturers invented new synthetic drugs. Indeed, Zane Horowitz, the medical director of the Oregon Poison Control Center, concurred. "Basically new ones have been invented and distributed to replace those banned by the law last summer," he said in an email. New drugs, including hallucinogens like 2C-I, which has a similar effect to that of Ecstasy, have already hit the market, leading drug enforcement officials to often compare the fight against synthetic drugs to a game of whack-a-mole.

But the law did at least succeed in stopping the drugs from being sold openly, a move that, along with state laws doing the same, has been credited with contributing to the collapse in bath salt usage. And while no one we spoke with could say for sure, the sensational media coverage may have turned off potential users who concluded it was just too risky.

Just as the Miami face-eating incident marketed a high-water mark for the public image of bath salts, it also presaged bath salts' decline as the latest local news fetish for scary stories about a new thing that may kill your child (tune in at 11:00 to find out). Days after the story broke, medical examiners said the cannibal actually had no bath salts in his system, just marijuana.

Writing in GQ, Robert Moor cast doubt on that determination -- the drug was so new that it was easy for toxicology reports to miss one of its many variations -- and warned that the risks of the drug and its ilk are serious and deadly. The attack was reminiscent of "amphetamine psychosis," and studies in mice have even found that when used in groups, the drug can make otherwise docile creatures violent and murderous.

And yet, despite the real danger, all the talk about bath salts was "overblown." "As for the zombie apocalypse," he writes, "bath salts aren't likely to cause a dawn of the dead any time soon -- if for no other reason than that most Americans still prefer downers." Alcohol, marijuana and prescription pain killers are vastly more popular than amphetamines.

And they seem to prefer their drugs old school as well. As Reuter, the University of Maryland expert, mused in a recent research paper, synthetic drugs haven't really caught on. "It is puzzling that the wonders of modern chemistry have not yet turned up substances that can outcompete the long-standing sources of illicit altered states, like alcohol and marijuana," he wrote.