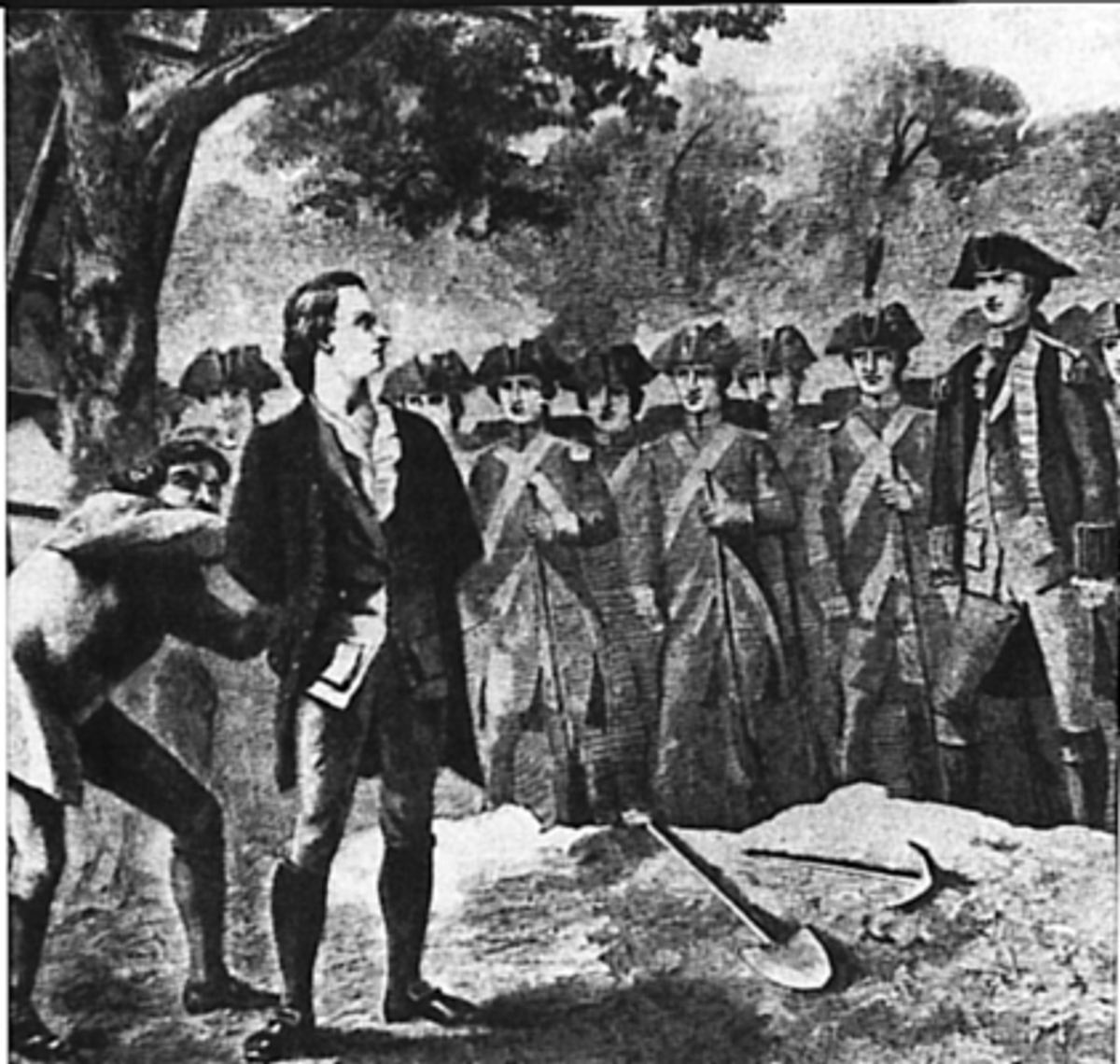 Hey, let’s talk spying!  In Surveillance America, this land of spookery we all now inhabit, what else is there to talk about?

Was there anyone growing up like me in the 1950s who didn’t know Revolutionary War hero and spy Nathan Hale’s last words before the British hanged him: “I only regret that I have but one life to give for my country”?  I doubt it.  Even today that line, whether historically accurate or not, gives me a chill.  Of course, it’s harder these days to imagine a use for such a heroically solitary statement -- not in an America in which spying and surveillance are boom businesses, and our latest potential Nathan Hales are tens of thousands of corporately hired and trained private intelligence contractors, who often don’t get closer to the enemy than a computer terminal.

What would Nathan Hale think if you could tell him that the CIA, the preeminent spy agency in the country, has an estimated 20,000 employees (it won’t reveal the exact number, of course); or that the National Geospatial-Intelligence Agency, which monitors the nation’s spy satellites, has a cast of 16,000 housed in a post-9/11, almost $2 billion headquarters in Washington’s suburbs; or that our modern Nathan Hales, multiplying like so many jackrabbits, lack the equivalent of a Britain to spy on.  In the old-fashioned sense, there really is no longer an enemy on the planet.  The modern analog to the British of 1776 would assumedly be… al-Qaeda?

It’s true that powers friendly and less friendly still spy on the U.S.  Who doesn't remember that ring of suburban-couples-cum-spies the Russians planted here?  It was a sophisticated operation that only lacked access to state secrets of any sort and that the FBI rolled up in 2010.  But generally speaking, in a single-superpower world, the U.S., with no obvious enemy, has been building its own system of global spying and surveillance on a scale never before seen in an effort to keep track of just about everyone on the planet (as recently released NSA documents show).  In other words, Washington is now spy central.  It surveils not just potential future enemies, but also its closest allies as if they were enemies.  Increasingly, the structure built to do a significant part of that spying is aimed at Americans, too, and on a scale that is no less breathtaking.

Today, for America’s spies, Nathan Hale’s job comes with health and retirement benefits.  Top officials in that world have access to a revolving door into guaranteed lucrative employment at the highest levels of the corporate-surveillance complex and, of course, for the spy in need of escape, a golden parachute.  So when I think about Nathan Hale’s famed line, among those hundreds of thousands of American spies and corporate spylings just two Americans come to mind, both charged and one convicted under the draconian World War I Espionage Act.

Only one tiny subset of Americans might still be able to cite Hale’s words and have them mean anything.  Even when Army Private First Class Bradley Manning wrote the former hacker who would turn him in about the possibility that he might find himself in jail for life or be executed, he didn’t use those words.  But if he had, they would have been appropriate.  Former Booz Allen employee Edward Snowden didn’t use them in Hong Kong when he discussed the harsh treatment he assumed he would get from his government for revealing the secrets of the National Security Agency, but had he, those words wouldn’t have sounded out of whack.

The recent conviction of Manning on six charges under the Espionage Act for releasing secret military and government documents should be a reminder that we Americans are in a rapidly transforming world.  It is, however, a world that’s increasingly hard to capture accurately because the changes are outpacing the language we have to describe them and so our ability to grasp what is happening.

Take the words “spying” and “espionage.”  At a national level, you were once a spy who engaged in espionage when, by whatever subterfuge, you gathered the secrets of an enemy, ordinarily an enemy state, for the use of your own country.  In recent years, however, those being charged under the Espionage Act by the Bush and Obama administrations have not in any traditional sense been spies.  None were hired or trained by another power or entity to mine secrets.  All had, in fact, been trained either by the U.S. government or an allied corporate entity.  All, in their urge to reveal, were freelancers (a.k.a. whistleblowers) who might, in the American past, have gone under the label of “patriots.”

None was planning to turn the information in their possession over to an enemy power.  Each was trying to make his or her organization, department, or agency conform to proper or better practices or, in the cases of Manning and Snowden, bring to the attention of the American people the missteps and misdeeds of our own government about which we were ignorant thanks to the cloak of secrecy thrown over ever more of its acts and documents.

To the extent that those whistleblowers were committing acts of espionage, surreptitiously taking secret information from the innards of the national security state for delivery to an “enemy power,” that power was “we, the people,” the governing power as imagined in the U.S. Constitution.  Manning and Snowden each believed that the release of classified documents in his possession would empower us, the people, and lead us to question what was being done by the national security state in our name but without our knowledge.  In other words, if they were spies, then they were spying on the government for us.

They were, that is, insiders embedded in a vast, increasingly secretive structure that, in the name of protecting us from terrorism, was betraying us in a far deeper way.  Both men have been termed “traitors” (Manning in military court), while Congressman Peter King called Snowden a “defector,” a Cold War term no longer much in use in a one-superpower world.  Such words, too, would need new definitions to fit our present reality.

In a sense, Manning and Snowden could be said to have “defected” -- from the U.S. secret government to us.  However informally or individually, they could nonetheless be imagined as the people’s spies.  What their cases indicate is that, in this country, the lock-‘em-up-and-throw-away-the-key crime of the century is now to spy on the U.S. for us.  That can leave you abused and mistreated in a U.S. military prison, or trapped in a Moscow airport, or with your career or life in ruins.

In terms of the national security state, “spying” now has two preeminent meanings.  It means spying on the world and spying on Americans, both on a massive scale.  In the process, that burgeoning structure has become Washington’s most precious secret, ostensibly from our enemies, but actually from us and, as we’ve learned recently, even from our elected representatives.  The goal of that state, it seems, is to turn the American people into so much absorbable, controllable intelligence data, our identities sliced, diced, and passed around the labyrinthine bureaucracy of the surveillance world, our bytes stored up to be “mined” at their convenience.

If Edward Snowden’s documents reveal anything, it’s that the frenzy of construction -- from new headquarters to new data centers -- that has been the mark of the intelligence world since 9/11 has been matched by a similar frenzy of construction in the world of online and telephonic communications.  We undoubtedly don’t know the full scope of it yet, but it’s already obvious that from PRISM to XKeyscore the U.S. Intelligence Community has been creating a labyrinth of redundant surveillance mechanisms that mimics the vast growth and redundancy of the intelligence world itself, of the 17 organizations and agencies in that “community” and all the little outfits or offices not even counted in that staggering figure.

The truth is that, thanks to our “spies,” we know a great deal more about how our American world, our government, really works, but we still don’t know what this thing that's being built really is.  Even its creators may be at sea when it comes to what exactly they are in the process of constructing.  They want us to trust them, but we the people shouldn’t put our trust in the generals, high-level bureaucrats, and spooks who don’t even blink when they lie to our representatives, pay no price for doing so, and are creating a world that is, and is meant to be, beyond our control.  We lack words for what is happening to us.  We still have to name it.

It is at least clearer that our world, our society, is becoming ever more imperial in nature, reflecting in part the way our post-9/11 wars have come home.  With its widening economic inequalities, the United States is increasingly a society of the rulers and the ruled, the surveillers and the surveilled.  Those surveillers have hundreds of thousands of spies to keep track of us and others on this planet, and no matter what they do, no matter what lines they cross, no matter how egregious their acts may be, they are never punished for them, not even losing their jobs.  We, on the other hand, have a tiny number of volunteer surveillers on our side.  The minute they make themselves known or are tracked down by the national security state, they automatically lose their jobs and that’s only the beginning of the punishments levied on them.

Those who run our new surveillance state have not the slightest hesitation about sacrificing us on the altar of their plans -- all for the greater good, as they define it.

This, of course, has nothing whatsoever to do with any imaginable definition of democracy or the long-gone republic.  This is part of the new way of life of imperial America in which a government of the surveillers, by the surveillers, for the surveillers shall not perish from the Earth.

Those who watch us -- they would undoubtedly say “watch over,” as in protect -- are no Nathan Hales.  Their version of his line might be: I only regret that I have but one life to give for my country: yours.