Fetal pain is a lie: How phony science took over the abortion debate 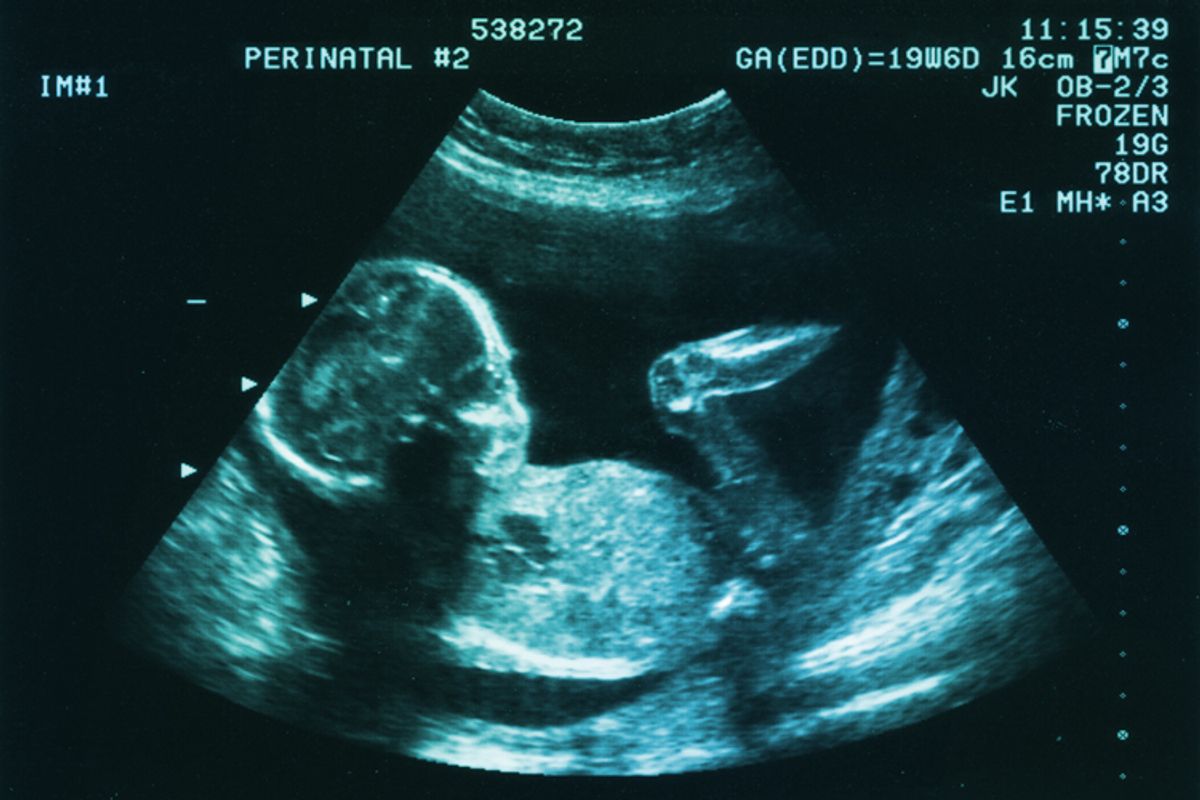 Since Nebraska first jump-started the trend back in 2010, close to a dozen state legislatures across the country have passed laws banning abortion at 20 weeks. Most of these restrictions are given grave-sounding titles like the “Pain-Capable Unborn Child Protection Act,” or some near-identical riff on the words “fetal," “pain” and “protection.” All of them, no matter what they’re called, rest on the stated premise that a fetus can experience pain at 20 weeks, and that this is a sufficient justification to ban all abortions after this gestational stage.

But “fetal pain” in the popular discourse is a nebulous concept, one that lawmakers like Jodie Laubenberg, Trent Franks and others haven’t much bothered to define or help ground in available medical evidence.

Probably because there really isn’t any. The limited research used to support such claims has been refuted as pseudoscience by both the Journal of the American Medical Association and the British Royal College of Obstetricians and Gynecologists. (Not to mention smaller studies from researchers at Harvard University, University College London and elsewhere.)

“We know a lot about embryology [in the field]. The way that a fetus grows and develops hasn't changed and never will,” Dr. Anne Davis, a second-trimester abortion provider, associate professor of clinical obstetrics and gynecology at Columbia University Medical Center, and consulting medical director at Physicians for Reproductive Health, told Salon. “And what we know in terms of the brain and the nervous system in a fetus is that the part of the brain that perceives pain is not connected to the part of the body that receives pain signals until about 26 weeks from the last menstrual period, which is about 24 weeks from conception.”

Because the neural structures necessary to feel pain have not yet developed, any observable responses to stimuli at this gestational stage -- like the fetal “flinching” during an amniocentesis -- are reflexive, not experiential. Which is to say, the fetus at 20 weeks can't actually feel anything at all. Which is to say, the fundamental justification for these laws is a really big, really popular lie.

“That’s just where the science is. You can have an opinion about that, but it doesn’t change the information,” Davis says. “Science is not going to get the brain to connect faster.” (Neither, it should be noted, will the hoping, wishing or foot-stomping of politicians like Marco Rubio and his anti-choice contemporaries.)

And yet, despite ample research debunking claims about fetal pain, the political narrative arguing otherwise continues to dominate. Facts about embryology and the science of gestational development are often ignored outright or framed as somehow extraneous to the debates taking place, and reproductive rights opponents have been wildly successful in selling these bans as emotional issues -- that support for them should come from the gut, not from thick tomes of medical facts.

And, at least superficially, their framing seems to be working. According to recent survey, a narrow majority of Americans claim to support these bans, and, troublingly, the pseudoscience behind fetal pain has also begun to crop up in the examination room among women seeking abortions.

“Patients are now asking me about fetal pain. This was not happening 15 years ago," Davis says. "When you’re sitting in your office with a woman who is 22 weeks into a pregnancy with a severe fetal anomaly -- she’s depressed, she’s stressed and now she’s worried, 'Is my baby going to feel pain?' It’s just another thing these women have to struggle with. And why? These are created concerns. They are not based in science, they are based in politics.”

And it's the life experiences and medical needs of these women, unfortunately, that are all too often left out of the debate. Most people don't know -- and don't want to know -- why women have abortions at or after 20 weeks, which account for approximately 1.5 percent of all abortions.

The reasons why vary, though they are never simple, as Davis knows quite well.

"A patient of mine -- already a mother to a young child, really happy about the pregnancy, husband is really happy about the pregnancy -- went in for her first ultrasound and was told everything was fine." But when the patient came back at 18 weeks for a follow-up, Davis says, her doctors told her to brace for difficult news. The fetus' heart was not developing normally, and would require multiple operations to fix. Still, after meeting with a pediatric cardiologist to discuss what it would mean to raise a baby with chronic health condition, the couple decided to continue with the pregnancy.

Then came their 20-week checkup.

The heart condition had gotten worse, and the latest scans picked up new information: a systemic problem had emerged, affecting other organs in the body. The outcome was dire. After a week of painful discussions within their family, the couple decided to terminate the pregnancy -- at 21 weeks.

Fetal conditions like this, though rare, Davis says, are not diagnosable earlier in the pregnancy. "You cannot see this stuff in the first trimester. A woman could be in there every day up until 18 weeks getting ultrasounds and a doctor still wouldn't be able to catch these issues any earlier."

Which is exactly why medical discretion is so important, and why it's so crucial that lawmakers allow doctors to be doctors -- medical experts who know how to serve the best interests of their patients. But laws like Texas' 20-week ban eliminate a physician's ability to be adaptive to the unique circumstances of their patients' health. Instead, nominal exceptions for the health and life of the mother in these laws can make otherwise safe abortions dangerous by forcing doctors to wait until their patient's condition deteriorates before they can legally act to terminate a pregnancy and save their lives.

"You have a lady who ruptures her membranes -- there's no way she's going to get to 24 weeks," Davis says. "But just looking at her now? She has normal vitals. So what do you tell her [in a state with a 20-week ban]? 'You have to sit in the hospital and wait until you get very sick. Then we can end the pregnancy.'

"If you did that under any other circumstance it would be wild negligence. If you had a patient that you knew was going to get an infection and did nothing, what kind of doctor would you be?"

But that is precisely what these laws do -- force doctors to choose between saving a patient's life or breaking the law. It's a lose-lose situation that is becoming frighteningly more common.

But the reproductive rights movement's greatest weapon against such legislation -- and anti-choice activists trying to control the narrative on abortion care in the United States -- is the truth, Davis says.

"Real situations in real life are very different than what we're hearing from politicians. The whole debate -- the way the whole thing is framed -- is very shaming to patients. Let's bring respect back into it. Treat people with respect. Have compassion for patients. Do what's right for them."

But mostly, she says, it's about letting doctors be doctors, and keeping politics out of it.

"Let us do our jobs. Let us take care of our patients."