Honey Boo Boo could be my neighbor

Reality TV makes fun of working-class families like mine, and everyone loses 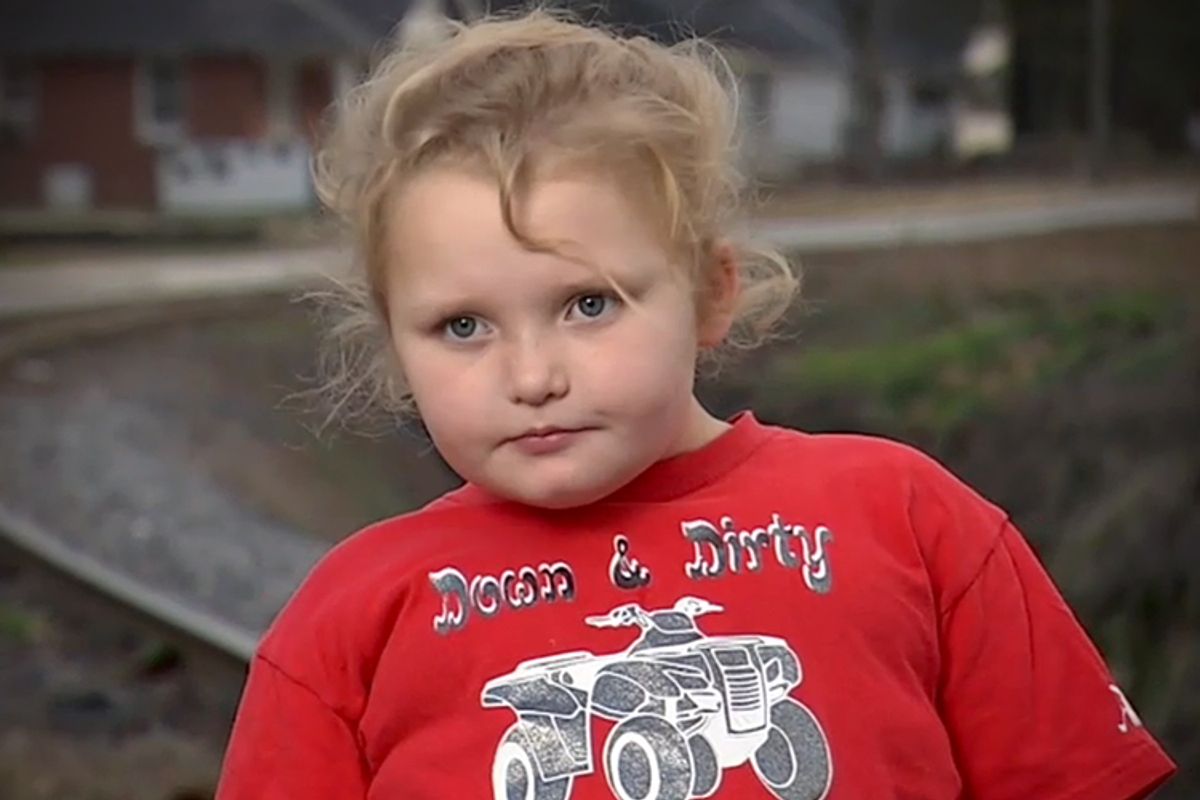 This Sunday, after the pseudo-science documentary “Megaladon: The Monster Shark Lives,” the Discovery Channel aired Shark After Dark, its new Shark Week wrap-up show. Shortly after host Josh Wolf consumed a forkful of shark bait – “chum,” as the show continually referred to it with tongue firmly in cheek – Wolf welcomed to the stage the “stars” of two of Discovery’s upcoming series. There was Tickle, a droopy-eyed drunk spinning off from “Moonshiners,” and Jeff Porter, the shirtless focus of this fall’s junkyard docu-series “Porter Ridge.” Tickle, wearing a shirt that said “Tickle for President,” looked relatively overdressed next to Porter, who lounged comfortably on the set’s couch, his sun-cooked chest glowing under the lights.

What followed was one of the strangest non sequiturs of an interview ever to air on national TV. On a shark-themed program Wolf asked Tickle if he liked to “get drunk” and Porter why he wasn’t wearing a shirt. The crowd laughed at their responses and after some awkward conversation, Wolf took off his shirt too and posed uncomfortably next to Porter.

Now, besides network synergy, why were Tickle and Porter on the show? Obviously, based on the tone, they were brought in for comedic relief. This isn’t a new concept; several popular shows right now focus on “simple people,” or rednecks, as they’re called. Examples include “Here Comes Honey Boo Boo,” “Duck Dynasty” and any number of pawn shop or swamp-centered series, but the philosophy behind them needs some fresh examining. After all, these are entertainments focused on making light of one of the most vulnerable parts of our population: the poor.

Perhaps I’m a bit sensitive when it comes to this. I grew up in a dirt-poor family in a small Hoosier town roughly 30 miles outside of Spencer, Ind., the location of Discovery’s new show “Porter Ridge.” Where I live and work currently in Southeastern Georgia, I’m not too far removed from the Honey Boo Boo clan. They regularly visit my town’s water park and shop at our mall. My family and my life are populated with simple folk who, if the camera were turned on them, could easily be made to look like dullards through clever editing. It could be their faces plastered all over T-shirts, à la "Duck Dynasty," or sitting on that couch while some unfunny “comedian” asks why they don’t wear shirts or if they like to get drunk.

Networks like Discovery, TLC,and A&E are peddling a brand of ignorance and intolerance that somehow flies under our society's ordinary radar for offensiveness. Their victims are the poor – people who have little to no political clout, lack a noticeable profile and have always been the most susceptible target of ridicule and scorn among the classes.

Some could argue that these programs simply document different subsets of the culture and accurately report their findings.

Then why, I ask, is it necessary, in all of these shows, to overlay subtitles when a character misspeaks or mispronounces a word? Why do the producers of “Here Comes Honey Boo Boo” rely on, as Megan Carpentier points out, “B-roll [that] show[s] a freight train passing within yards of the house”? And did Terry Porter show up to the studio Sunday sans shirt, or was he encouraged to take it off by producers before the cameras began to roll?

The most common argument is that these shows are all in good fun. And that would be fine if there weren’t real-world consequences to this endless carnival of the impoverished-on-display.

Shows like “Porter Ridge,” “Duck Dynasty” and “Honey Boo Boo” actively perpetuate stereotypes that hamper efforts to improve poor people's lives. “Porter Ridge” and “Honey Boo Boo” go out of their way to show poverty as being something like a party. These people might not have money, but they’re certainly enjoying themselves. Similarly, they give us ready-for-prime time examples of uneducated, inarticulate people; the implicit argument is that they deserve their poverty.

The truth is, poverty is a problem or concern of a majority of Americans, a fact made more stark by statistics recently released by the Associated Press that “four out of five U.S. adults struggle with joblessness, near-poverty or reliance on welfare for at least parts of their lives.”

Meanwhile, the crew at “Duck Dynasty,” which has much in common with the traditional “poor hicks suddenly get rich” entertainments like “Ma and Pa Kettle” and “The Beverly Hillbillies,” leads viewers to believe that, if the poor were harder-working, or had more luck, they’d lift themselves up by the proverbial bootstraps and wouldn’t need to rely on public assistance.

As a result, we get polls like this one, where nearly half the respondents blame “the continuing problem of poverty” on either “too much welfare,” “lack of educational opportunities” or “lack of work ethic.”

The truth is that the new face of poverty, the one that isn’t TV-ready or uncomplicated, belongs to men and women who have jumped through every expected hoop – whether it be earning degrees or working hard – and still find themselves struggling with real-world complications like credit-card debt, student loans, mortgages, under- and unemployment.

The news is littered with facts and figures that show poverty is not earned by inactivity or weakness; rather, it's a complicated problem that is growing more complicated by the day. But the characters on our television perpetuate, indirectly, the idea that those suffering have it coming through some personal fault, whether it be laziness, lack of education or substandard personal hygiene. That needlessly hurts hardworking people who, much like these fast-food employees seeking a living wage, have been forgotten by our radically changing economy.

And it is, much like having to sit through an episode of one of these crappy shows, senselessly cruel.