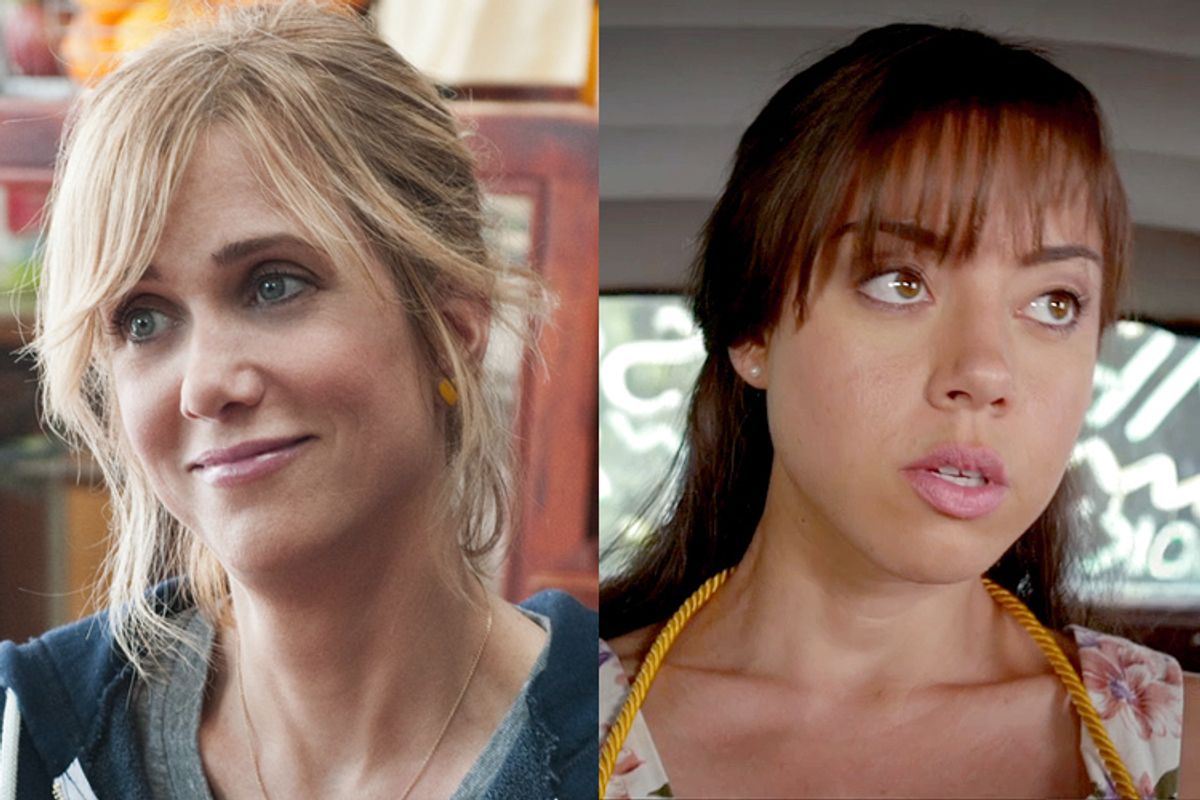 Kristen Wiig in "Bridesmaids," Aubrey Plaza in "The To Do List."
--

Gender studies majors and lady bloggers, take note: The figurehead of contemporary American feminism is not Hillary Clinton, or Sheryl Sandberg, or even Tina Fey. It’s Aubrey Plaza in "The To-Do List." As Brandy Klark, an uptight high school valedictorian on a desperate quest to lose her virginity, Plaza is earning raves for her performance, which L.A. Weekly’s Inkoo Kang says offers a “radically feminist” take on female sexuality. The New York Post and Policy Mic concur, respectively calling the film “a feminist 'American Pie'” and claiming it will “change everything you know about women’s sexuality.”

Judging by the rhapsodic reviews, one would think "The To-Do List" was the 21st century, sex-positive equivalent to Sojourner Truth’s “Ain’t I a Woman?” speech. But it is not. Like most raunchy, female-driven comedies produced in the wake of "Bridesmaids," "The To-Do List" is not that radical; nor is it even, in some respects, inherently feminist. To paraphrase Inigo Montoya, people keep using that word, but I don’t think it means what they think it means.

I would like to make something clear: I didn’t hate "The To-Do List." In fact, I kind of liked it, just as I liked "Bad Teacher," or "Bachelorette," or "What’s Your Number," or any of those other lady-driven, R-rated comedies the market has been flush with for the past few years. It’s just that, ever since "Bridesmaids" proved that women were willing to shell out $15 to see something other than"Sex and the City," there’s been a rash of raunchy, female-oriented rom-coms that seem hell-bent on proving that the girls can play just as hard as the boys, and none of them contain a tenth of the warmth and pathos and humor of the original template. For those who have a vested interest in gender politics and comedy (and poop jokes), it’s a "Bridesmaids" world — we just live in it. And that’s not necessarily a good thing.

This is not to say that "The To-Do List" is lacking fangs, or insight: It has both. And the movie does make a case for women wanting to have sex just as much as men do, which is sadly still considered a radical proposition by some (mainly GOP congressmen and open-mic stand-ups). What is dishonest about "The To-Do List," however, and the post-"Bridesmaids" female raunch comedy in general, is that it wants to have its cake and eat it too; it pays lip service to feminism, without trying to break any significant ground in the way women on film are portrayed. They seem intent on taking male adolescent tropes and, rather than serving as a corrective to them, presenting them in a different, candy-colored guise. The result is an interminable series of one-upmanship in which the girls try to prove they can swig semen, eat poop and generally be just as rude, crude and nasty as the guys are — while looking cute and non-threatening in the process.

For instance, one hallmark of the female-driven raunch comedy is that it makes the case that women have, and enjoy, sex. In theory, this is all well and good, but the trouble is that sexual desire is always presented conditionally; it’s not just sex women want, but sex and something else. In "Bad Teacher," Cameron Diaz’s Elizabeth uses sex as a tool to manipulate those around her; in "Easy A," Emma Stone’s high school senior Olive uses it to enhance her social reputation, while secretly remaining a virgin.

Similarly, in the first three-quarters of "The To-Do List," Brandy sweeps through the items on her checklist without actually wanting sex all that much. She pursues blow jobs, hand jobs and dry-humping with the same detached, robotic vigor she applies to making her pre-college checklist; for her, losing your virginity is something that you should want, that you should do before you go to college. The fact that she includes such items as “titty-fucking,” giving a “rim job,” and getting a “pearl necklace” — acts that are, by most accounts, not particularly pleasurable for the woman involved — speaks to her sense of detachment about sex in general (cunnilingus, for instance, is a mere afterthought, until Donald Glover offers himself up as a willing volunteer). Brandy’s obsessive-compulsiveness about fulfilling all the items on her checklist is funny, but it doesn’t exactly speak volumes about her own sexual empowerment.

It also must be said that, in spite of the girl-power themes resonating through these films, that the vast majority of the women starring in them— Cameron Diaz, Anna Faris, Emma Stone, Kirsten Dunst, Aubrey Plaza — are cisgendered, thin, able-bodied, Caucasian and very, very pretty (the one exception to this is the cast of "Bridemaids," which includes the plus-size Melissa McCarthy and Maya Rudolph, who is part African-American). This is, of course, par for the course in Hollywood, but movies that claim a feminist bent should be held to a higher standard. When I think of feminism, I think of a wide range of female bodies and experiences, and not all of those bodies look good in Spandex cocktail dresses or, as Plaza demonstrates in "The To-Do List," a vast array of floral crop tops. To portray a thin, conventionally attractive white woman in a sexual context is not inherently subversive. In fact, you can see it for free on YouPorn or Tube8, and even those women are more diverse, in terms of race and body type, than Emma Stone and Kirsten Dunst are.

But by far the most insidious trope perpetuated by "The To-Do List" presents itself toward the end of the film, right before Brandy finally loses her virginity. At this point, she’s lost her friends (the awesome Alia Shawkat and Sarah Steele) and the affection of Cameron, the one boy who truly loves her (a simpering Johnny Simmons) to her sexual walkabout.  But the most egregious casualty of Brandy’s relentless quest to swipe her V-card is herself.

At the beginning of the movie, Brandy is a mousy, bespectacled virgin — but a cool, individualistic one at that. She’s the high school valedictorian, the founder of a riot grrl zine, and she's just won a full ride to Georgetown. Although she’s uptight and obsessive compulsive and wears underwear with the days of the week printed on them, she seems pretty content with being herself and watching "Beaches" with her friends. By the time she’s got a few notches under her belt, however, she’s become a bona fide sex kitten: Her hair is down, her glasses are off, and she’s traded the day-of-the-week panties for her sister’s Wonder Bra. In '90s women’s magazine parlance, she’s gone from a member of the Sassy sisterhood to a full-blown Cosmo Girl.

It’s a subtle change, and it’s not glaring enough to totally counteract the film’s cheerfully sex-positive agenda, but the message is clear: At the end of the day, all the uptight, prudish feminist needs is some good old-fashioned deep-dicking, so she can finally let loose and enjoy life. It’s a message on par with that of Penthouse fantasy letters or MRA message boards, but it is one that recurs, over and over again, in movies that are ostensibly supposed to promote more progressive views of female sexuality. It’s in "Bachelorette." It’s in "The Proposal." It even briefly pokes its head in the vaunted "Bridesmaids," which ends with Kristen Wiig riding off with hunky patrolman Chris O'Dowd (who, in the film, is essentially the male equivalent of the Manic Pixie Dream Girl).

In "The To-Do List," Brandy Klark quotes that old '70s feminist chestnut, which she attributes (as many do, incorrectly) to Gloria Steinem: “A woman needs a man like a fish needs a bicycle.” But it’s clear that she doesn’t quite believe that, nor do the majority of the heroines in this post-"Bridesmaids" comedy landscape. Because the truth is, nothing is inherently not feminist, not even Cosmo, not even pretty thin white girls, not even getting a pearl necklace. But it’s not inherently feminist, either. And before we start tossing around that term willy-nilly to describe any movie featuring a lady with a tiny waist and a four-letter-word vocabulary, we should probably take a second to consider whether it means what we think it means.