Record number of millennials forced to live at home 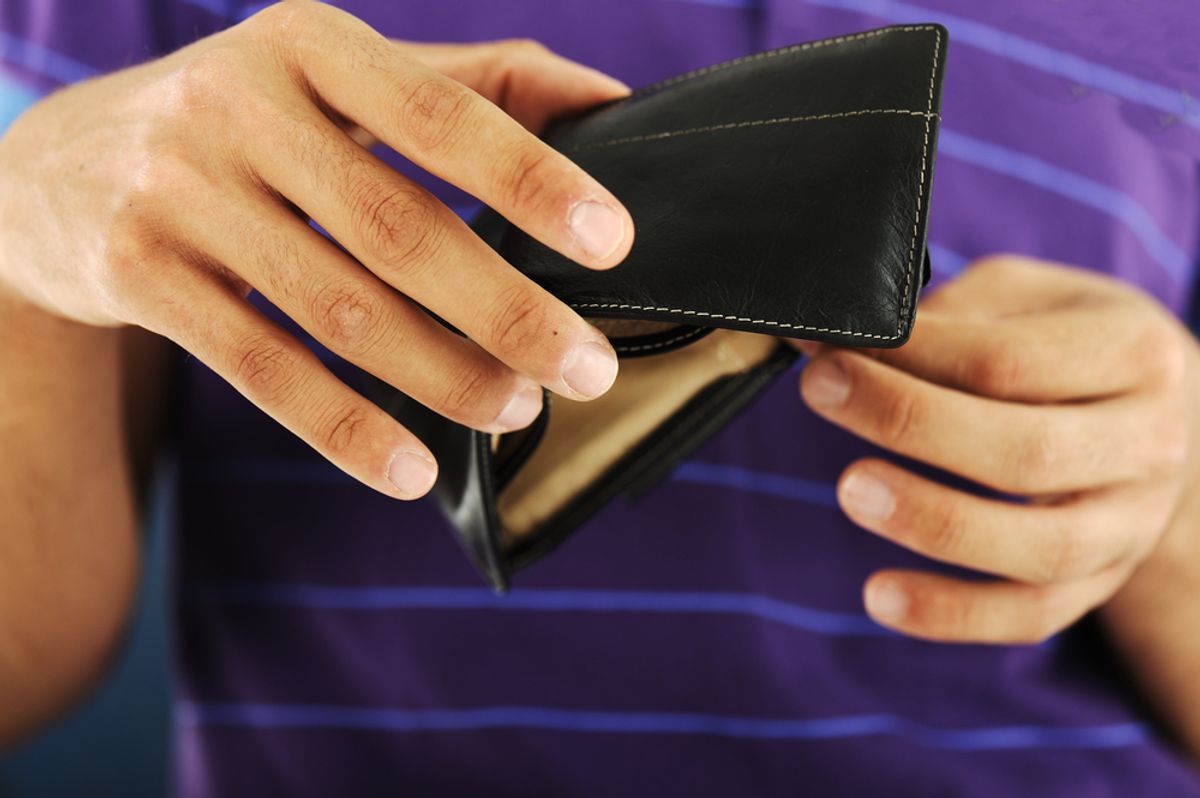 America’s young people have been hit so hard by the crappy economy that they can’t even get out the door. A fresh study from Pew Research reveals that 36 percent of Millennials —young adults ages 18 to 31 — are still living under their parents' roofs (this includes college students who come home for breaks). Not since the 1960s have so many young people resorted to couch surfing with mom and dad, a record 21.6 million young adults last year.

This is a gigantic sign that something is going horribly wrong in our economy—something that will cost everybody.

The Wages of Recession

The U.S. has seen a significant uptick of young people unable to afford to move out on their own since the start of the Great Recession in 2007, when just 32 percent lived with their parents. And if you look beyond college years to the 23-28 range, the number living with parents leapt by more than 25 percent bewteen 2007 and 2011, according to the Census Bureau. Clearly, the ongoing jobs crisis is a major cause: 63 percent of Millennials had jobs in 2012, down from 70 percent in 2007. Young people continue to face a jobs crisis even as the economy improves, as  Catherine Ruetschlin and Tamara Draut of the public policy think tank Demos have found. They are facing a deficit of 4 million jobs, with African Americans and Hispanics worst hit.

Interestingly, according to the Pew poll, it’s the young men who are having the hardest time moving out. Forty percent of young men are currently living at home, compared to just 32 percent of young women. Men suffered the biggest job losses in the financial crisis, but they also gained the most post-recession jobs. There may be cultural factors operating in the fact that more young men stay home, including less expectations that they will contribute to chores or face close supervision.

Even if a young person is lucky enough to have a job, the work may be temporary, part-time and/or poorly compensated. Many young people, particularly those eager to pursue careers in journalism, finance and other highly competitive fields, work as unpaid or underpaid interns, as Ross Perlin documents in his book Intern Nation: How to Earn Nothing and Learn Little in the Brave New Economy. New research reveals that nearly half of graduating college students have done unpaid internships, and only 37 percent of them end up receiving job offers. The numbers of unpaid and paid internships — many of which offer only small stipends — are rising.

Trying to work and pay back student loans at the same time makes coming up with rent a daunting challenge. Student debt, which we already knew was astronomical, quadrupling from just $240 billion in 2003 to more than $1 trillion today, turns out to be even worse than we thought, according to findings from Demos. Two-thirds of seniors leave college with an average of $26,600 in student loans, and the financial burden holds them back in a number of ways. They have trouble saving, and even when they are able to stash away enough money for a mortgage, young people with debt have to pay a higher interest rate than those without it.

Certainly there are cultural differences in the perception of what it means for young adults to be living at home, and some may see extended families living under one roof as a good thing, with individuals sharing resources and support. But the Pew research shows that only 35 percent of Millennials living at home actually pay rent, and 25 percent don't contribute at all to household expenses.

Parents with little to spare have to put off retirement and dig into savings to support children they hoped would land a decent job after graduation. For all the blather about college not being worth the cost, those with a bachelor’s degrees are still in better shape than those with only a high school diploma, according to the Pew poll. Forty percent of those with a high school education or less live with their parents, versus 18 percent of college grads.

In researching this article, I contacted both young people and parents who have adult children living at home. The challenges of continuing to live at home are heartbreaking, not only to individuals, but to entire families. A health problem, a divorce or a pregnancy can send young people who thought they had made it on their own back to their parents’ homes.

Mitch D. is currently looking for a job while living with his parents. He did two years of community college, taking a break from his education due to a serious health crisis, which was covered by Medicaid. Now that he is healthy, Mitch has been kicked off the Medicaid rolls and does not have any insurance. When I asked him how he felt, he wrote to me that he felt hopeful, but his words betrayed a sense of crimped expectations: “I have good people around me and I'll eventually go to a 4 yr college. Just trying to find a menial job for now.”

Victor L.’s 18-year-old son has autism, and is living at home. He landed a job on a paper delivery route and is looking for something better, but as his father put it, they’re seeing “lots of applications to jobs but no hiring." The family is assisted by a good disability program, but finances are still shaky. “We save when we can,” writes Victor, but he is scared about the rising cost of groceries and other expenses.

One young woman told me on Twitter that she is divorced with two kids, and the combination of high rents and low pay has forced her to seek shelter with her parents. Another, Georgette K., explained that she was 25 and just had to move back in with her parents after seven years on her own. The reason? Dead-end minimum wage jobs. Her words capture the pain many young people feel about their situation and the strain on family life:

“I feel hopeless, actually. Our relationship has been strained for many years. Also, I highly value my independence. It's been 8 months now, & I feel like I'm never going to get out on my own again. It's like I'm stuck in a time warp. Feels like I'm 16 all over again...except worse.”

When asked about the phenomenon of adult children living at home, one mom quipped, “They’re supposed to leave?” The child in her house just turned 30.

When young people are stuck living with their parents, the entire economy suffers.

The reasons are numerous. To start with, our bad economy is being driven by low demand; that is, the inability of people to pay for goods and services. When young people don’t form households, they aren’t buying microwaves and TVs. This, in turn, affects businesses, which respond by not hiring workers, or getting rid of current employees.

Unemployed or under-employed young people are a terrible waste of human capital and lower the productive capacity of the nation. When they start their careers late, they tend to have lower wages and greater odds of future joblessness than those who don’t. The lost tax revenues that result spell trouble, as does a greater demand for government-provided services such as healthcare and welfare payments. Bloomberg senior economist Joseph Brusuelas estimates that the youth unemployment crisis may cost the U.S. a staggering $18 billion over the next decade. He calls his estimate “conservative.”

A scarred, anxious generation is in dire need of vigorous government intervention. America’s youth unemployment situation is among the worst of large, wealthy economies, yet the response of the Obama administration to this crisis has been utterly inadequate. Of all economic demons, youth unemployment is one of the simplest to slay from a policy perspective — if there is leadership available to make that happen.

For example, the government could introduce broad job-creation measures focused on getting young people back to work. It could adequately support the kinds of spending that will stimulate job growth. It could focus on public spending as investment that pays off tremendous future dividends rather than a waste of money.

But it hasn’t. Why? Part of the problem is the influence of the faulty economy theory promoted in Washington that serves only the wealthy.

For the better part of three decades, the popular — and completely baseless — “skills mismatch” theory has dominated public policy. This is a blame-the-victim argument promoted by conservative economists and corporate chieftains which holds that there are enough jobs if only young people had the right skills or the right education.

This myth has been repeatedly debunked by researchers as the Wharton School of Finance, the Federal Reserve Bank of Chicago, the University of California-Berkeley, and others (see Peter Cappelli’s “Why Good People Can’t Get Jobs”). The proof is in the numbers: if businesses faced a skills shortage, we'd expect to see wages in some sectors rising rapidly as employers compete for a limited number of workers, but we certainly haven't seen that happening. Yet President Obama has repeated the skills-mismatch nonsense many times over the course of his tenure, including in his 2012 State of the Union speech. Telling young people to just “go get some skills!” is sounding increasingly hollow and cruel in the face of a still-growing crisis.

The Obama administration has also been hampered in its response to the youth jobs crisis by austerity policies based on the discredited theory that debt, rather than lack of demand, is the problem driving a bad economy. Such theories have consumed most of the Republican Party, but many in the Democratic leadership have bought into this economic mythology. Policies which focus on slashing government investment, vital services and often jobs only exacerbate the demand problem and worsen the human catastrophe of unemployment.

The folly of austerity has already played out viciously in Europe and ought to provide a cautionary tale. But despite the fact that the favorite academic research of austerity hawks has been exposed as deeply flawed (the infamous work of Carmen Reinhart and Kenneth Rogoff) the voices of austerity-pushers like Alan Simpson and Erksine Bowles, co-chairmen of the President’s wrong-headed deficit-reduction commission, still echo throughout Washington. The pair recently published an op-ed once again calling for curtailed government investment and cuts to the social safety net — just the sort of thing to drive more young people to desperation.

Eventually, the failure to address the catastrophic situation facing young people leads to social unrest. When young adults have tried hard to get work, but find instead not only a lack of jobs, but an array of useless or bought politicians and greedy bankers set against them, they begin to experience rage. This has been observed all over the world, from the Arab Spring to the Occupy movement. When young people have nothing left to lose, they start to lose it.

Lynn Parramore is an AlterNet senior editor. She is cofounder of Recessionwire, founding editor of New Deal 2.0, and author of 'Reading the Sphinx: Ancient Egypt in Nineteenth-Century Literary Culture.' She received her Ph.d in English and Cultural Theory from NYU, where she has taught essay writing and semiotics. She is the Director of AlterNet's New Economic Dialogue Project. Follow her on Twitter @LynnParramore.