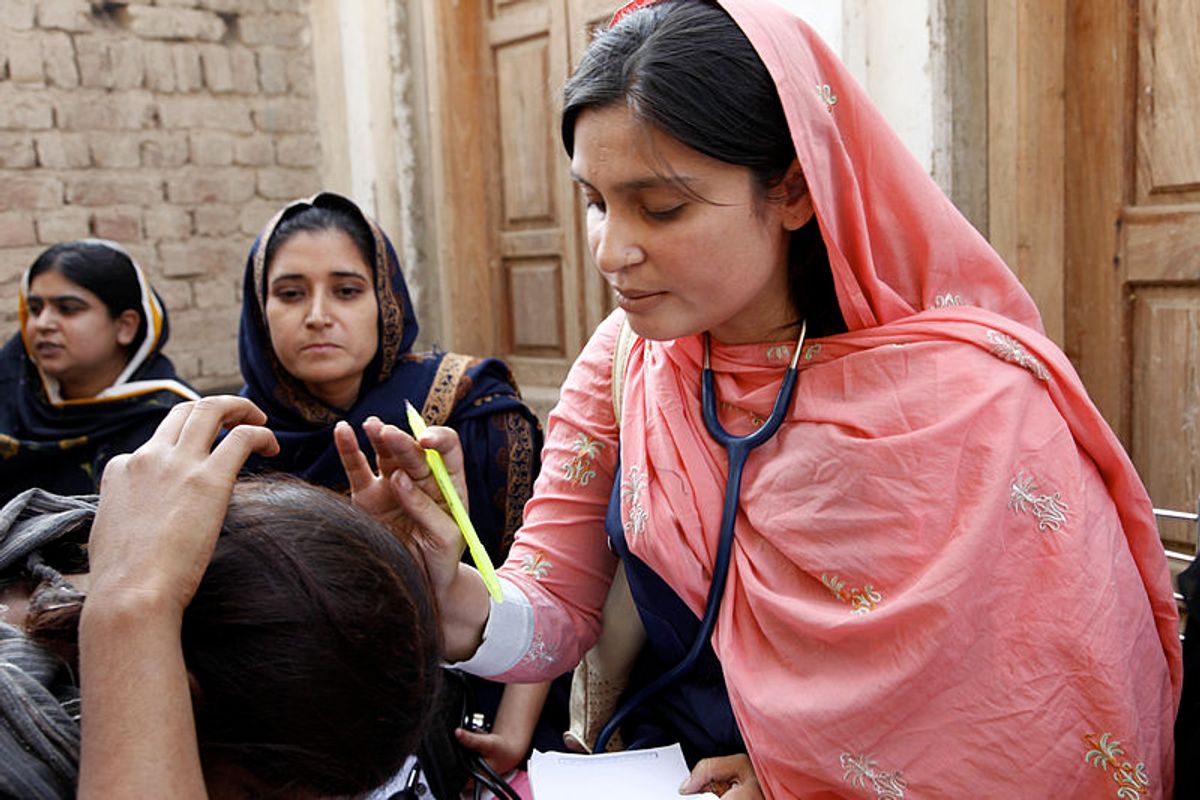 Pakistan’s largest city and commercial center, Karachi, is a city of extremes where the richest live alongside the country’s poorest. Perfectly coiffed women with foreign degrees and fancy handbags tour around the city’s designer malls. At the other end of the spectrum, a range of hurdles leave women from the poorest sections of society struggling to access basic services, particularly healthcare.

But a recently launched telehealth service is hoping to change that by giving women in Karachi, Pakistan’s largest city with a population of around 18 million, access to basic health advice for free from a mobile phone.

“This is a big opportunity to improve access to woman in urban areas who have no access to basic healthcare and information, particularly during pregnancy,” says Zahid Ali Faheem, head of the telehealth service run by the Aman Foundation, a Pakistan-based nongovernmental organization. Dr. Faheem oversees the 26-seat call center that has been working around the clock for the past 18 months.

According to the World Health Organization’s Global Health Observatory report, 40 percent of premature deaths in adults in Pakistan would have been preventable through early intervention. Though there is no official WHO breakdown by gender, experts say a significant portion of those premature deaths are women. Distance to hospitals and clinics, the cost of transport, and low levels of trust in government-run services leaves men and women unable to seek the medical help they may need.

A strict social code for many women presents an additional obstacle. Low literacy rates – 57 percent of women are illiterate in Pakistan compared with 26 percent of men – and a lack of basic health knowledge compound the problem.

When women are able to travel to a clinic or hospital, they are usually accompanied by a male relative, leaving many unwilling – or unable – to explain their medical problem to the doctor.

“Women don’t want to get healthcare services without their [male relative] presence,” explains Faheem, “But she cannot say anything when she goes to the facilities. The head of the family does all the talking.”

Aman Foundation's telehealth service is the first of its kind in Pakistan, though similar services have been running in India for a few years. The call center is structured in the same way as the Indian service, though it is currently operating on a much smaller scale, and is funded through a private trust that underpins all of the Aman Foundation’s programs. It capitalizes on the country’s booming mobile phone market, the fifth largest in South Asia.

The call center receives around 400 calls per day. The majority of the calls are from Karachi where the Aman Foundation is well known thanks to a range of educational and health services it provides. But people from the rest of the country can use the service as well.

But gender roles are deeply embedded in society and a hurdle to the project is the fact that only 12 percent of calls to the Karachi call center are women.  Although 63 percent of Pakistanis have a mobile phone, the majority of users are men.

However, Faheem says the service has not yet been marketed, and anticipates that the call volume will soar once the awareness campaign, planned for the coming month, is launched.

Lubna, who lives down a narrow potholed ally in Karachi, says she heard about the service from a neighbor. Social pressure, she says finally drove her to try the service: She says she didn’t want her neighbors to know that she needed medical help. “Then they start saying, 'What is wrong with that woman?'” she says. Lubna also says she didn’t want to leave the house to seek medical help because that would mean leaving her four daughters at home alone, which she believes isn’t safe.

Private initiatives like the Aman Foundation’s telehealth program play an important role in providing services that the cash-strapped government is unable to provide, says Zohra Yousef, chairperson of the Human Rights Commission of Pakistan, a Pakistan-based advocacy group.

“Women don’t have decision-making authority over their bodies. That has to come through policy changes. In terms of policy there have been positive changes in recent years, but they have primarily been [international] donor driven," says Yousef. “These initiatives can only go so far while these attitudes remain.”