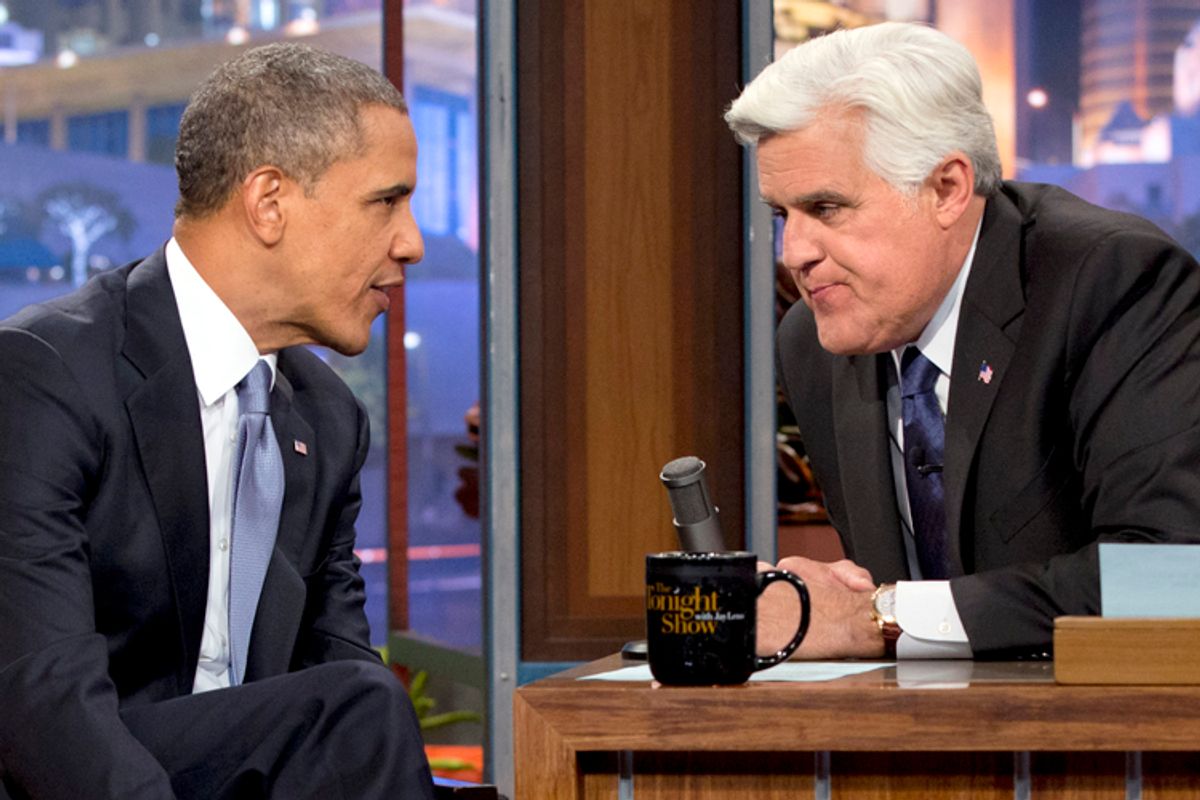 Barack Obama talks with Jay Leno during the taping of his appearance on "The Tonight Show with Jay Leno" on Aug. 6, 2013. (AP/Jacquelyn Martin)
--

Did you hear? Obama gaffed -- hard. During his interview with Jay Leno Tuesday night, Obama made what Glenn Beck called a “staggering geographical gaffe" when he said we need to deepen "our ports all along the Gulf -- in places like Charleston, South Carolina, or Savannah, Georgia, or Jacksonville, Florida." But those ports are on the Atlantic, not the Gulf Coast! Dust off the articles of impeachment! (Never mind that they serve the Gulf, even if they aren't actually on it.)

But that's not all. In fact, Obama "delivered one gaffe after another," as Newsbusters' Geoffrey Dickens explained. The other gaffes included, according to Dickens: "downplaying the threat of terrorism; falsely claiming Vladimir Putin once ran the KGB ... confusing the Winter Olympics with the Summer Olympics."

Obviously, this is very big news on the conservative blogosphere.

And since we're talking about people like Michelle Malkin, there are also attendant conspiracy theories, like claiming that "lapdogs at AP dutifully bur[ried] Obama’s geography gaffe," by adding a parenthetical to Obama's quote that doesn't actually make his statement any less wrong. In fact, the entire mainstream media is in on the cabal to hide Obama's devastating gaffes from the public.

The problem is that none of these are really gaffes. A political gaffe, in the classic sense as coined by columnist Michael Kinsley, "is when a politician tells the truth -- some obvious truth he isn't supposed to say." In other words, a misstatement only rises to the level of a gaffe when it exposes some part of a politician he or she doesn't want us to see, or, more cynically, when political opponents can use it to confirm a narrative that previously exists about the speaker.

The narrative here would seem to be that Obama is dumb and doesn't even know basic geography. But no one really believes that and even Obama's most ardent critics have never questioned his intelligence. Instead of the hapless dunce in the mold of liberals' anti-Bush caricatures, conservatives see Obama as a conniving radical. Or an out-of-touch, former law professor, ivory tower elitist. Either way, not dumb. Ted Cruz said today that he modeled his campaign after Obama's because it was so smart and effective.

Meanwhile, "downplaying the threat of terrorism" is plainly not a gaffe -- it's an assessment of the world that is different from how conservatives would see it. On the Olympics, Obama said, "if Russia wants to uphold the Olympic spirit, then every judgment should be made on the track, or in the swimming pool, or on the balance beam." As Newsbusters nails him: "The track and field events, swimming competitions and gymnastics all take place during the summer games. Sochi, Russia is the site of the 2014 Winter Olympics." BOOM! Nailed him.

More troubling is that Obama said Putin "headed up the KGB." It's a common misconception, but in fact the Russian president only rose to the rank of lieutenant colonel before retiring from the spy agency to enter politics. That maybe suggests a lack of a specific bit of knowledge vaguely relevant to an important foreign policy issue, but it's still not really a political gaffe.

As Tommy Christopher writes, "Another reason that gaffes don’t stick to this president is that, fair or not, they don’t fit an established narrative for him. When John McCain refers to 'Czechoslovakia,' it’s funny because he’s old, and when Sarah Palin says North Korea is our ally, it’s funny because of her overbearing jingoism and perceived dimness. When then-Senator Obama groused about the price of arugula in 2007, that was funny [because he's an elite cosmopolitain]." But the Leno stuff is neither funny nor confirmatory of an existing narrative.

Mitt Romney's gaffes on the campaign -- from the 47 percent tape, to "I like being able to fire people," to "corporations are people" -- exposed a country club side of him that everyone already assumed was there. George Allen's "Macaca moment," the ur-gaffe of the Internet age, dredged up questions about race and the fact that he kept a noose and a Confederate flag in his office. Todd Akin's "legitimate rape" comment exposed his radical views and history.

"But for some reason," Taranto continues, "the World's Greatest Orator and the most powerful man in the world is held to lower standards of verbal exactitude than a lowly congressman from Missouri." No one gave a shit about Todd Akin's "verbal exactitude" -- they cared about the worldview and policy prescription his words exposed.

It's also worth nothing that his whole debate is pointless because gaffes actually don't really matter to voters at all.