Bob Odenkirk: "I still find a lot of humor" in "Breaking Bad"

The actor, also in "The Spectacular Now," talks to Salon about how his father's alcoholism informed his acting 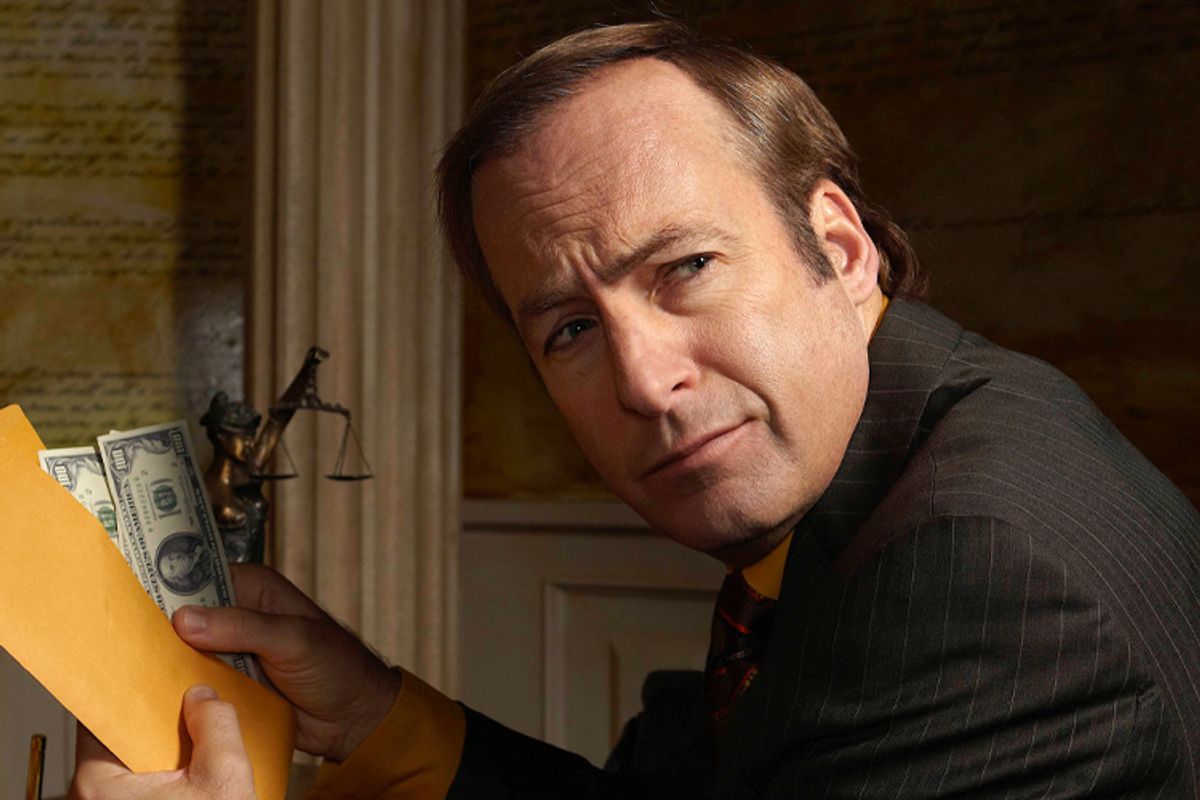 Bob Odenkirk has had a serious year.

The actor, who will continue his role as corrupt lawyer Saul Goodman in "Breaking Bad" when the AMC series returns Aug. 11, is currently on the big screen in "The Spectacular Now," a carefully drawn portrait of a teen alcoholic (Miles Teller) who falls in love with a more pragmatic high school classmate (Shailene Woodley). Salon's Andrew O'Hehir called the film a "memorable, imperfect, heartbreaking summer love story, a bit soapy in spots but loaded with power and feeling."

Odenkirk plays the teen's boss at a menswear store, a man who spends more time with Teller's character than his distracted mother or deadbeat dad. By year's end, Odenkirk will be on-screen again in "Nebraska," Alexander Payne's black-and-white follow-up to "The Descendants." So much for the easy-to-enrage comic we all remember from "Mr. Show."

Odenkirk attributes his interest in "The Spectacular Now" -- not in any overt way a "funny" project -- to his own personal history with substance abuse; his father was an alcoholic, something that may have, if subliminally, influenced his choice of career. "Comedy to me is about honesty," Odenkirk told Salon. "And maybe my yearning for that comes from growing up in a house with so many secrets."

Between this film, "Nebraska" and "Breaking Bad," it seems like your career's taken a darker turn. Are you trying to move away from comedy?

Well, if it is, I'm ruining it by making a 10-episode show for IFC called "The Birthday Boys." That's pure sketch comedy that's broad and fun and silly. [With Ben Stiller, Odenkirk is an executive producer.] It's not a conscious choice, but what's conscious about it -- as much as I love sketch comedy, I probably belong in a more dramatic scenario than I do in a broadly comic scenario because of the energy I have on-screen. I haven't pursued drama, myself. But I thought I might be more impactful if I was put into this kind of venue -- at least semi-dramatic, if not wholly dramatic. On a sketch comedy stage, I'd find myself standing next to Chris Farley or David Cross, these are incredible, juicy performers who make you smile just with their presence. Their presence is a grin. I was never in that category. But I've auditioned for all the Alexander Payne films; he's been interested in me. Vince Gilligan putting me on "Breaking Bad" made it more possible for people to consider me in a dramatic format. I do think it's really rewarding for me as a performer. But I want to make clear, I have a strong connection to this film.

Tell me more about that.

My father was an alcoholic. I'll be blunt about it. It was something my family had to deal with our whole lives. That alone was something that struck me on a deeper chord. But I've had a couple alcoholics in my life and I've had to give a version of that speech that I give in the movie where I ask somebody to examine their relationship to the bottle. It's a touchy subject and it's something I've had in my life, and I felt deeply for the character and the situation and the situation of the owner of the shop wanting to save this kid.

Were you moved to perform by this situation in your childhood?

I don't think so. My brother Bill is a comedy writer [for "The Simpsons" and "Futurama"] and I'm more of a performer and writer, and my dad, who had a drinking problem, was a very funny guy. That had more to do with his nature; his presence and his energy have more to do with me being a performer [than his alcoholism does]. People love to hear me say "God damn it!" And that's my dad saying, "God damn it!" right there. I think that as opposed to working against whatever challenges we had, the real motivation is just the natural energy and sense of humor that my father and mother gave to me and my brothers and sisters. They're funny as well.

Your question's a good one. Some performers want love from parents who ignored them. We performed in the house all the time and made each other laugh. The tension in the house may have caused us to be a little more extroverted and funny. If family issues had anything to do with what I'm doing, it's the fact that for years I didn't know what was going on and I could tell something was wrong. I could tell for years things were wrong and I didn't know why. When I found out ...  There's an element of me that wants to say what I really feel and say what's going on right now and not be gentle about it or mask it. Comedy comes from that. Comedy, I told my daughter, is about honesty. It's about saying what you think. And people laugh. People understand your point of view and they kind of agree. They may not wholly agree, but they need that release of pretense, of pretending everything's OK. Comedy to me is about honesty. And maybe my yearning for that comes from growing up in a house with so many secrets.

Your "Mr. Show" costar David Cross has been very open about his willingness to do projects for paychecks. [Earlier this year, Cross told Salon, "With 'Mr. Show,' we didn’t make any money. We didn’t see a penny from DVD sales or any of that shit. The big movies that were lucrative, 'Scary Movie 2' and 'Small Soldiers' and 'Alvin and the Chipmunks': I didn’t do them for the love of cinema."] Do you see yourself as less of a "sellout"? And has it been for lack of opportunity?

The whole notion of selling out becomes very, very murky as you get older, as your opportunities increase and as your responsibilities change. Me talking about selling out now, at 50, versus talking about it at 25 are two different things. I have, very much, a sense of wanting to do projects that matter to me and [that I] feel good about and would condone. Yes, I would want you to see me as the guy who did that.

This is a business, and over the years, you get even more aware that everything you do is there to wave in front of people so you can put a commercial in front of them. It's all merchandise. Those commercials are paying for us doing this. I've done things just for money. I've been in financial straits where I've had to. I have a family, I have a house, and I did Miller beer commercials because they paid very well. I don't think David and I disagree that given the choice, I'd rather do work that I can endorse every aspect of. But we all get into that crunch place.

Some things are in between. Some things are a commercial venture that can increase your ability to do things you love. I tell you this -- I continue to do work that I love. Work that you love pays you in so many ways beyond financial remuneration. We also have to pay those bills. To even be in a project that has a greater audience, even if it's not your favorite project to do, it helps you do your work. You become more well-known. And that even matters to people in the independent film world. David's making an independent film now. And his appearance in the "Chipmunks" movie, I feel certain, the fame quotient of that is helping him make this new movie.

Do you think you'll ever reunite with David on-screen?

Do you find any humor in "Breaking Bad"?

You know, it's funny, your attitude when you watch the show, whether you see it as the most bleak, horrifying scenario ever invented or a dark scenario filled with humor. It depends on how you approach it -- literally episode to episode. I still find a lot of humor in it -- but for Saul's character, that world has gotten much, much darker and fraught with far more danger. There's fewer wisecracks.