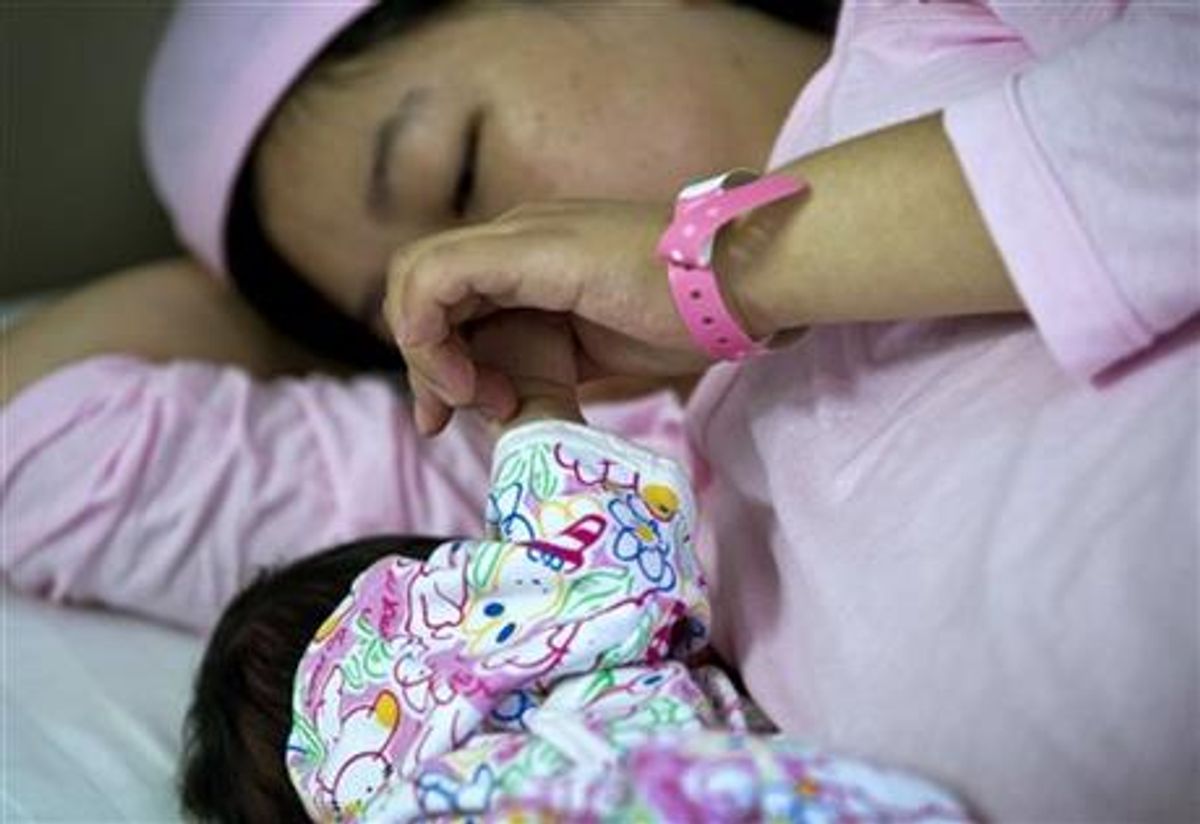 In this Wednesday, Aug. 7, 2013 photo, Chinese new mother Qi Wenjuan holds her 1-day-old son's hand while breastfeeding him at Tiantan Hospital’s maternity ward in Beijing, China. China’s rates of breastfeeding are among the world’s lowest. But health workers and the government are trying to revive the tradition, and a drumbeat of safety scares over commercially produced milk is giving them new leverage. (AP Photo/Andy Wong)
--

BEIJING (AP) — With her 1-day-old son propped against her in a hospital bed nursing, Qi Wenjuan says she has no desire to feed her child with infant formula.

"I don't trust baby formula," the first-time mother said, lying in the maternity ward of Beijing's Tiantan Hospital. "There are too many quality problems."

Qi, however, is in the minority in China, where most newborns are fed — sometimes exclusively — with infant formula within the first six months of their lives.

China's rates of breast-feeding are among the world's lowest. But health workers and the government are trying to revive the practice, and a drumbeat of safety scares over commercially produced milk is giving them new leverage. Visitors to Internet forums for new parents are posting comments about the benefits of breast-feeding and the potential hazards with formula.

"The risks of formula feeding are increasingly clear to the Chinese public," Dr. Robert Scherpbier, chief of health and nutrition for UNICEF China, said in an email this week. His comment came after China's government ordered a recall of formula imported from New Zealand because of contamination fears.

"How many infant formula crises do we still need to convince mothers and policy makers that breast is best?" Scherpbier said.

Only about 28 percent of Chinese infants younger than 6 months are breast-fed exclusively, well below the global average of about 40 percent, according to UNICEF China.

China's Cabinet has announced a goal of raising that to at least 50 percent by 2020. Official initiatives include a joint effort by UNICEF and the government's National Center for Women's and Children's Health to encourage Chinese employers to add rooms for new mothers to breast-feed in hopes of encouraging the practice.

"Breast-feeding is safe, universally available and free," Scherpbier said. "So there is no reason why mothers should use infant formula when they can breast-feed."

Health experts say breast-feeding is the best source of nutrition for newborns, increasing babies' immune systems and reducing their chances of obesity in adulthood. They also say breast-fed children have higher IQs and are less likely to have chronic diseases such as diabetes.

Breast-feeding rates in China began to drop in the 1970s with the introduction of baby formula and hit a low in the '80s, according to a study by Dr. Colin Binns of Australia's Curtin University and his Chinese colleagues published in the International Breastfeeding Journal in 2009.

China's exclusive breast-feeding rates might have declined in recent years, Scherpbier said. However, data that would make the trend clear are not available.

Many Chinese workplaces give new mothers no way to nurse. Urban mothers usually get no more than four months of maternity leave. Women from the countryside who move to the city to work leave babies with grandparents who have no choice but to use powdered formula.

Tiantan Hospital encourages breast-feeding by putting mothers and their newborns in the same room instead of putting infants in a nursery. The nurses' station has pamphlets promoting breast-feeding, and diagrams on the walls of patient rooms show postures for nursing. Each morning, nurses using dolls show mothers how to breast-feed in one-on-one sessions.

"No mother can get it right on their first try, so our nurses always adjust postures by hand to make sure they do it right," Yang said.

A report this year by Save the Children, a British charity, said 40 percent of the Chinese mothers it interviewed had been contacted directly by salespeople for baby food companies.

Rising rates of obesity among Chinese children also might be linked to use of infant formula, said Binns.

"They are bombarded with baby formula ads, and the mothers want the best for their children," he said.

China's infant formula market has grown from about $1 billion in 2002 to $9 billion this year, according to UNICEF. That is forecast to rise to $13 billion by 2015.

Parents who could afford it switched to more expensive imported formula after six babies died in 2008 and thousands were sickened due to Chinese-produced milk that was tainted with the industrial chemical melamine.

But confidence in foreign supplies was shaken this week after Beijing ordered a recall of formula from Fonterra Co-operative Group after the New Zealand supplier said it might be tainted with bacteria that can cause botulism.

The recall has sent shockwaves through New Zealand. The dairy industry is a key part of the country's economy, and China is its biggest milk export market.

Use of wet nurses — women who breast-feed other families' children — also is on the rise. These women are sought out by young mothers who don't want to use formula but cannot produce enough milk of their own or worry about the impact of nursing on their figures.

"It's been growing at 20 percent every year," said Jia Xixian, an agent in the southern Chinese city of Shenzhen who helps clients find wet nurses.

In Beijing, Qi breast-fed her baby for the first time shortly after birth.

"I let him find the nipple, and he found it instinctively," Qi recalled. "There was a little pain, but I could take it. It was an oddly nice feeling, and all of a sudden I felt like a mother and that I could not be separated from the child."

A tiny bolster propped up the newborn as Qi described what she saw as other benefits of breast-feeding: It saves money and will help her recover from childbirth, and she believes it will help the baby to grow better.

But Qi, an intensive care nurse at the same hospital, worries about what will happen when she returns to work about four months from now.

"I think it will be more troublesome to feed him after that," Qi said.