Does Kickstarter have a beef with scientists? 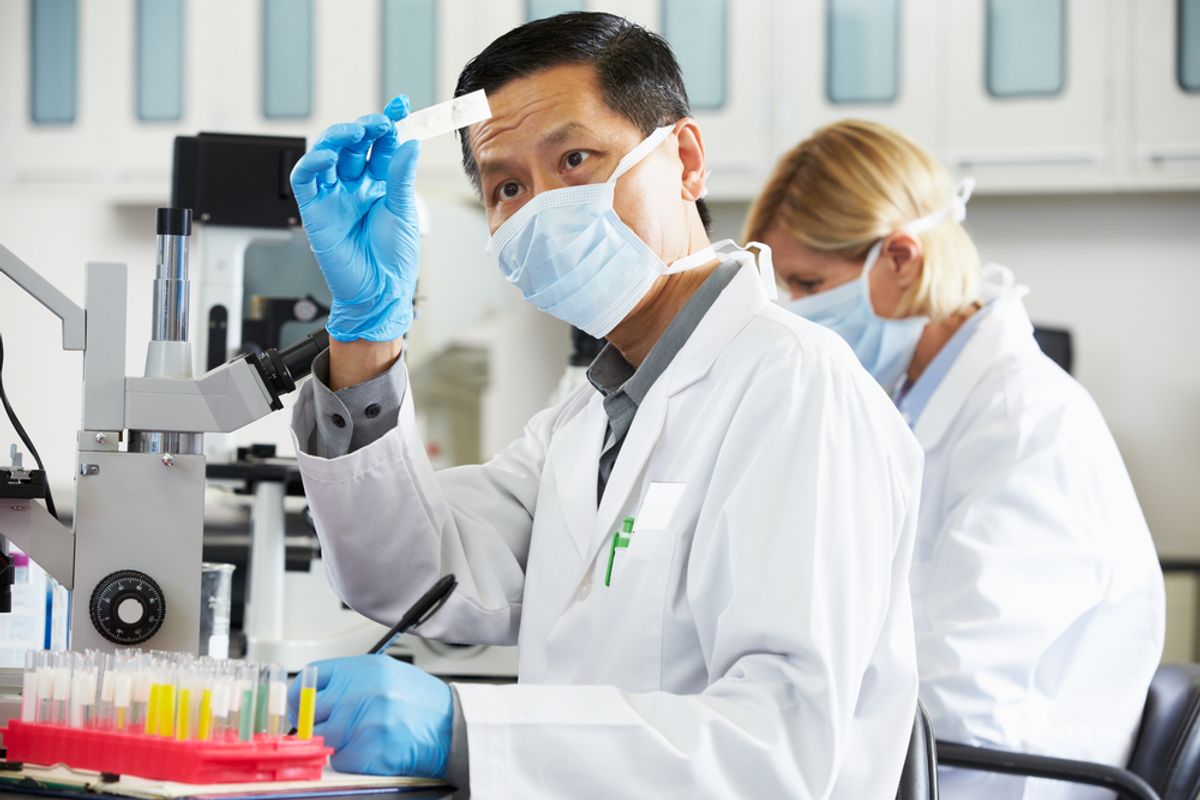 On July 31, Kickstarter updated its guidelines to include this sentence: "Projects cannot offer genetically modified organisms as a reward." That seems like a small and specific ban, but there's a lot more going on here than that suggests: this is about the future of science funding, the future of agriculture, of bedroom experimentation and synthetic biology and the impact of all of that on nature. And it's about whether Kickstarter has a problem with science.

Here's how this all started. On April 23rd, a three-person (with some help) team from Singularity University, a research facility within NASA's Silicon Valley campus, posted a Kickstarter for the Glowing Plant project, asking for $65,000 in the period ending June 7th. The project aims to, in the creators' words (and with the creators' emphasis), "Create GLOWING PLANTS using synthetic biology and Genome Compiler's software - the first step in creating sustainable natural lighting." They are, as you might have guessed, genetically modified plants that glow in the dark. As with many Kickstarter projects, those who pledged a certain amount of money would receive the result of the project--in this case, a packet of seeds to grow their own glowing plants. On May 23rd, a petition was posted on Avaaz, a petition-hosting site, that asked Kickstarter "not to allow bioengineered organisms." It garnered nearly 14,000 signatures. And then, nearly two months after the funding period ended (to great success, earning over $484,000), Kickstarter quietly posted that update banning GMOs as a reward.
The Glowing Plants project wasn't in violation of any rules when it was listed; Kickstarter changed the rules to create a stumbling block after it had already garnered attention. What's going on?

The Glowing Plants project creators weren't informed by Kickstarter that their project had inspired a kerfuffle and a rule change; a backer noticed the change and shot them an email, "which is a bit disappointing, frankly," says Antony Evans, one of the creators. And he's not pleased that Kickstarter bowed to pressure from this sort of activist. "If you read some of the things that anti-GMO people say about our project," says Evans, "they're ludicrous. There's an article that says our plants will lead to twisted plants that are intelligent and will attack people. It's just insane." He says the studies that show connections between GMOs and cancer are "ridiculous" from a scientific perspective, and that he's "not aware of any study anywhere than shows any negative effect at all on people who have eaten GMO." He further describes the anti-GMO activism as "a lot of, frankly, bullshit and fearmongering." But that doesn't mean he thinks the controversy is unfounded. "It's an advanced technology and it's important to be prudent and cautious about it," he says.

The Glowing Plants project is doing "a lot of tests," says Evans, and in fact the original pitch for the project includes creating an "open policy framework" that would help future projects navigate regulations as well as mounting a campaign to recommend superior legislation.

Kickstarter says that synthetic biology is "the subject of widespread debate" and that "scientists have the benefit of time for a consensus to emerge." But Kickstarter is shying away from providing the revenue and arena for scientists to come to that very consensus! The new rule takes power away from the public and leaves it in the hands of giant corporations like Monsanto to develop, test, and own GMOs.

Kickstarter has several rules, laid out in plain but vague language, that prohibit the listing of certain types of projects. No social networking or e-commerce. No causes (like "pay for my college"). No real estate (like "let's buy a private island").
When it comes to a project that isn't obviously illegal but which is controversial or in some other way undesirable for Kickstarter, the staff gets together and discusses what to do. "To better understand the debate, we reached out to a few scientists, researchers, and others in the biohacking world for their perspective," said Yancey Strickler, cofounder of Kickstarter, to The Verge. (Kickstarter declined to speak with Popular Science on the record.) And then the Kickstarter staff makes the call.

Soon after he became aware of Kickstarter's new policy, Antony Evans posted his own petition to "Ask Kickstarter to allow Genetically Modified Organisms as rewards." Many users on Reddit, Twitter, and the comments sections of newsposts about the ban shouted in support, seeing the ban as repression of science. In that same interview with The Verge, Yancey Strickler said: "Kickstarter is a funding platform for artistic and creative projects. While we love science and have had some amazing science-related projects, this is an evolving debate in an area outside of our core focus."

Indiegogo, the Mr. Pibb to Kickstarter's Dr Pepper, has a much different view of what is and is not a candidate for crowdfunding. Indiegogo's rules are more brief but otherwise similar to Kickstarter's: nothing illegal, nothing pornographic, nothing hateful, nothing in the financial industry. But there are no limitations on its "perks," the Indiegogo word for rewards, other than "All Perks must be lawful." Indiegogo isn't trying to direct the type of project at all; Rose Levy, a spokesperson for Indiegogo, told me that "pretty much anything that's not illegal and that doesn't violate the terms of service" is permitted. "There's no application process," she says. "There's not a gatekeeper at the door deciding what goes in and what comes out." She says it's up to "the platform" to decide what's appropriate and what's not; the Indiegogo perspective is that anything objectively "bad" will simply not get funding, and be weeded out that way. That ignores the possibility for something that's divisive, that some people like and some do not. It also ignores that Indiegogo allows partial funding. Unlike at Kickstarter, you don't need to fulfill your stated goal to get paid--you can just get whatever funds were given. Suffice to say that Indiegogo would allow the Glowing Plants project to give out seeds, no questions asked.

Kickstarter may think their mild stance against genetic modification isn't a big deal. They're not banning GMO projects outright, after all, just trying to brush them aside. If Kickstarter is concerned about the possibilities of genetic modification, it's counterproductive to attempt to discourage the little guys from using the easiest, biggest funding platform on the internet. Genetic modification has long been the purview of massive corporations like Monsanto and major research institutions like universities. The equipment and labor needed to perform the testing and actual gene manipulation is very expensive, so small groups and individuals haven't really had access to it before. That leaves genetic manipulation in the hands of either research institutions, hidden away where we can't see them, or corporations that have a significant control over our food supply and whose business practices garner deserved criticism. Monsanto doesn't need Kickstarter. These small research teams do.

What other scientific research will prove too controversial for Kickstarter? Stem cells? Vaccines?

Deciding whether distribution of GMOs is safe is a tremendously complicated and difficult scientific question. Is it safe for someone in New York or California or Argentina or Kenya to plant a glowing plant in the backyard? What happens to the surrounding ecosystem? "In all ways that matter," says Daniel Grushkin, a journalist and co-founder of Genspace, a biotech startup that bills itself as "New York City's community Biolab," "it's just like introducing any foreign species." It takes an outrageous amount of work, creating models and running scenarios, to figure out even just our best guess as to the effect of introducing a new species. Doesn't matter if you're introducing a European plant to North America or a genetically modified plant that was created in a lab in your town: any new species is going to have an effect, and there's currently no legislation that competently regulates that. How small of an effect should a new species have? Where's the line between acceptable and unacceptable? We don't know.

The Glowing Plant project creators, for their part, say that the particular plant they're working with, Arabidopsis, is non-invasive. Arabidopsis is in the brassica family, related to broccoli and kale (and cabbage and mustard and about a thousand other tasty things), and was the first plant to have its genome sequenced. Thale cress, Arabidopsis thaliana, is one of the most commonly used organisms in genetics. It's very well understood, and Antony Evans objected a bit to the idea that this genus is completely unknown. But he allowed that it did need more testing--and that his team needs the Kickstarter funding to do that testing.

Kickstarter's response to the problem of genetic modification seems like a compromise, a way to discourage this sort of science while remaining unwilling to be the bad guy and boot the project completely off the site. Nobody I talked to suggested that it's crazy to want to limit the amount of unregulated genetically modified organisms out there, and it does limit the appeal of funding a project if you can't actually get (or grow) the results. "I would have thought that a) they could have told us and b) they could even have consulted us on this," says Evans.

The impulse to simply slap up rules absolutely creates a hostile environment for science. Kickstarter's concern over GMOs isn't entirely unfounded, but it's important to note that glowing plants are fully legal, and that Kickstarter only banned them due to controversy on the internet. Who knows what kind of other scientific research will prove a bit too controversial for Kickstarter's comfort? Stem cells? Vaccines?
The attitude Kickstarter is espousing should lead those looking to fund scientific research elsewhere--to Indiegogo or "Kickstarter for science" crowdfunding sites like PetriDish and Microryza. Future GMO projects "won't list with Kickstarter," says Antony Evans. "There are other, more open platforms that people can choose in the future." But those platforms are smaller; according to this report, only one in ten Indiegogo projects achieve their funding goals, compared to 44 percent for Kickstarter. Going to a Kickstarter rival, at least for the moment, means a smaller audience and a smaller potential funding base.

Kickstarter has much more power than it realizes. It can assist in the shaping of a major scientific revolution. Instead of quietly discouraging the project, what if Kickstarter gave more in-depth instructions? What if the guidelines required significant testing to assure a genetically modified organism would have no adverse effect on an ecosystem? Kickstarter could be the venue through which small, passionate researchers can actually compete with giant agricultural companies that are allowed, through enormous revenue and government influence, to do whatever they want. Kickstarter is backing away slowly and nervously from the debate. It's not their specialty, and they don't really understand it, and they don't want to stick their necks out. But they have an opportunity to do some amazing stuff, and slowly backing away could have a much more devastating effect than they know.