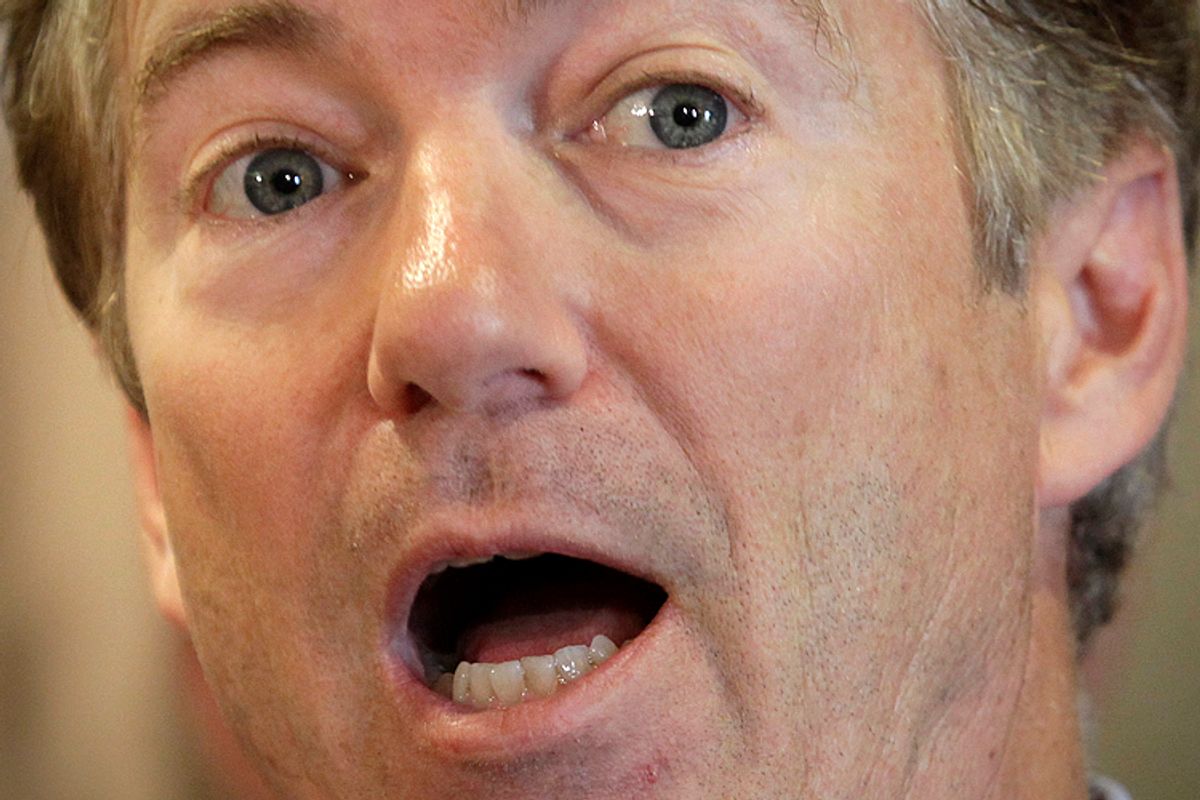 If nothing else, I usually give Kentucky Sen. Rand Paul credit for boldness. But in a publicity barrage this week, the man who’s almost certainly running for president this week behaved more like Mitt Romney than Romney’s two-time rival Ron Paul, Rand’s dad.

We saw Deceptive Paul in an answer to a question from Bloomberg’s Joshua Green about how he’d cut the federal budget. He compared his cuts to “the Penny Plan, which cuts 1 percent a year for five or six years and balances the budget. Many Americans who have suffered during a recession have had to cut their spending 1 percent, and they didn't like doing it, but they were able to do it to get their family's finances back in order. I see no reason why government can't cut 1 percent of its spending."

Maybe it can, maybe it can’t – but that’s not what Paul is proposing. As Ezra Klein points out, Paul’s budget eliminates the Departments of Commerce, Education. Housing and Urban Development, and Energy, and cuts the State Department budget by more than 50 percent. Maybe, like Rick Perry, Paul couldn’t remember all the agencies he wanted to cut. More likely, he’s doing the GOP shuffle, hiding his stands that are unpopular with voters.

Green did bring out Wingnut Paul once, by asking him whom he’d pick for Fed chair. “Hayek would be good,” he joked, referring to the father of Austrian economics, “but he’s deceased … [Milton] Friedman would probably be pretty good, too, and he’s not an Austrian, but he would be better than what we have.” When Green pointed out Friedman is dead, too, Paul deadpanned, “Yeah. Let’s just go with dead, because then you probably really wouldn’t have much of a functioning Federal Reserve.” Sounds like his old man!

We saw Prickly Paul when he was interviewed on NPR Wednesday by CNBC's John Harwood, who asked him about his former staffer, the neo-Confederate Jack Hunter. He blasted Harwood for not wanting "an intelligent discussion."

When the host quoted the Economist describing "racist and nativist" elements within libertarian politics, Paul said, "Don't you have something better to read than a bunch of crap from people who don't like me? I mean that won't make for much of an interview if I have to sit through reading after recitation of people calling me a racist."

Paul added, in reference to Hunter, "If you look at his writings, there are a lot of problems and a lot of disagreements, and none of it do I support, but none of it was racist." That’s rich: Paul is now the judge of what’s racist. But wait, there’s more. Not only is he the best judge of what’s racist, he’s the best defender of minority rights, too.

"There is no greater defender, truly, of minority rights, if you consider minorities to be the color of your skin or the color of your ideology, than myself," he told Harwood. "I will stand up there with the most progressive members of the caucus."

Then he went the full Reince Priebus, accusing ABC News’ George Stephanopoulos of manufacturing the GOP war on women because he asked Mitt Romney if he supported the Supreme Court’s Griswold v. Connecticut decision legalizing birth control. “You can look back to the last primary season and you wonder whether there was collusion between some reporters,” he told Geraldo Rivera.

“You know, Stephanopoulos asks an obscure question about Griswold and birth control when no Republicans were bringing up anything about trying to put limits on birth control … I’m in favor of the Griswold decision because I am in favor of privacy. But the thing is, it was a weird thing to bring up in a debate, and nobody understood why. But then for two years, the president’s campaign then ran ads saying that the Republicans were against people allowing birth control. So you wonder if there was a concerted action between a former Democrat operative and basically the president’s campaign."

Rivera challenged him: “Are you alleging that George Stephanopoulos was a Democrat plant during the debate?”

“I’m saying that there, it makes you wonder, and he’s also said publicly that he has frequent correspondence with his friends who are still involved with the White House. So the question is, are you going to get a fair shake, and I think it’s a reasonable question for Republicans to ask.”

In fact, Rick Santorum had already been talking about contraception, and insisting Griswold had been wrongly decided, on the campaign trail.  So I’m not sure if that was Crackpot Paul or Lying Paul. You be the judge.

Whether it helped him or not, Paul’s star turn with major national reporters this week is the clearest evidence yet that he’s planning a 2016 presidential run. What’s also clear is that he hasn’t decided whether he’s going to run as the far-right extremist that he is, or whether he’s going to try to tone down or simply hide his less popular stands. Since his appeal with the Tea Party base lies not only in his extremism but in his candor about it, the latter would seem a risky strategy.  He'll have plenty of competition to his right if he stumbles. You know how Tailgunner Ted Cruz feels about "squishes."