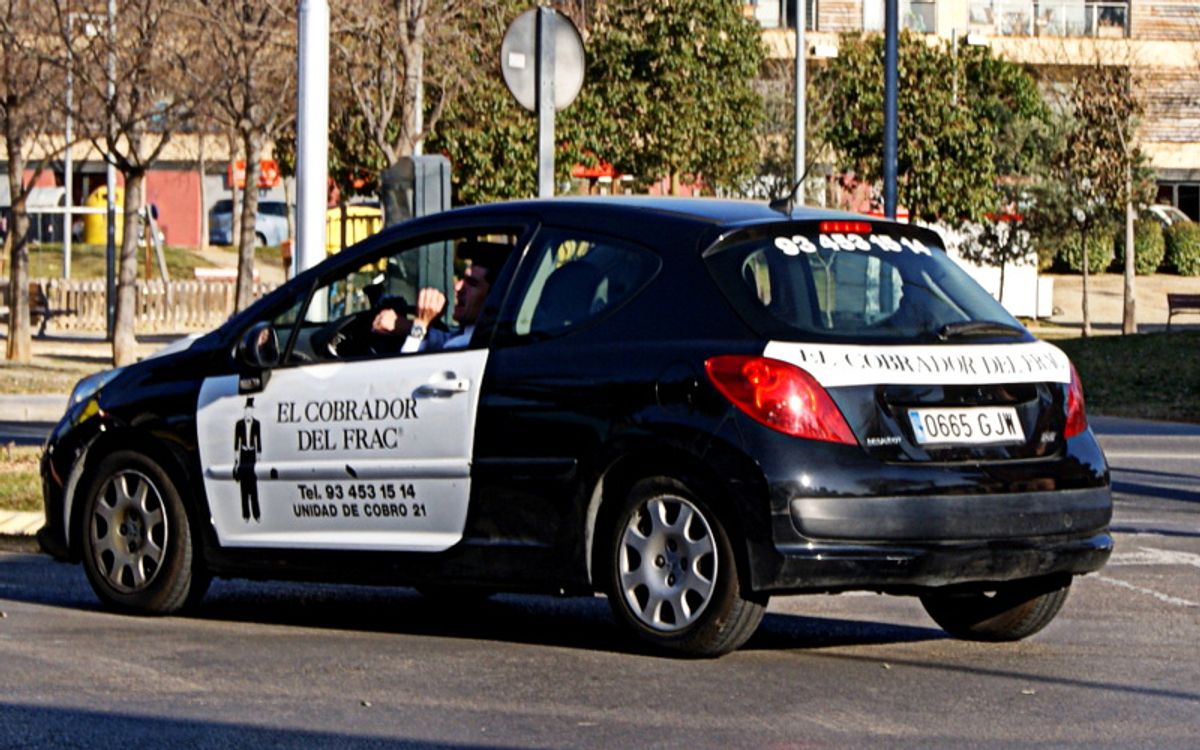 Shameless. That is the word on everyone's lips as each day more revelations surface about the venality and corruption of Spain's political and business class. And yet there is one sector of Spanish business that is predicated on shame. It is the cobrador del frac (the frock-coated debt collector), a peculiarly Spanish institution that is booming as thousands of businesses go to the wall.

It is a simple and powerful device. If you see a man dressed in a black frock coat and top hat, carrying a black brief case standing outside an office, a house or next to someone's table in a restaurant, you know that person has not paid their debts. In effect, they are being named and shamed.

"The figure of the cobrador is so well known he doesn't have to say anything," says Juan Lorca, manager of the Barcelona office of the Cobrador del Frac, a company that has branches all over Spain and Portugal and which has been chasing debtors for the past 25 years.

"All they have to do is stand there. They never speak to the subject. They never do more than hand the debtor our card."

Business has risen by some 40% over the past five years as more and more Spanish companies go to the wall. "We're one of the few Spanish companies where business is booming," Lorca says. He says the idea originated in Ecuador where a group of business people decided to shame their creditors into paying by having them pursued by a man dressed as a chicken.

As well as the frock coat, other debt-collecting agencies employ actors to dress up as monks, bears and bullfighters. Each carries a black briefcase with "debt collector" printed on it in large letters, lest anyone be in any doubt.

Lorca says almost all their clients are businesses owed money by other businesses. The debts involved begin at €1,000 (£861) and there is a special department that deals with debts in excess of €100,000. "We do have clients who are owed millions, and this is becoming more frequent," he says. They work either for a fixed fee or for a percentage of the debt recovered. He claims an 80% success rate.

The industry is barely regulated and their methods can border on harassment.

Aware of these criticisms, Lorca is quick to point out that they only pursue "people who are able to pay but refuse to pay. We don't pursue people who have no money, but people who may have concealed their money in fake companies for example."

He says this is one reason why people come to him rather than pursue their creditors through the courts. "The legal system isn't designed to deal with these labyrinths through which people transfer their capital to another company," Lorca says. "The law will pursue one company and its management, but if it sets up shop next door under another name, the law can't do anything."

Sending in the cobrador is a last resort, he says. "To begin with it's like any other negotiation. You meet and you try to come to an arrangement. But if all that fails, then we send out the man in the frock coat. These are people who have consistently refused to pay and only give in when subjected to unusual methods.

"Even for the most shameless people there will be some situation where they don't want the cobrador to appear. So we send him where it will do the most harm, usually his place of work, especially on the day when his suppliers or clients or financiers are visiting him. This usually encourages him to pay up."