For U.S. politicians, targeting drug users in black communities is easier than addressing poverty and unemployment 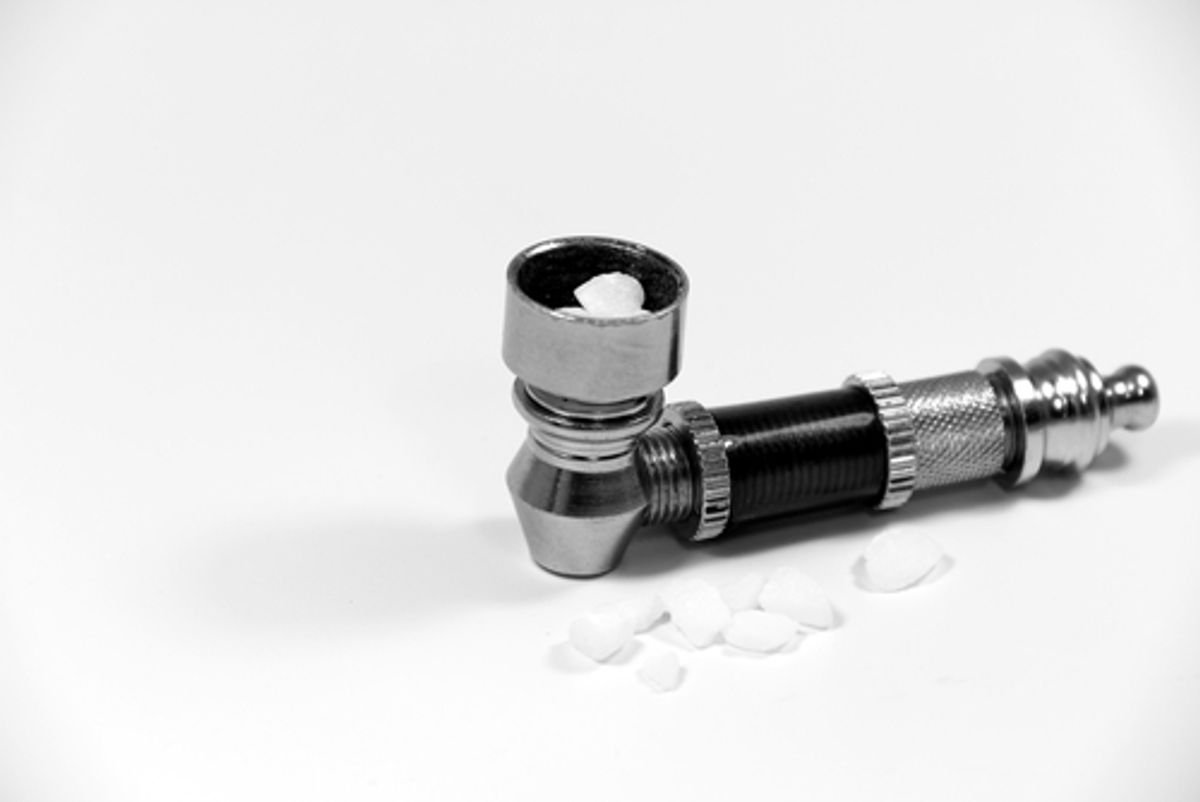 It's no secret that crack cocaine carries a stigma. While casual pot-smoking and cocaine use are tolerated in college dorms and clubs, crack cocaine is often considered to be on a different level -- a "hard" drug, like heroin. Few well-off people would casually do, or suggest trying crack cocaine, and if they did, they'd likely get a litany of concerned responses from friends.

Powder cocaine use, however, maintains an element of glamor; it's associated with the culture of elites, from socialites like Paris Hilton to Wall Street traders. Crack, many people think, is such a hard drug that using it once could cause a user to act recklessly, even dangerously, become addicted, or die. But most of the claims about crack cocaine's potential for destruction have proven exaggerated or flat-out false.

Crack rose to prominence in poor, black, urban environments (and not in the suburbs) not because of its overwhelming strength but because it was an affordable source of pleasure to communities deprived of basic resources. Crack caught on, certainly, but it did not ravage cities the way the media and politicians have claimed. Most people never become addicted, and those who do are likely vulnerable to the conditions in their environment that make addiction more likely.

Here are four myths about crack that arose thanks to drug war propaganda.

1. Crack in the ghetto. Despite racialized images of crack users, data from National Institute on Drug Abuse (NIDA) reveals that people reporting cocaine use in 1991 were 75% white, 15% black, and 10% Hispanic. People who admitted to using crack were 52% white, 38% black, and 10% Hispanic. From a rational perspective, these numbers should not be surprising: whites are, after all, the majority, and have a long-standing tendency to use drugs at rates higher than blacks. Nonetheless, in 2009, the U.S. Sentencing Commission released data showing no drug matches crack in terms of racially biased convictions. According to the data, 79% of 5,669 sentenced crack offenders were black, 10% were Hispanic, and only 10% were white.

As far back as the early 20th century, cocaine use by African Americans was considered a threat to the safety of white America. A 1914 article in the New York Times warned, "Murder and Insanity Increasing Among Lower Class Blacks Because They Have Taken to 'Sniffing' Since Deprived by Whiskey Prohibition." The article, by Dr. Edward H. Williams, proclaimed:

Most of the negroes are poor, illiterate and shiftless...Once the negro has formed the habit he is irreclaimable. The only method to keep him away from taking the drug is by imprisoning him. And this is merely palliative treatment, for he returns inevitably to the drug habit when released.

[Cocaine] produces several other conditions that make the "fiend" a peculiarily dangerous criminal. One of these conditions is a temporary immunity to shock -- a resistance to the "knock down," effects of fatal wounds. Bullets fired into vital parts that would drop a sane man in his tracks, fail to check the "fiend."

"In other words," Dr. Hart wrote of the passage in "High Price," "cocaine makes black men both murderous and, at least temporarily, impervious to bullets."

"What shook me" about the article, Dr. Hart writes, "was how similar the article was to modern coverage of crack cocaine in the mid-1980s." He continues, "The message is that that crack users are irretrievable...The terms inner city and ghetto are now code words referring to black people."

"The language is not as egregious in the '80s, but we all knew what it meant," Dr. Hart told AlterNet.

Dr. Hart points to the popular 1986 documentary "48 Hours on Crack Street" as an example of the racialized images of crack users. Even the New York Times noted the incessant focus on seemingly mentally unwell, poor black New Yorkers as the face of the crack trade. "We were meant to think the derelict was a crack addict; it was just as likely that he was an alcoholic," the Times remarked.

In "48 Hours on Crack Street," Dr. Hart says, "All the people selling drugs and misbehaving were black, and so when you associate these images with black people, the only conclusion a viewer can draw is that these are the people using these drugs."

"The main thing we did with those images is make people believe the real problem was crack cocaine. Crack was making these people behave so poorly, and in ways we found egregious," Dr. Hart told AlterNet. "So, if the real problem is crack cocaine, all you have to do is get rid of crack. You convince the people that all of your efforts have to be placed on ridding the society of crack. Now you don't have to deal with issues like unemployment, lack of skills, job training—all you have to do is say we're going to rid ourselves of this drug in our society....Nobody asked about whether people were employed, or responsible before crack cocaine, committing crimes before cocaine."

Dr. Hart points out that problems associated with crack—children raised by family members other than their parents, violence and unemployment—existed before the height of the so-called epidemic, and continue to plague the same communities today.

Plus, how ravaging can a substance be that, during its peak years, never exceeded an annual use rate of 5% among high school seniors? Dr. Hart points out that "The daily rate—the one most likely to lead to addiction—never exceeded 0.2%." But because so few Americns had tried the drug, sensationalizing it was even easier than say, marijuana.

2. Crack vs. coke. The only difference between the crack and powder forms of cocaine is the removal of hydrochloride, which allows for a higher melting point, and the ability to be smoked.

Crack cocaine is typically produced by mixing powder cocaine with baking soda and water over heat. The process removes hydrochloride and allows for an oily freebase of cocaine to float above the liquid residue. Separated, the freebase cocaine dries into a rock-like shape. But on a molecular level, crack and powder cocaine are still nearly identical.

What makes crack cocaine more potent is not its form, but the method by which it is ingested. As with other substances, smoking creates a quicker, more intense high than snorting.

Nonetheless, the law treats crack as if it were far more potentially damaging or threatening to society than powder cocaine. Before the Fair Sentencing Act of 2010, federal criminal penalties for crack treated 1 gram of the drug as equal to 100 grams of cocaine.

Now, the disparity has been reduced to a still large 18:1 weight ratio.

3. Crack babies. Recent research has found that claims suggesting crack-exposed infants would grow up with severe mental or physical deficiencies were exaggerated and misinformed. Amid a surge in crack cocaine's popularity and the doom-and-gloom media frenzy surrounding it, a 1989 study in Philadelphia found that the mothers of nearly 1 in 6 babies born in Philly hospitals tested positive for cocaine. Crack paranoia led to wildly exaggerated claims about "crack babies" (and villainized black mothers as "crack whores"), including a social worker's televised prediction that crack-exposed infants would not reach an IQ past 50.

Amid the hype, in 1989, Hallam Hurt, then chair of neonatology at Albert Einstein Medical Center and now a pediatrics professor the University of Pennsylvania, began a nearly 25-year study on the effects of in-utero cocaine exposure on 224 babies born at Einstein between 1989 and 1992. Half were exposed in-utero; half were not. All of them, however, came from low-income families, and almost as many were black.

"We went looking for the effects of cocaine," Hurt told the Philadelphia Inquirer, but the two groups performed the same on development and intelligence tests. They were both, however, underperforming compared to the norm. "We began to ask, was there something else going on?"

"Poverty is a more powerful influence on the outcome of inner-city children than gestational exposure to cocaine," Hurt told the Inquirer.

Still, she was not the first to draw such a conclusion. Doctors cannot tell the difference between crack-exposed and poverty-exposed infants. And among other studies, a 2001 comprehensive review of the effects of in-utero exposure determined: “[T]here is no convincing evidence that prenatal cocaine exposure is associated with any developmental toxicity difference in severity, scope, or kind from the [consequences] of many other risk factors.”

4. Crackheads. Even at the peak of crack's popularity, only between 10 and 20 percent of users became addicted—a rate similar to cocaine and other drugs. Users who do become addicted to crack are more affected by a combination of other factors, like a lack of positive reinforcement, financial stability, and a strong support network.

What's more, crack cocaine is not as unpredictable as some may think. Dr. Hart told AlterNet that claims that using crack for the first time can cause users to become addicted or violent are wildly imaginative. "We have given thousands of doses of crack cocaine in our lab, and we get predictable effects—increased drug dose, increased effects—and nobody has died or become violent."

As Dr. Hart explains in his book, any violence related to crack cocaine is more closely linked to the drug trade. In 1988 in New York City, for example, only 2 percent of crack-related murders were committed by addicts looking to score.

Crack does not make users sleepless bags of bones, either. "People have this notion in their minds that folks who smoke crack are very skinny, but it's actually a weak appetite suppressant," Dr. Hart told AlterNet, "The kids on Adderall are getting more of an appetite suppressant than cocaine."

Challenging the myth that crack causes users to go days without sleep, Dr. Hart said, "Certainly, when you smoke or take it, initially you'd be alert...But it's one of the best drugs to take and party at night because you can actually go to sleep."

Dr. Hart explained that the half-life for crack cocaine is less than an hour, whereas amphetamines and marijuana have half-lives up to twenty-four hours. "The pharmacological effects are short-lived, so notions about appetite suppression and decreased sleep for long periods of time is just not consistent with pharmacology."