Beating the heat doesn't have to be an energy suck. There's a better way to stay cool, as many cities are learning 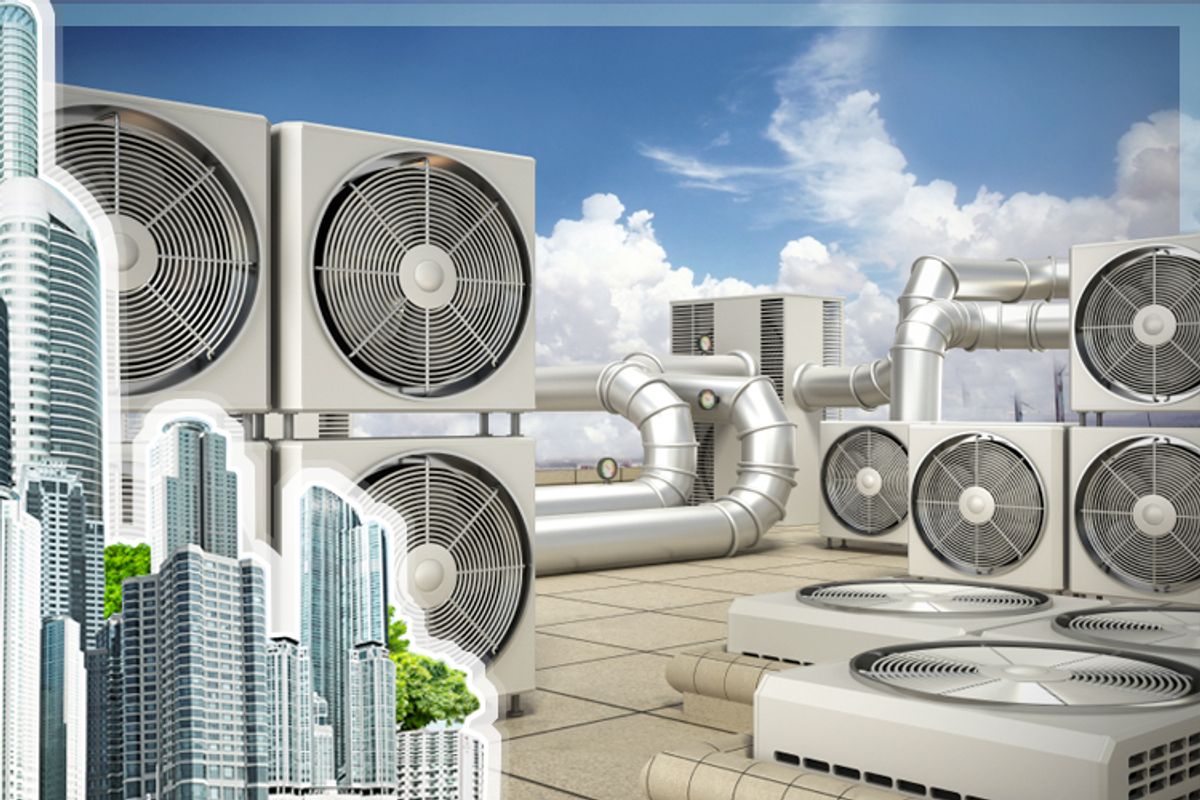 On August 14, 2003, 10 years ago this Wednesday, the power went out in eight U.S. states and the Canadian province of Ontario. Fifty-five million people were affected, from Ann Arbor to New Haven, Baltimore to the Hudson Bay. At the time, it was the second-largest blackout in history.

The immediate cause of the disaster was banal: a glitch in the alarm system at the FirstEnergy power company in Ohio. But behind that malfunction lay a power system overloaded by summer energy use, and in particular, dragged down by the burden of air conditioning.

The statistics of A/C consumption in the United States are staggering. According to Stan Cox, the author of "Losing Our Cool," we use about as much electricity to cool our homes and offices today as we did for everything in 1955. In large cities, air conditioning can account for a full third of electricity use during the hottest summer months. Ten percent of global electricity is used for air conditioning, and with the trifecta of global warming, urbanization and rising global standards of living upon us, air conditioner use is set for a growth spurt. As a 2009 paper by Michael Sivak points out, 38 of the world's 50 largest cities are in the tropics. The potential required cooling energy for Mumbai alone could equal 24 percent of the demand for the entire United States.

It turns out there's a better way to cool down buildings: Make cold, like gas and electricity, a municipally distributed good. In dozens of cities around the world, air conditioning, in the form of ice-cold water, is piped beneath the streets like drinking water. All a building has to do is tap in.

The technology, called district cooling, is not new – one such system in Hartford, Conn., turned 50 last year – but its use is booming. At the vanguard of the movement are cities with a source of cold that remains so through the summer months: deep water. Like a swimmer taking a dip, cities are using cold water to cool off.

Waterfront Stockholm, despite an average July high temperature of 72 degrees, is a case study in cooling, a pilgrimage site for engineers, energy executives and mayors from all over the world. It's not just that Swedes like to crank up the A/C: Modern office buildings, packed with heat-emitting people, lights, computers and mechanical equipment – and sealed from outside air – often require air conditioning year round. They heat up even during a Swedish winter.

In the early 1990s, Stockholm collaborated with Finnish energy company Fortum to construct a system that would deploy seawater to cool buildings in the downtown core.

Today, Stockholm has over 150 miles of cold-water pipes, the longest district cooling system in the world. Frigid water (43 Fahrenheit), drawn from 100 feet below the surface of the Baltic Sea, absorbs the heat from malls, office buildings and data centers. By the time that water has cooled downtown Stockholm, its temperature has risen to 61 degrees. Stockholm’s district cooling is twice as electrically efficient as normal air conditioning, and in a country with a high electricity tax, that makes it considerably cheaper for participating buildings.

Such systems have other advantages, too, driven by economies of scale. The city of Paris, where the total output of district cooling rivals that of Stockholm, now uses water from the Seine to run over 80 percent of its central chilling sites. Only in the winter months is that water naturally cold enough to provide what's called "free cooling," but the city still uses 35 percent less electricity than an equivalent system of stand-alone units. And because Paris freezes the water at night, it shifts electricity use off of the overburdened daytime grid. At a Swedish cooling conference in 2009, Climespace, the company that runs the Paris network, estimated that it reduces the greenhouse effect by the annual equivalent of 58,000 tons of CO2 [PDF]. That's the equivalent of taking 11,000 cars off the Périphérique each year.

When we think about urban climate control, the vision is often more glamorous than a network of pipes. Buckminster Fuller famously imagined shielding Midtown Manhattan with an enormous transparent dome, and the concept retains its appeal in the popular imagination, resurfacing in (spoiler alert) movies like "The Truman Show" and the T.V. show "Under the Dome." In 2009, a dome was proposed as an environmental panacea for downtown Houston. None of these ecologically regulated worlds has come to fruition, and we are left with places like Krausnick's Tropical Island Resort, Cornwall's Eden Project and Ski Dubai.

Yet despite our inability to live up to science fiction's visually appealing expectations, citywide temperature distribution began nearly 150 years ago, with the steam pipes of tiny Lockport, N.Y. When New York Steam brought centralized steam heating to New York City in 1881, the 225-foot-tall boiler plant was one of the city's tallest buildings, and the concept of piping steam beneath the city streets to heat buildings was thought innovative enough to run on the cover of Scientific American that November.

District heating is now relatively common in densely populated urban areas. In Copenhagen, which has one of the most extensive networks in the world, district heating warms 98 percent of the city. Because of its environmental and economic efficiency, district heating has been a priority of forward-thinking city planners from Tokyo to Reykjavik.

Now, it's district cooling that's hot. Downtown areas provided with district heating a century ago have begun to hook up to centralized cooling systems, motivated by improved cooling technology, the ban on CFCs, high electricity bills and growing environmental awareness. From Japan to Dubai to Chicago, district cooling is more popular than ever.

Why doesn't every hot-weather downtown have this technology? The answer, of course, is money. No city or company will undertake the project unless it can turn a profit, and pipes and cooling plants are big infrastructure. They can take decades to produce a sizable return on investment. Unless you live in a district cooling-friendly dictatorship, like Singapore, neither environmentalism nor electrical efficiency gets stuff built. Cities and companies need to translate those rewards into profit for investors, voters and boards.

It’s typically not something a city can do alone. "I don't see cities themselves undertaking the construction," says Thornton. "Cities can be a champion, a host, and help organize the market. They can send signals to development companies they prefer for building owners to subscribe to a system like this. But it's a capital-intensive undertaking." Stockholm's cooling system, which turns 20 next year, is "just starting to pay off," Christer Boberg, a product manager at Fortum, told me this week. Plans for a seawater cooling system in Honolulu have been slowed by financial difficulties.

It can also be hard to make a solid financial case when the future of electricity costs is so cloudy. “You don't know what those electric rates are going to be in the future,” Edwin Cowen, a professor of civil and environmental engineering at Cornell University who sits on the advisory committee of the cooling project there, told me. “What will the energy mix look like in 2030?” If costs rise – or are helped along by a carbon tax – the timetable for a profitable cooling system could shrink from 20 years to five.

But while municipal governments tend to be reluctant to commit to long-term projects like district cooling, smaller and more nimble institutions -- like universities, medical centers and large private developments -- have embraced the concept. At the same time as Fortum was laying cold-water pipes under Stockholm, engineers at Cornell proposed a $55 million system to cool classrooms and labs with lake water.

Completed in 2000, the system transformed the existing underground cooling network at Cornell into what is nearly a perpetual air conditioning machine. Cold water from 250 feet below the surface of Lake Cayuga chills the university’s pipe system before returning, a few degrees warmer, to the lake. (You can read more about the technical details of the system at its web site.) Lake source cooling, as it’s called, represents an 86 percent reduction in campus energy use over the previous – already efficient – district cooling system. And unlike Stockholm, which must occasionally use heat pumps to cool Baltic Sea water during the summer months, Cornell is cooled entirely with lake water, all year round.

Because the most efficient district cooling systems make use of unique natural assets – like Lake Cayuga or the Baltic Sea – they are not easily replicated. But a pattern is emerging: if there’s deep, cold water near the city, it could be a good source of cooling power.

In Toronto, the system kills two birds with one stone. Toronto’s drinking water, which comes from deep in Lake Ontario, arrives in the city’s reservoirs at a 39-degree temperature that would make your teeth hurt. So Enwave, the company that developed Toronto’s district cooling system in 2004, uses it to cool some 25 million square feet of office space. Raised to reasonable warmth, the water is distributed to local reservoirs and from there to the taps of thirsty Torontonians. Metro Hall, a 27-story office building in downtown Toronto, saves enough power using Deep Water Lake Cooling to supply 300 homes. It is one of dozens of such buildings.

The city of Toronto, an investor in the project, sold its stake in Enwave last year for a profit of $100 million. The buyer? Brookfield Asset Management, a company whose properties in downtown Toronto passed on the system when it was first introduced.

They have since reconsidered.