Like his Shakespearean predecessor, "Breaking Bad's" antihero knows he's doomed but is powerless to alter his fate 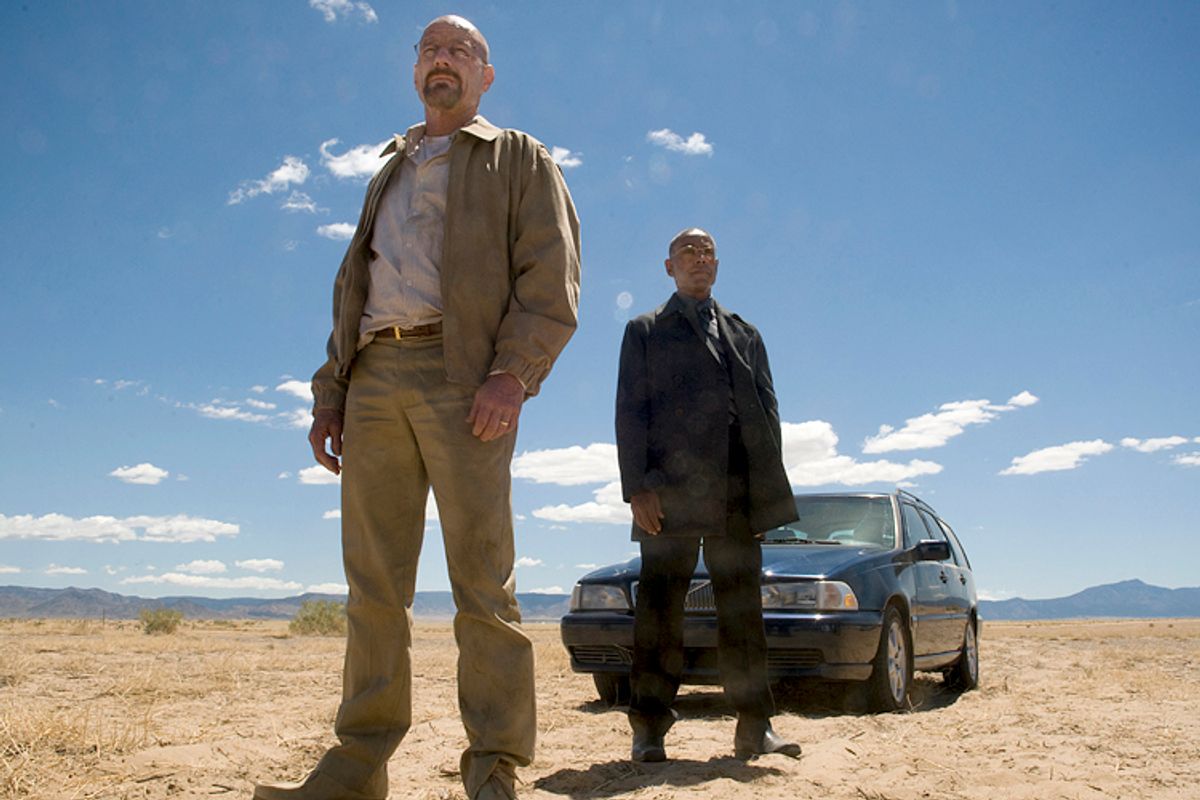 “…the common man is as apt a subject for tragedy in its highest sense as kings were… if the exaltation of tragic action were truly a property of the high-bred character alone, it is inconceivable that the mass of mankind should cherish tragedy above all other forms, let alone be capable of understanding it.”
~ Arthur Miller, “Tragedy and the Common Man,” 1949

FIFTEEN YEARS AGO I wouldn’t have argued that any television drama could stand alongside classic literature. I know, there are great shows we all like to watch again and again: I Love Lucy, All in the Family, M*A*S*H, but since HBO’s groundbreakingThe Sopranos, television drama has entered a golden age.

Much like the serial novel which reached heights of popularity in the Victorian era, weekly TV drama has dedicated followers. Either binge-watching or in delayed gratification, viewers are addicted to the episodic fix. The story lines stretch beyond the torrid affairs and soapy manipulations of gasping daytime entertainment. Questions of who is pregnant and who is sleeping with whom have been left to “reality” programming, clearing the way for nighttime television to move into the depths of human tragedy.

In the Aristotelian model, tragedy follows a hero of nobility falling to misfortune as the result of a tragic flaw. American playwright Arthur Miller’s work brings the drama closer to home with the common man assuming characteristics of the “great.”  Audiences, he said, “attribute to the well-placed and the exalted the very same mental processes as the lowly.”

Spartacus, with its epic bent, feels like the work of the ancient Greeks. Though Spartacus is a slave, he has the qualities of greatness: virtue, loyalty, wisdom. His story is rippling with revenge, bloodshed and the snapping threads of fate.  Breaking Bad, conversely, gives us a deeply-flawed protagonist. Cunning, desperate and deluded, Walter White is a working man facing his own mortality. In the early seasons, he sacrifices innocence to his growing megalomania. By Season 5, Walt has lost nearly all empathy – his and ours. Willy Loman, the delusional everyman of Miller’s great Death of a Salesman, is a low-brow King Lear in whom denial leads to destruction. Walter White is more Macbeth than Lear, going from someone we admire to someone we fear and pity. The five seasons of Breaking Bad even remind one of the five act structure of Shakespeare’s plays.

Now I may have Macbeth on the brain, having recently completed a New York run of my solo adaptation, but Macbeth’s trajectory parallels Walter White’s (Bryan Cranston) in several ways. Both men know that there is doom in the breaking of the law, whether that law is cosmic or man-made. Both men know good from bad and struggle with their choices. Both know there are consequences. Both have powerful wives who influence their decisions (though in vastly different ways.) Where Walt differs from the murderous Scot is in motive. As Breaking Bad opens, Walter White, chemistry teacher, husband and father, is in the grip of his lowliness. He is the opposite of high-born. Though gifted with genius, kindness and quiet nobility, he is dominated by his wife, squelched by his job, and restricted by his income. When he learns cancer has put him in the choking grip of fate, he “breaks bad.”

Ostensibly, Walt’s crimes have a noble purpose. Using his fierce knowledge of chemistry, Mr. White will provide for his family upon his death. It becomes clear in the pilot that his deeds are not purely altruistic. His real motivation is the reclamation of his manhood, some of which has been sapped by his controlling wife. Macbeth, similarly, finds his honor and valor challenged by his wife. But Walt’s challenge is a reflexive one; Skyler (Anna Gunn) is unaware of how her personality wears her husband down and it is Walt alone who goads himself forward. Macbeth, on the other hand, “has no spur” but his Lady to dig at his side and, in doing so, she pushes him into action. He’s just been waiting for the right signal. Walt is on his own from the start.

For every tragic character there is hamartia. (Hamartia, hamartia, hamartia!) Though there is debate about its exact meaning in the Aristotelian model, it can be described as a REALLY BAD DECISION that leads to the character’s downfall. It’s an act from which a character cannot return, setting his doom in motion. Sure, each season Walt has committed worse and worse deeds. Deciding to cook crystal meth isn’t exactly a volunteer day at a soup kitchen but Walt could still return to normalcy even after he and Jesse have begun to cook.  What I’m looking for is the psychological break in which Walt’s conscience oozes away – the moment in which Walt alchemizes his fate.

I think the tragic mistake is number #3, Mr. Gilligan. What about you?

What I’m waiting for in the final season is Walt’s awakening. The Greek term is anagnorisis: that moment when a character understands something he didn’t before. If Walt recognizes his own loss of conscience and is remorseful, he will have a noble end. But he may, like Macbeth, throw himself deeper into the abyss, believing that he has rendered his life meaningless through so many foul acts. Either way, Walt must have new understanding if Breaking Bad is to end with the excellence that has been its hallmark.

There’s no reason Gilligan need confine Breaking Bad to a stuffy, academic model but Gillian has, like Mr. White, combined his ingredients using a proven formula. The show is dazzling but it is, in a sense, nothing new. It’s one of the “seven plots” told and re-told through the ages. Gilligan has made this one seem fresh and he has set the bar unfairly high for television entertainment. I see a direct line: Sophocles, Shakespeare, Miller, Gilligan.

Whatever Gilligan has in store, I will be parked in front of my television, my inner theoretician silenced because the greatest literature is also the greatest entertainment.