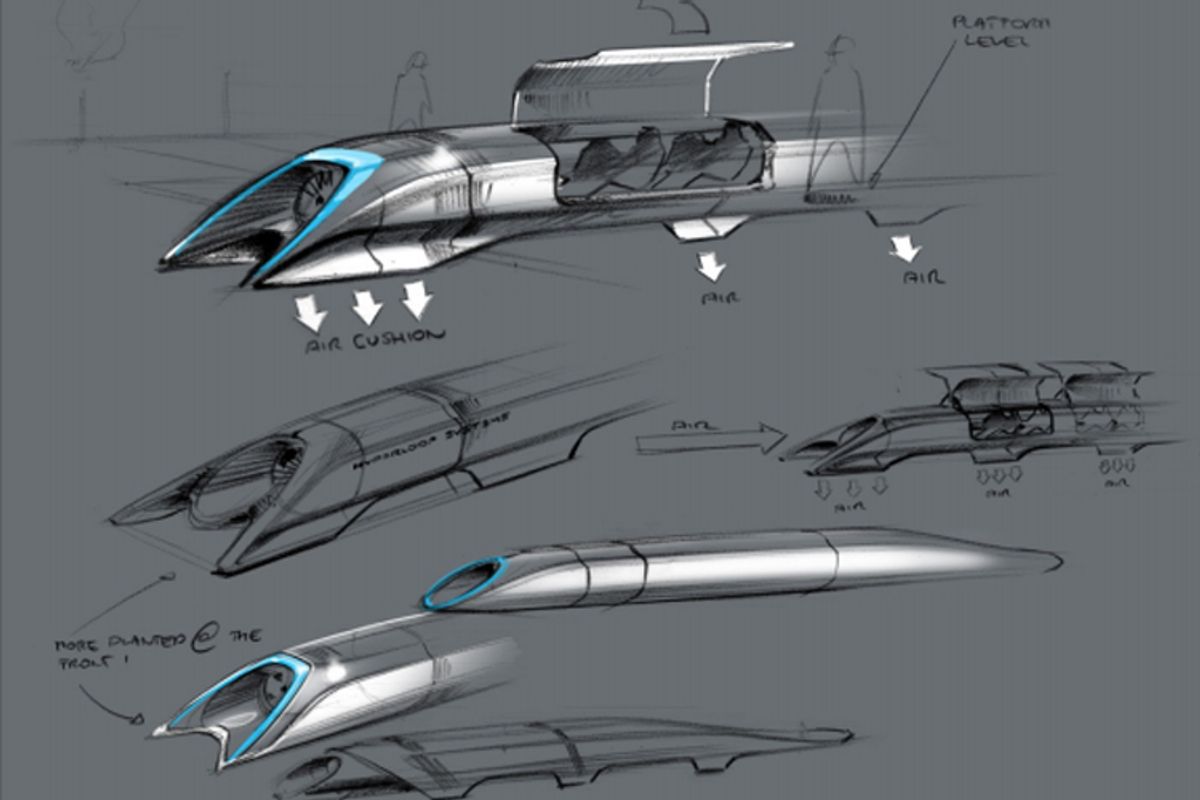 Tesla inventor Elon Musk has revealed his plans for a Hyperloop transport system that promises to zip residents of San Francisco to L.A. in 30 minutes: A set of elevated, low-pressure tubes in which "pods" on skis shoot along at 600 milers per hour. Oh, and, it is solar powered!

Hyperloop consists of a low pressure tube with capsules that are transported at both low and high speeds throughout the length of the tube. The capsules are supported on a cushion of air, featuring pressurized air and aerodynamic lift. The capsules are accelerated via a magnetic linear accelerator affixed at various stations on the low pressure tube with rotors contained in each capsule .Passengers may enter and exit Hyperloop at stations located either at the ends of the tube, or branches along the tube length.

If that sounds like science fiction, well, that's because, practically speaking, it is. Musk has no near-term plans to actually deploy this technology, and nothing like it has been built anywhere else. But according to Businessweek's Ashlee Vance, who got the scoop on Musk's plans before he posted a PDF to the Web, at least one scientist briefed on the scheme believes the technologies involved have all already been invented.

Musk's outline solves some obvious problems. One of the biggest: the question of land rights. By elevating the tubes and running them alongside I-5, the interstate that runs through California's Central Valley, Musk believes he can minimize the need to spend billions in securing landowner permissions. Farmers can drive their tractors right around the pylons that hold up the tubes.

Before you could finishing saying the word "hyperloop," Twitter exploded into a romp of "Hypeloop" snark.

No doubt, some skepticism is due. Musk's vision of a fantasy transportation system that is "safer, faster, lower cost, more convenient, immune to weather, sustainably self-powering, resistant to earthquakes, and not disruptive to those along the route" seems obviously too good to be true.

But can we restrain our knee-jerk cynicism just for one minute? One wonders, would James Watt have perfected his steam engine if Twitter had been around to mock him? Every day, my inbox fills up with emails from start-ups who want me to pay attention to some ridiculous new app that serves no useful purpose whatsoever. It's a delight to see someone thinking big, throwing bold ideas out for the world to stomp all over. Let's have some faith in the future. Shooting around California like packages in a pneumatic tube would be cool.

I would love to take a ride on a Hyperloop. I very much doubt that I will be doing so in California any time soon, but you know what? If the physics of this thing are feasible, I would not be surprised to see construction started on one in China by next summer. And if that happens, snark will transmute to envy before you can say the name "Elon Musk."