GOP’s rodeo of racism blows up 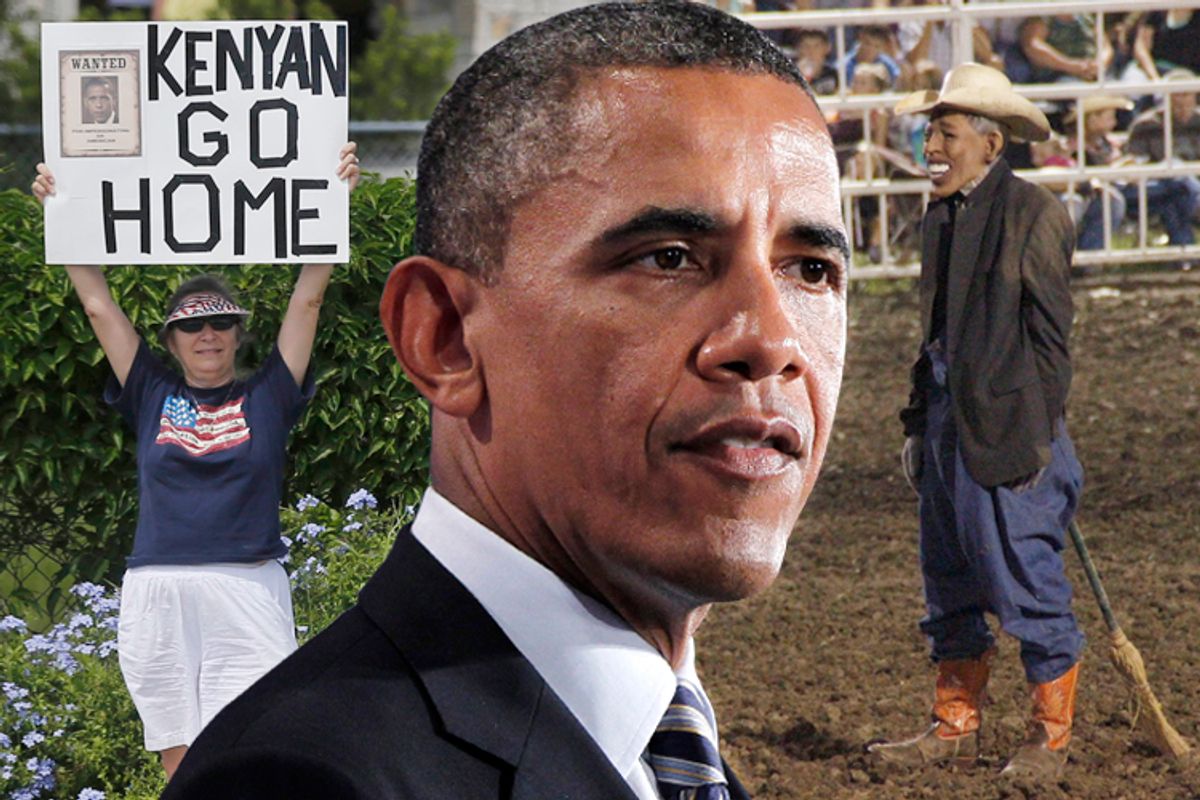 It’s been quite a week for anti-Obama racism. At the Missouri State Fair Sunday, rodeo fans cheered to see a “clown” in an Obama mask get run down by a bull. On Friday in Florida the president faced a gaggle of protesters on the way to address a disabled veterans’ group; one carried a sign reading “Kenyan Go Home.” Three days earlier, Arizonans protested Obama’s visit by singing “Bye Bye Black Sheep.” One man mocked him by calling him "47 percent Negro;" another held a sign that read, "Impeach the Half-White Muslim!"

Also on Sunday, the same day as the Missouri State Fair incident, ABC’s “This Week” hosted the birther-in-chief, Donald Trump, who was fresh from a visit to the right-wing Family Leadership Summit in Iowa and a golf outing with GOP House Speaker John Boehner. When Jon Karl asked him, “You don't still question [Barack Obama] was born in the United States, do you?" Trump let loose his tiresome birther spew. "I have no idea," Trump replied. "Was there a birth certificate? You tell me. You know, some people say that was not his birth certificate. I'm saying I don't know. Nobody knows and you don't know either, Jonathan."

With Republicans like Boehner and Iowa’s Family Leader embracing Trump as a loyal and treasured party figure, and mainstream media figures like Karl treating him like a legitimate newsmaker, it’s clear that the party, and some of the media, learned nothing from its 2012 drubbing. Reince Priebus’ infamous “autopsy” has itself gone wherever it is that fraudulent ideas go to die. Calling for more “inclusion,” the report didn’t outline policy change but rather better communication strategies to avoid repelling young voters, women, African-Americans and Latinos. “Our policies are sound, but I think in many ways the way we communicate can be a real problem," Priebus said in March.

But now they’ve given up even on changing the way they communicate.

It’s not just Trump; one candidate after another in Iowa demonized Obama, and/or his electoral coalition. Rep. Steve King, he of the “calves the size of cantaloupes” remark, told the audience to ignore guidelines on what churches can do politically and “go ahead and defy the IRS.” King is said to be mulling his own 2016 presidential run; we can only dream. Sen. Ted Cruz got big ovations for advocating the repeal of not just Obamacare but the IRS.

But the scary demagogue award has to go to Cruz’s father, Rafael, an immigrant from Cuba who accused Obama of trying to eliminate God and impose socialism on the U.S. After all, he’d seen it happen before. “A young charismatic leader rose up, talking about ‘hope’ and ‘change,’” Cruz yelled, as the crowd booed. “His name was Fidel Castro.” Got it? Obama = Castro. Cruz doesn't mention that he actually supported Fidel Castro's revolution against Cuban dictator Fulgencio Batista, then turned against him. Now we know where the Texas senator got his penchant for demagoguery and distortion. (Imagine replacing Marion Robinson in the White House with Rafael Cruz.)

Although the Iowa convening didn’t feature anyone in an Obama mask being chased by bulls, or “Kenyan Go Home” signs, and nobody sang “Bye Bye Black Sheep” to the president, it made clear that the GOP project of inclusion is a farce. Judging from Iowa, the 2016 primary field is set to be every bit as extreme as in 2012 but without even the patina of diversity provided by Herman Cain and Michele Bachmann. And it will play to an increasingly shrill and xenophobic primary base where three nasty racist anti-Obama events can take place in one week, with near-complete silence from Republican leaders.

I should note that the Missouri State Fair rodeo was so sickening that Republican Lt. Gov. Peter Kinder had to denounce it as “disrespectful” to the president, adding, “We are better than this.” Fairgoer Perry Beam told the Associated Press that “everybody screamed” and “just went wild” when an announcer asked if they’d like to see “Obama run down by a bull.”

“It was at that point I began to feel a sense of fear. It was that level of enthusiasm,” the 48-year-old white musician said. Another clown approached and began to play with the lips of the Obama mask. “There would have been no reason to play with his lips if he were a white president,” Beam said. “They mentioned the president’s name, I don’t know, 100 times. It was sickening. It was feeling like some kind of Klan rally you’d see on TV. I’ve never seen anything so blatantly racist in my life," he added. "If an old country boy picks up on something like that, imagine what a person of color would think.”

Meanwhile, John Boehner golfs with birther-in-chief Trump, while he headlines ABC’s respected Sunday news show. The GOP seems content to live on the fumes of Obama-hatred. It’s not a strategy for a post-Obama politics, but they seem to reckon there are enough rodeo clowns out there to get them through 2014.