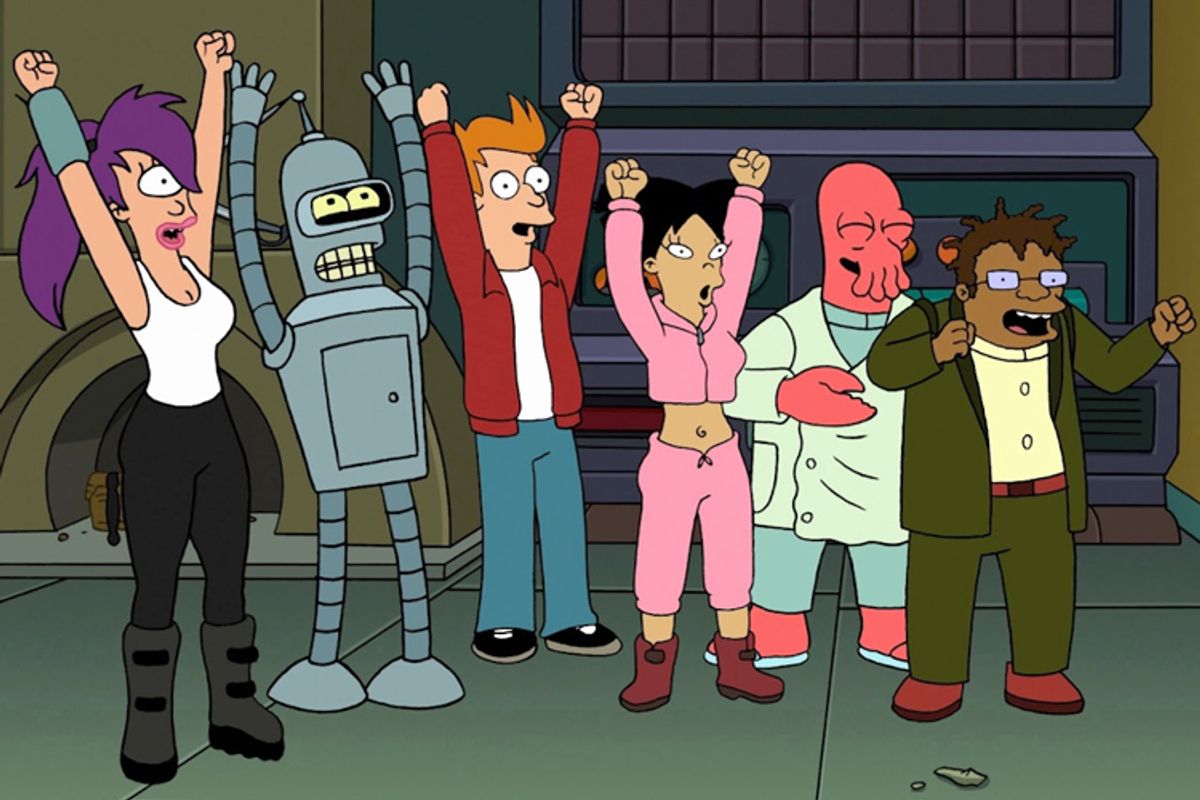 On September 4th, "Futurama" is over for good. The series experienced numerous fits and starts over its fourteen-year run, moving from Fox to straight to DVD movies to its current home of Comedy Central. In the first four years, "Futurama" gifted viewers with several classic episodes: “Luck of the Fryish,” a tearjerker that expanded upon main character Fry’s history; “Jurassic Bark,” another tearjerker that upped the sadness ante considerably with the inclusion of a cute dog; and “The Devil’s Hands Are Idle Playthings,” which was intended to be the series’ finale. These are regularly cited as the series’ high points, and while it’s all well and good to watch “Godfellas" or “Amazonian Women In the Mood” for the fifteenth time, other, less iconic episodes are just as worthy of a repeat viewing. Here are eight underrated "Futurama" episodes to revisit in advance of saying goodbye once and for all.

Futurama’s first season was impressively consistent for a show just finding its footing, and spawned many gems: “Fry and the Slurm Factory,” “The Series Has Landed,” and “Mars University.” But “I, Roommate” stands out in part for establishing the fast friendship between Fry and Bender that would last throughout the series’ entire fourteen years. It also debuts how stunningly stupid Fry can be; “hmm, must be a friend of theirs,” he remarks while watching a soap opera scene showing an evil looking robot spying on two protagonists.

While the animation lacked the richness of later years, and the voice actors haven’t yet honed in upon what would eventually become each character’s signature style—the professor sounds about 50 years younger and 50 times less eccentric than he does in the second season—the jokes are flawless. Between quips from Hattie, the elderly cat-loving landlord, who calls Fry a “young watchacallit” until she remembers the term she’s looking for (“—idiot”) to the character of “Boxy Robot,” the machine that beeps loudly to interrupt a wedding—“Is he objecting or backing up?” “Looks like both.”—this episode introduces a host of reoccurring minor characters while simultaneously developing main ones. It’s good to see all of these old favorites in their earliest days, and remember how excellent they were straight out of the gate.

An ocean fishing trip results in the Planet Express ship (with the entire crew on board) being hauled down into the watery depths, occasioning a shamelessly geeky joke about how many atmospheres of pressure the vessel can withstand.

Once below, the crew discovers the lost city of Atlanta, where humans evolved into mermaids thanks to the Coca Cola bottling plant’s chemicals, and folk rock troubadour Donovan represents the tourism commission:

This episode contains eminently quotable lines like “He might have ocean madness, but that’s no excuse for ocean rudeness” as well as plenty of blue humor. (“I can’t swallow that!” “Well then good news! It’s a suppository.”) Between poking fun at Atlanta’s conviction that it’s a cosmopolitan city and the nonstop jokes about Fry peeing in the water, it’s as likely to offend as to amuse. But if you can’t appreciate Fry breathing underwater out of a trash bag full of air, and later having to sever ties with Dr. Zoidberg in order to join the local country club, you’re probably not someone who liked Futurama in the first place.

Hands down the most underappreciated episode on this list, “The Problem With Popplers” takes on arguments about ethical eating with the series’ characteristic nuance and irreverence. When a delicious new snack food is revealed to be an alien species’ highly intelligent young, Leila takes up protesting the sale of so-called Popplers, which she herself discovered while returning from a delivery. The militant vegetarians who opposed Poppler consumption from the start offer endless opportunities for ridicule. “We taught a lion to eat tofu!” is one of my favorite moments, and of course it comes with a cutaway to the world’s sickliest looking lion.

When one protestor shouts, “you can’t own property, man, “ the professor replies “I can. But that’s because I’m not a penniless hippie.” Later, the same hackey-sack player is introduced on TV as a “noted anti-eating activist”.

The Poppler theme song is a master class in cute silliness, and presages other later in-show songs like the sublimely inane New Justice Team theme. This episode also deserves love for further showcasing alien harridan wife NdNd who growls “would you like some human with your salt?” at her husband as he seasons his meal.

This episode may be overlooked in part because the movie it spoofs didn’t have much cultural staying power. But even if you’ve never seen “The Cider House Rules” (I haven’t) the storyline, which has Bender adopting a bevy of orphans, includes plenty of inspired lines such as the “orphanarium” warden’s, “keep adoption in mind. It’s a great way to have kids without having sex.” This episode is impressively dark underneath the jokes as it touches on bullying years before bullying became the freighted phenomenon it is today. Leela comments that her reunion is going well because, unlike when she was growing up, “no one’s tried to burn me” and in the class picture we see her ostracized from the group “over there in cootie town.” Bender’s adopted kids provide less heavy levity when they shout, “our daddy’s a giant toy!” and climb out of his chest cavity asking, “Daddy, how do I flush you?”

Another reason this episode doesn’t get much appreciation probably has to do with its centering of Leela. (Bender’s orphans are actually the B story.) Particularly in these early seasons, Leela-centric plots are reliably dull and frustratingly focused on her romantic endeavors. Here, the best punch line from her brief relationship with a shallow doctor isn’t even dialogue: “Yes, we have looking at trees!” reads the sign at the Arboretum where they go for a date.

This episode shamelessly capitalizes on the endless well of 80s nostalgia, to devastatingly hilarious ends. Frye meets a businessman who was cryogenically frozen at the height of Reagan’s reign and is ready to bring all of his American Psycho + Wall Street energy to the failing business that is Planet Express. From uttering nonsense phrases like “enchorito” and “dollar jockey,” to mixing shark and sheep metaphors (‘I’m proud to be the shepherd of this herd of sharks,”) the character of That Guy is a pitch perfect spoof of executives powered by greed, fast talk, and amorality.

It also gives us the endlessly amusing concept of “boneitis,” a lethal disease that would have been cured were it not for That Guy’s hostile takeover of a drug company.

To make things even better, the show opens with an appearance by the always welcome Hattie, old maid and holder of one share of “Planet Kajigger” who creakily announces at the annual meeting, “I move that everyone comes to my home and snuggle my cat.” As with many comedy series, once the premise has been established and the main characters brought together, the ostensible reason for their being in one another’s lives isn’t revisited much. Examining Planet Express as a business allows for such meta-humor as Bender’s declaration that, “I don’t even know what we do. Nah, just kidding… What are we, like a bus or something?” It’s awesome to the max.

"Bender Should Not Be Allowed On Television"

The episode begins with Bender throwing a beer bottle at a kid’s head and it just gets better from there. (Don’t worry, he misses. Also, it’s only animation.) Through heckling and well-placed self-promotion, Bender lands a spot on the popular robot soap opera “All My Circuits” and promptly behaves in the most reckless and obnoxious ways possible, including lighting his body on fire while yelling, “kids at home, try this!” In spite of the lack of facial detail, the slack-jawed shock of the production crew watching Bender’s antics earns one of the best laughs in the episode.

Predictably, soap opera conventions are a goldmine of joke fodder. One actor warns the others that after learning his terrible secret, they may experience a bout of “explosive amnesia.” Network bigwigs are also skewered, with the senior laptop executive sending electric pulses to three other robots to make them laugh at his jokes, and wondering of their middle America audience, “will it make them get off their tractors?”

By now you might be picking up on what could be called my Bender prejudice, but there’s no denying the greatness of this episode. Bender poses as a fembot in order to compete against other female robot athletes in a professional competition, allowing for plenty of the tongue-in-cheek sexism that Futurama excels at. (For female robots, Olympic-level bending consists of them taking on thin wire hangers, and when Bender uses a coaster, the professor exclaims, “the femzoil must be sashaying girlishly into your processor.”) As Bender enthusiastically embraces the most clichéd expressions of femininity, lecturing Leela and Amy that “men love it when you really glob [lipstick] on,” he attracts the attention of TV star Calculon and eventually comes to love him.

There are endless quotable lines here, but underneath the nonstop jokes are some interesting implications about gender politics. Bender wins Calculon’s heart because of how well he “understand the male mind” but it’s all with the express purpose of manipulating Calculon for expensive gifts and glamorous dates, something Amy and Leela scold him for. Even after Bender’s hardware has been fully restored to male, he still feels tenderly towards Calculon, though he publicly toes the masculine party line with comments like “emotions are dumb and should be hated.” At least one (probably inadvertent) progressive moment occurs when Amy complains to Bender that he’s “making [women] look like jerks in front of the other genders.” Who knew a show airing on Rupert Murdoch's network would be genderqueer friendly?

Later seasons of the series never fully regained the original run’s wit and rhythm, though diehard fans probably overlooked the most tepid episodes out of sheer gratitude for more time with their beloved characters. But some episodes succeeded in hitting the mark and rose to match Futurama’s former greatness. “Prisoner of Benda” recalls “Three Hundred Big Boys” in its interwoven storylines, all of which proceed from the crew switching bodies with each other and a cast of supplementary characters including a robot wash bucket in love with a janitor, and a rich robo-royal.

To the obvious delight of the show’s writers, returning each mind back to its correct body requires extensive math work, displayed proudly on a chalkboard at the show’s end.

Much of the humor here comes from visual jokes, as characters in new bodies still move as if they’re in their own, but there are also several excellent non sequiturs, such as when the robot emperor asks “if you’re a bending unit, why are you full of fetid water?” and Bender, in the form of the wash bucket, replies “if you’re an emperor, why don’t you shut up?”  And it wouldn’t be classic Futurama without a few gross-out moments, which the love scenes between Leela as the Professor and Fry as Zoidberg provide in abundance.

Enjoy these laughs while you can, because given the show's solid track history of yanking on heart strings, the series finale will be a weepy affair!