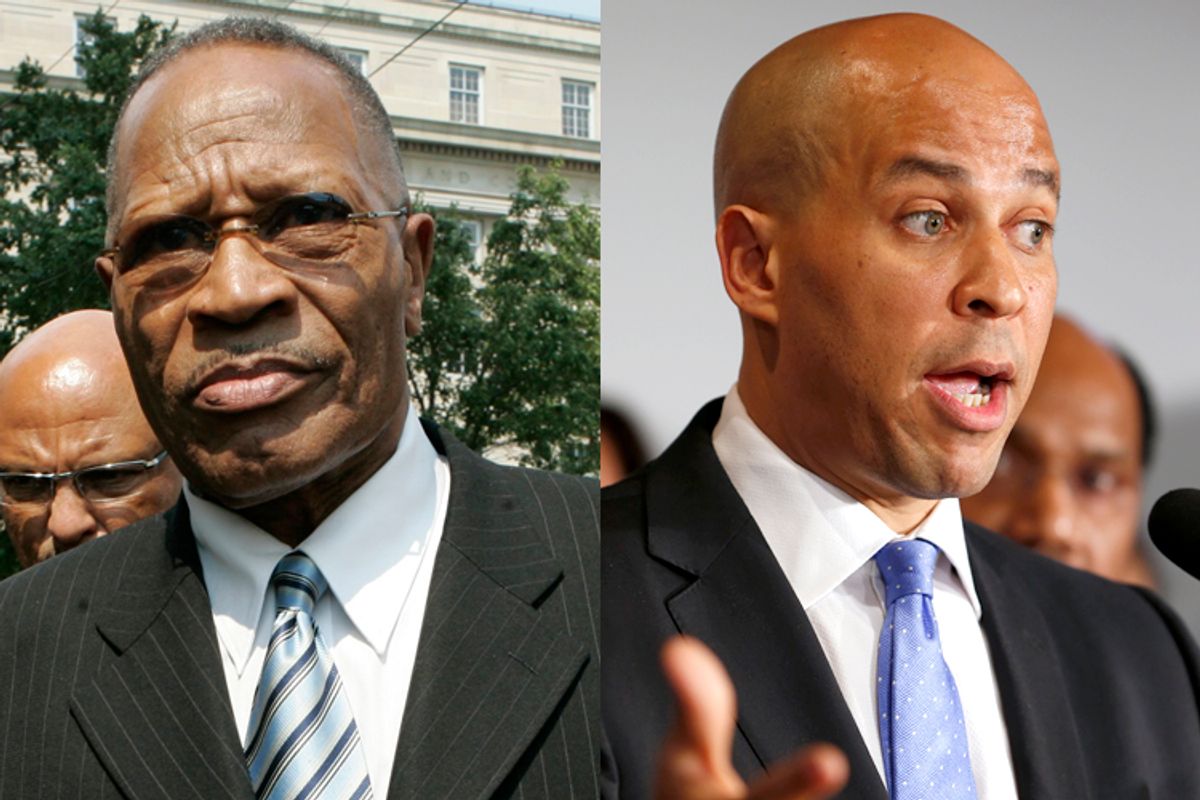 Today's U.S. Senate primary in New Jersey is - like so many elections these days - a representation of many of the most destructive trends that define modern politics. It is, for instance, a case of politics as a celebrity-driven coronation - one where one candidate's media- and Twitter-driven celebrity (Cory Booker) is depicted as more important than other candidates' far more impressive public policy experience. It is also a commentary on how such a celebrified politics tends to intensify when voters are paying the least attention. As the Progressive Change Campaign Committee's Adam Green notes, this most certainly is "a low-information, low-turnout primary in an expensive TV market being decided on star power" alone.

What's perhaps most significant, though, is how this sleepy special election so perfectly captures the now-pervasive assumptions made about the fundamental notion of corruption. More specifically, it exemplifies the horrifying assumptions the political class makes when deciding what to deem disqualifyingly corrupt and what to deem business as usual - and, thus, politically savvy.

Booker's career is the best example of the assumptions at work. He first jumped onto the political stage by helping turn his campaign against then-Newark Mayor Sharpe James into a critically acclaimed documentary about the problem of municipal corruption. In "Street Fight," Booker is depicted as the earnest clean-government insurgent and James as the uber-corrupt machine politician. Ultimately, as the Huffington Post reports, James was indicted and imprisoned on charges that he used his office to enrich himself and to "steer city-owned land to his one-time mistress." For that kind of old school graft, he was held up as the icon of corruption by, among others, the New York Times, whose editorial board slammed him for "exhibit(ing) a finger-in-the-eye arrogance" and then lamented "a sad career arc for Mr. James, who was originally elected as a reformer."

In that same editorial, entitled "The People vs. Sharpe James," the Times (echoing similar sentiment in so much of the elite media) lauded Booker for being willing to "take the city in a different direction" when he defeated James at the polls in 2006. But over the next few years, Booker began mimicking James' moves to use the Newark mayor's office to enrich himself in a sad story that lives up to The Who's "meet the new boss, same as the old boss" lyric.

That's right, Booker did not just raise massive amounts of campaign money from the thieves on Wall Street and then attack President Obama on behalf of those thieves. He did not just orchestrate a secret $100 million deal with Facebook CEO Mark Zuckerberg that the Washington Post notes was designed to help those donors circumvent the public and "remake (Newark) public schools in the way they want to." On top of all that, he also leveraged his municipal office to personally pocket hundreds of thousands of dollars in corporate speaking fees. Additionally, in a move that makes James' larceny look altogether quaint, Booker convinced his tech-industry backers to bequeath him an entire company - and then tried to prevent the multi-million-dollar gift from showing up in campaign disclosure reports.

Notably, the Times did not respond to Booker's antics with a "People vs. Cory Booker" editorial citing his James-esque - and James-exceeding - corruption as evidence that too many powerful interests have bought his potential U.S. Senate votes, nor did the Times publish an essay lamenting "a sad career arc for Mr. Booker, who was originally elected as a reformer." On the contrary, the paper perused the record and cheerily endorsed him for U.S. Senate, citing his "coziness with moneyed interests" as an "asset." It then responded to the stunning revelations about Booker's company with a follow-up apologia declaring (without any evidence, of course) that Booker "has a strong record on ethics reform" and that his mayoral term enriching himself somehow proves he would be a "voice for the urban poor."

Such a divergent reaction to James and Booker - which, again, was characteristic of the framing throughout the political media - cannot be explained away only by perceptions of legality. After all, it is hardly clear at this point that political patrons are legally permitted to circumvent campaign finance statutes by simply giving their favored public officials multimillion-dollar tech companies. No, this double standard, which now suffuses so much of American politics, is rooted in ugly class biases and power calculations.

James was a working class ward politician whose Tammany Hall-style crimes were comparatively petty. That made him the type of public official that is regularly lampooned in the entertainment world and typically derided by elites as icons of what Time's Joe Klein infamously called "the angry hot-house of inner-city" politics. That nasty code - "inner city" - also extends to James' corruption. His crimes were portrayed as decidedly "inner city," involving sums in the low thousands from mostly local cronies rather than national elite powerbrokers.

By contrast, Booker has a different public image. With a suburban upbringing and Oxford pedigree, he has carefully crafted a political image that is pro-Wall Street, "new economy"-ish, proudly worshipful of wealth - and decidedly not "inner city." Indeed, as one tech entrepreneur told the Times in explaining why Booker's wealthy tech donors gave the Newark mayor a company, "It feels like he's one of us."

The same goes for Booker's money: it isn't the much-denigrated Inner City Graft, it is the much-vaunted Mahogany Paneled Conference Room Graft from rich dudes in bucolic places like Silicon Valley.

Such white-collar graft comes not in four-digit wads of cash, and doesn't go to ward bosses like James. It instead tends to come in five, six or even seven digit checks and stock certificates to professional politicians who use anodyne terms like "public-private partnership." Importantly, the money in the latter form of corruption doesn't come from local parochial hundred-thousand-aires easily punished when things get a bit too embarrassing. It tends to come from mega millionaires and billionaires with the same pedigree and elite credentials as Booker - and those aristocrats rarely ever get punished, lambasted or humiliated with the "corruption" label because they own much of the media and most of the political system.

The result of the double standard is the oxymoron whereby the kind of cash-in-the-envelope corruption James embodied is routinely vilified, ridiculed and prosecuted, while the kind of stock-options-in-the-portfolio corruption Booker evinces is completely ignored, trumpeted as smart politics, and/or openly touted as an "asset."

In this new Gilded Age, this double standard between what is seen as acceptable and unacceptable corruption is hardly exclusive to New Jersey.

At the presidential level, for instance, John Edwards has been tarred and feathered for (among other things) allegedly taking $350,000 from his wealthy patrons. Meanwhile, Hillary Clinton is touted as an ascendant presidential candidate as she and her husband vacuum up tens of millions of dollars on the speaking circuit from corporate interests who will have business with a prospective Hillary Clinton administration.

Similarly, in Congress, Louisiana Rep. Bill Jefferson was universally derided in Inner City Corruption vernacular for his cash-in-the-freezer bribery scandal. Meanwhile, John Boehner was ascending to House Speaker through a political action committee that, according to Rolling Stone, "spent almost $83,000 on golf events in 2009, (ran) up a $67,000 tab at the Ritz-Carlton resort." Boehner also "flew on a corporate jet 45 times between 2000 and 2007, and took at least 41 other corporate-sponsored trips in the past decade." But because Boehner's corruption was the Mahogany Paneled Conference Room kind, it was seen not viewed through the same prism as Jefferson's corruption, and it was not seen as a hindrance to his ascent.

At the municipal level, there is a similar dichotomy. In Chicago, for instance, Rep. Jesse Jackson, Jr. has been held up as the epitome of corruption for using $750,000 in campaign funds on personal luxury items. Meanwhile, the Chicago Tribune reports that Mayor Rahm Emanuel is "maneuvering around state law" and violating "his own executive orders banning contributions from those who have or are seeking city business" by "repeatedly tak(ing) donations tied to people and firms in pursuit of contracts from his administration." But while Jackson is derided in the vernacular of Inner City Corruption, the elite-connected Emanuel is lauded for his "prowess raising political cash."

Then there is New York, where the double standard has reached truly epic proportions.

In that state, New York Gov. Andrew Cuomo has been able to publicly position himself as a hero against the cash-in-the-envelope corruption scandals that have engulfed the state's inner-city politicians. Rarely mentioned in the hagiography about his supposed anti-corruption crusade is the fact that this is the same Cuomo who set up a slush fund to solicit massive corporate donations and signed a tax law that conveniently benefited one of his big financial backers. Why aren't Cuomo's own anti-corruption bromides applied to the incumbent governor? Because his corruption is on a larger scale, considered higher class and connected to real power - and so a political and media establishment that respects that class system and that worships that power structure presents it simply as smart politics.

Same thing with New York City Mayor Michael Bloomberg. He has garnered great press self-righteously deriding Albany corruption. Yet, Bloomberg's history of buying and selling politicians and political parties rivals that of Boss Tweed. Indeed, as the New York Times' Michael Powell bravely noted in one of the only articles ever to highlight the double standard, "Few have done more to feed slop to the worst actors in this system than our mogul mayor." But because Bloomberg is a billionaire media titan, the mayor is depicted as a benevolent anti-corruption patriarch, and his own unscrupulous use of money in elections is presented - if at all - as good politics.

Of course, this isn't to make a "two wrongs make a right" argument, nor is it to defend the aforementioned politicians who have been prosecuted and publicly shamed. However, it is to spotlight a problematic double standard whereby relatively small individual acts of corruption are somehow portrayed as far more problematic than much bigger and more destructive systems of corruption.

As illustrated by these and countless other examples, that double standard is not some accidental phenomenon - it is a carefully constructed instrument of deception.

Just as high-profile prosecutions of comparatively small-time crooks like Bernie Madoff are designed to convince the public to believe financial crime is being combatted even when it isn't, the focus on small-time political corruption is designed to create the illusion that America isn't a full-on griftopia - even when it most certainly is.

In this illusion, the Jameses, Edwardses, Jeffersons, Jacksons and small-time crooks in Albany are the biggest forces of evil doing the most harm to American democracy through their multi-thousand-dollar scams - not the hordes of well-groomed lobbyists, high-class corporate executives, well-paid fundraisers and elite politicians who have made a multi-billion-dollar industry out of buying and selling influence.

In this illusion, the only crime is engaging in corruption schemes that are too minor, too local and involve too few of the untouchable super-rich who control national politics.

In this illusion, in short, the safest path to high office is the one Cory Booker has chosen - the one that relies on self-enriching corruption schemes that don't dare make the political mistake of being too small.